We're proud to announce a new partnership with one of our favorite online film journals, cléo. Every month, cléo will be presenting a great film to watch on our video on demand platform. In conjunction, we'll be hosting an exclusive article by one of their contributors. This month the journal's founding editor, Kiva Reardon, writes on Nathan Silver's Exit Elena, which is available to watch starting June 28 in the US, Canada, UK, Australia, New Zealand, Italy, Norway, and Germany! 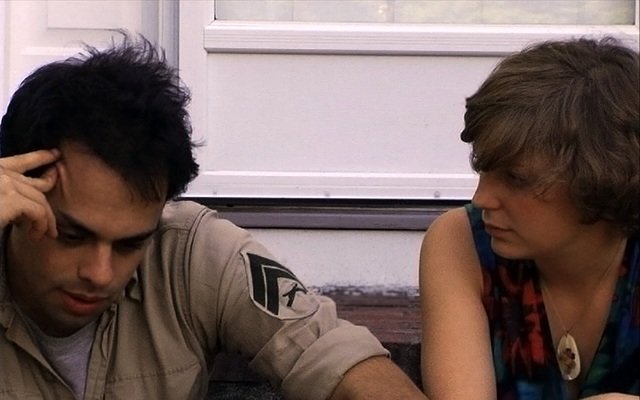 I need not sell my soul to buy bliss.
—Jane Eyre, Jane Eyre

Gothic fiction dates back to 1764 with Horace Walope’s The Castle of Otranto. Unlike the lush Romantic novels that had come before, here the supernatural plagued the lead characters and darker thematics prevailed. Walpoe’s book, in addition to being a bestseller of the time, paved the way for the greats of Gothic fiction to come: Mary Shelley, Edgar Allan Poe and Bram Stoker. While these tales of vampires and ghouls formed the cornerstones of the genre, at the same time a sub-set of this literary trend developed: the Female Gothic. In these novels, female protagonists took centre stage (or page) and often found themselves haunted in their homes, trapped by the walls that were supposed to protect them. The best-known example of such came to be Charlotte Brontë’s Jane Eyre (1847). In this proto-feminist tale, the titular orphan takes a position as a governess at Thornfield Hall and, against a backdrop of eerie events (disembodied laughter, violent nighttime attacks), falls in love with her master, Edward Rochester. These seemingly supernatural events, however, turn out to be far too real: the specter tormenting Jane is Rochester’s mad first wife.

Nathan Silver’s micro-budget sophomore film, Exit Elena (2012), is by no means an adaptation of Brontë’s novel, but the plot parallels that are present suggest a similar interrogation into the fear/torment of being entrapped in the domestic. Like Jane, Elena takes a highly gendered job (a nurse’s assistant), becomes entirely reliant on her employer for housing, and is hounded by a mad woman, Cindy (played by Silver’s own mother, Cindy Silver). (Here torture takes the form of Cindy’s “family” dinners and, horror of horrors, Zumba classes.) And like Jane, who nearly died of exposure on the moors after leaving Rochester, when Elena is forced to leave her “home” (also after a failed romantic pairing), she has nowhere to go. But what truly makes Exit Elena a Gothic tale is the way the film constructs the horrors of the home, and particularly how women are expected to achieve this ideal space. For Jane, a poor girl with no prospects or family, her options are hard work, marriage, or a timely inheritance. For Elena, some 160 years later, her choices are much the same. But with the first route out of the question after she’s fired and the final one merely wishful thinking, Elena is faced with turning love into labour in order to secure a home.

In Silver’s story, newly-minted nurse’s assistant Elena takes a live-in placement with Cindy and Jim Ackerman (Jim Chiros), caring for the latter’s aged mother. When the octogenarian in Elena’s charge is sent to a retirement home, Cindy insists the young woman stay on with the family, though her new role in the home is murky—is she a substitute friend, daughter, or an object to be offered to Cindy’s emotionally disturbed son? While undeniably funny, Silver exploits a vérité style aesthetic, which gives the film an uncanny sense of realism. (Rather than cutting to close-ups of Elena, Silver often zooms in on her face, emphasizing an observational feel and further grounding the scenes in her perspective.) Thus, as each chapter (Limits, A New Family, Sudden Decision) of the film unfolds, the story’s banal absurdity begins to take on a surreal—even threatening—tone.

The obvious question—especially thanks to Cindy Silver’s perfect[ly] grating performance—is why doesn’t Elena leave? Like Brontë’s protagonist, the answer is economics and loneliness. Just as Jane enters into a romance with Rochester in an unequal master-servant dynamic, Elena is forced to put up with Cindy’s pushy advances of friendship because she works for her. (After Elena leaves a Zumba class, Cindy follows her into the parking lot, badgering her to return; “Cindy, you’re my employer,” the young woman pleads.) This becomes all the more apparent when Cindy foists her son, Nathan (director Silver comically steps into this role), on Elena. After rejecting his awkward, though forceful advances, Elena is fired. Home, it turns out, isn’t where the heart is, but where the money is.

What makes the above question more complex is that both Jane and Elena want a home. This is the power of the domestic: an alluring fantasy that always teeters on the edge of a nightmare, as both Jane and Elena discover. And it’s this deep-seated desire to have a hearth to call their own that brings the women back to their respective sites of haunting. But here lays the crucial difference in these Gothic tales: when Brontë’s protagonist comes back to Thornfield, she does so with economic independence. Thanks to an inheritance from a long lost uncle (this is a 19th century novel, after all), Jane can build a home from the ruined hall and live happily ever after. Elena returns to her “manor” with no such luck. After wandering the concrete moors of suburbia, she sees no way to find shelter other than to offer herself to Nathan. This is the key to if not her home, than at least a home. In this act, Elena, to paraphrase Jane, sells her soul to buy bliss. But it’s an exchange she ultimately can’t make.

In the film’s final moments, Elena is laying in bed next to a sleeping Nathan. Hearing Cindy approaching, she stages a vignette of coupled harmony by placing Nathan’s arm around her neck and shutting her eyes. Cindy, peering into the room, is pleased with this picture and quietly leaves. Elena opens her eyes and rolls away from Nathan. Looking around the room, she finally sees the walls not as shelter but as confinement. Elena’s happily ever after isn’t with Nathan, under the Ackermans’ roof, or even in the purview of Silver’s film. Taking her possessions, and a newly adopted kitten, Elena leaves the Ackermans’ behind, walking off down the road. Elena doesn’t find her happily ever after in a home, but instead leaves room for such a conclusion in exiting one.