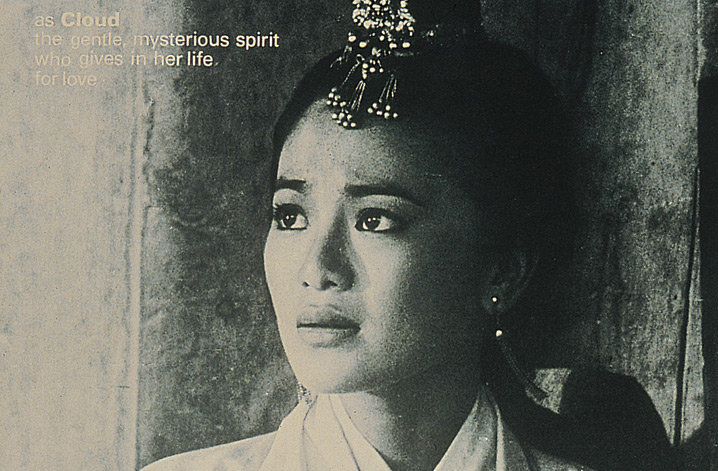 Above: Sylvia Chang as Cloud, a woman or a ghost?

King Hu’s Legend of the Mountain (1979) is an anomaly in the Water Tiger Inn wuxia series at Rotterdam in that it is no wuxia at all; in fact, the film seems an evolution of the genre away from exciting action and into the realm of reflection. History tends to look at the radical, youthful enthusiasm of the Hong Kong “new wave” fresh blood of Tsui Hark or the brilliant flurry of Duel to the Death (1983), included in the WTI series, as the primarily revisionists of the then-stale kungfu-wuxia tropes.  But just as awesome in contrast was a new strand in the conventions being teased out to the extreme by Hu in Raining in the Mountain (also 1979) and in Legend of the Moutain, a lyrical, haunting, fable-like film, as tranquil and contemplative as Hark’s first batch of films in the early 80s were convulsively energetic and tenaciously styled.

The rare director’s cut of Legend of the Mountain screened at the festival (on video, alas, but we take what we can get!) spends nearly one (out of three) hours languorously setting the mood through successive traveling shots following our scholar-hero (and crypto director stand-in) as he passes through one sun-stroked landscape after another.  The pictorial beauty and relaxed journeying quality of this first act places what we normally think of as film reality or naturalism at a distance from the viewer.  It is being related to us, a legend.  The distance, which is typical of Hu, keeps the beauty of what’s before the camera at arm’s length, pushing the emblems (sutras, magic drums), icons (a scholar, a general, a ghost), and events (otherworldly intrigue) on the screen into the realm of another kind of storyworld.  It sounds simple, but in fact to narrate a film as a fable is an incredibly difficult challenge after the advent of sound cinema made all films, by default, “realistic.”  Most attempts at moving a film as a legend fall to reductive illustration of fable-like events.  I can think of few filmmakers that mastered the technique as intuitively Hu does, though one find an antecedent in Mizoguchi’s ghost story Ugetsu and, in a way, in the current cinema of Terrence Malick, an unexpected but undoubtedly Hu-ian filmmaker.

What Hu does in general and in Legend of the Mountain specifically is engage his locations and his sets either spatially (through movements and fights) or pictorially (though references to landscape painting and Chinese literature) and from this engagement pull out of these natural locations extra-human expressions of moral behavior and the phantasmagoric. The tone, then, is one of leisurely relation and elaboration of grand stances and powerful emblems rather than hard-gripped grappling with on-screen reality.  Effervescent, sun-glinted fog banks, hypnotic drum playing and Buddhist ghost bombs (in the place of acrobatic swordfights) suffuse this landscape of vacant natural beauty and similarly empty fortresses, inns, and temples with magic, placing our hapless scholar-hero—continuously trying to revise a sacred sutra (cum crypto film script)—in the dreamlike state of navigating a strange world empty of all but moral peril. He prototypically falls in-between the machinations of two beautiful women, an impudent Taoist priest, and several male remnants of a defeated border army, and while being variously tempted and advised (but which is which?) must try to main upright and good in a haunted and corrupt world.

The film’s profound (in the literal sense) languor, giving expansive time, space, and beauty to the contemplation of a mysterious, fantastic situation, is memorably upset by a final act (another hour) of visions within visions, ghost trials, and the exchange of the suggestive, dreamy precision of those spontaneous, caressing fog banks with the action of ghost-priest duels using bilious colored gas, sacred charms, and more mesmer-rhythmic drumming.  Throughout, Hu elegantly moves his scholar of fabled naivety through these dream-natural spaces, always picking images with instant, forceful harmony within age-old settings (all shot on location).  The film is a powerful call back to the silent era (though far from silent: hear Ng Tai King and Ta Chiang Wu’s beautiful score, orchestrated as heavily as any silent accompaniment) and its unique film language, where what was on screen didn't have to be the world we live in, but could be one from legend, from folk, from history, from romance—from an alternate world which cinema had the power to transport us to, like Hu’s baffled, intoxicated scholar-hero, and in which we look around with wonder, amazement, and learning.