Director Josef von Sternberg's "chart" of emotional modalities (click to enlarge) for filming The Saga of Anatahan (1953) in Japan:

And to Dziga Vertov's breakdown of a film (see more here): 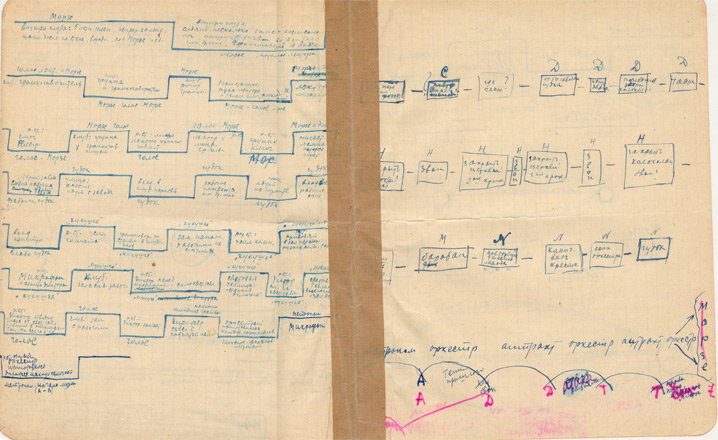 "Sternberg and his crew also created amazingly detailed flow charts and storyboards to visualize the dramatic progress in the narrative. In the flow chart titled "Anatahan Chart," different colors [missing from this image -Ed] specify different feelings (jealous, nostalgia, etc.) and actions (violence, surrender, etc.) of each character in each sequence. The intensity of each color specifies the intensity of emotion or action, and lines are drawn to clarify how these emotions or actions of characters interact... Instead of using verbal languages to make the cast undestand his idea, Sternberg chose to largely depend on the visual aids to articulate how meanings of actions in each sequence constitutes a psychological and dramatic flow..."

—Sachiko Mizuno, "The Saga of Anatahan and Japan"