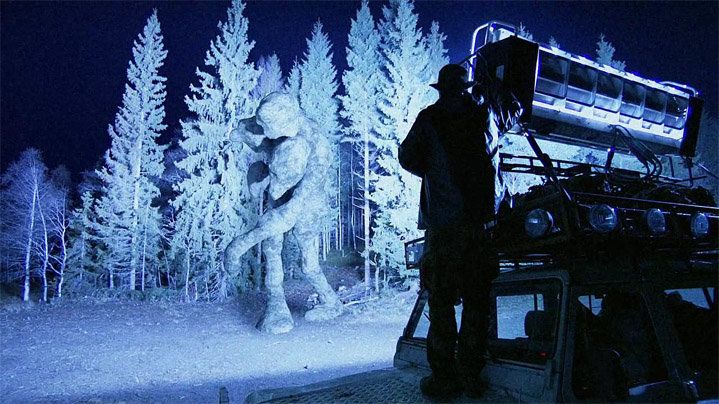 In the Margin is a column where Ignatiy Vishnevetsky tries to make sense of the what's going on in cinema lately.

The best running gag in The Troll Hunter—a pretty good adventure movie just a few gory shots away from being a children's film, spruced up by a found-footage mockumentary device—involves the ease with which the film's slapdash central conspiracy is maintained. Mythic giants run amok in the Norwegian countryside, their population controlled by a handful of bored functionaries (essentially two game wardens and a veterinarian), and throughout the film the cameras of a fictional documentary crew capture a wide variety of people nonchalantly accepting the contrived explanations of the conspirators, the most common one of which is "bears" (Norway's actual bear population is almost non-existent, leading to one of the film's best bits: the conspirators buy a dead bear from a group of Poles who assure them that theirs is a quality bear that came "from a zoo;" that the Poles never wonder why these Norwegians keep buying dead bears from them forms an additional punchline).

Amidst the silly special-effects goofiness and the shock effects is a thinly-veiled cynicism. That  a conspiracy so poorly maintained and organized (all the documentary crew has to do to uncover it is ask a few questions) is able to hide man-eating monsters from the people of a wealthy Western country hints that The Troll Hunter just might be a crypto-satire; when the documentary crew points out to a power plant employee that a grid of powerlines in the middle of nowhere (actually a disguised electric fence) doesn't supply power to anything and he responds only with a bemused "huh" before getting back to work, it confirms that it almost certainly is one.

Interestingly, this brings The Troll Hunter closer to the work of George A. Romero than Super 8—a film in which Romero's work is explicitly referenced, and which also features a film crew (albeit one composed of children) investigating a conspiracy involving the supernatural. J.J. Abrams may be a compulsive storyteller—and, in the case of Super 8, a fairly good one—but he doesn't tell stories for any reason except that he thinks that people want to hear them; André Øvredal—while lacking Abrams' craftsmanship and showmanship—seems to be motivated by reasons other than nostalgia and carefully-honed skills (in fact, The Troll Hunter's abrupt, jokey conclusion suggests that his subjects may currently elude his abilities).

Øvredal never manages an image that conveys as much about setting, plot and his own directorial intentions as Super 8's opening shot (a fatal incident at a steel mill represented by a workman changing a "Days Without an Accident" sign) or a character as interesting as the one played by Elle Fanning (though Otto Jespersen's blasé take on the monster-slaying knight, complete with suit of armor, is pretty damn funny), but at the very least his punchlines and CGI creeps were invented in the service of something besides showing people "a good time" (which isn't to say that they don't happen to still constitute "a good time"). That might explain why—despite being fun, fast-paced and neatly tied up—the ending of Super 8 is a tad underwhelming. It's a fairy tale with no moral, only fairies.