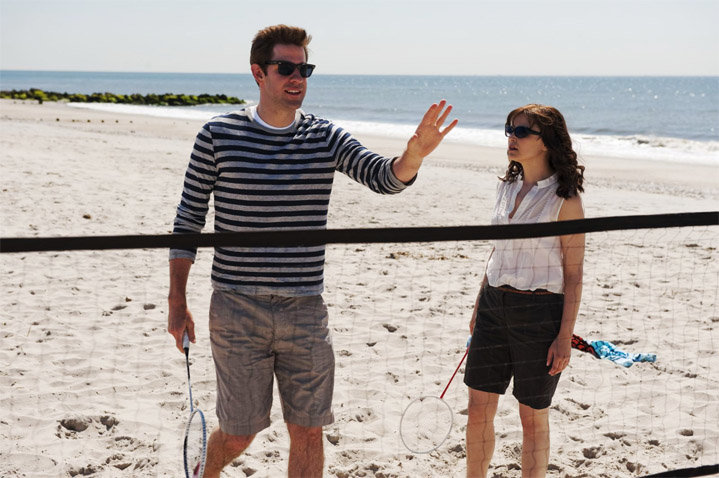 In the Margin is a new column where Ignatiy Vishnevetsky tries to make sense of the what's going on with cinema this week.

Released the same day, two plotty marriage melodramas set in the Hamptons: one with a predominantly black cast (Jumping the Broom) and a clear sense of every character's class, education and profession, the other with an entirely white cast (Something Borrowed) of characters who appear to occupy no discernible space within society—writers who are never seen writing or discussing writing (aside from some brief words about "an editor"), lawyers who are seen going to law school and having offices but never working on cases, and at least one major character who seems to do nothing whatsoever except invent obstacles for other characters to overcome.

Further contrasts: Jumping the Broom, composed of unshowy plan-séquence shots (watch out for that Steadicam long take at the beginning!) and crisp, workmanlike framings, feels like it could've been directed in the 1930s (heck, Loretta Devine's performance—as the postal worker mother of the groom—could have been acted in the '30s); Something Borrowed is a film of staggering visual / thematic / narrative flatness, bereft of details, and though there's a certain charm to its inability to distinguish between plot and incident and major and minor characters (it takes until the end of the movie, for instance, to realize how little John Krasinski’s character actually has to do with anything that goes on on-screen), even that wears (no pun intended) thin. If Jumping the Broom is a case study of how easy it is to combine journeyman Hollywood classicism with a flatly-lit '90s network TV aesthetic, then Something Borrowed—an "amnesiac" movie, one that doesn't so much lack a sense of craftsmanship as live in blissful ignorance of the fact that movies ever had that quality—is a stern reminder that the flatly-lit '90s network TV aesthetic looked boring even on '90s network TV.

Which isn't to say that Something Borrowed is all bad (only partly bad), or that Jumping the Broom is all that good.

As is the case with many "upstairs, downstairs" movies, the downstairs in Broom is more interesting that the upstairs, and the foreground (family secrets, wedding preparations, twists aplenty) is rote compared to the background (the goings-on of the house). Frankly, I'd rather watch a movie about the flirtations of two minor characters—Gary Dourdan as a chef and Meagan Good as the bride's best friend—instead of one about the actual central couple. Bit players dominate; a cameo from T.D. Jakes, who has a basso profundo voice and a lisp, spruces up some preachy talk about marriage, and the reaction shots doled to Mike Epps, Tenika Davis and the excellently-named Pooch Hall outweigh all of the serious stares and portentous silences given to Angela Bassett and Brian Stokes Mitchell.

By the way, that picture above is—honest to God—an actual promotional still for an actual Hollywood movie. John Krasinski is miming an invisible wall while Ginnifer Goodwin does the Slouchy Grandma; both are costumed as blind pencil sellers. Just another reminder that the art of the lobby card—evocative, dramatic, sometimes misleading—has largely been lost. Still, you've got to admire the ballsiness of advertising an indifferently-made film so indifferently.

Sometimes a director's deficiencies work in his or her favor. One thing Kenneth Branagh has absolutely no sense of whatsoever is tone, which is what makes Henry V a cheesy mess, Hamlet a boring mess, Mary Shelley's Frankenstein a fascinating mess, and Thor a psychedelic crazy quilt of special-effects goofiness. One cutaway is enigmatically subtitled "Norway, 936 AD" (or something along those lines) and characters cross rainbow bridges to fight ice giants before battling a fire-breathing suit of armor in a rundown New Mexico town; the Asgard bits, where everything operates on its own weird logic, play like a tent-pole studio remake of The Holy Mountain.

Besides being oddly fun, deeply corny and a total waste of Tadanobu Asano (not so much cast as market-tested, if the film's Japanese trailer is any indication), Thor is sick with Dutch angles, which Kenneth Branagh—being, y'know, Kenneth Branagh—doesn't really know how to use. The Branagh aesthetic—if you can even call it that—is an actorly imitation the sorts of things a film director should be doing, without any discernible motivation. His acting can be described in the same terms; his Hamlet's neither an ordinary human being nor a grand tragic figure, but the sort of Hamlet a "great actor" would act. He's a collection of tics, mumbles and emphases that suggest—but don't actually comprise—an interior life, in the same way that the images in another film opening this week, Passion Play, suggest—but don't actually comprise—a good film.

That Christopher Doyle seems to be working overtime to make Passion Play look like a good movie makes it even more of a waste of Doyle than Thor is a waste of Asano (whom Doyle has photographed in four films, including his own directorial debut, Away with Words). Incidentally, Passion Play is also a waste of a thoroughly weird Bill Murray performance and a typically good Dickon Hinchliffe score (sweeping strings, in full-on Friday Night mode); the combination of Doyle's images, Murray's acting and Hinchliffe's music puts almost enough on the surface to fool someone into believing that something is actually going on beneath. This is a film to be cannibalized, plundered for screencaps and quotes; its elements are individually beautiful and collectively useless.