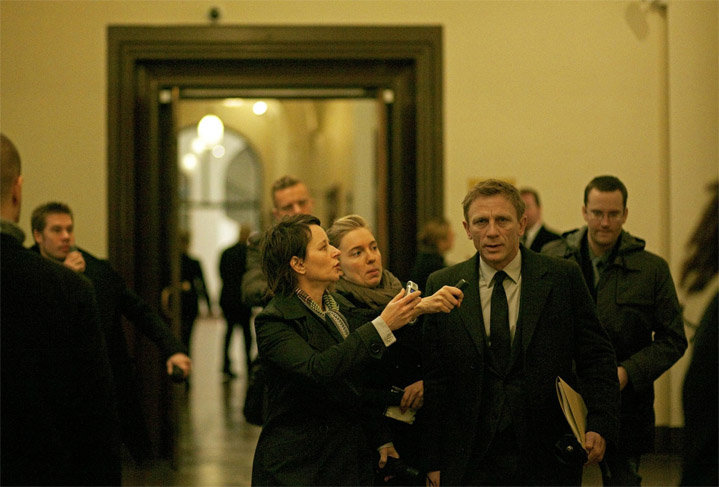 Most filmmakers, good and bad alike, are interested in answering some variation of why; David Fincher, in his present analytical mode, seems more interested in questions of how and in what order. In Fincher's bam-bam-bam construction (what Daniel Kasman called "a montage-based cinema of this happened and then this happened and then this﻿"), causality takes precedence over the usual business of plot; every scene is approached as a process which can then be portrayed as a string of individual details and actions. ﻿

Fincher's new film, The Girl with the Dragon Tattoo, would sound more like a surveillance transcript than a thriller if it were broken down scene-by-scene. Amongst other things, the film obsessively logs: the characters' smoking habits (Mikael Blomkvist, played by Daniel Craig, is an outdoor Marlboro smoker, while Lisbeth Salander, played by Rooney Mara, chain-smokes American Spirits indoors; bit character Isabella Vanger, played by Bergman regular Inga Landgré﻿, is defined by her unwillingness to extinguish her cigarette in a non-smoking area) and coffee-drinking; Lisbeth Salander's eating habits (﻿microwaved ramen noodles, junk food from the vending machine at the Vanger Corporation's archive, the cans of Coca-Cola seen in her fridge and later packed into her backpack) and sex life (Blomkvist's is only depicted when it intersects with hers');﻿ Blomkvist and Salander's use of computers (scanning photos, printing, Googling names, reading Wikipedia and corporate websites) and cellphones (after Blomkvist relocates to the estate of Henrik Vanger, played by Christopher Plummer, the film prefaces each of Blomkvist's phone calls with a scene of him trying to find reception); trips by train, plane and subway (a recurring pattern in the film: a shot of a character at a train station or airport, followed by a shot of them in transit and then a shot of their arrival); and every time either Blomkvist or Salander crosses the bridge that leads to the Vangers' private island. Fincher converts drama into data, and then orders it in sequential order. Again: "a montage-based cinema of this happened and this happened and then this..."

Take, for example, a sequence from early in the film, where Blomkvist comes to the offices of his magazine, Millenium, to discuss legal problems with his editor and on-and-off lover, Erika Berger﻿ (Robin Wright). In the hands of most filmmakers, this would be a pretty simple sequence: a man enters a building and opens the door of an office. Fincher, though, begins the scene with Blomkvist going to a cafe and ordering a coffee. Then he catches a news story about himself on television and, after briefly hesitating, buys a pack of cigarettes from the woman at the cafe counter.  Cut to a shot of Blomkvist outside of the cafe, lighting his cigarette. Blomkvist then crosses the street, enters Millenium's headquarters, makes eye contact with his co-workers, and then finally enters Berger's office. 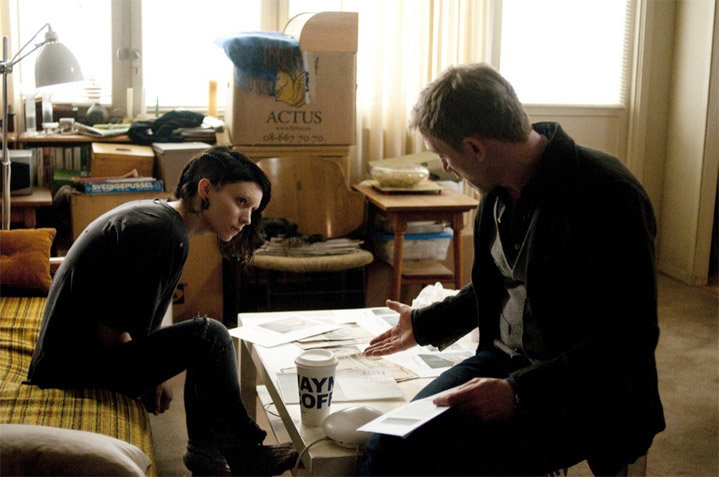 The Girl with the Dragon Tattoo is thick with these kinds of "process-sequences," which range from the sprawling (the film's epilogue, in which Salander dons a disguise and commits an elaborate heist, being one prominent example) to the miniature (a brief scene of Salander making a meal, presented as a series of rapid cuts between items mid-preparation; a similar sequence where Blomkvist finds a cat, goes to buy some cat food, and then feeds his new pet—﻿﻿all the while, of course, looking for cellphone reception). ﻿In lieu of the usual hierarchy of major and minor action—﻿﻿﻿plot and incident—﻿﻿﻿Fincher foregrounds everything.

Like their work for The Social Network, Trent Reznor and Atticus Ross' score eschews the usual hallmarks of film music—﻿﻿leitmotifs, commentary, counterpoint with the action—in favor of tinkly-twinkly atmospherics, aggressive rumbles and synth pulses; it's more of a musical membrane, a connective tissue for all of Fincher's dramatic information. The result is a constant sensation of convergence, of piece falling into place (even when the sequence in question is merely of a man deciding to cross the street). Though it's nominally a serial killer mystery—﻿﻿﻿and a pretty lurid one at that, with Bible verses, Nazis, patricide and incest all making appearances—The Girl with the Dragon Tattoo is, through the sheer volume of details, more a movie about an investigative process than a crime. The solution to the mystery isn't a goal—﻿it's the logical outcome. One clue leads to another, then to another and to another...

The film's clear sense of cause-and-effect is predicated on Fincher's visual style: hyperrealistic lighting, an authoritatively crisp sense of framing (Fincher favors static shots and creeping dollies over handheld and Steadicam), and a fondness for subtly low angles. There's also a fair amount of visual repetition, with similar things being photographed in similar ways—﻿﻿﻿﻿though that probably owes as much to Fincher's belief in a sort of directorial objectivity as to a grand rhyme scheme (Fincher is quoted as saying: "People will say, 'There are a million ways to shoot a scene,' but I don't think so. I think there're two, maybe. And the other one is wrong."﻿). Blomkvist is frequently shown in close-up, photographed head-on from an angle just slightly lower than the eye-line—﻿﻿﻿﻿﻿meaning that he always looks like he's staring at something just behind and above the camera.

As Blomkvist always seems to be looking at something, Salander always seems to be going somewhere; Rooney Mara is repeatedly photographed in close-up from behind—﻿﻿﻿﻿﻿﻿walking, on an escalator, on her motorcycle—﻿﻿﻿﻿﻿﻿﻿with special attention paid to the nape of her skinny neck. Though Fincher never connects these two recurrent shots—﻿﻿﻿﻿﻿﻿﻿that is, there's never a point where Blomkvist is looking at the back of Salander's head—﻿﻿﻿﻿﻿﻿﻿they come to define both the characters and their peculiar dynamic: Blomkvist as an impassive observer, awe-struck, somewhat fogeyish (in many of these shots, Blomkvist is removing the glasses he wears to read; the screenplay, by the likeably hacky Steven Zaillian, plays up the age difference between the two characters); Salander is unknowable, a force with considerable momentum and mysterious intentions. In other words, Dragon Tattoo essentially replicates the sexual politics of the pulpy Stieg Larsson bestseller it's based on—﻿﻿﻿﻿﻿﻿﻿﻿a wish-fulfillment fantasy disguised as a thriller which, despite pretensions to "feminism," conceives of women as beguiling, dangerous, complex systems to be investigated by men (i.e. Larsson). Which isn't to say that Fincher's investigation is anything like Larsson's. 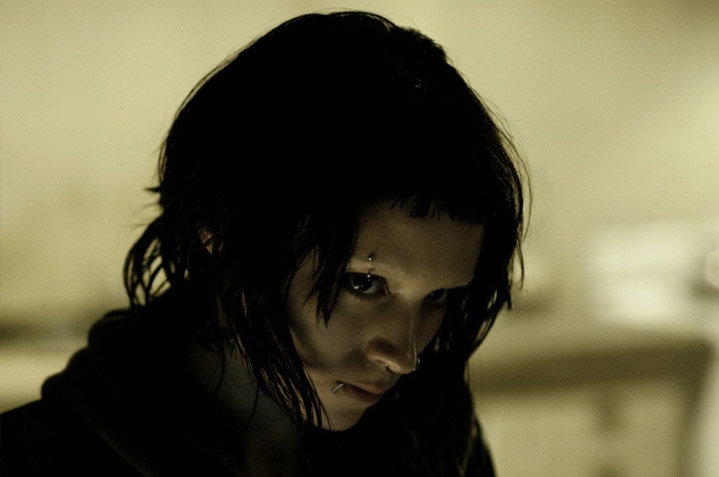 The Social Network's paranoid, perfectionist social monster Mark Zuckerberg seems like the first draft of a "Fincherian hero"—﻿﻿a young man whose compulsive drive ironically drives everyone away from him. Lisbeth Salander, then, is the revision (one thing that identifies Fincher as a very old-school auteur is the remarkable thematic consistency he's maintained from film-to-film despite never having written a single screenplay; Fincher's distinctive sense of form and construction turns every character into a Fincher character).

Part of that stems from the performance given by Rooney Mara (The Social Network's very own Rosebud sled!), which, in true Fincher fashion, avoids putting palpable psychological depth front-and-center in favor of virtuoso technique and precise detail (in that sense, it reminds me of Edgar Ramirez's work in Olivier Assayas' somewhat Fincherian Carlos, which has similar emphases on process, causality, filmmaking craft, and sequence—﻿though comparing Assayas to Fincher discounts the former's visual style, which favors dance-like drift, a camera continually in transit between two points of action).

Like Eisenberg's Zuckerberg, Mara's Salander speaks in a distinctive, strange cadence. Her measured half-monotone, like Zuckerberg's manic speechifying, vocally isolates her from everyone else—﻿﻿﻿though, unlike Zuckerberg, the isolation also extends to her body language: shruggy, withdrawn, always avoiding eye contact. (In a suggestive detail, Craig—﻿﻿﻿﻿who, throughout the film, gives more or less the usual Daniel Craig performance with a hint of Liam Neeson—﻿﻿﻿﻿adopts Salanderesque body language in a climactic scene upon realizing that the man he's talking to is a serial killer—﻿﻿﻿﻿﻿a sly actorly hint that the biggest difference between the two characters is that Salander is always aware that she's living in a sinister world, while Craig's Blomkvist needs the threat of death to remind him.) 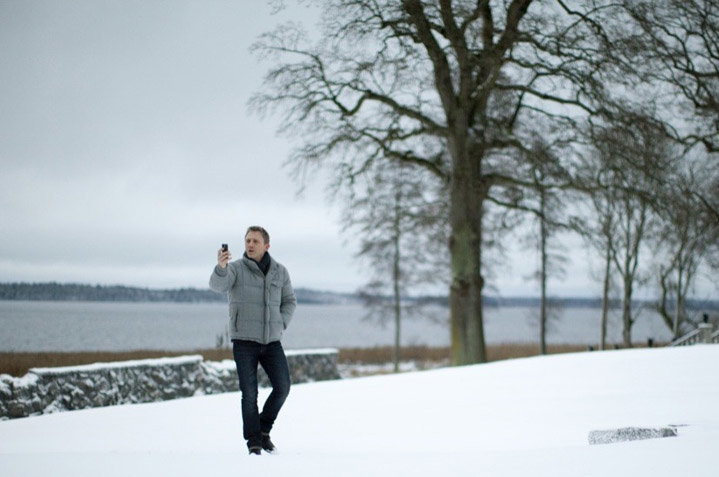 Early in The Girl with the Dragon Tattoo, Salander is brought into the office of her boss at Milton Security to talk to Henrik Vanger's lawyer, Frode (Steven Berkoff). Vanger wanted a background check on Blomkvist before hiring him, and Salander is the person tasked with the investigation (it's through Frode that Blomkvist eventually meets up with Salander halfway through the film). Staring at a wall, she dispassionately lists everything she knows about Blomkvist. When Frode presses her for further, more personal observations—"the dirt," ﻿﻿﻿﻿the kind of stuff that would permit someone to pass judgement on another's character—﻿﻿﻿﻿she resists. Finally, after a lot of prodding, she mentions Blomkvist's relationship with Berger (who is married) and then gives the opinion that he doesn't go down on her often enough. After being made privy to this very personal detail about the man his boss intends to hire, Frode agrees that the information was, as Salander claimed, unnecessary.

This brief discussion outlines the organizing principles of The Girl with the Dragon Tattoo: constant surveillance of the exterior makes looking into the interior unnecessary. Fincher keeps his distance. With the exception of some trademark trick shots—﻿﻿﻿﻿﻿such as a camera lurching over Salander (from behind, of course) to settle on a close-up of her face, framed upside-down—﻿﻿﻿﻿﻿he approaches the action with a degree of impassivity, like a crime scene photographer. Though Fincher has his expressionist bursts (such as Dragon Tattoo's James Bond-style opening credits), his current style is mostly forensic. This finds a perfect counterpart in The Social Network's legal framework; in The Girl with the Dragon Tattoo, it turns the movie into an investigation of an investigation—﻿﻿﻿﻿﻿﻿a thriller about a thriller.

The climactic showdown with the killer even plays off of this intermingling of grisly subject matter and surface calm: in a move that recalls the finale of another icy / obsessive serial killer movie, Michael Mann's Manhunter, it's scored to a piece of diegetic music that the killer himself puts on—﻿﻿﻿﻿﻿﻿though, instead of "In-A-Gadda-Da-Vita," it's Enya's incongruous dentist's office favorite "Orinoco Flow" (it seems that evil isn't just banal, but middle-brow, too). Instead of a cinema of sympathy, subjective sensation, and movement, Fincher breaks everything down into facts; characters are reduced to their processes, and are then reconstituted into characters when those processes are ordered in sequence, with narrative as the mechanism that sets the sequences in motion. Action becomes the only visible facet of a personality rather than that personality's outgrowth; when Salander, in a scene very late in the film, tells Blomkvist about her early life, it registers neither as a "revealing moment" nor as a glimpse into her "motivation," but as another datum.