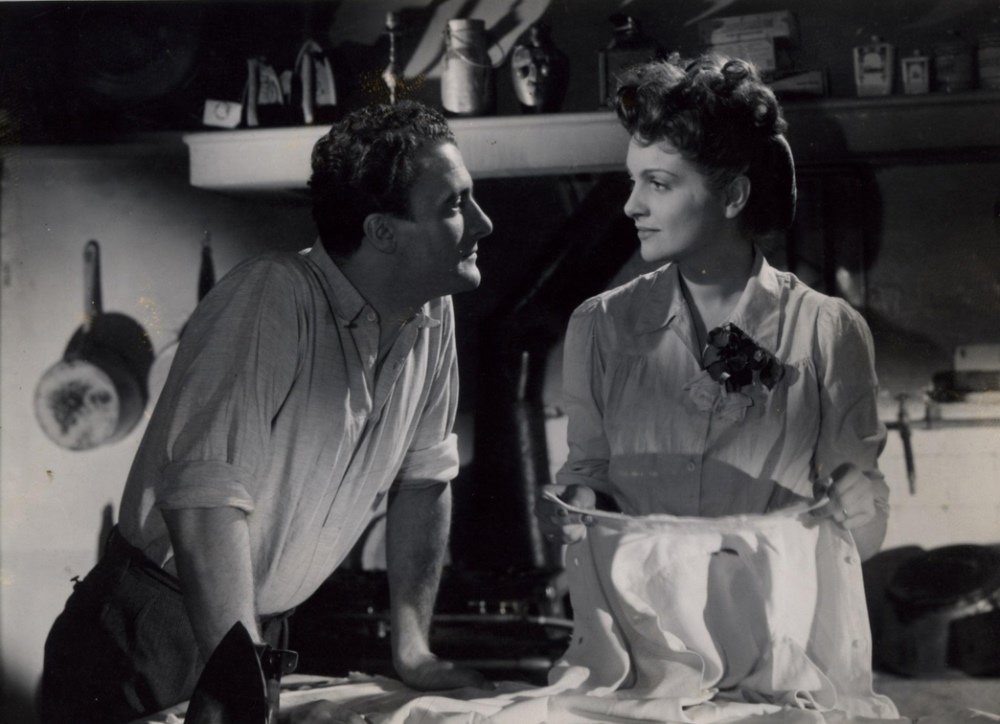 At first exposure, we are likely to wonder what it is about Jacques Becker’s films that make them feel distinctive.Antoine et Antoinette, his fourth completed feature, expresses his sensibility as fully as any of his films; yet Becker is clearly playing by a great many of the rules of entertainment cinema. His visual ideas are not radical: he relies on conventional patterns of decoupage, often uses gentle camera moves when introducing locations, favors a moderate expressionism of lighting that enhances the pictorial qualities of his sets. His manipulation of narrative is likewise familiar: the complicated plot is handled deftly and light-heartedly to convey the basically comic nature of the enterprise; there is a stock villain, the lecherous businessman Roland (Noël Roquevert﻿), whose offenses are accompanied by comical music cues that limit his threat; the story line is designed in broad movements of joy and despondency, with events within movements largely harmonized to fit the larger tone. Even the high-spirited lyricism that Becker loves—a soccer game in which the exhortations of the spectators are edited into the excitement of an imminent goal; or Antoinette (Claire Maffei﻿) ﻿impulsively throwing open a window to say goodbye for a second time to her husband Antoine (Roger Pigaut﻿), bicycling to work on the street below—is not unusual within this genre.

One clue to Becker's sensibility is that, in a film the plot of which deals with the working class's pained consciousness of its straitened financial condition, there is almost no dialogue to underline the theme, other than Roland's offhand, mid-seduction comment to Antoinette near the end: "You workers live like sardines." (Becker has a co-writing credit here, and in general his writing and directing contributions are hard to separate: the power of his films is as much the result of what he selects to show as of how he shows it.) This restraint is not simply a matter of Becker being content to let images and story tell his tale instead of the script: rather, the entire tone of the film is displaced in the direction of pleasure, even as the plot speaks of need. Antoinette may go without food so Antoine can have a full lunch, but Becker prefers to show the motivating affection rather than the discomfort of the sacrifice; she may be a sexual target for an entire privileged class, but Becker shows her delight as she dashes onto a subway to elude one of her predators. We can perceive in Becker a fantasy life of joy and idyll that he imposes on all his subjects, even if it weakens the dramatic or rhetorical power of the material.

But working hand-in-hand with this tendency is Becker's desire to show life as it is lived in the moment and not as we narrate it to ourselves. Certainly there is no shortage of indicators of class and economic issues in Antoine et Antoinette. To name a few memorable instances: the couple's brief discussion of the prospect of parenthood, with Antoinette instantly prepared to battle against Antoine's troubled pessimism; Antoinette's hard-won cynicism in the face of Antoine's profession of eternal fidelity as they cuddle romantically in a rowboat; a barkeeper's daughter (Huguette Faget﻿) flashing her distress for just a moment during her Cluny Brown-like upwardly mobile marriage. Though he seeds all these moments with a Flaubert-like clarity in the face of illusion, Becker is loath to abandon the keynote of joy and celebration. The mixture of moods suggests that Becker's fantasy of happiness is not simple, but rather is allied with his observation that people celebrate in spite of hardship.

Indeed, the accumulation of detail concerning the everyday lives of Becker's 18th-arrondissement ﻿working-class characters is so rich that it encourages in the viewer an observational posture that partially counteracts the comic form of the movie. What one first remembers about Antoine et Antoinette is its dense network of apartments, shops, workplaces, and street scenes, all barely established, all crowded with clutter and bric-à﻿-brac that overflows the frame, interconnected by the wanderings of the characters like the burrows of a rabbit warren. In keeping with this visual density is a stream of distinctive bits of characterization that amounts to a sociology of the couple's environment. Antoine's boss at his bookbindery job micromanages his rate of output, but gives him free books at the end of the workday; the couple's neighbor Juliette (Annette Poivre) holds up the line at her metro booth to admire the new design for the 500-franc note; the barkeeper's daughter grabs the business phone for personal use, saying "Local call?" to her parents; another neighbor, the boxer Riton (Pierre Trabaud﻿), conducts nighttime reconnaissance missions of seduction despite sleeping in the same room as his angry parents; a genial butcher who has won the lottery cannot be troubled by the stiff formal behavior of the clerk giving him his payment; a kinder lottery clerk (Gaston Modot), responding to Antoinette's agitated description of the missing Antoine, is forced to respond "I didn't notice his hair."

Becker's tendency to dial up the intensity of sex, violence, and danger in everyday life, though no doubt a personal predilection, also ratifies his understated commitment to sociological truth. The first scene of the film shows Antoine at work at the bookbindery, barely moving his hands out of the way of descending blades 2000 times a day. Later at home, having received a package of insulators, Antoine thinks nothing of climbing out on the roof to attach them to the building's radio antenna, ignoring the sheer drop off the narrow ledge he stands on; Riton braves the same danger to proposition Antoinette when he sees that the coast is clear. In the bar across the way, the barkeeper's daughter blithely leaps over a trap door to the basement that her mother has opened. Becker allows himself a single downward-angled shot to emphasize Antoine's danger on the roof: otherwise he mimics the insouciance of his working-class characters. Sexual relations in the film are less perilous, but we see the fierce slaps a neighbor gives her husband (nearly every Becker film shows a woman being slapped by a man; here that action happens offscreen, and Becker shows only the woman's dramatic retaliation), and Roland's open predation as he feels up one of his employees and corners Antoinette in her own apartment. Antoine and Antoinette's entirely consensual sex isn't exactly gentle: after an erotic closeup of Antoine's hand closing forcefully on Antoinette's shoulder, the couple falls heavily onto their bed; later, Antoine throws himself on the supine Antoinette from a standing position.

For all that Becker chooses to work within familiar forms, his authorial voice is unmistakable. One throwaway moment in Antoine et Antoinette shows Antoine, lost in contemplation of his lottery win, brushing chest-to-chest past a pretty girl on the subway steps and not noticing: the mix of sexual audacity and character insight amounts to a Becker signature, in only a second of screen time. Almost as distinctive is a bit of comic business during the climactic fight between Antoine and Roland: among a crowd of cheering onlookers, a violinist neighbor squeezes into the couple's tiny apartment to see what the fuss is, notices a leaking gas tube that was shaken free during the fight, turns off the gas, then leaves the apartment undetected.

As always, Becker's control of tone in Antoine et Antoinette is masterful, with emotionally full-bodied scenes growing naturally from light-hearted setups. Roland's bold frontal assault on Antoinette's virtue, typed by Becker as comedy, leads to a painful scene in which the jealous Antoine discovers that Antoinette tried to hide from him the flowers that Roland left with her. Antoinette's reaction to Antoine's cruel interrogation discards the comic device of evasion: she stands up to his anger, but cries quietly through the ordeal, and Antoine's hostility finally collapses in the face of her quiet resistance. The film's high point is a long scene in which Antoine, despondent over the loss of a winning lottery ticket, settles at the neighborhood bar while the barkeeper's daughter is celebrating her wedding in the back room. Becker daringly lets lapse the story's forward motion in favor of extended, beautifully detailed passages of the merchant-class wedding reception, with the bride tentatively muddling through a sad song on the piano, finally relaxing into joy as she finishes to the room's applause. In the front room, Antoinette, who has learned the horrible story of the lottery failure, arrives in search of Antoine, and greets him with simple smiling affection: a dutiful coverup of her sorrow, or a spontaneous moment of love overriding misfortune? (I was reminded of a similar grace note in Henry Cornelius's 1953 Genevieve, one of the only films I know that suggests a spirit kindred to Becker's.) But Becker tops this beautiful interlude a moment later when Antoine, thinking briefly that his missing ticket has been found, disrupts the wedding with anguished false accusations before being confronted with his error and apologizing. Standing amid her family in a long shot composed like a group portrait, the bride sadly, sympathetically accepts Antoine's apology: we may have expected the family to take umbrage at Antoine's insults, but Becker's framing tells us instantly that everyone in the room relates all too well to the feeling of losing a fortune.