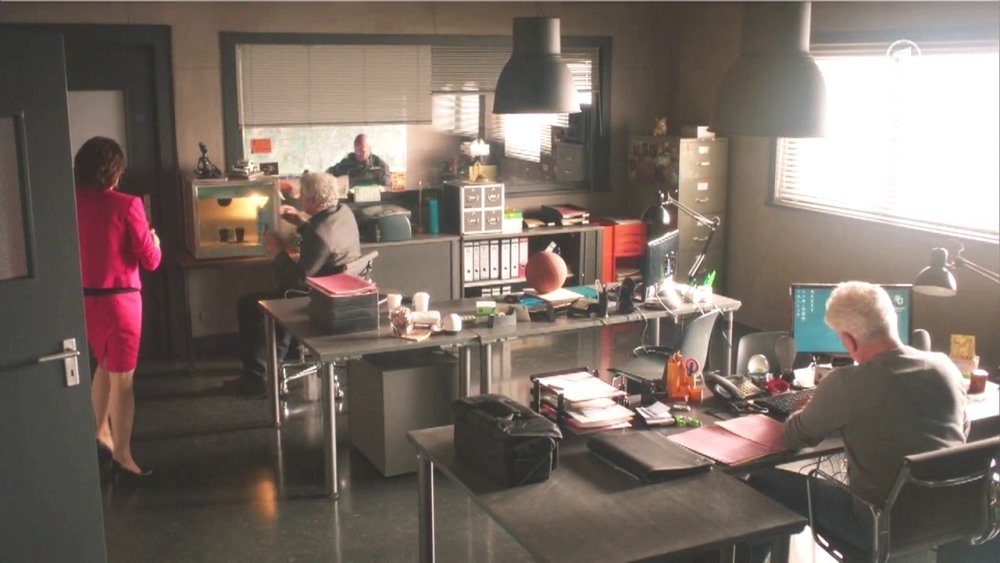 Above: Putting coffee in the fridge.

With the upcoming Berlinale competition premiere of Die geliebten Schwestern (The Beloved Sisters, actually shot back in 2012), Dominik Graf remains in the festival spotlight after a big Rotterdam retrospective last year (full disclosure: programmed and accompanied by the Ferroni Brigade) introduced the work of this astonishing—and astonishingly prolific—German director to international audiences. But while his Berlin-bound Schiller epic is one of Graf's increasingly rare excursions into the theatrical terrain, his TV schedule has been as hectic as ever, with several new works lined up for release this year. Thus, somewhat shockingly, 2013 saw only a single Graf premiere: Aus der Tiefe der Zeit ("From the Depths of Time") is his third contribution for Germany's enduringly popular prime time crime show Tatort ("Crime Scene"), and confirms Graf's maddening tempo—both in its appearance and execution: The episode was shot in late spring and first broadcast on October 27th. 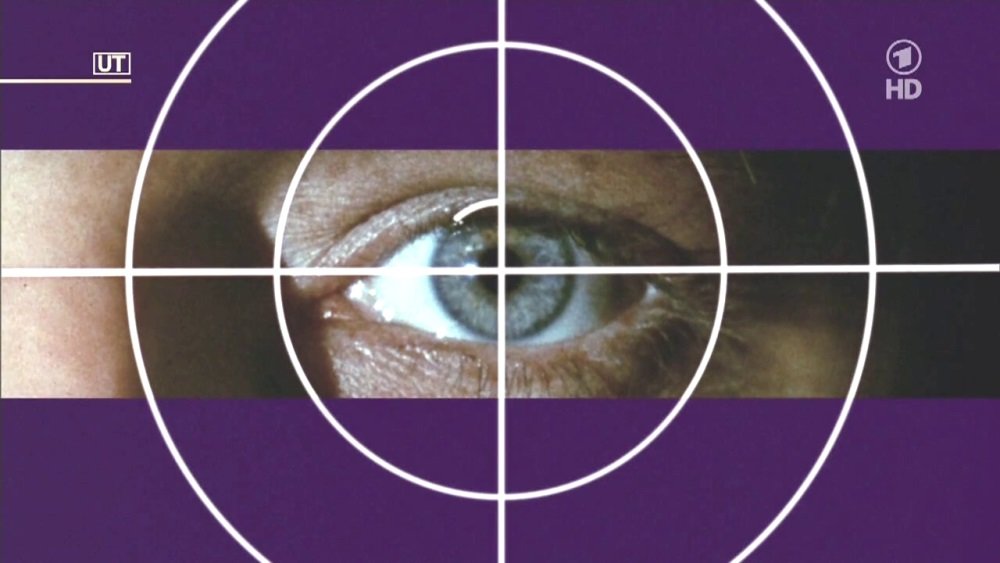 ﻿Above: The Tatort logo, so familiar to us German speakers, yet unknown around the world.

Bringing on his characteristic crash-zooms over fast motion cityscapes already during the credits﻿, Graf wastes no time in establishing a tone that is breathless even by his own standards—and he had already raised the stakes considerably in his hybrid output of the last 15 years or so. Indeed, the breakneck pace and unusual construction caused some controversy in online circles dedicated to Tatort (after all, a German institution for more than four decades), with many decrying the defamation of their usual Sunday relaxation quotient. Graf's last Tatort: Frau Bu lacht ("Mrs. Bu is Laughing"), made way back in 1996, certainly the critic's darling of his TV work and often cited as one of the show's best episodes, was superb, but also so subtle and poetic it bordered on arty ambition (or at least, per a perfect German expression: kunstkrimi), usually a no-go for Graf. The irony in Graf's stylistic about-face is unmistakable, even more so as Aus der Tiefe der Zeit focuses on the same pair of detectives.﻿ (Throughout the year, Tatort functions as an almost-weekly roundelay, alternating several cop teams from different cities in Germany and occasionally Austria and Switzerland, with most of the characters and actors household names in German-speaking areas.) 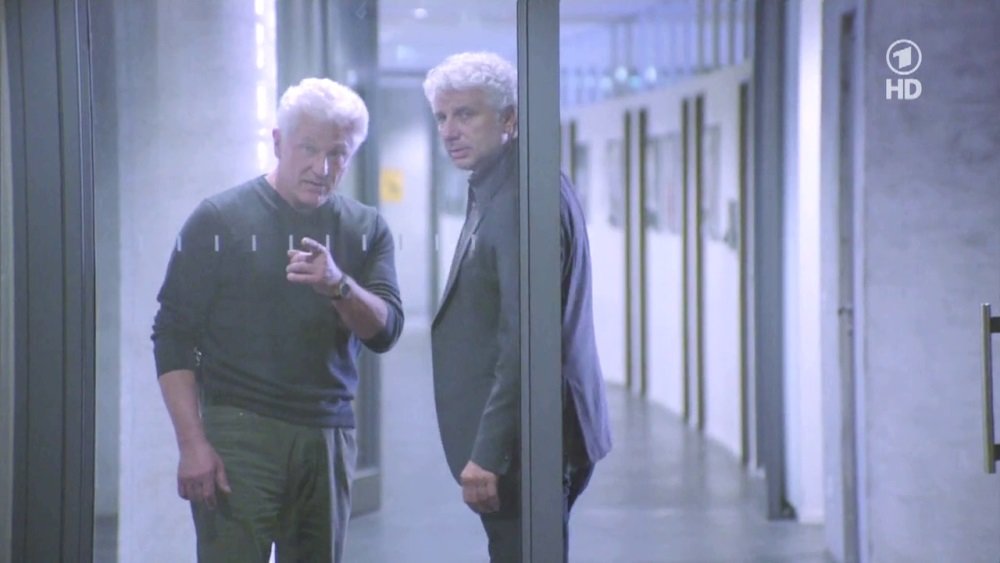 Returning to his hometown of Munich, Graf grants no coziness or nostalgia to his chief inspector duo Ivo Batic (Miroslav Nemec) and Franz Leitmayr (Udo Wachtveitl), on the beat since 1991 and white- and wooly-haired veterans by now. Among the several (false?) starts, some overlapping, are scenes that later can be recognized as memories of Magda Holzer (not least of her performance days in Western-garb as star of “The Annie Oakley Show”!)﻿, matriarch of an influential family, furthermore of an inquiry into shady real estate dealings of involving one of her sons—and of the recovery of the other son's body on one of countless building sites strewn throughout Munich. Most notable during the opening assault though, is Leitmayr's attempt—he has to relocate because his apartment is flooded: no time (or place) to rest—to find his way through the streets, as the construction activity seriously fucks up well-known route plans. Disorientation is the dominant factor: Leitmayr's attempts are accompanied by helpless directions (the navigation system falters, he calls a friend) and intercut with an official hearing on dubious sales and reallocations of government property in which Holzer junior is involved. (Graf's own voice figures prominently among the enquirers, referring amongst other things to a “manipulated study.”) 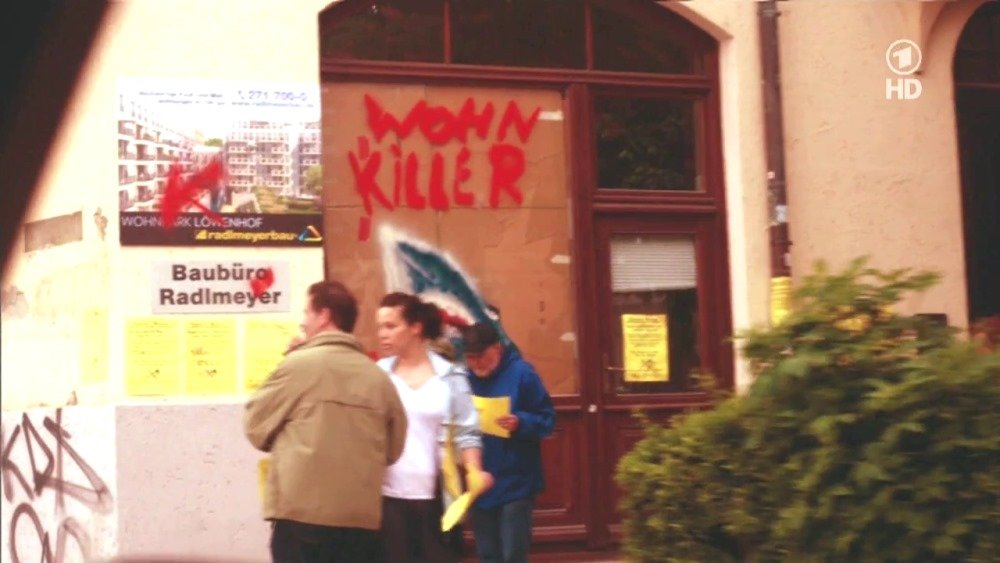 Above: The shoddiest of Graf's locations (the sign says: building-site office).

In Cassandras Warnung (“Cassandra's Warning”, 2011), Graf's recent, giallo-addled contribution to the competing series Polizeiruf 110 (“Emergency Call 110”), a supporting character gave a memorable monologue about the nauseating consequences of Munich's gentrification—a subject on which Graf had already drawn the battle line through the whole country in Der Weg, den wir nicht zusammen gehen, his angry and adust (and exceedingly excellent) essayistic contribution to the episodic endeavour Deutschland '09 – 13 kurze Filme zur Lage der Nation (Germany 09: 13 Short Films About the State of the Nation, 2009), as emblematic of whitewashed contemporary malaise. Although Aus der Tiefe der Zeit offers once again many memorable glimpses of another Munich, another Germany in its down- and offbeat locations (a Graf mainstay since the beginning: a country plays itself), it seems like rearguard action amidst corporate encroachment. One can't help flashing back to the Tatort classic Tote brauchen keine Wohnung (“Dead People Need No Apartment”, 1971) from the TV twilight days of the great German filmmaker Wolfgang Staudte, in which gentrification is approached almost benignly by comparison, represented via the folksy spitefulness of Bavarian icon Walter Sedlmayer as property owner, and accompanied by grassroots campaigns and public discussions at the local inn. Now, when Leitmayr looks for plain cooking at the traditional Bürgerwirt in Aus der Tiefe der Zeit, he runs into a upper-class private function (with a typical throwaway Graf gag: a bunch of attendees hurry towards the toilet to flush down their drugs upon the arrival of the unwelcome cop in their midst). Leitmayr also joins a public demonstration against corrupt building machinations in the end, but chillingly Graf closes his film on a surveillance camera image, casting a skeptical glance into the future, where new (class) wars await. 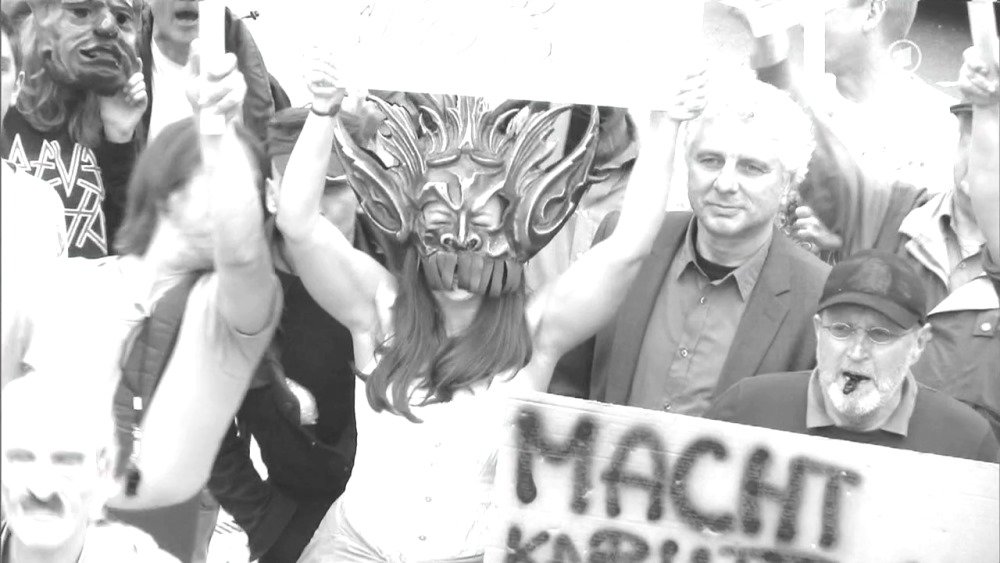 Before that, Graf and scriptwriter Bernd Schwamm (an important connection from—and to—Graf's first decade as a director) cram in piles of plots, prickly, pointed and poetic details, possibilities: As the body count around the Holzer investigation mounts, some guy in a skeleton costume dashes non-sequitur along the street, a female witness practices yoga during interrogation, coffee cups have to be put into and looked for in refrigerators because the machine serves them too hot (a tribute to the initially great Austrian crime comedy series Kottan ermittelt) and even earthquakes shatter the family mansion (“The Fall of the House of Holzer,” one inspector quips). But picking out just a few details from the frenetic farrago Graf orchestrates seems beside the point: Lifesize details and bold cinematic gestures are accumulated in layers, pressed against each other in a pumping, contemporary tempo and style, until the cracks in between start to reveal alternate histories and crimes of the past, mirroring the layers of (hi)story, whose constant, labyrinthine unraveling to the very end is what drives the script, not whodunit or some usual form of suspense. (Not really a spoiler:) During the ironic, yet also rueful (“he was the saddest of us all”) summing up the case—with diabolical casualness cut in chunks into the escalating showdown—one inspector points out that “the only actual murder in the case” took place in 1947, when a Nazi-in-hiding was left to starve. The legacy of war(s) looms heavy in the background, up to the displaced contemporary conflicts in the era of capitalist excess: Between the remnants of WWII and current gentrification battles there's the Yugoslav war, which has brought a group of fascist nationalists to Germany (spearheaded by Graf regular Mišel Matičević as Holzer's strongarm man), challenged by Batic in a great scene of dueling Ustaša song interpretation. 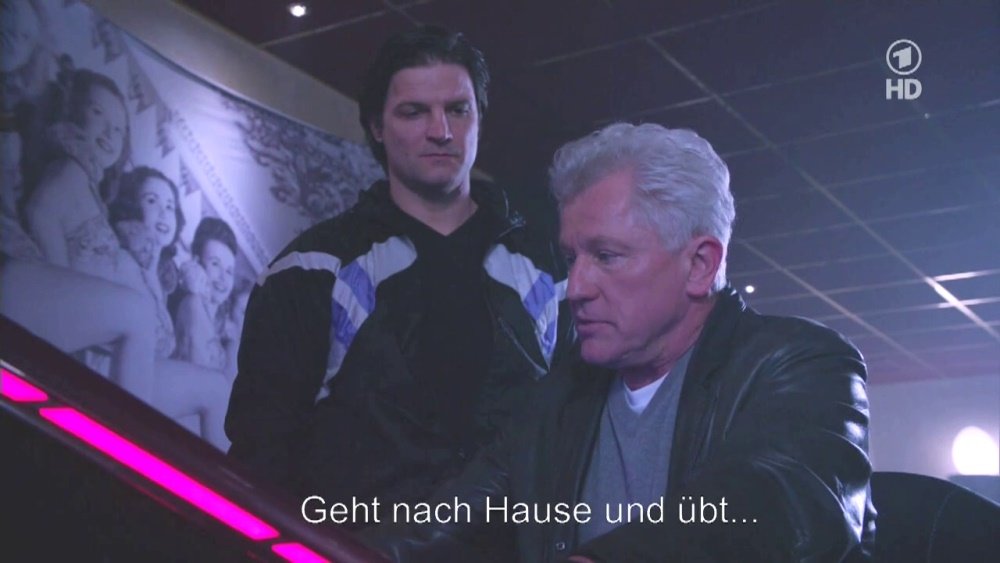 Above: Ustasa song duel between Batic and Misel leads to quarrel (in subtitled Serbo-Croatian﻿, of course!).

Meanwhile, film posters in the background point to Graf's aesthetic allegiances: the spaghetti Western Nevada Joe, rhyming with Magda Holzer's show background, whereas the Italophone sound of Nuda per il diavolo hides an erotic German fifties melodrama by Wolfgang Becker who went on to become a stalwart of national crime TV in the 1970s, whose legacy has been an increasingly important, idiosyncratic inspiration for Graf. Elsewhere, the movie poster for Robert Siodmaks's adaptation of Karl May's classic Der Schut (Yellow Devil, 1964) points towards hidden (film) history: the Karl May movies, some of Germany's most popular productions in the 60s, were shot in Croatia, with local extras. “Maybe, considering the good connections of Nazi Germany with Croatia, some former Ustaša fascists dressed up as Indians?”, Graf has pointed out. One is also reminded of one of Graf's idols, Zbyněk Brynych, the great Czech director, who made some of the most staggering, unconventional works in the history of German television, but also was able to casually suggest the secrets and lies behind the respectable veneer of post-Wirtschaftswunder-Germany in ostensibly modest little crime fictions like his Derrick episode Mord im TEE 91 (“Murder on the TEE 91”, 1977), which has some intriguing parallels with Aus der Tiefe der Zeit—most obviously, in both the discovery of a body leads into a complex labyrinth governed by unsurmountable “higher interests,” forcing the heroes to assess the situation with philosophical, even melancholy detachment. The most beautiful sentence in Graf's film may be a witty, yet profoundly sad rejoinder towards corporate restructuring visions: “And where in Munich can you still see the stars?” 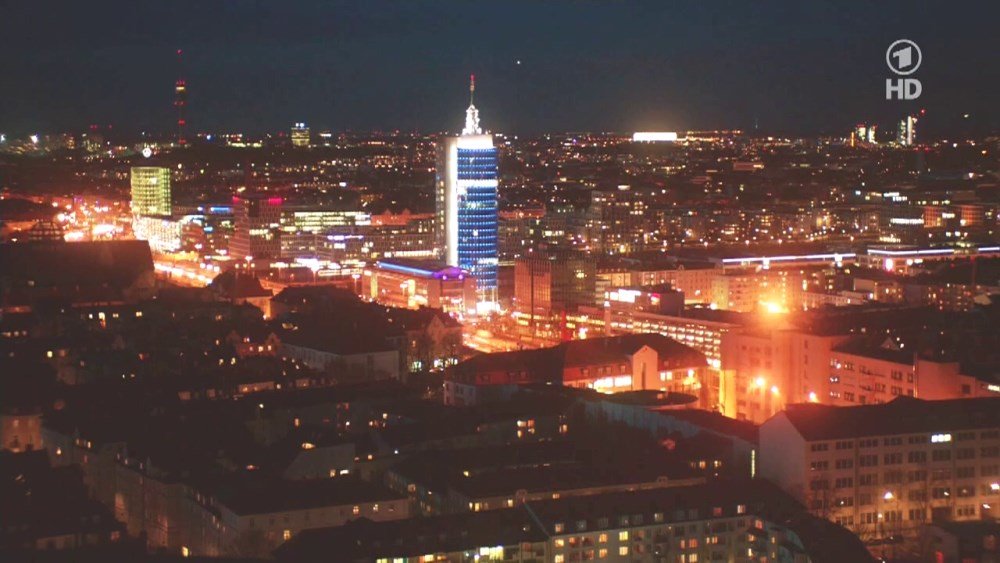 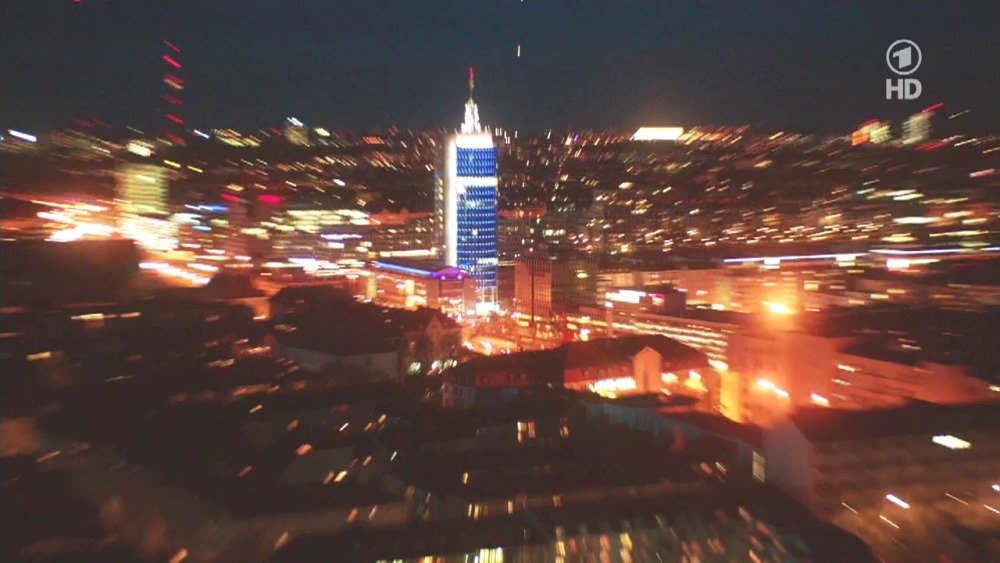 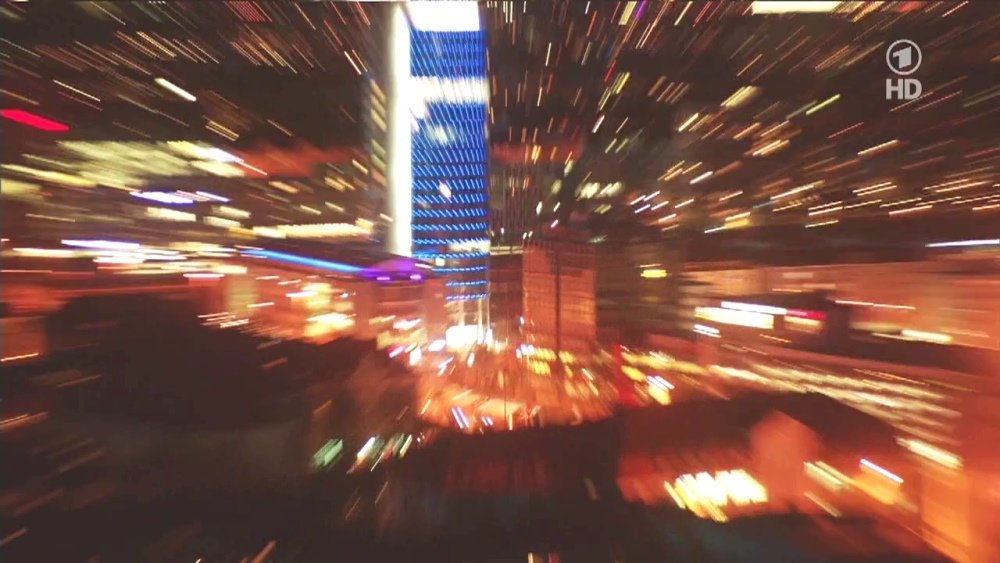 Above: Three successive pictures of a Graf-zoom into a Munich without stars.

Maybe in the ever-expanding cosmos of Dominik Graf.﻿ 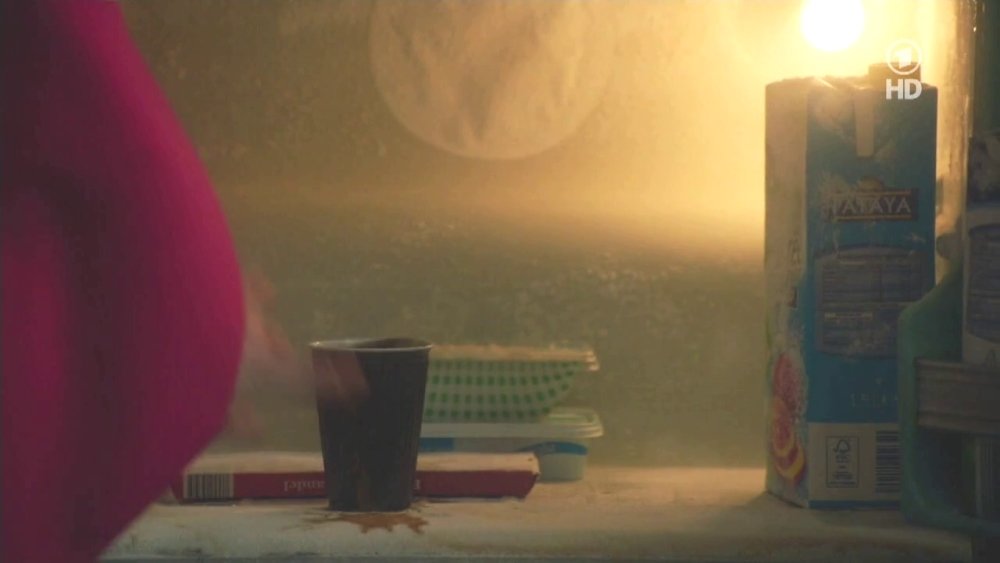 Above: Coffee still in the fridge.