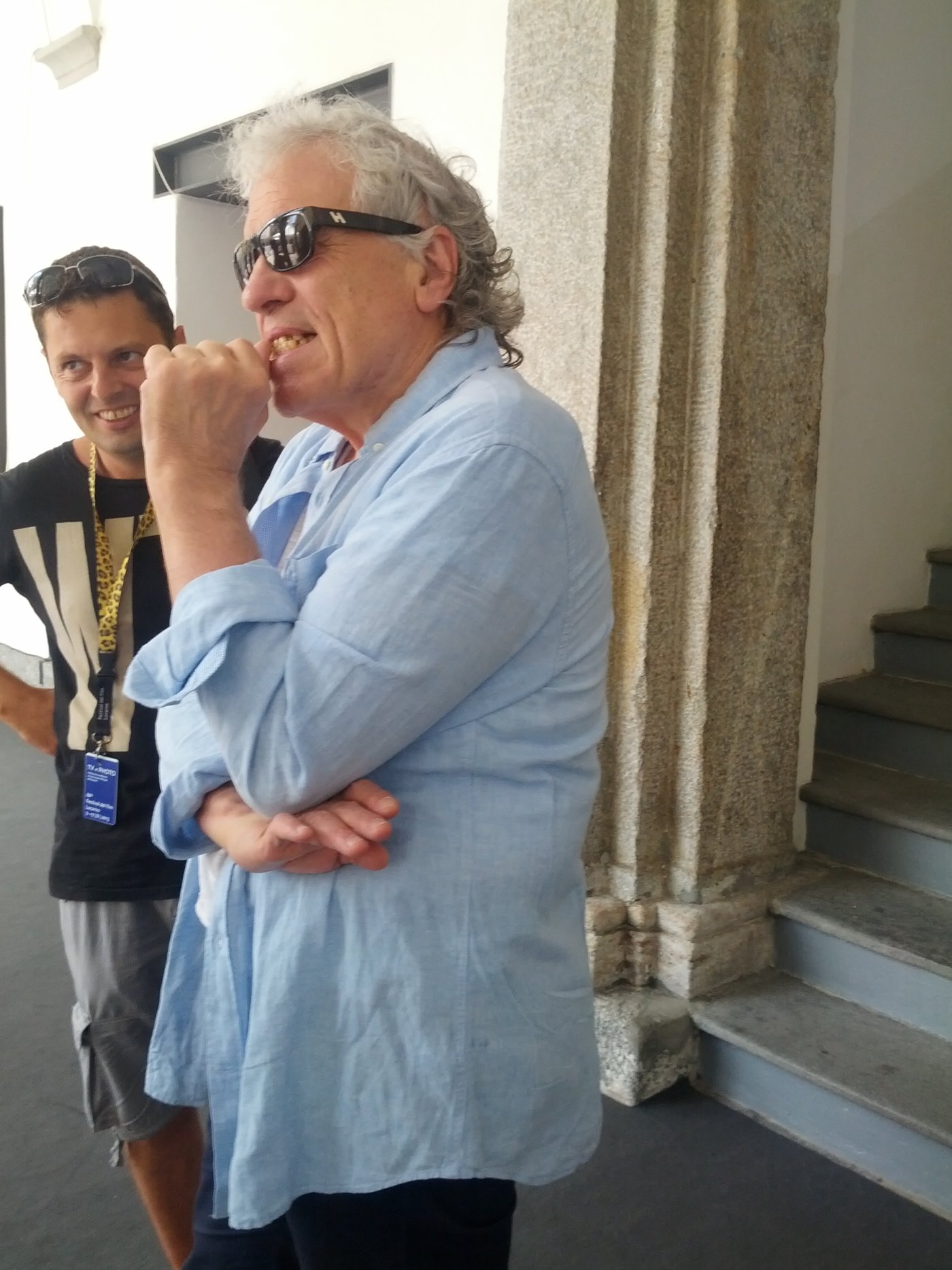 ﻿Well into the 66th Locarno Film Festival, whispers arose about a surprise visitor. Abel Ferrara was swinging through the South of Switzerland to revisit a festival he enjoyed just a couple years ago (remember this) and to create some buzz about his forthcoming film about Pier Paolo Pasolini starring Willem Dafoe—which he hopes to shoot immediately. With Belgian and French funding, Ferrara was on the hunt to attract Italian attention, to try and secure some support from the country he'll actually be working in (and portraying). I found myself in a strange position for the interview, having not seen Ferrara's latest (Welcome to New York) and being directed to discuss a film he had yet to shoot, leaving us to talk, rather loosely, about his aims for one of his most ambitious projects...

ADAM COOK: So you’re trying to get Italian funding?

ABEL FERRARA: It would be nice to have Italian funding for an Italian movie. I’ve made two films there, for 4 or 5 million, and I lived in Rome for five years. The situation is worse and worse. Plus with these Italians seeing is believing, you can’t talk about making a movie, they gotta see you there doing it. The process is never cut and dry. Full-court press and the film gets made or it doesn’t get made.

COOK: Where did this project originate? Was it Willem [Dafoe] from day one?

FERRARA: We had the idea together for a while, it came naturally. When I started doing documentaries, and all of a sudden it becomes an important idea to me to do a films about real people: Dominique Strauss-Kahn, Pasolini. Maybe at one point I thought I could never do that, but now…

COOK: Welcome to New York is your first film based on a real person and story, and Pasolini will be the second in a row.

FERRARA: I don’t think The Driller Killer was a real person. [Laughs]

COOK: Why this interest in real figures?

FERRARA: If you’re doing Napoli Napoli Napoli, it just comes next…Mary was about a real person now that I think about it: Mary Magdelene. Was she real or not real? We were taking it in that direction.

COOK: Is it important to you to capture the reality of these situations, or..?

FERRARA: I’m interested but I don’t know if we ever get to it. You can make a film about Strauss-Kahn and in the end you’re filming [Gérard] Depardieu, and it’s a film about Depardieu. You gotta recreate an event that actually happened…The circumstances are ridiculous in Strauss-Kahn's story, and with Pasolini everything is mind-blowing, his whole life. Being such a genius, and then being addicted to picking up boys at a train station, we're talking 1975 and this aint the West Village.

COOK: What about Pasolini then—cause there’s so much that makes up his life and who he is—do you hope to emphasize?

FERRARA: I think it’s to satisfy this need to see how they go down in flames.  If you’re taking the last day in his life, I mean it’s a tragedy, a self-imposed tragedy, a fatalistic thing…this guy is a lifeforce…how does that end?? What was it that came together to end it? Himself? All these forces line up.

COOK: What can his death say about his life?

FERRARA: It can say everything. It’s like with JFK. Was it his ambition, his feeling of omnipotence, that he never saw it coming? He was a smart guy, did he have a hint that there was a coup d'etat being planned around him? Did he know? Was he not giving a fuck? Was he rolling the dice? A lifeforce like that doesn’t just come to an end it’s like the sun blowing up.

COOK: So that’s why we’re looking at his last moments?

FERRARA: It gives it a narrative. I’m not really interested in someone’s death, but this is not a normal death. It’s not easy to kill somebody, let alone the way he died. A filmmaker trying to get back his stolen film, him blowing up a major plot, just with what he was doing on a day-to-day basis. He was an addict and they say if you’re an addict you end up in jail or dead. That was his deal. How many times can you roll the dice, pick up a guy at a train station at 11 at night. There was this story, that he came to New York, got an award at MOMA, stayed there for 5 minutes, couldn’t stand those bourgeois people, and went to Harlem. This is 1969, can you imagine this dude, can’t speak a word of fucking English, gay, a flaming queen, off and running up in Harlem, doesn’t know where he’s going, looking for guys in Harlem. Beyond a death wish. And he ends up with a bunch of Black Panthers or something. And he survived.

COOK: It’s something existential, living with that risk.

FERRARA: Yeah, he was a social critic and he used to say you guys are living in your fucking ivory tower, I’m actually going to live, out in the field.

COOK: Participating in the world.

FERRARA: Right, you wanna be a social critic: be social [Laughs]

COOK: I saw this amazing little drawing he did for Scorsese at an exhibition in Berlin.

FERRARA: Incredible, he was the best at whatever he did. Kurosawa did these amazing paintings for, what was it—

FERRARA: Yeah, you see those? They’re exactly the film, amazing. Both are brilliant dudes.

COOK: What do you see in common between your and Pasolini’s cinema?

FERRARA: We’re gonna find out. You’re gonna see. This is the test. We’re gonna shoot something from his script about St. Paul in Detroit. Awesome script. I’m gonna shoot a scene from it, I mean if the film takes us in that direction, we’re planning on it.

COOK: How do you shoot that? Do you try and assume Pasolini’s eye or do you just be you?

FERRARA: I’ve tried to put myself in his shoes before while shooting, I can’t help it. You absorb his films. We all worshiped the guy.

COOK: How do you relate to Pasolini spiritually and politically?

FERRARA: Marxist-Catholic, he was against birth control, he was chickenhawking guys and living with his mother. Walking contradiction. When you make a film like this you hold back until you’re there. You don’t make a last commitment on entering his soul until you’re shooting. We’re gonna find out.

COOK: You’ll be shooting in Rome, and it has changed so much over the years. What Rome do you hope to show us?

FERRARA: I think we have to create what 1975 was, pretty volatile, very political, violent. Go see Taxi Driver, that’s it. That’s the closest. It’s not about the clothes or the cars, Rome is eternal, the architecture is ancient. Different attitude now. You start with the Empire, it’s constantly changed, it’s a hard place to figure out.

COOK: Particularly in the 20th century, where Italy has transformed from a place of faith to a place of consumerism. It’s visible in the cinema, in stuff like Olmi's The Tree of the Wooden Clogs that takes a look back at it, it’s in Teorema on the other side.

FERRARA: Right, that was Pasolini’s big heartache. It’s one thing being connected to growing your own food, to everything, and it’s the same in America, people are poisoning themselves, you just go to Whole Foods. What is the hope of the Industrial Revolution…He outdid himself with Teorema, man…

COOK: Are there other figures you want to portray on film?

FERRARA: I think Strauss-kahn and Pasolini may give us our fill, we can go back to making up shit.

COOK: It’s been harder and harder for you to get support for your films.

FERRARA: When I first started shooting, there used to be a social structure… We got the money to shoot for King of New York just like that. Then the people who ran the film business ran the country and they ran it into the ground. But these films are long range get-backs in terms of money, so it’s hard to sell. I care about the movie being made and knowing there’s longevity to it, but they just want quick returns. Pasolini might be a period piece but it shouldn’t cost much more to make, if you know how to spend the money.

COOK: I imagine you go through a lot of headaches.

FERRARA: It’s not a headache, I live it. You gotta keep it real. You just can’t lose sight of what you’re trying to do which is make a good movie.

COOK: What is it you see in Dafoe beyond the obvious physical similarity?

FERRARA: He’s from the Midwest, Wisconsin, and he’s basically now a Roman citizen, he’s been living in Rome for seven years, married to an Italian director, he’s Italian as you’re going to get. He speaks the language. Pretty funny.

COOK: Things are all moving to the internet. How do you feel about that?

FERRARA: It’s out. You roll it out any way you can, any place. Who cares? I live in New York, people are watching movies on their phone for five minutes at a time on the subway. They watch the same clip eighteen times. People are gonna roll with it the way they roll with it, you know. Movies are supposed to be seen in a communal situation and now most people watch them by themselves, that’s just the way it is. You can go to a cinema these days and maybe there’s eight people there.

COOK: And two of them are texting the whole time.

FERRARA: No kidding, you could be the only guy really watching it. You get pissed off. In France you can’t even laugh at a comedy, you’ll piss someone off. What bullshit is that. My cinema-going experience was on 42nd St., so you scream at the film with everyone. It all depends. How to exploit a film after you’ve made it, I dunno, it’s someone else’s job, I’ll help ‘em, I got to, it makes it easier to make the next one, but I make things, that's what I do.