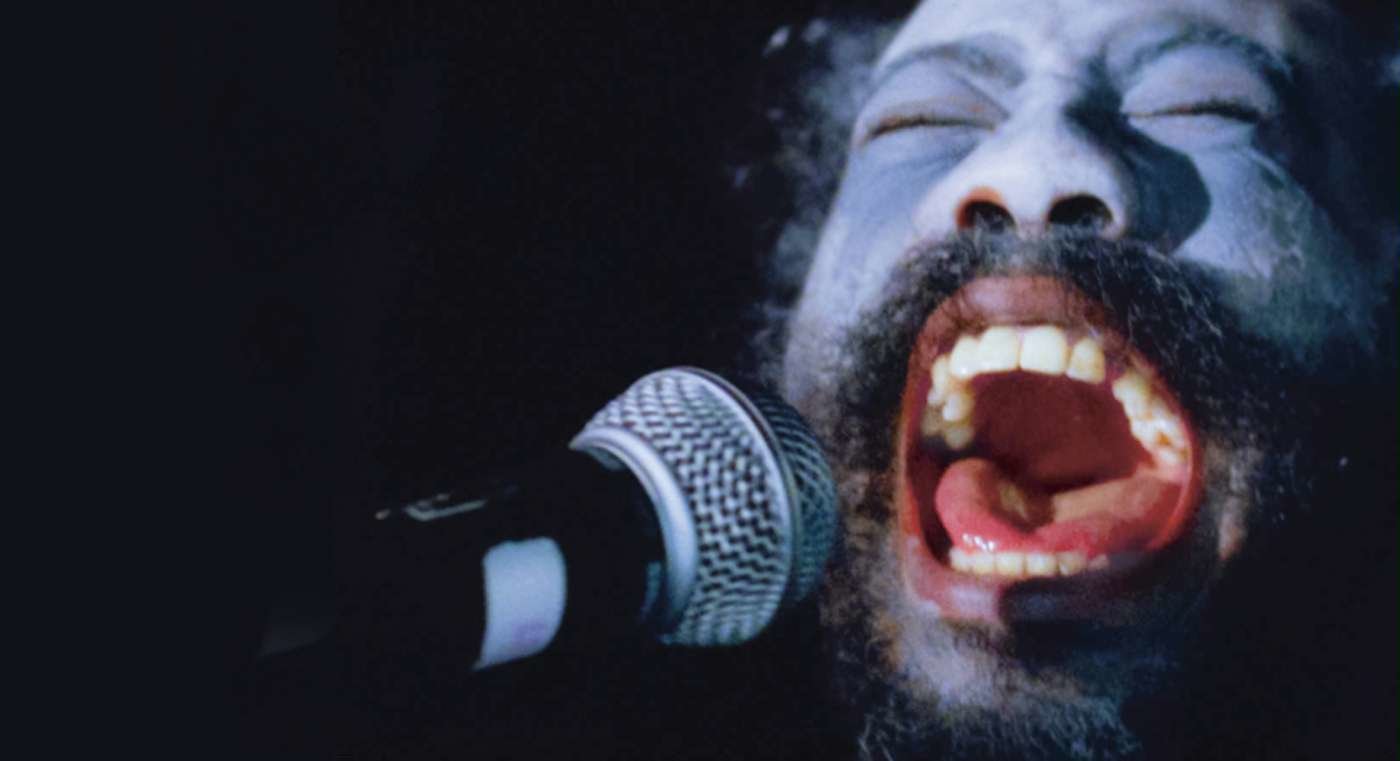 ﻿Ben Rivers and Ben Russell, two artists whose accomplished individual bodies of work already complement one another with overlapping ambitions, ideas and approaches, co-direct A Spell to Ward Off the Darkness (which has just premiered here in Locarno in the Fuori concorso section), a three part manifesto on the potential for utopian living, and a loose, fluid (distinctly apolitical and secular) definition of what that may be. Beginning in a commune in the Lofoten Islands, Rivers and Russell fleetingly document moments of life, music and conversation among a peaceful collective of people, before jarringly switching to a portrayal of a tranquil solitude in the wilderness of Northern Finland as a figure canoes and settles on the shore, and, finally, a black metal performance in Norway. These three parts are seemingly disparate, but tonally unite in Rivers and Russell's unbiased presentation. One of the central elements that connect these three parts are the film's main figure, Robert A.A. Lowe (pictured above)﻿, the only character who appears in each section, at first in the background of the first part, as the individual in Finland, and as a musician. The other connective elements of the film are these separate, but not opposed ideas—variations of collectivism and solitude—of ways one can live in the world.

NOTEBOOK: You two have known each other for quite some time before finally making a film together. When and how did you meet?

BEN RIVERS: We first met in 2006, I think. Ben was touring around Europe, and I was running a cinema in Brighton and we hosted him and his films. We ended up touring together a couple years later with our films in a program called We Can Not Exist in This World Alone. Showing our films together and talking about them together was the germ for this project.

RIVERS: Yes, and halfway through making this film we went to the Republic of Vanuatu, and worked on a couple shorter films together, a kind of spin-off. We presented A Spell﻿ in Marseilles to try and get money to get it made. We won the “Best Project,” and the prize was two free flights anywhere in the world and a Panavision package.

BEN RUSSELL: They were meant to be used for the film we were pitching but at the time we were planning to shoot in Norway but AirFrance didn’t fly there or something, so we decided to make something else as well.

NOTEBOOK: There’s a lot of overlap in what interests you as artists.

RIVERS: And our films are quite formally different, so it was interesting bringing these things together.

NOTEBOOK: The film begins with this incredible shot where the camera is moving slowly above the water as the sun sets on the surrounding nature, made more abstract by the coming darkness. Part way through the shot this amazing music cues on the soundtrack: can you talk about this song? It sets the tone for the rest of the film…

RUSSELL: A lot of the stuff that happens in the process of filmmaking is luck, serendipity. That lake shot is in Finland, but we were in Estonia in the very end, we were wandering around, and came across this guy, an Estonian graphic designer﻿, with this utopian home called Futuro, and he had just designed the album cover for this Estonian “folk” album—folk isn’t quite right—that came from a Pagan history and had been re-orchestrated by a contemporary composer and sung by a children’s choir. So this particular song is a fire spell.

NOTEBOOK: Did the title of the film come after, then?

RUSSELL: No, we had the title early on.

RIVERS: Like Ben says, there’s this serendipity and you get these gifts.

RUSSELL: The song was like the last bit we put into the film.

NOTEBOOK: How did you discover the commune that you follow in the first act of the film?

RIVERS: We did a lot of research, and traveled around, looking for different communes.

RUSSELL: We knew we wanted a particular kind of collective that was in a more natural space, not an urban space, and the history of communes in Scandinavia makes that sort of difficult to find because those collectives ten to be fishing villages.

RIVERS: We also wanted somewhere without a single ideology or a hierarchy among the people, which a lot of them do.

RIVERS: We had a quite specific idea.

RUSSELL: It’s important to say that there’s a level of construction in each part of the film. We brought some of the people to the space.

NOTEBOOK: Such as the lead, Robert A.A. Lowe﻿.

RUSSELL: Yes, and some other folks, musicians and cinephiles. We were looking at Chronicle of a Summer by Jean Rouch and Edgar Morin as a way of organizing conversations, also Robert Kramer’s Milestones, where there’s a bit of performance and direction in arriving at a certain kind of truth.

NOTEBOOK: So it’s fair to say you had a very clear vision at the outset of what which part of the film would be? Where you already familiar with the three locations?

RIVERS: Yeah, they were all kind of found to match the things we were talking about.

RUSSELL: Once we went to find these particular visions, in almost every instance, the thing that we had in mind, that we found, wasn’t directly what you see in the film. We visited some islands in Norway for this particular romantic sublime landscape and it was too much, too beautiful, too easy to understand how someone would occupy the space, so we ended up shifting of this parameters; and something like that happened in every instance.

NOTEBOOK: Yes, the idea of utopia that underlies the film is not about an obvious presentation of the idyllic, it’s more intuitive or instinctual, a state of being. Does each act present an alternative utopia?

RIVERS: I think you can see them as three possibilities, and there’s other possibilities out there as well. The more that we talked about it we got interested in the idea that utopia was something inevitably hard to grasp and that you don’t have to think of it as something that is permanent.

RIVERS: It can be transient—

RUSSELL: —or an activated state.

RIVERS: Once he said that line we always knew it was going to be in the film. [laughs]

RUSSELL: It’s really important that this isn’t a film that suggests one thing, it’s not just a black metal film, a film about a commune, but a combination of things—

NOTEBOOK: —that are equally valid—

RUSSELL: —and in a way are the same thing, there is a certain resonance in each one.

NOTEBOOK: And it’s the lead actor being the one thing that threads them together.

RIVERS: We didn’t want a hierarchy among the three parts. The film is necessarily linear, but we imagine these three things as happening at the same time in parallel.

NOTEBOOK: They interact together as well: there’s a woman in the first act who describes the hypnotic, transcendent power of dancing to trance music and in the third part of the film you capture a different version of what she’s talking about at the black metal show.

RIVERS: The last section could’ve easily been at a techno show.

NOTEBOOK: The sound design is very carefully and effectively constructed. In the last section in particular there's some play with the music being performed de-synchronizes with the slowed down footage of the entranced crowd.

RUSSELL: One reason for taking on a bigger project with a producer like this was to try to go into more technically evolved spaces. Usually we do our own sound work, but this was a chance to expand on that. We worked with a great, wonderful human Nicolas Becker, and in the end Gérard Lamps, the sound mixer for Alain Resnais! So we worked with these stunning artists, and I’ve done some 5.1 mixing, and this is something we wanted to push, to expand the sound as its own landscape as well.

NOTEBOOK: Were there other new ambitions in the film that you wanted to work toward?

RIVERS: Yes, it was definitely one of the reasons to collaborate, to come up with things we couldn’t on our own.

RUSSELL: The commune section was the most ecstatic, the hardest thing to edit as well. We spent time with these remarkable humans, and it was hard to let go of them.

RIVERS: Yes, you would have this amazing woman and how could you cut her?

NOTEBOOK: When the section ends, it’s hard to get over moving on from them. I could’ve watched them for two hours!

RIVERS: It’s better to want to stay with them.

NOTEBOOK: And it’s better to have this jarring switch from act to act.

RIVERS: I think the most insightful thing in the film are those triangle moments.

NOTEBOOK: How long did you spend with the commune?

RUSSELL: About a month.

NOTEBOOK: You must have had a lot of footage.

NOTEBOOK: So that time was mostly spent getting to know them and the space…

RIVERS: And figuring out with them how to go about it.

NOTEBOOK: Do you plan on doing more work together?

RUSSELL: Yeah, I was in Helsinki yesterday, staying with one of the guys from the commune in Spell, the guy who tells the asshole story.

RUSSELL: He’s become a spin-off character for us, we’re going to make a feature with him. We met up and went to a gold mine, and talked about what it is going to be. I think Ben and I will make a film individually in between and then return to collaborate.

NOTEBOOK: What does he do?

RUSSELL: He’s an artist…a traveler, a wanderer...so the next film takes a lot from Buñuel﻿, The Milky Way and The Discreet Charm of the Bourgeoisie, and also The Gospel According to St. Matthew. We’re going to go from Lapland, to Spain, to the end of the world. The most exciting thing I learned from making Spell was realizing how important it is to work with people, and spend time in spaces, you want to spend time with.

NOTEBOOK: It registers on the screen: those feelings, connections, and experiences.