This is the third of four dispatches on some of the goods offered by the 57th London Film Festival’s ‘Experimenta’ section. 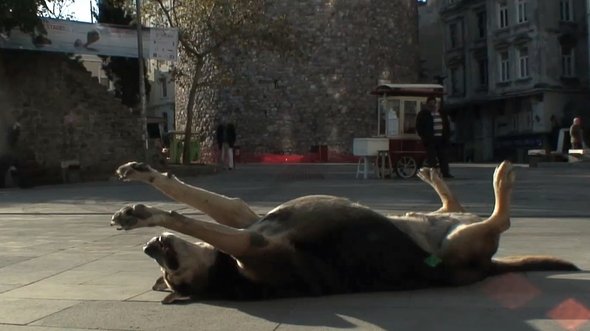 Wherever you go in the world at the moment, stray dogs are very much on the radar. First there was news that the Romanian government had passed a law to euthanize a million strays after a child died in a dog attack. Then there was the Venice Film Festival, where Taiwanese maestro Tsai Ming-liang’s Stray Dogs received the backhanded compliment of effective second prize. Though Tsai’s apparent swansong can be seen at the forthcoming Viennale as well as at Seville European Film Festival next month—with appearances at Toronto and New York already in the bag—the film was a notable absentee when the 57th BFI London Film Festival’s programme was announced. Though many rallied for its late addition, the programming gods proved stubborn.

Enter Taşkafa, the eponymous canine protagonist of a new documentary by Andrea Luka Zimmerman. A Turkish-UK co-production, Taşkafa, Stories of the Street is an effective 66-minute portrait of Istanbul as experienced by humans and canines alike. Though promoted to titular status, Taşkafa is in fact only one of many stray dogs that feature in the film; as multiple characters are introduced and interviewed about their relationship with these dogs—and cats, and birds—the narrative builds a panoramic image of a city whose abandoned pets double as some mirror-image of those human citizens found at society’s more heavily treaded margins.

An early talking head interviewee gets to the crux of the political matter, suggesting that the reason why stray dogs pose a problem to authorities is not because of their physical threat but because homelessness—whether suffered on four legs or two—“destroys the dream”, i.e., that aspired-to symbol of a prosperous city. An Englishman credited as Bill (co-producer Bill McAlister) recounts his initial prejudice toward strays, and then recalls his first encounter with Taşkafa, in which he was firstly prevented from entering a specific part of Istanbul by several dogs, until a local told him to greet and shake Taşkafa’s hand – after which, we’re told, “the dogs melted away” and allowed him to pass.

This amusing image is accounted for, perhaps, by a testimony later in the film by someone who reminds us that, during the Ottoman period, dogs had value as community guardians—and it’s onto this responsibility that the dogs seemingly wish to cling, so as to retain, perhaps, a dignity and self-respect even when relieved of such duties. The film’s anthropomorphist tendencies are infectious: many of Zimmerman’s interviewees speak of these dogs with more affection than they would their fellow humans—which points to the lasting appeal of animals in general, as an equally vulnerable and therefore emotionally compensatory presence in people’s lives.

The notion that pets might be emotional substitutes recalls Ulrich Seidl’s Animal Love (1996), while the general concept of probing a city’s socio-political fabric through its animal population is indebted to (at least) John Berger’s 1999 novel, King: A Street Story—extracts from which Berger himself reads here in voice-over (“all dogs dream of forests, whether they have been in one or not…”). Conceptually, Taşkafa also chimes with John Haptas and Kristine Samuelson’s recent Tokyo Waka (2012). While the latter film framed the spike in Tokyo’s wild crow population as a direct consequence of rising levels of urban waste, Zimmerman’s film sees dogs as an ongoing reminder of inhumane policies enacted by Turkish governments through history.

Late in the film, this allegorical link becomes literal. Zimmerman shows us a plaque dedicated to the tens of thousands of dogs shipped and left to die on the barren island of Hayirsiz Ada by the Union and Progress Party in 1910, and then shows us an image of the Turkish-owned island Yassiada, over which an inscription tells us that in 1960 and 1961 it was the site to which political prisoners were exiled, and on which executed. Stray dogs as a symptom of social abandonment, political exile and economic neglect: in a small way, for 66 minutes at the 57th London Film Festival, the spirit of Tsai Ming-liang’s final bow was present after all. 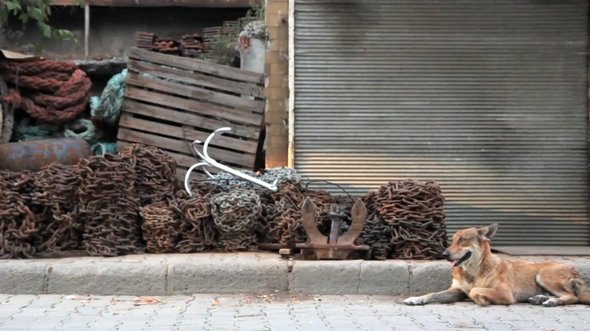