When I started to get really interested in Tony Scott in the 90s, a friend of mine and I used to joke fondly about his signature text inserts of time and place (like “Occuquan Park, Maryland 0645 hrs.” over the very first image of Enemy of the State). Only after Scott fully entered his late, astonishing action painter phase starting with Man on Fire in 2004, did I realize we had instinctively hit on a key element of his work: Having studied art with the intention to become a painter before he ended up as a filmmaker, Scott had in some ways never completely abandoned his original plan—the most evident example being his animation of the Scott Free Productions logo. A similar interest drives his use of fonts and their effect within the design of the image, which also reached a new level in Man on Fire, for instance in his use of subtitles and their placement within the frame. He would even outdo himself (and challenge Godard) in the subsequent great-whatzit-”biopic” Domino not just regarding his use of manic text; but in many ways Man on Fire remains unsurpassed as his most impressive directorial achievement, even as it is not necessarily his best film.

Still, it inaugurated the most fascinating period of Scott's career with a bang—or rather, multiple bangs. In many ways, Man on Fire is the most delirious expression of Scott's curious blend of avant-garde abstraction, manifesting itself through somewhat experimental, often frenzied montage, but even more strikingly in painterly ways—not least all kinds of image manipulation—and traditional action film virtues, being able to create a highly propulsive drive and comprehensible story and character arcs out of elements that are not necessarily so: wildly impressionistic, at times unreadable images, split-second inserts that defy their place in the narrative (or at least, the viewer's mental map of it) or highly modernist effects that call attention to themselves, yet somehow never fully rupture audience identification. Scott had a unique key that enabled him to trangressively shatter the doors of perception, all the while giving the impression he merely opened them.

Man on Fire is full of such stunning sequences, not least the one some 25 minutes in, in which alcoholic protagonist John W. Creasy (Scott's axiomatic actor Denzel Washington), hired as a bodyguard for rich parent's nine-year-old kid (Lu)Pita (Dakota Fanning) in a hellish Mexico City, submits to one of his Jack Daniels-fueled nightmare binges, rotating camera, image flashes, sudden bursts of black-and-white and all, culminating in a suicide attempt he only survives because “a bullet always tells the truth.” Initially set to Linda Ronstadt's “Blue Bayou” (in a previous scene, he picked up a Ronstadt CD at a street dealer), the scene proceeds through different soundtracks, Creasy's deranged state of mind made palpable via voice-over flashbacks, but especially various intrusions of electronic music, going from eerie distortion effects to big-beat-ballistics, before settling on Claude Debussy's “Claire de Lune”—which continues playing, uninterrupted, over the next scene, despite a slight, but unmistakable advance in time and a change in place, exemplifying how the whole film (and subsequent Scott masterpieces) seems born out of its main character's state of mind. Moving on through a handful of other, completely different setpieces, the whole movement nevertheless takes over eight minutes, when a reprise of “Blue Bayou” in different, yet crucially related context closes the brackets. Man on Fire repeatedly unhinges its narrative in similar ways, but never goes off track—yet all its remarkable feats somehow pale in comparison to its opening sequence, which is a narrative unto itself that nevertheless manages to mirror, and thus encapsulate the entire subsequent story (and masterfully announces the singular breakthrough in technique this film represents in Scott's).

Opening with city views of Mexico City, shots of happy, ostensibly wealthy people strolling in the street and a car approaching in traffic, interspersed with various credits and making nearly full use of the arsenal of ferocious filmic and painterly effects applied later throughout the film—including staggering combinations of sped-up and slowed-down motion, blurred movements and freeze frames, repeated light dropouts, strange superimpositions suggesting loss of consciousness and sudden changes to black-and-white—after about one-and-a-half minutes a text insert sets up the plot:”There is one kidnapping every 60 minutes in Latin America.”, reads the first line, with one word appearing after another, before the second (punch)line comes in all at once: “70% of the victims do not survive.” The next two-and-a-half minutes finish recounting one such kidnapping as a high-octane-haze through which the images almost assault the viewer, even as they can be only partially processed (plus, the credits continue as a further distraction). The full impact only becomes clear upon reviewing after the film: not only is the modus operandi of the kidnappers the same as later with Pita (in which the ransom instructions via phone are, in another typical gambit, intercut with their execution, plus some entirely different scenes!), key sentences are uttered and the viewers actually glimpse some of the major players of “La hermandad”, the syndicate of gangsters and corrupt cops responsible for the crimes (and afforded, upon first mention, its own big caption in the image, the only one graced by quotation marks), like some kind of spoiler flashing by too quickly to understand.We have seen, but we are blind.

In a masterstroke, this jaw-dropping credit sequence is capped by the image of the kidnapping victim set free, tied and blindfolded, with huge stains blood from his cut-off ear, on the middle of a rush-hour motorway, his cries for help buried under roaring traffic passing by, all drivers studiously ignoring this shocking sight. Cut in closer, to a grainy freeze frame, as the last credit approaches: “Directed by Tony Scott.”﻿ 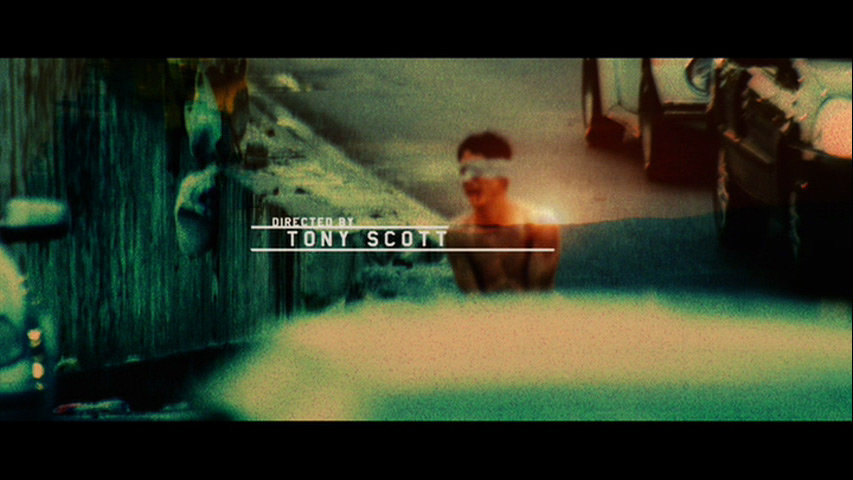