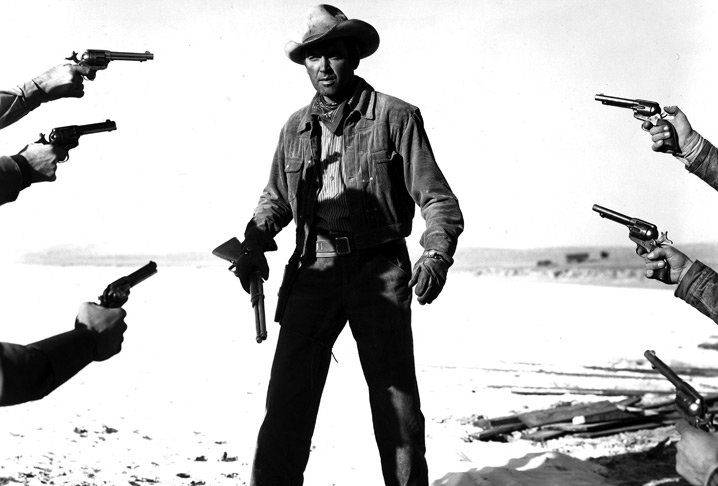 Mann’s Westerns present “both beautiful landscapes and the explanation of this beauty, both the mystery of firearms and the secret of this mystery, both art and the theory of art.”
– Jean-Luc Godard

Anthony Mann is one of those directors admired by cinephiles but not well known to the casual moviegoer, the cinematic equivalent of what we call a “writer’s writer.” He made great movies in more than one genre – most famously his film noirs with the cinematographer John Alton and his Westerns with Jimmy Stewart—but unlike Welles, Ford, or Hitchcock, he never made that one decisive masterpiece that critics could stamp as the culmination of a career. Mann himself said he wanted to make simple stories with “pictorial interest,” comparing himself with Erich von Stroheim, whom he directed in a cheap thriller for Republic in 1945: “He drove me mad. He was a genius. I am not a genius. I’m a worker.” Ironically, it is this very workmanlike efficiency that makes his oeuvre so fascinating for the ardent collector: because, in order to really appreciate him, you need to see a lot of his films, almost all of which are good.

Mann’s career falls neatly into four periods—B movies from 1942-1947, film noirs from 1947-1950, Westerns from 1950-1960, and epics from 1960-1965—and most critics agree that it’s the second and third periods that are the most interesting. Those two groups share some recurring themes—masculinity, violence, paranoia, and revenge—but they’re also remarkable for how different they are. This is partly due to generic conventions, but also to the influence of Mann’s two great collaborators: Alton and Stewart. At the risk of offending the old-guard auteurists among us, I think it’s fair to say that no one would really care all that much about Anthony Mann today if it weren’t for those two men. (Though, to be fair, I think it’s fair to say that no one would care that much about Alton if not for Mann, and, well, everyone would still revere Stewart).

John Alton is one of the greatest cinematographers who ever lived. His book Painting with Light (1949) was the first great guide on how to shoot pictures. He was a Hungarian émigré, a sophisticated aesthete who wore a beret and who named Rembrandt as his greatest influence. Some people seemed to think he was a tad egotistical, though, which hampered his advancement at M-G-M; besides the ballet scene in American in Paris, he rarely had the opportunity to experiment as much as he would have liked in big budget color films. But the quickies he made with Mann (T-Men, Raw Deal, Reign of Terror, Border Incident, and Devil’s Doorway—only the first two of which are film noirs in the traditional sense) contain some of the most inventive black-and-white cinematography anyone has ever seen.

Likewise, Mann’s 50s Westerns are partly the product of Jimmy Stewart’s artistic and financial ambitions. Stewart solidified his power in the 50s thanks to his agent Lew Wasserman, who signed him to a profit-sharing deal with Universal-International in lieu of a salary on Winchester ’73. This contract made Stewart rich, Wasserman powerful, and every other star in Hollywood eager to sign a similar deal. Stewart’s contract, as much as the Paramount Decree of 1948 and television’s increasing stupefaction of the American psyche, led to the demise of old Hollywood, shifting power from studio heads to stars and their agents assembling package deals. Stewart chose Mann as a last-minute replacement for Fritz Lang on Winchester ’73 and they went on to make seven more films together – most of Mann’s best work from the decade. Still, it’s tempting to imagine how history might have been different—like a DC comics alternate universe—if Lang had gone on to direct The Naked Spur and Mann had done The Big Heat. Both men were good with tough, unsentimental stories. I can imagine Lang shooting The Naked Spur almost exactly as it now exists. I can also imagine Mann shooting the scene where Lee Marvin scalds Gloria Grahame’s face with the same brutality, but the chiaroscuro would have been much more exotic, with or without Alton, one reason I think I’m more interested in Mann than I am in Lang.

I lied a little bit when I hinted that no one agrees on which of Mann’s movies are the best. Both of Mann’s leading scholarly exegetes – Jim Kitses and Jeanine Basinger—lean toward The Naked Spur and Man of the West. Jonathan Rosenbaum also championsThe Naked Spur. IMDb voters (the voice of the people!) have Winchester ’73 at the top of their list. Mann himself though his best films were Winchester ’73, El Cid, God’s Little Acre, and Men in War. My favorites are T-Men, Reign of Terror, The Man from Laramie, and Men in War, but I’ve been told that I can be willfully contrarian, so take my advice with a bit of salt. Nevertheless, any interested cinephile should see as much as he or she possibly can. Here are some of my suggestions:

Bruce Goldstein’s Film Forum blurb calls The Man from Laramie the King Lear of the West. Jim Kitses compares it to Oedipus Rex. Jeanine Basinger likens it to Greek tragedy. You get the idea: the story is primal. Donald Crisp plays the patriarch of the biggest ranch around. (Yes, that Donald Crisp, the same guy who starred in Broken Blossoms, How Green Was My Valley and who directed—yes, directed, people!—Douglas Fairbanks in dual roles in Don Q, Son of Zorro (the scene where Fairbanks swordfights himself at the end is without question the most ingenious use of the optical printer in 1925). He built an empire through cruelty and now near the end of his life as he’s going blind (get it? a metaphor), he’s come to realize that the very cruelty that was necessary to build his empire was responsible for turning his son into a vapid thug. His lead ranch hand is a surrogate son and a much more decent man. But Crisp is torn by his shame and love for his son. Jimmy Stewart is the man he’s seen in a dream who will come to take his son away from him. Good stuff.

America’s general confusion about the purpose and outcome of the Korean War inspired some of the most nihilistic war films, and since hopeless cynicism may be the most ethical response to military conflict, Korean war films are the best (see Steel Helmet orPork Chop Hill, for instance; even a glossy melodramatic one like Mark Robson’s The Bridges at Toko-Ri has one of the most downbeat endings I’ve ever seen). Men in War stands at the pinnacle (along with Sam Fuller’s underappreciated Fixed Bayonets!) of what I call the Men-Trying-to-Take-a-Hill-in-Korea-Proves-That-War-is-Senseless mini-genre. It’s a cheap, ugly film with no heroes and lots of senseless death. Like all decent, law-abiding citizens, I’m a big fan of movies where everyone dies. This is one of them.

But whatever you do, don’t miss Reign of Terror, one of the most fascinating genre hybrids anyone has ever seen: a film noir about the French Revolution. Because of its oddness, everyone who writes about Mann seems embarrassed to admit how much they like it: Basinger calls it a “personal favorite”; only Richard Corliss has the temerity to call it Mann’s “masterpiece.” The independent producer Walter Wanger was trying to make a cheap A film or an expensive B-film for the distributor Eagle-Lion, which had been tossed around between J. Arthur Rank, who was trying to break into the American market, and a guy named Arthur Krim, but this was just at the moment when Wanger’s career was disintegrating under siege from the IRS. Because of these odd production circumstances, Mann and Alton had freedom to experiment. And they did. The movie includes some of Alton’s most imaginative work—the inkiest of shadows, the most canted angles, mirror reflections that create the illusion of depth, and some amazingly creative rear projection work in the crowd scenes. The male and female leads aren’t as charismatic as you’d like, but their dullness gives the film a sense of brutal despair rarely seen in a historical costume epic.

Border Incident is great for the scene with the quicksand, the scene with the tractor, and the always incredible presence—though too brief here—of Ricardo Montalban, an actor who had almost as much natural gifts as James Dean or Marlon Brando but who was never offered the right combination of great director, great script, and great part. Raw Deal is great for Claire Trevor’s hauntingly disillusioned voice-overs accompanied by a hauntingly disillusioned theremin. If you’re interested in his B pictures, stay away from the musicals and try out The Great Flamarion (with Erich von Stroheim), Strange Impersonation, or Stranger in the Night. Or at least, that’s what Basinger says. I haven’t seen them yet. We have work to do.