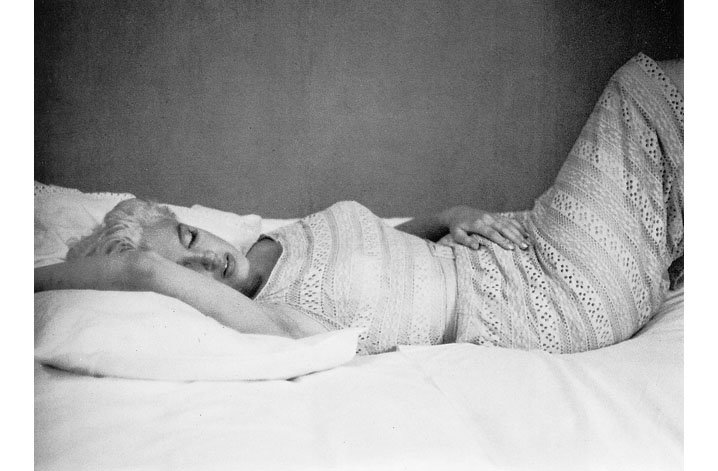 Photo via everyday_i_show. See more at all things amazing.

Despite how much she has been dissected, analyzed, and worshipped, something about Marilyn Monroe remains forever elusive. Nearly fifty years after her death, this magnetism is often mapped out in a series of ironic juxtapositions: she was a fragile child and a sex goddess arousing both maternal love and intense desire; she was universally adored and felt entirely alone.  But it is far better to lose oneself in the mystery of Marilyn than to try to define her.

— Jocelyn Heaney on Fragments for the Los Angeles Review of Books

She was a very peculiar mixture of shyness and uncertainty and — I wouldn't say "star allure," but, let me say, she knew exactly her impact on men. And that's all.

She was not the first sex goddess with a trace of somnambulism; Garbo was often a little out of it, Dietrich was numb most of the time, and Hedy Lamarr was fairly zonked. But they were exotic and had accents, so maybe audiences didn't wonder why they were in a daze; Monroe's slow reaction time made her seem daffy, and she tricked it up into a comedy style. The mystique of Monroe… is that she became spiritual as she fell apart.

You gave Jane two rehearsals and she was as good as she was going to be. With Monroe, the more you kept going, the better she got.

— Howard Hawks on Gentlemen Prefer Blondes (1953), in Bogdanovich's Who the Devil Made It

Even before Marilyn Monroe was found dead in Hollywood on August 5 [1962], James Rosenquist took the President's sometime inamorata for a subject. Scarcely had the goddess given up the ghost than Andy Warhol was opportunistically silk-screening the star's fetishized image — her image as image — for his first New York one-man show. The now-iconic MM assumed her place beside PT-109 and Agent 007 in Kennedy mythology.

— J Hoberman in The Dream Life: Movies, Media, and the Mythology of the Sixties

Marilyn Monroe had no confidence in herself. She found it very difficult to concentrate, and she really didn't think she was as good as she was. She'd worry about all kinds of things, and she would do the very difficult things very well. Sometimes she was very distracted and couldn't sustain it, and you had to do it in bits and pieces; sometimes she was in such a state of nerves that you'd have to shoot individual lines. But such was her magic that you'd pull them all together and they seemed as though she spoke them all at one time. She was a real movie personality — a real movie queen.

— George Cukor in Who the Devil Made It