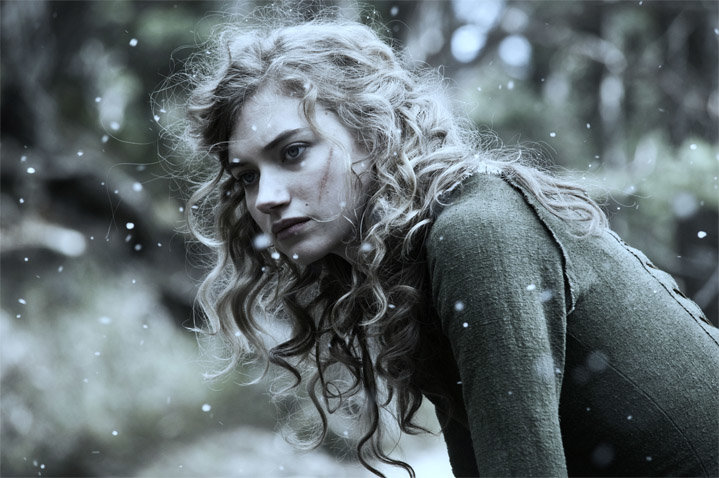 Neil Marshall's men are numerous and largely interchangeable—grizzled genre types vaguely sketched, owing a lot to Hawks-by-way-of-Carpenter-and-Cameron and to the supporting casts of countless horror and war movies—but he's careful in designing and meting out his female roles, which is probably why The Descent, whose leads are all women, feels like his most fully-realized film character-wise. It can be assumed then that what interests Marshall is the surface of the world of men (the aggressive banter, the dynamics of groups, the various codes and allegiances imposed upon men which they must then either follow or break), and the interior of the world of women. No surprise then that his men are more often than not soldiers, and that their characteristics blur together, ironically recalling a line Leo Gordon utters about women in Gun Fury: "As far as I'm concerned, they're all alike—they just got different faces so you can tell them apart."

Actually, that mad-dog 3-D Walsh Western is very pertinent here, because it depicts a world ruled by men who speak largely in cynical aphorisms through the perspective of two women (Donna Reed as the displaced Southern belle, Roberta Haynes as the spurned Mexican lover) who are forced to find their place there. Gordon's eventually-redeemed bandit doesn't say that line in earnest, but he says it to blend in with his misogynist badmen buddies (image-of-the-film: Phil Carey dragging Reed behind his horse with a rope around her waist); the words remain true of the environment, if not the character, and thus find an echo in a scene in Marshall's new film, Centurion, when, in one of those moments when the film switches to "ridiculously-hardboiled Roman noir" mode, a legionnaire says that Imogen Poots is "a Pict and a woman, two good reasons not to trust her." Michael Fassbender, our fine and upstanding / indistinguishable-from-other-characters hero, dismisses the idea that she'd betray them to their Celtic pursuers. Her female treachery remains implicit. Marshall doesn't have gynophobia, but his men all seem to. In one scene, the soldiers all drink deer blood together; in another, Fassbender frets about Poots watching him piss.

Poots (a surname I have trouble typing with a straight face) is one of the film's two major female characters. You could even say that she's one of the only two characters in the film, since she and Olga Kurylenko's mute warrior (also "a Pict and a woman," and in fact treacherous) are the only ones who are defined by their actions or even manage to affect the plot, while the men are largely defined by their degrees of survival and adherence to vague macho hokum. So amongst all the Gladiator-inspired military-brotherhood corniness (which I'm sure Marshall believes in to a certain degree) and the aesthetic jumbles (swords-and-sandals establishing shots that all look like matte paintings circa 1960, grisly gorehound violence, canted angles, '70-style zoom lurches, TV head-and-shoulder dialogue intercutting, even some Grandrieuxian shots of Fassbender running in the snow), there is Poots as a woman who's been left alone because everyone thinks she's a witch and Kurylenko (who has exactly one facial expression: dismissive anger) as a subdued loner variation on the heavy Marshall had Lee-Anne Liebenberg play in Doomsday. The men represent a sort of machinery, their actions dictated by their positions and by the traditions of genre, which will run inevitably; the distinctive and independent women make decisions. The men may have allegiances, but the women have something better: principles.

After Gordon's tough-talk in Gun Fury, another scene in another film comes to mind: the deluded speech Matthieu Amalric blurts out to Catherine Deneuve in Kings & Queen, one of those Desplechin moments where a likeable character does his or her best to become unlikeable. Amalric informs Deneuve that she has no soul because men live in straight lines while women exist in bubbles of experience—in short, that men live to die and women live to live, and that the soul exists in the awareness of dying. It's possible to imagine a similar speech coming from Marshall, albeit one that draws different conclusions: that the straight-line patriarchies men create for themselves trap them, whereas women, as permanent social outcasts, are free. The women are able to simply be themselves while men lose something because they must always also be Men. And this in turn raises the question of whether Marshall's characterizations of women are the product of a dubious oppression fetish.