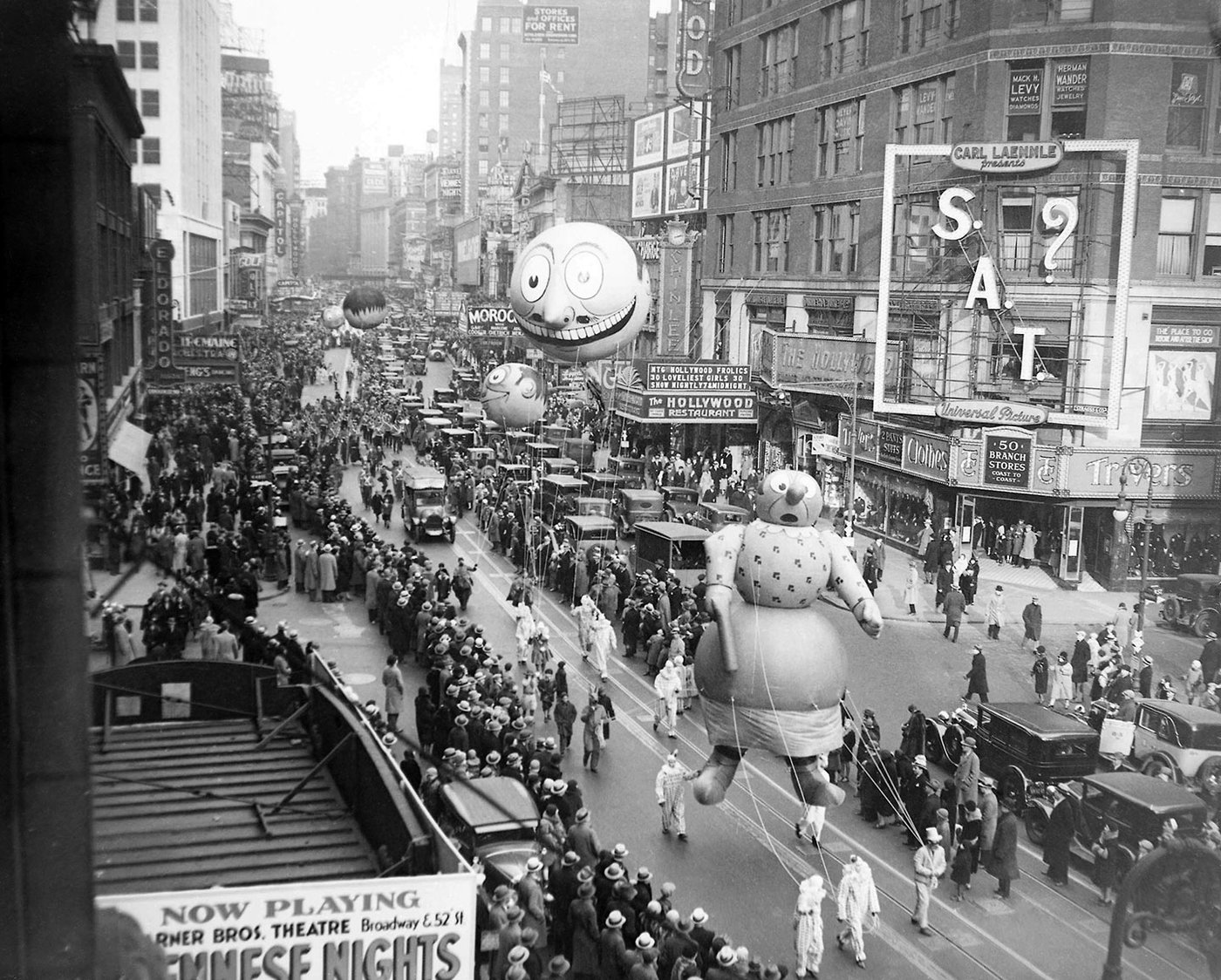 This incredible photograph appeared yesterday on a post on The Wire titled “﻿The Macy’s Thanksgiving Parade Balloons Used to Be Extremely Creepy.” I immediately loved the photograph with its Frank Sidebottom-style floating heads but what caught my attention next is the sign just visible behind the head in the middle: a marquee for Josef von Sternberg’s Morocco. Now if there’s one thing I love more than bizarrely primitive helium-filled heads, it’s old photos of movie marquees. And if there’s one thing I love even more than that, it is examining the often-missed details of old photos and looking for clues to their place and time. (Anyone who’s a fan of Shorpy will know what I mean.)

The only specific detail on the original post is that the photo was taken in 1930, a fact that the Morocco marquee confirms. This means that it was only the seventh Macy’s parade (the first, in 1924, had featured animals from the Central Park Zoo rather than balloons, with the first balloons appearing three years later.) 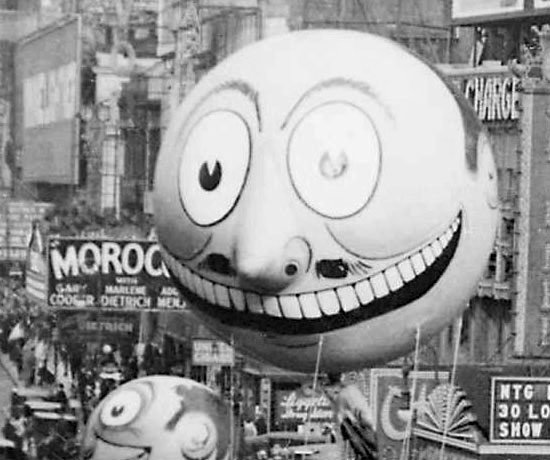 The 1930 Parade would have taken place on November 27. Morocco had been released in New York just thirteen days previously on November 14. Marlene Dietrich would not yet have been a huge name even though she gets equal billing with Gary Cooper who had become a major star the previous year with The Virginian. The Blue Angel, Dietrich’s first collaboration with Von Sternberg and the film that launched her as a star, had premiered in Germany on April 1st of 1930 but was not released in the US until December 5, a week after this photo was taken.

There is another marquee in the left foreground, advertising what can just be divined to be Viennese Nights. Directed by Alan Crosland, who had helmed The Jazz Singer, and thus helped usher in the dawn of sound cinema three years earlier, Viennese Nights was a﻿ Technicolor operetta﻿ that was written and scored by Oscar Hammerstein II (with Sigmund Romberg) and produced by Richard Rodgers, thirteen years before their first official Rodgers & Hammerstein collaboration on Oklahoma! Viennese Nights was released on November 26, 1930, just the day before Thanksgiving. Just visible on the high-res version of the photo, another sign for the film can be seen high above the Morocco marquee. Though Viennese Nights was one of the earliest all-Technicolor features, there were actually over 20 full-color, full-length films made between 1929 and 1931, an expensive craze that was halted by the Great Depression, the first grumblings of which would have been felt in 1930. 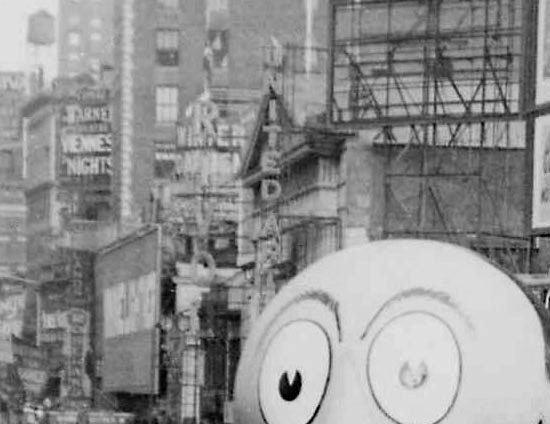 The most prominent marquee in the photograph is that for The Hollywood Restaurant advertising “Hollywood Frolics” with “30 Loveliest Girls.” (Anyone know what “NTG” at the start of that sign means?) 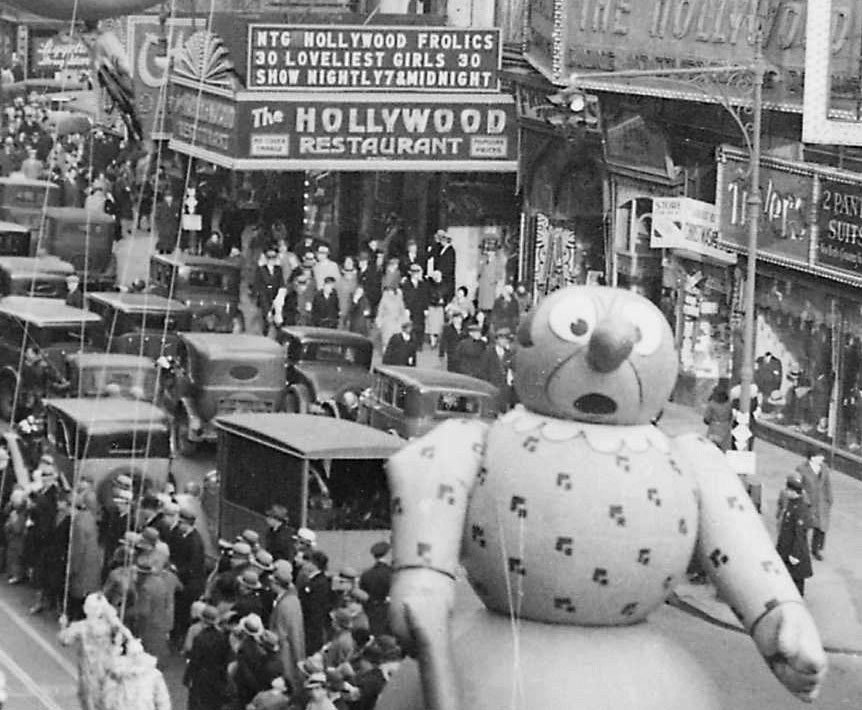 The one clue to the exact location of the photograph is the store on the right hand corner. 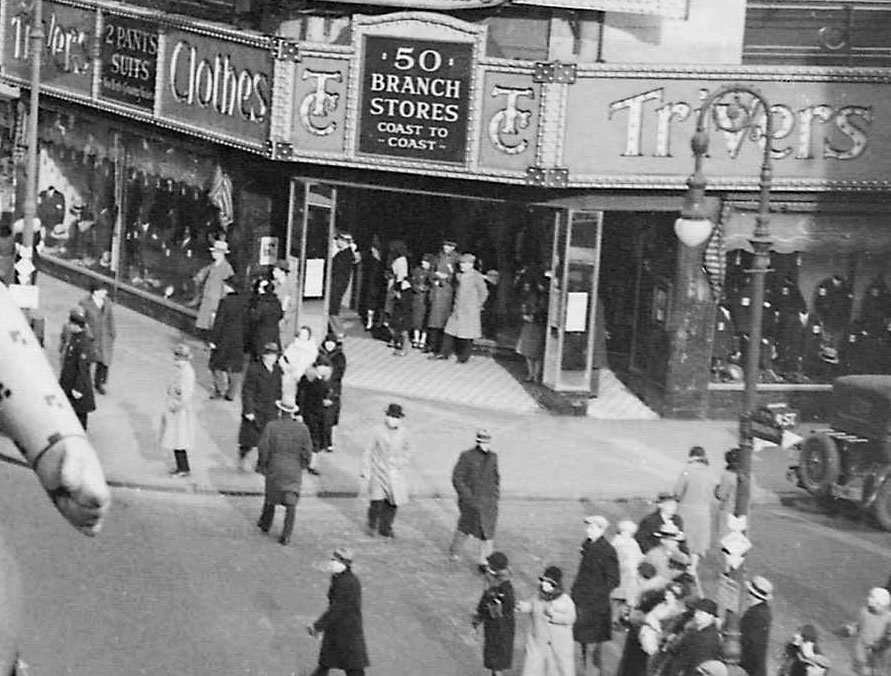 I found an advertisement archived online for Trivers Clothes from a 1921 edition of the Milwaukee Sentinel (back when the company had only 27 Branch Stores not the 50 it had nine years later). The ad for the Milwaukee branch mentions “2 New York Stores: Bway at 11th St., Bway at 48th St.” and an “...8 ST.” is just visible on the street sign on the right. 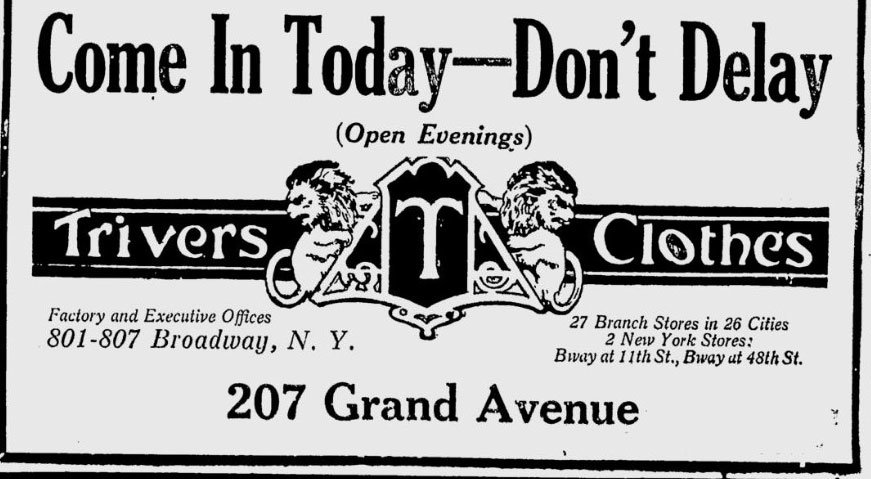 Since the parade would start in Harlem and make its way down to Macy’s on 34th Street, the camera is obviously facing North, so the Morocco marquee must be at Broadway and 49th Street. (There are no movie theaters on that block today, though the Broadway Screening Room used for critic screenings is very close to where Morocco was playing. Trivers Clothes corner is now occupied by M&M World.)

But there is one movie-related mystery in this photo which I have not been able to solve which is the sign right above Trivers. 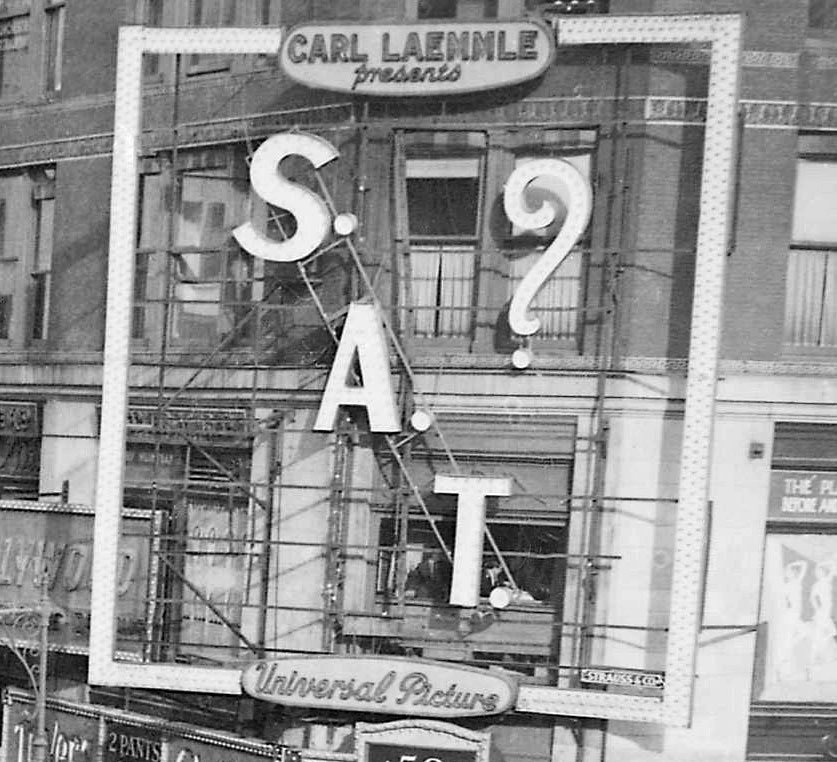 I have not been able to find any mention of a film called “S.A.T.” nor any film produced by Carl Laemmle or released by Universal in 1930 or 1931 that had those initials. Even though the Scholastic Aptitude Test was introduced in 1926﻿, I doubt the sign refers to those S.A.T.s. The sign has a question mark so it seems to be some sort of a teaser. If anyone can shed any light on this I would love to hear it.

Postscript: David Verdeure cracked the code! It seems pretty certain that “S.A.T.?”﻿ was advertising See America Thirst, a Harry Langdon bootlegging comedy that was released on November 23rd, 1930, four days before Thanksgiving. It obviously had a huge promotional campaign behind it, because I found this wonderful lobby display for the film (on a blog devoted to Depression Era Theaters in Lexington Kentucky.) 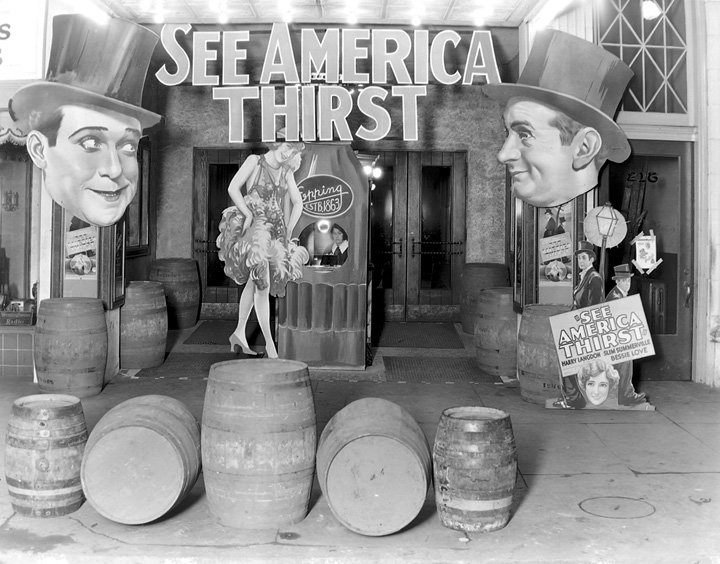