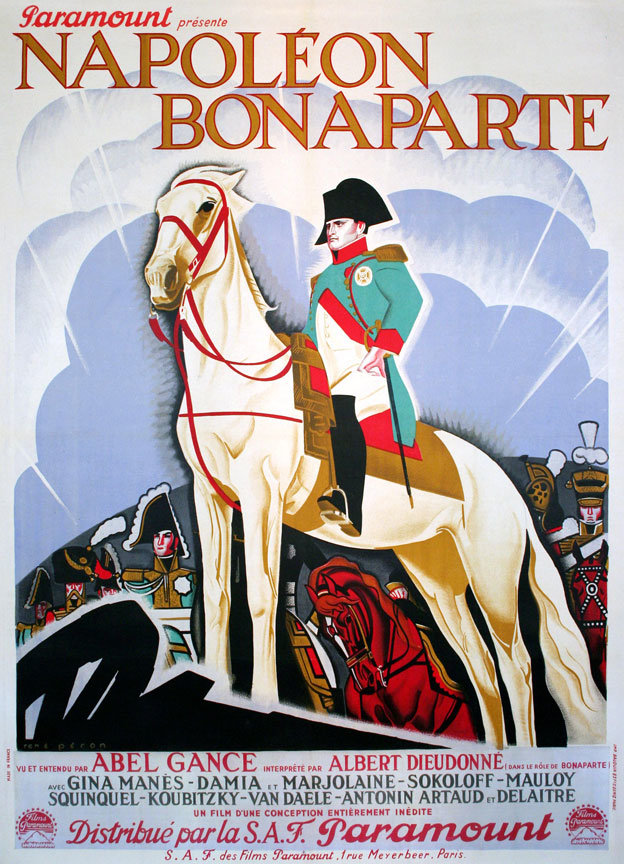 After the first screening of the restored Napoleon, Abel Gance’s beleaguered 1927 masterwork, at the Empire Leicester Square, London, on November 30th, 1980, the director of the British Film Institute Anthony Smith was quoted as saying “After Sunday the world will be divided into those who have seen Napoleon and those who haven’t.” The world of the haves over the have-nots expanded to the US the following year when Francis Ford Coppola famously brought Napoleon to Radio City Music Hall to be performed with his father’s score, but in the intervening three decades the film has not been seen again in the US. Come March 24th, however, thanks to the San Francisco Silent Film Festival, the world will once again be divided between those who have and those who haven’t when the film returns to the US for four screenings of Kevin Brownlow’s complete restoration—accompanied by Carl Davis’s score and a full orchestra—in Oakland’s extravagant Art Deco movie palace the Paramount Theatre, which, like Napoleon itself, has to be seen to be believed.

Kevin Brownlow’s amazing story of his lifelong quest to restore Napoleon to its former glory is recounted in his essential 1983 book of the same name and it’s as thrilling a story about film restoration—complete with heroes and villains, unexpected twists of fate, eleventh-hour rescues and tear-inducing happy endings—as you will ever read. Over the past few weeks I’ve felt a little like Brownlow himself ﻿as I’ve searched high and low for posters for the film, encountering bureaucratic obstacles and the kindness of strangers along the way.

Brownlow himself, though he has been very helpful in this quest, has said that “the posters are the only thing I don’t like about Napoleon” and his book features only one design, a black and white MGM poster (more on which later).

The problem with posters for Napoleon is that the film existed in so many different versions that it is often hard to place the various designs in the correct era.

The first posters for the film in 1927 don’t look like movie posters at all. Painted by military artist Georges Scott (1873-1943) to look like grand framed paintings, they don’t feature anything in the way of titles or credits. The full-length two-panel portrait, which is 94" x 63", simply has a nameplate that reads “Napoléon Bonaparte” while the stunning 4-panel poster, which is 94" by 126" (over 10' wide), has the caption “Rouget de Lisle singing The Marseillaise for the first time to the people of Paris.” It’s more like the world’s largest lobby card. 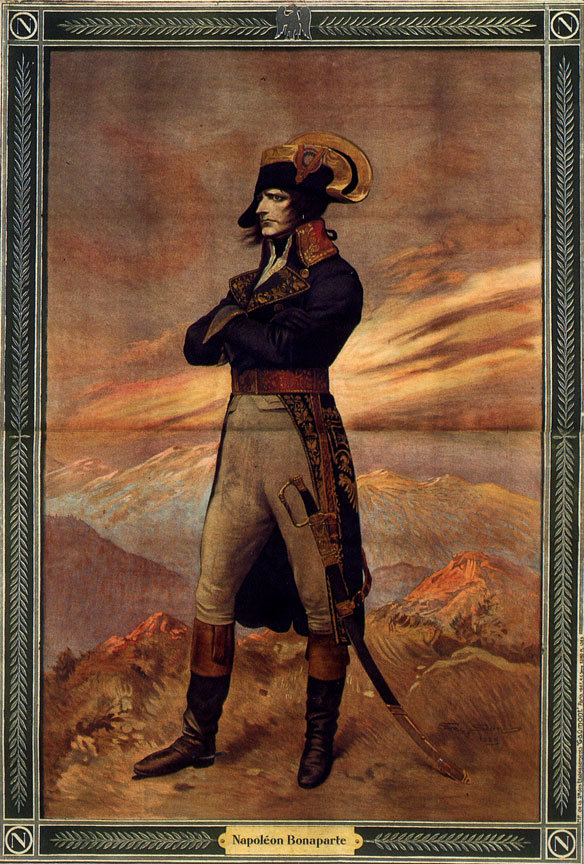 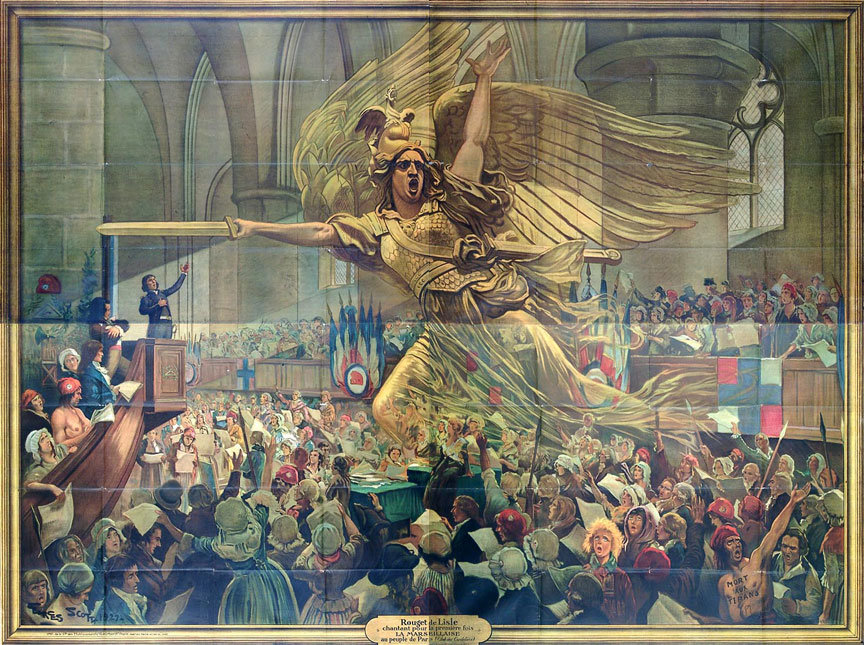 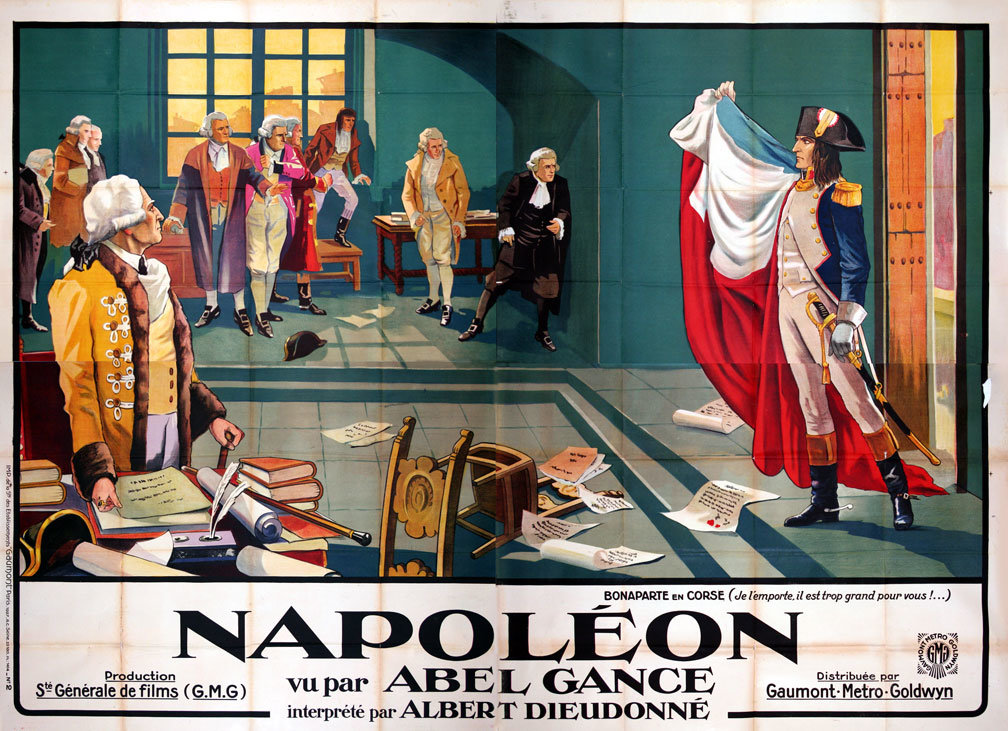 This poster, more recognisably a movie poster, is also from 1927 and also a giant 4 panel piece (click on both the above to see them large and in detail), though I have little more information about it.﻿

Napoleon had its triumphant world premiere in Paris in April 1927 at the Paris Opéra in a four hour version, and was then screened a month later in a version twice as long, twice only, for trade and press. Though it lacked the celebrated triptychs (the tinted, three-screen finale to the film) which will be shown in all their glory in San Francisco, this is the version that Kevin Brownlow has spent 50 years trying to piece back together.

In October of 1927 a shortened version of the film (under 3 hours but with the triptychs) was distributed in Germany by UFA, who also released it in Central Europe. I would hope that the striking German and Hungarian posters below are from this period though I can’t be sure. 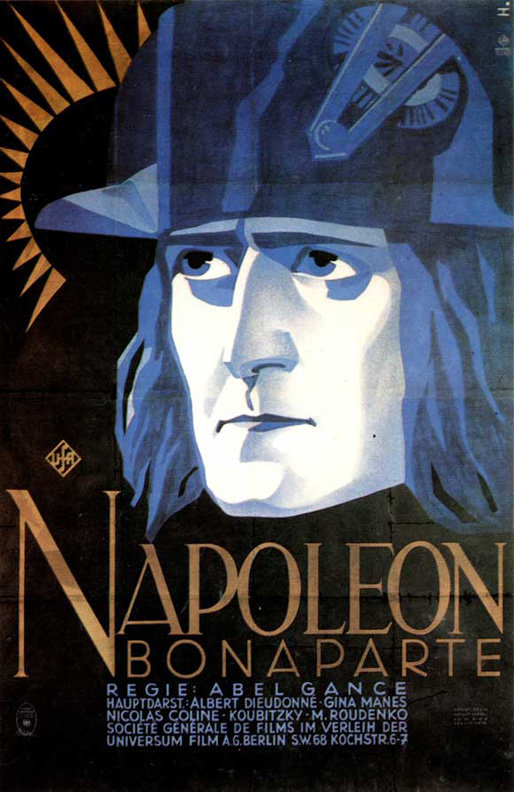 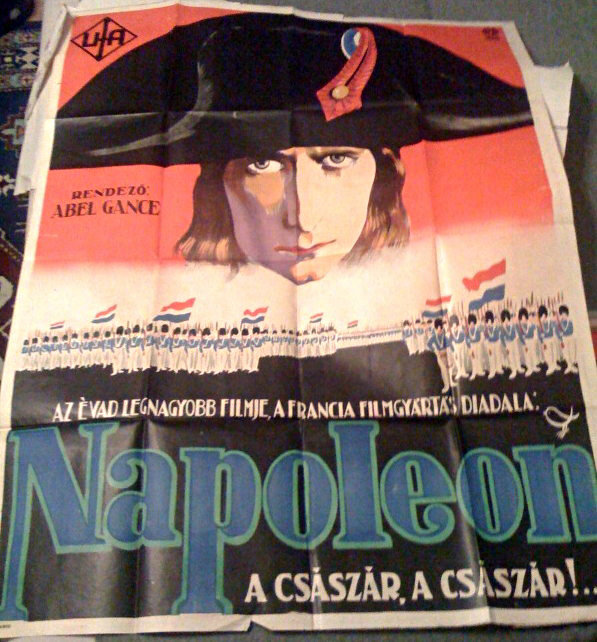 The MGM release of the film in the US in 1929, in a bowdlerized version, was a notorious disaster. Apart from this lobby card, the only posters I can find from that release are in black and white. 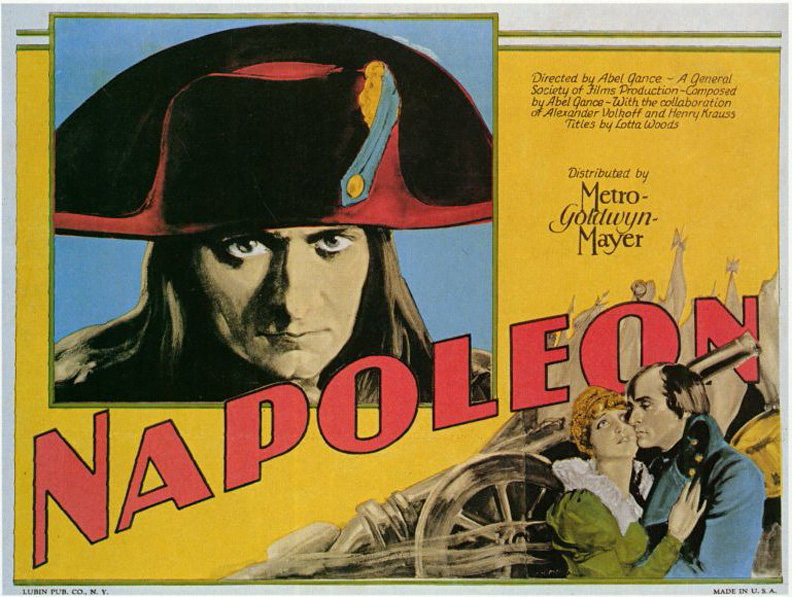 Brownlow says of the poster below right that the characters in the poster (and in the lobby card above) were actually “suggested by adverts for a forthcoming historical picture, Divine Lady” (a film about Lord Nelson and Lady Hamilton) and not from Gance’s film at all (a resemblance can definitely be seen here). Brownlow goes on to say “[Albert] Dieudonné’s hair was adjusted on press advertisements to make him resemble the Napoleon more familiar to Americans; they even painted his hand inside his coat.” (Which reminds me that I did especially enjoy the Napoleon reference in The Artist). 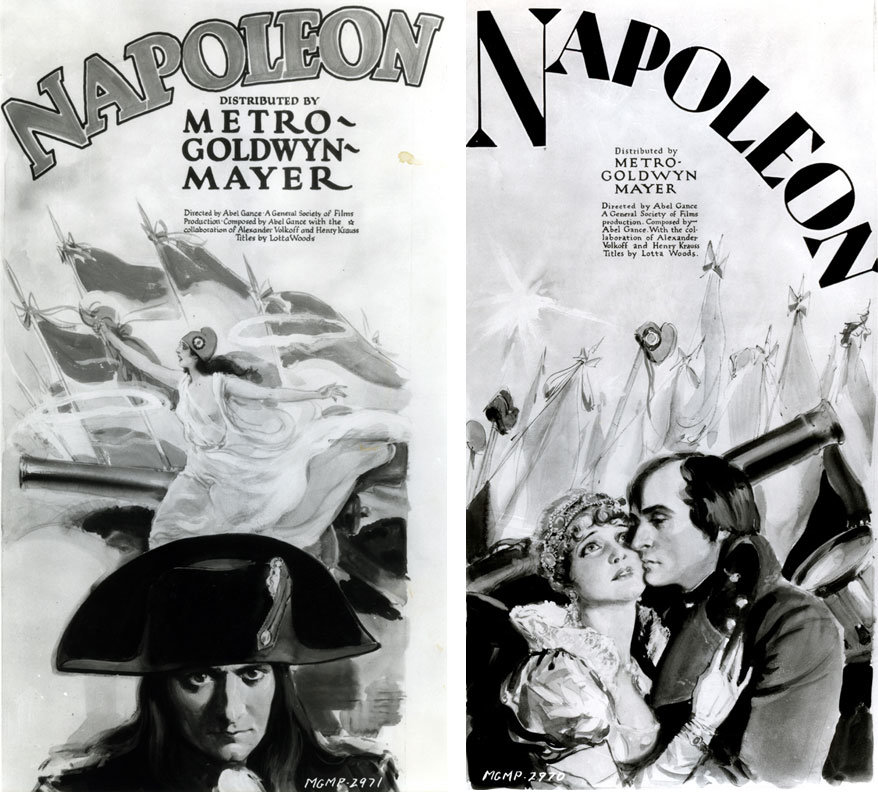 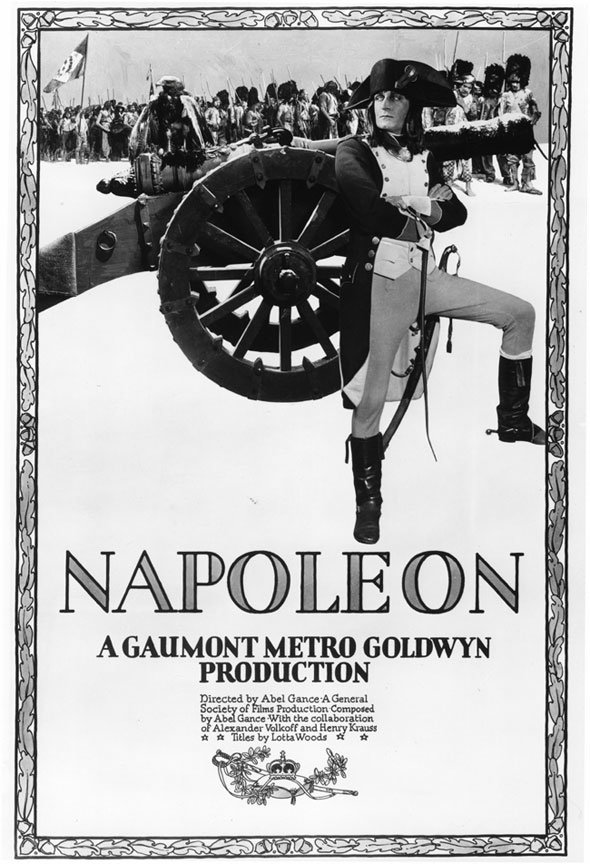 In 1929 Pathé﻿ re-released Napoleon back in France, in a shortened form, for rural audiences. In 1926 Pathé﻿ Cinema and the French Government had joined forces to launch Pathé﻿-Rural which would distribute films on the much cheaper 17.5mm gauge in the hinterlands of France. According to Heritage Auctions, which sold perhaps the only original copy of the poster below in 2010, “17.5 mm film could be produced for only 75% of the cost of the regular 35 mm, and being thin enough in construction as to allow over one thousand showings with neither projection damage or without the audience being able to see any difference in quality between the two gauges. This smaller gauge was used in special projectors in small villages and the countryside with populations of less than 5,000 people.”

Brownlow has said that these rural screenings had “a disturbing whiff of right-wing politics – the films chosen tended to be nationalistic, like the de Gastyne Merveilleuse Vie de Jeanne d’Arc [which, coincidentally, David Cairns wrote about on the Notebook just yesterday] and Henry-Roussell’s Napoleonic epic Destinée.”  ﻿ 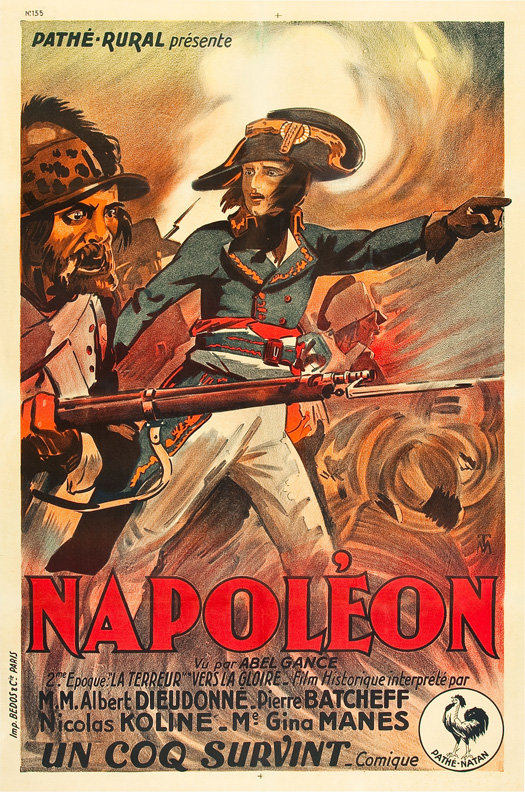 The Pathé﻿-Rural release was in two parts. The posters below (the second one a cruder variation of the poster above) are actually printed with the date of their showings in April 1931, one week apart, in the tiny southwestern town of Villecomtal-sur-Arros (current population 816). If you click on the posters to enlarge them you can read that the first part was screened with a comic short, a film about acrobats and a documentary film about Japan! The Pathé﻿-Rural posters were painted by Maurice Toussaint﻿. 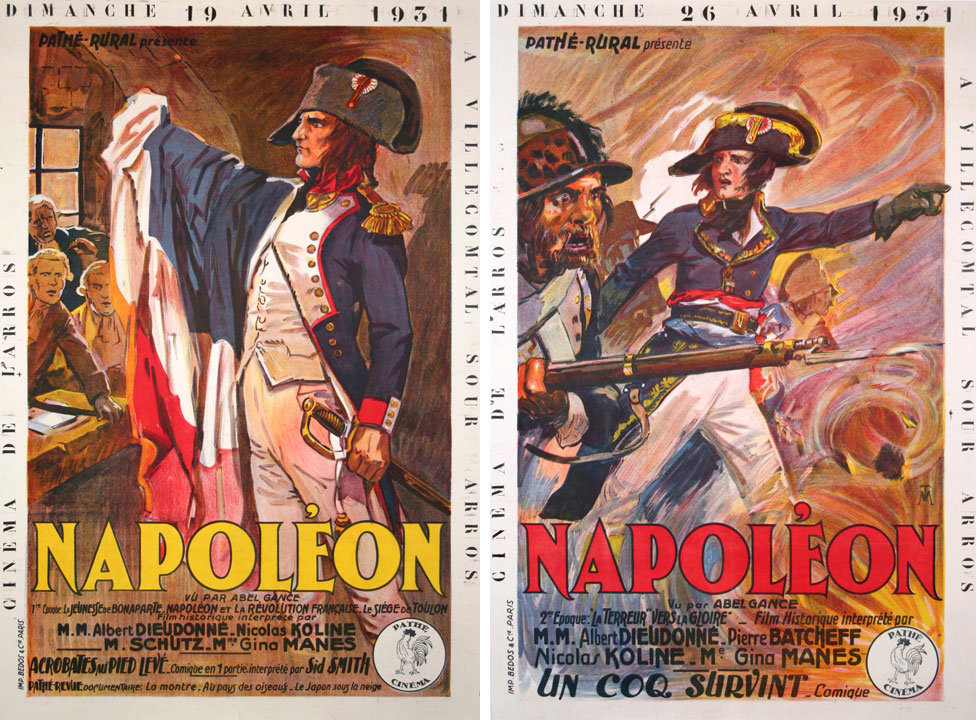 In 1935 Abel Gance made a sound adaptation of the film which was titled Napoleon Bonaparte vu et entendu par Abel Gance. Two of my very favorite Napoleon posters, seen below and at the beginning of this post, are both for the sound version, and both by the great René Peron (1904-1972, perhaps best known for his 1956 ...And God Created Woman.) 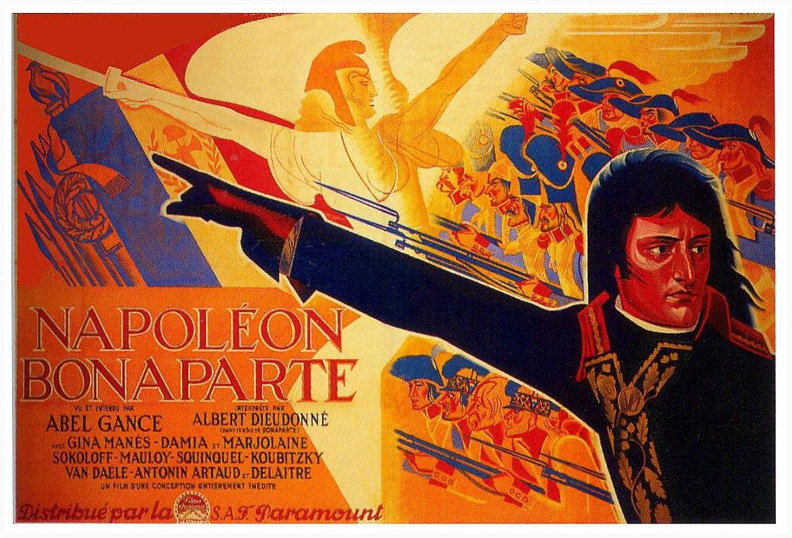 I’m not sure of the exact provenance of the poster below which I have seen listed as 1950, although there was no French re-release of the film that year as far as I know. The poster is by Duccio Marvasi, who was certainly working in the 40s and 50s, and is based on the famous 1796 painting “Bonaparte au Pont d’Arcole” by Antoine-Jean Gros.﻿ 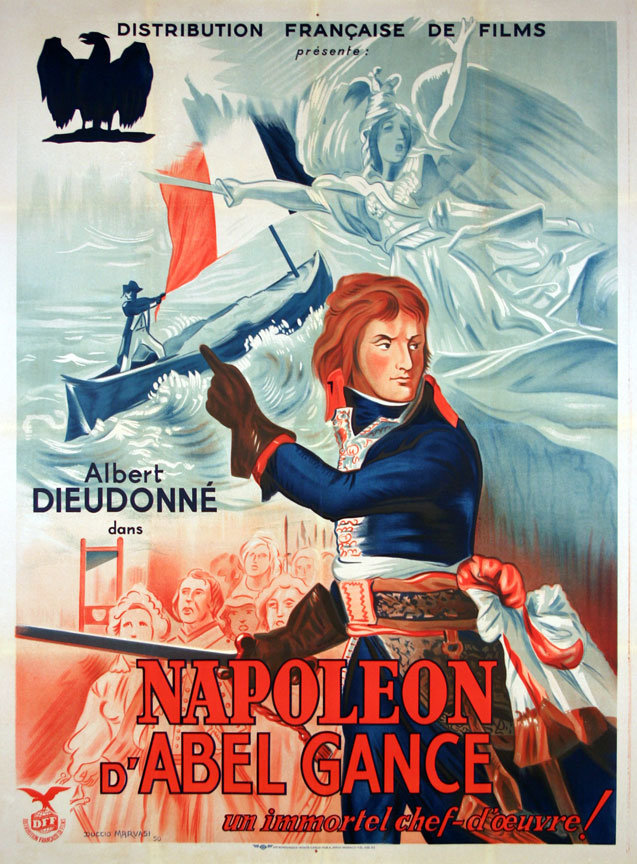 I have found no good version of the poster for Gance’s ill-advised 1970 re-edit/re-make Bonaparte et la révolution﻿, produced by Claude Lelouch, beyond this. But there are plenty of versions floating around of the dramatic poster for Zoetrope’s Radio City screenings of the restoration in 1981, as well as for its national roadshow release that year. 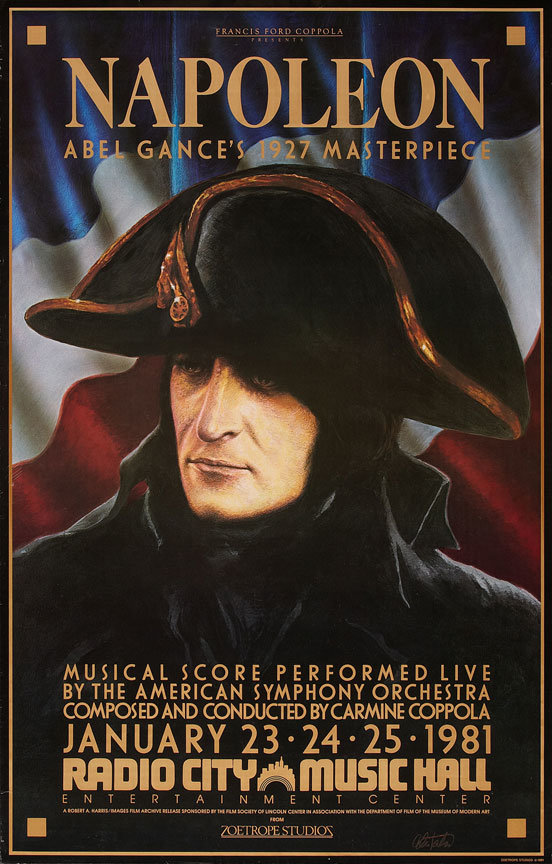 But I am actually more partial to the dramatic simplicity of this British quad for Brownlow and Carl Davis’s June 2000 revival at the Royal Festival Hall. 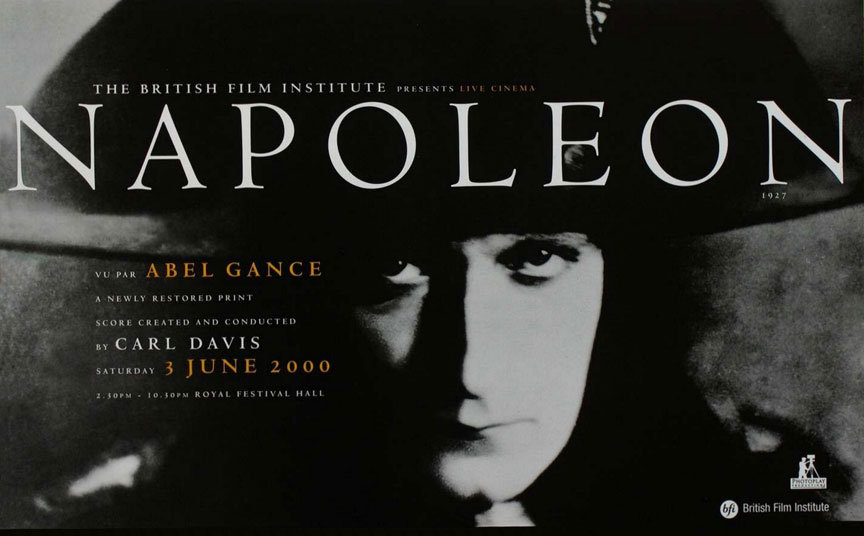 Which brings us to the present and the tri-color portrait of Albert Dieudonné on the San Francisco poster by the great Paul Davis, best known for his New York theater posters. 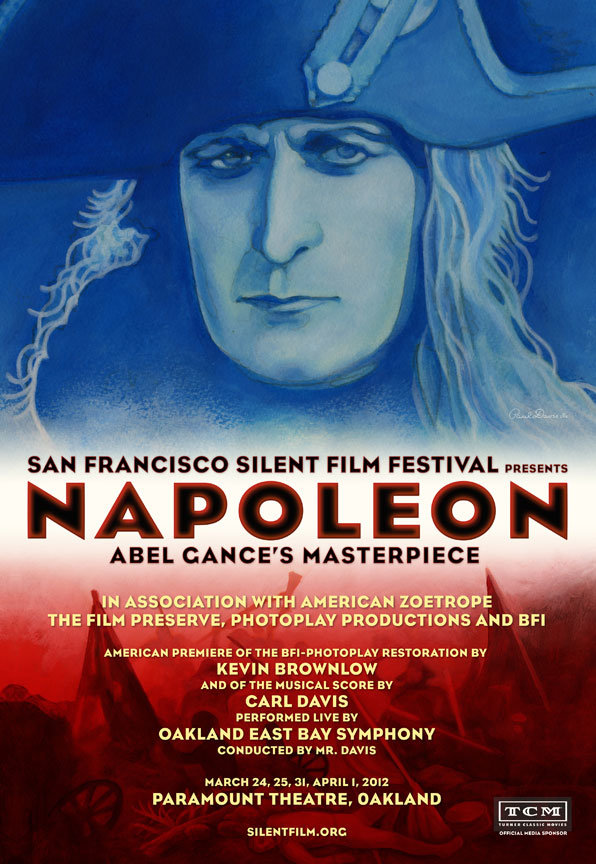 Tickets for Napoleon in San Francisco, certain to be the film event of the year, if not your lifetime, can still be purchased here. Many thanks to Kevin Brownlow, Bruce Goldstein, Dominique Besson, Sam Sarowitz and Sophie Dijan for their help with this article. The black and white MGM posters are courtesy of Photoplay Productions. The others are variously courtesy of Dominique Besson, Heritage Auctions and MoviePosterDB.

But I want to leave you with one last design. When Kevin Brownlow first discovered Napoleon for himself in 1954, at the age of 15, it was on 9.5mm film and the film had been as good as forgotten. Having fallen in love with the 90 minutes of the film that he managed to find, he started to screen it for friends and family at his home. This below was the cover of a programme drawn by Brownlow’s father for his “first proper show” of the film that would change his life.