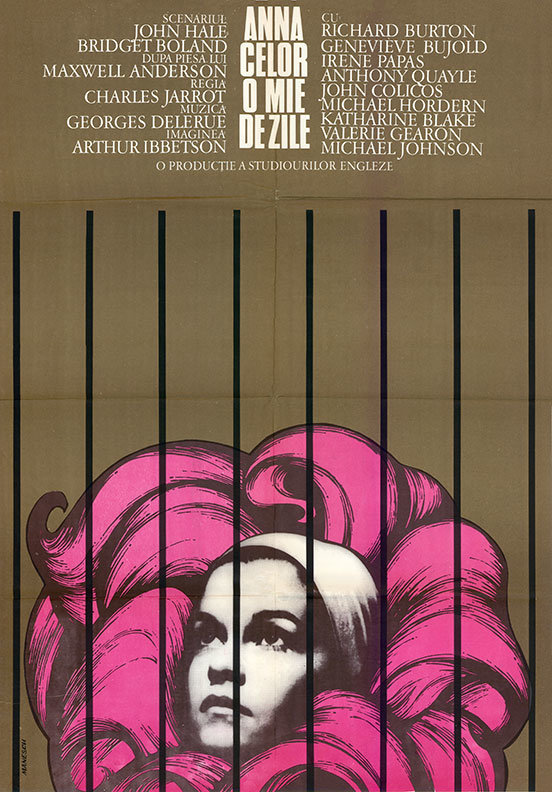 Above: A Romanian poster by “Manescu” for Anne of the Thousand Days (Charles Jarrott, USA, 1969).

When Christopher Landry emailed me the other day he apologized for not replying sooner and said he’d been “working nights up in the Carpathians on a horror movie﻿,” which is the best excuse for a tardy email I’ve ever heard (and it wasn’t even that tardy). Landry is an expat film producer and writer from Massachusetts who has been living and working in Romania since 1995. He is also the author of The Silver Screen in the Golden Age: Romanian Film Posters 1965-1989, a lavish coffee-table book of more than 300 posters from the country’s Communist era.

Romanian cinema has of course undergone a post-Ceaușescu﻿ renaissance in the past twenty years, and this weekend sees the opening of the week-long festival Making Waves: New Romanian Cinema at the Film Society of Lincoln Center in New York. (A similar festival just ended in London.) Lincoln Center is showing two of my favorite films of the year in Cristian Mungiu’s Beyond the Hills and Radu Jude’s Everybody in Our Family, and I’d love to see the 1972 classic Stone Wedding, which according to one of the writers in Landry’s book is a favorite of the Quay Brothers.

Romanian posters are a fascinating mixed bag. Not as consistently brilliant as the work of Czech and Polish designers in the same period, Romanian posters can be cruder in execution, with a rather slapdash approach to typography. A perfect example is perhaps the most famous Romanian poster of all (you can even buy reproductions at Sears) which is the Planet of the Apes one-sheet below. The type on that poster looks as if it’s been put on with Letraset, but that only adds to its wacky Pop Art appeal. I would assume that it was entirely deliberate if I hadn’t seen similar examples of mix-and-match type across a wide spectrum of Romanian poster art. 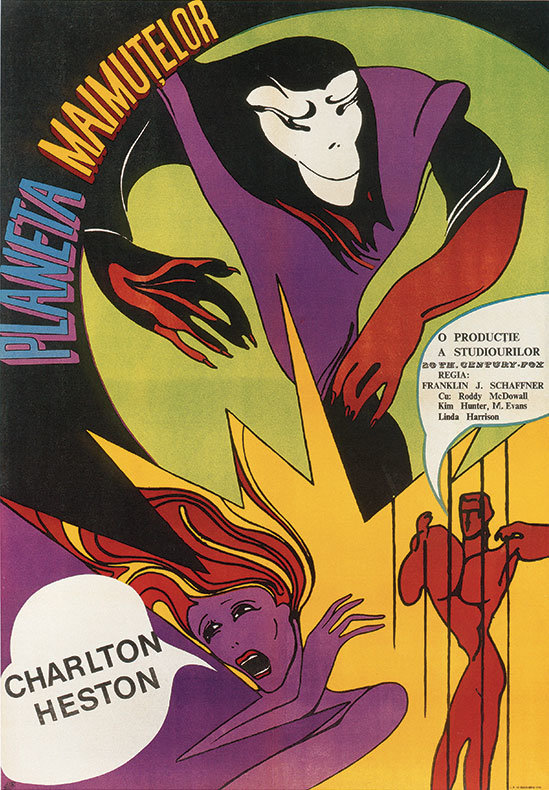 Above: Romanian poster for Planet of the Apes (Franklin J. Schaffner, USA, 1968).

The book is broken up into chapters by movie genre (comedy, epic, children's film, outlaw film...) and interspersed throughout are short essays by Romanian filmmakers (like Sergiu Nicolaescu—whose Ringul can be seen below) that give a glimpse into the hardships and challenges of working for an oppressive, state-run apparatus; profiles of poster artists like Ion Stendl and Klára Tamá﻿s (both of whose work can be seen here); and comparisons of international posters for a particular film. There is also a short addendum on the Romanian New Wave.

At their best, Romanian posters are stunning and I have selected a handful of my favorites from the book, all of which tend towards the more abstract and modernist, like that marvelous Anne of the Thousand Days above which is let down only by the serif typography (which yet barely detracts from Geneviève Bujold’s billowing magenta ruffle, or whatever that is). The following are in chronological order from the 60s through the 80s. 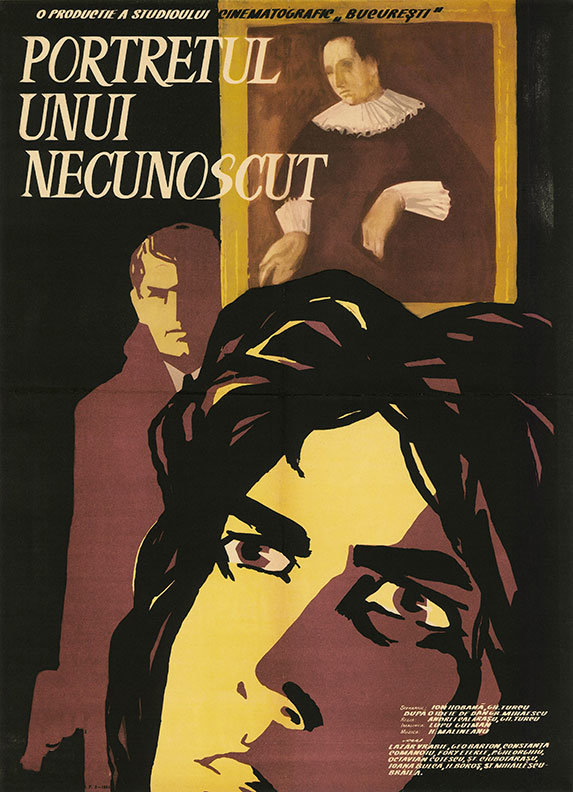 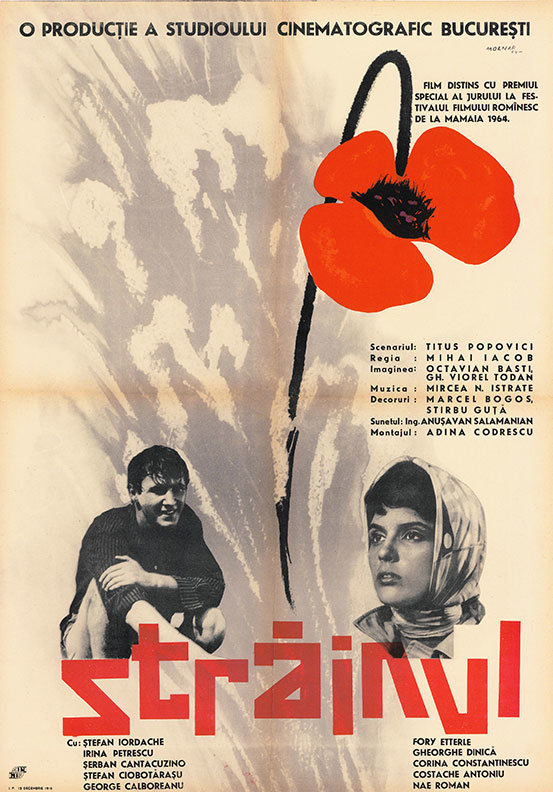 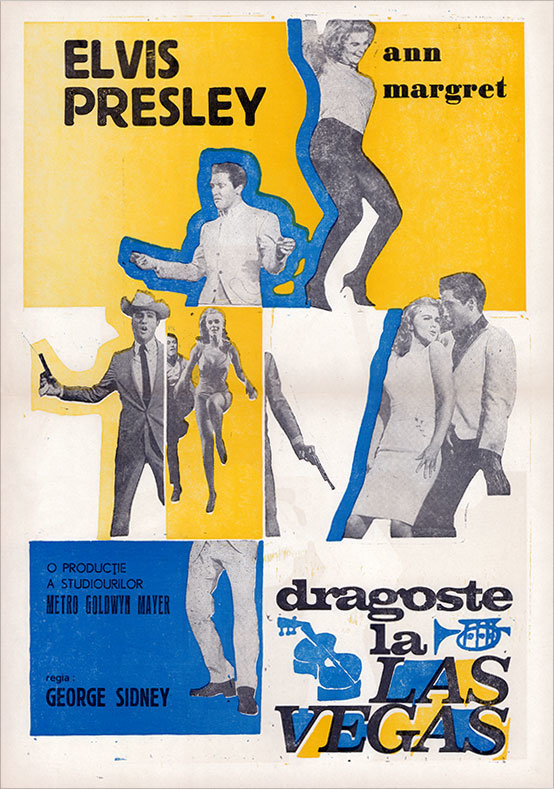 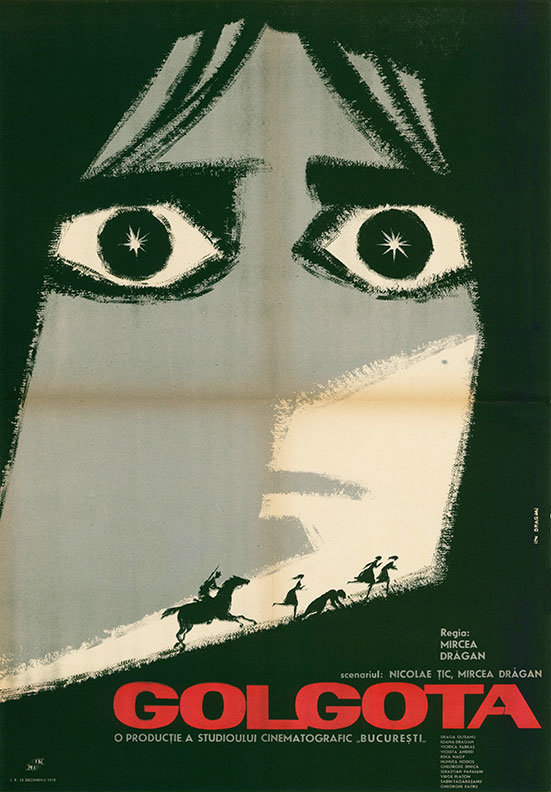 Above: Poster by Ion Dragon for Golgota (Mircea Dragan, Romania, 1966).﻿ 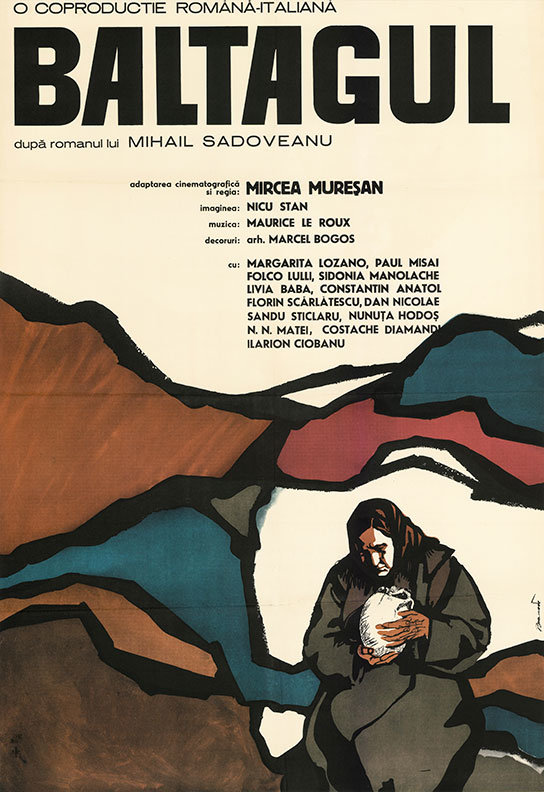 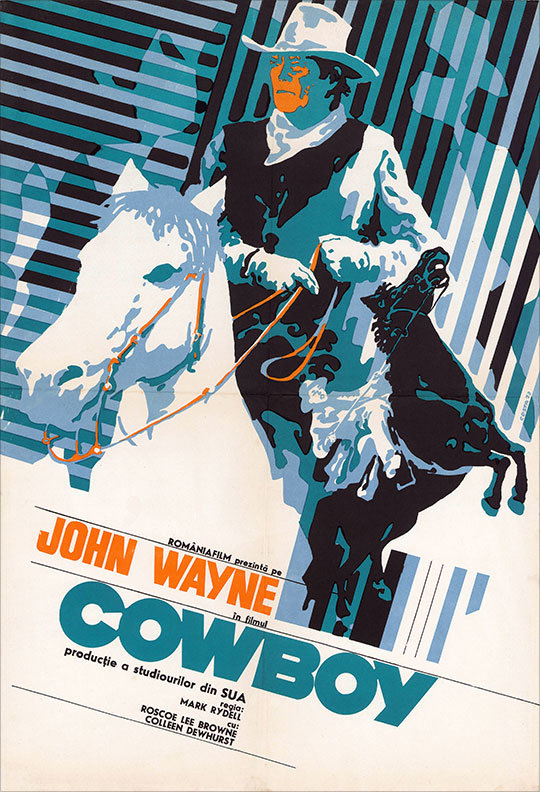 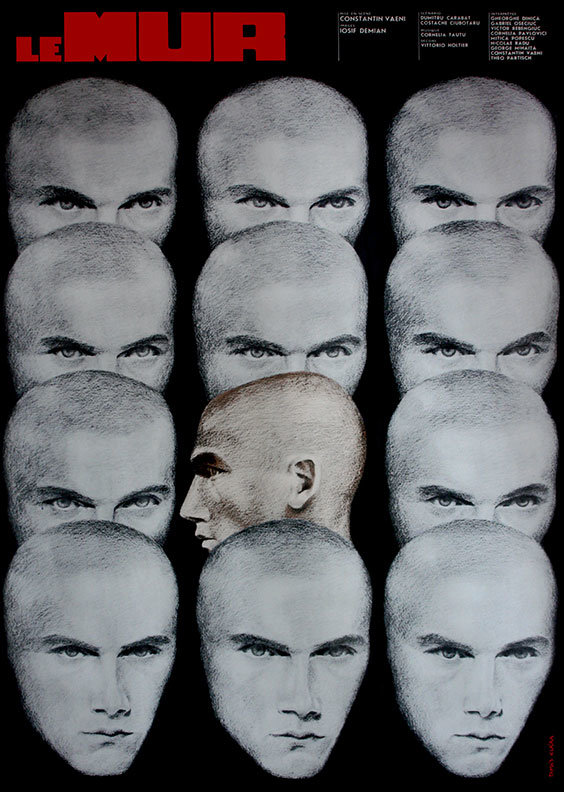 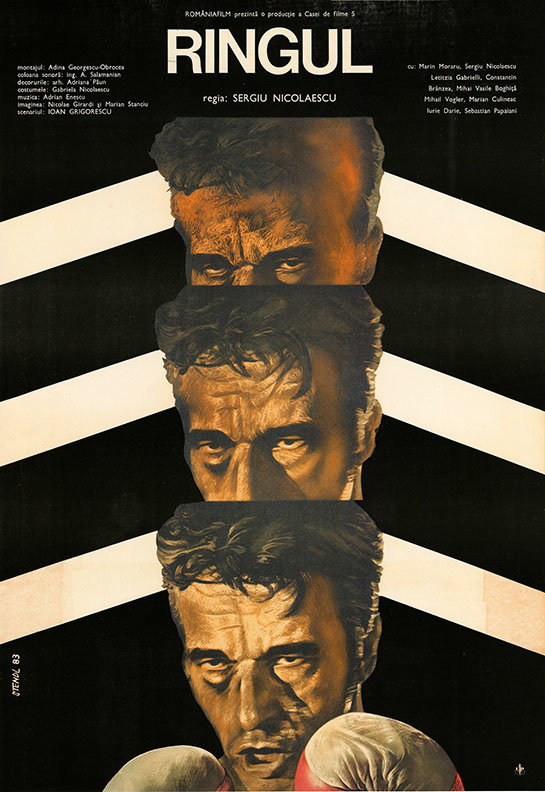 Above: Poster by Ion Stendl for The Ring (Sergiu Nicolaescu, Romania, 1983). 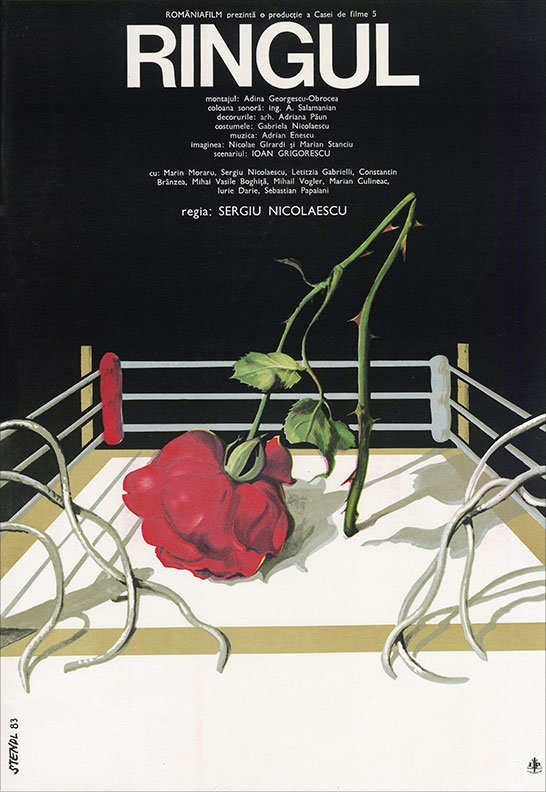 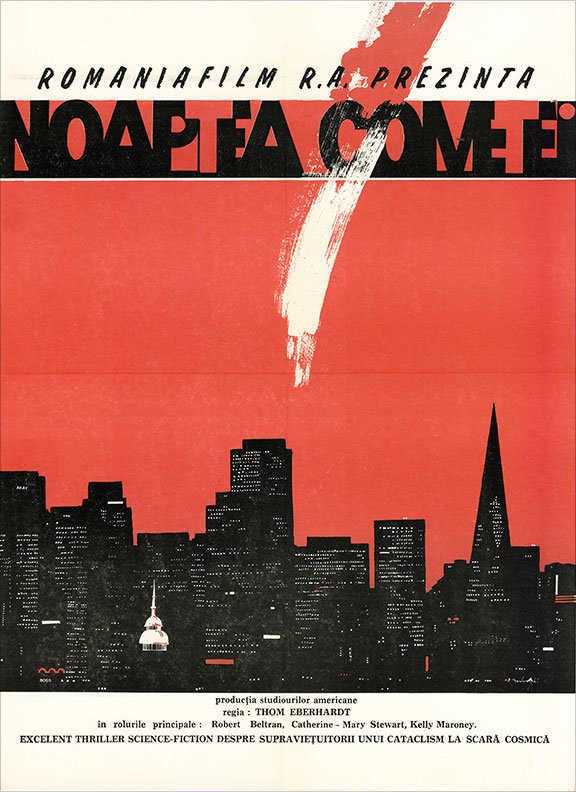 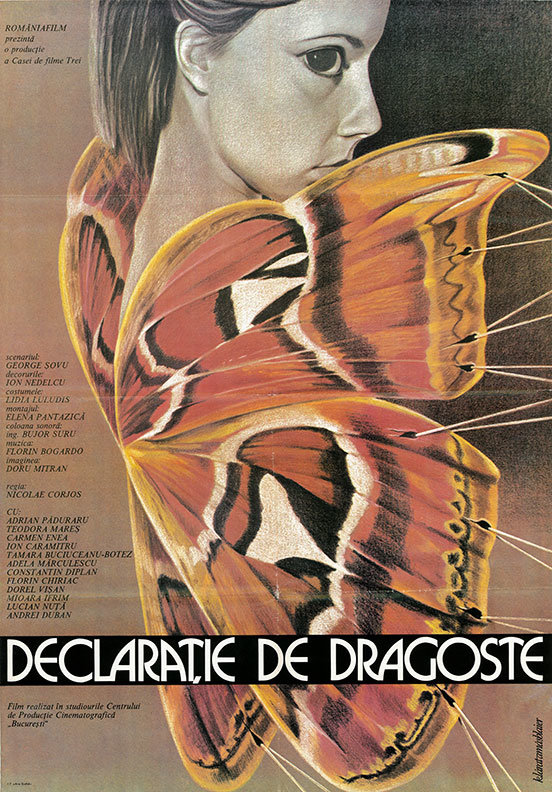 Above: Poster by Klára Tamás for Confessions of Love (Nicolae Corjos, Romania, 1985)﻿.

All posters courtesy of Christopher Landry, for whose help many thanks. The posters in the book come from his personal collection or from Ioan Baicu, “the world’s premiere collector of Romanian film posters” who has a rather unwieldy but treasure-filled website where many of these can be purchased.