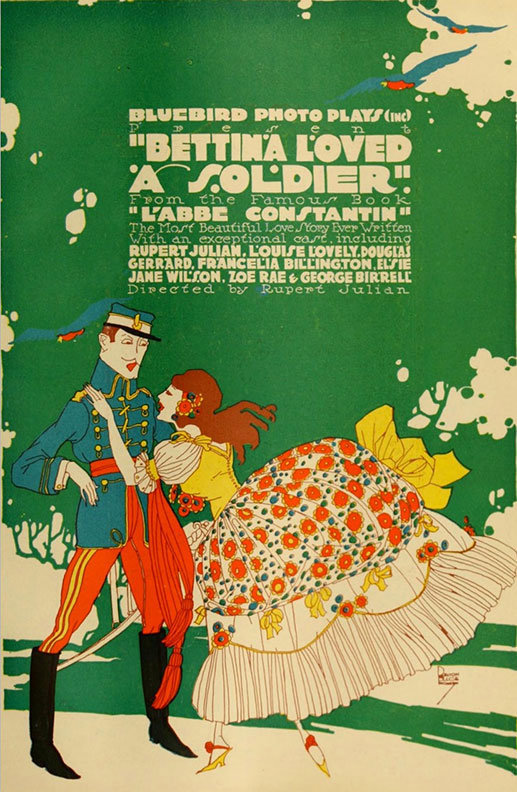 Earlier this month I discovered this Deco delight on the excellent silent film Tumblr The Loudest Voice, where it was billed as “Ad for Bettina Loved a Soldier, 1916” with no further information as to where it came from. The film has an IMDb page but on its listing on the Progressive Silent Film List the survival status of the fim is “unknown.” A synopsis of the film can be found in Clive Hirschhorn’s The Universal Story (which documents the 2,641 films produced by Universal from the silent era until 1982) and there is also a synopsis on the TCM database.

Searching for the origins of the ad, which was more than likely an insert in a trade magazine (though what a poster it would have made), I stumbled across a treasure trove of similar ads on Flickr. The ads, all for Bluebird Photoplays Inc. and all seemingly drawn by one Burton Rice, were strewn amongst the incredible archive of vintage ads collected by “Captain Geoffrey Spaulding” (named after Groucho Marx’s character in Animal Crackers), a collection which now seems to have completely disappeared, at least for the time being, as a result of, or in protest of, Flickr’s recent facelift. Luckily I had already saved a number of them.

Bluebird Photoplays, it turns out, was the “artistic division” of Universal in the late teens (all the ads seem to come from 1916 and 1917). Based in New York, at 1600 Broadway near Times Square, Bluebird seems to have been quite prolific: an announcement in a January 1917 edition of The Moving Picture Weekly  lists up to 40 new productions. 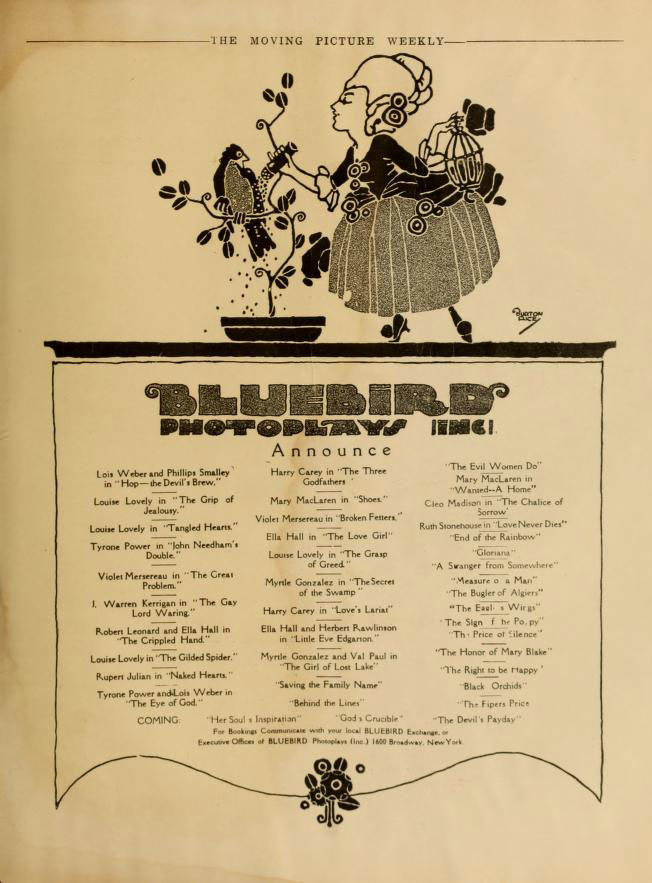 Movie magazines of the late teens, like The Moving Picture Weekly (which can now be thumbed through in the astounding Media History Digital Library’s Early Cinema Collection) are full of black and white ads﻿ for Bluebird (as well as for similar-looking small prestige companies like Red Feather Photoplays and Butterfly Pictures). An ad for Bluebird gives a sense of the company’s angle on the market.

“BLUEBIRDS HAVE ARRIVED” is the slogan adopted by successful BLUEBIRD Exhibitors everywhere. BLUEBIRDS have won a permanent place in the hearts of the fans through sheer excellence. Wonderful plays of genuine human-interest; splendid acting by brilliant casts selected for their ability to portray particular characters; lavish productions under the most capable direction have put BLUEBIRD Photoplays far ahead of any feature plays on the market. Make one day each week a “BLUEBIRD DAY” in your house and watch the profitable result. Book through your local BLUEBIRD Exchange, or BLUEBIRD Photoplays (Inc.), 1600 Broadway, New York.

The Strand, the Rialto, the Marcus Loew Theatres and many others in Greater New York now play BLUEBIRDS because of their superior excellence. The significance is that when BLUEBIRD announced its now famous policy of “The Play’s the Thing,” these astute managers said: “It can’t be done; we must have stars: never mind the play; give us stars.” The beauty and perfection of BLUEBIRDS have created a demand from the PEOPLE, which managers have been quick to recognize. The people are NOW demanding BLUEBIRDS. Are you wise? 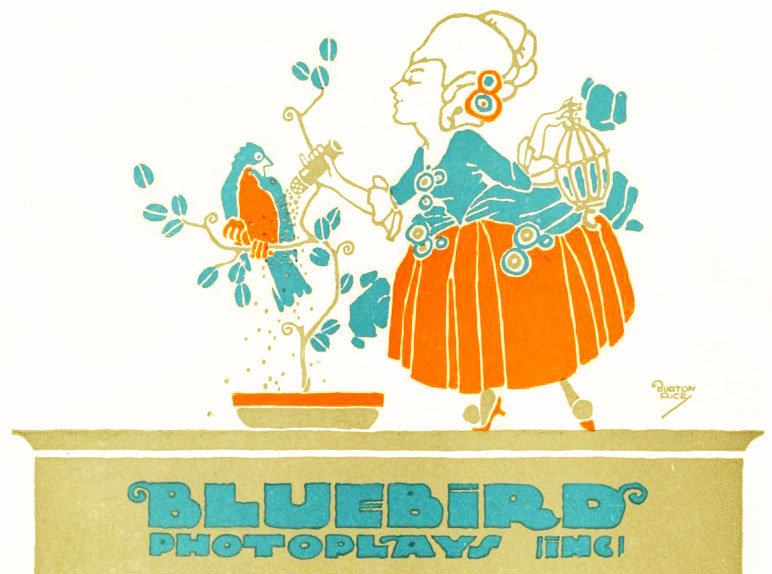 What is striking about a lot of the ads is the way that they describe the films as “plays” as if "photoplays” were somehow different, maybe more literary and sophisticated, than your average motion picture.

Meanwhile a blog post about Bluebird on the Japanese cinema site Vermillion and One Nights, provides this fascinating twist in the history of the company:

One unique influence on Japanese cinema was of Bluebird Photoplays. Bluebird Photoplays was the subsidiary of Universal Pictures, providing run-of-the-mill melodrama between 1916 and 1919. Though some familiar names, Lois Weber, Rupert Julian, Rex Ingram, Tod Browning and even John Ford can be found among the list of directors, the studio itself failed to deliver materials attractive enough for the U.S. market. Some of the Lon Chaney films are also products of Bluebird Photoplays. The titles like “Shoes (1916, Dir. Lois Weber)”, “Southern Justice (1917, Dir. Lynn Reynolds)”, “The Ruggedy Queen (1917, Dir. Theodore Marston)” probably sunk in box office in U.S., but they were among the most highly appreciated in Japan, especially by young artists in the business such as Norimasa Kaeriyama, Teinosuke Kinugasa and Minoru Murata. Keriyama, heavily influenced by Bluebird films, directed “Miyama no Otome (1919)”, a remake of “The Ruggedy Queen”, while Kinugasa studied Rupert Julian’s films thoroughly down to the minutest details. Young Yasujiro Ozu left a list of his favorite Bluebird actresses in his high-school notebook.﻿

Because only handful of the Bluebird films have survived, and even fewer are available for casual viewing, I am not in the position to give a full analysis on those films. Some contemporaries noted its “naturalness” (of acting and directing) was in stark contrast not only with Japanese cinema at the time, but also with Italian, German and, to some extent, Hollywood cinema at the time.

And in The Japanese Film: Art and Industry, J.L. Anderson writes:

As far as I can determine, non-Japanese studies of the American film ignore Bluebird Photoplays. Yet the importance of these obscure pictures to the Japanese has been continually reaffirmed even though no print or even a fragment is known to have survived. The search goes on, for the Bluebird Photoplay is the ur-film of post-1920 mainstream Japanese film...

...Bluebird Photoplays ﻿ were absorbed and transformed in Japan. Their scenic elements, their repose, their naturalistic veneer, their interplay of casual with causal incident resonated with Japanese narrative temperament. The Bluebird line survives in the oldest and most pervasive studio style in Japan: the Shochiku gendai-geki (contemporary-life film).

Whether the product itself was “run-of-the-mill melodrama” or one of the building blocks of Japanese cinema, Bluebird’s advertising was another matter entirely. I have not managed to find out anything about the artist Burton Rice, nor any other work by him beside a 1918 war poster for the Knights of Columbus, but his color ads for Bluebird are just stunning in their draughtsmanship, their use of vibrant color and negative space, and especially in their superbly lettered blocks of text. From the sound of it, Rice’s advertisements promised something far more colorful and exotic than the filmed chamber dramas that they were promoting. 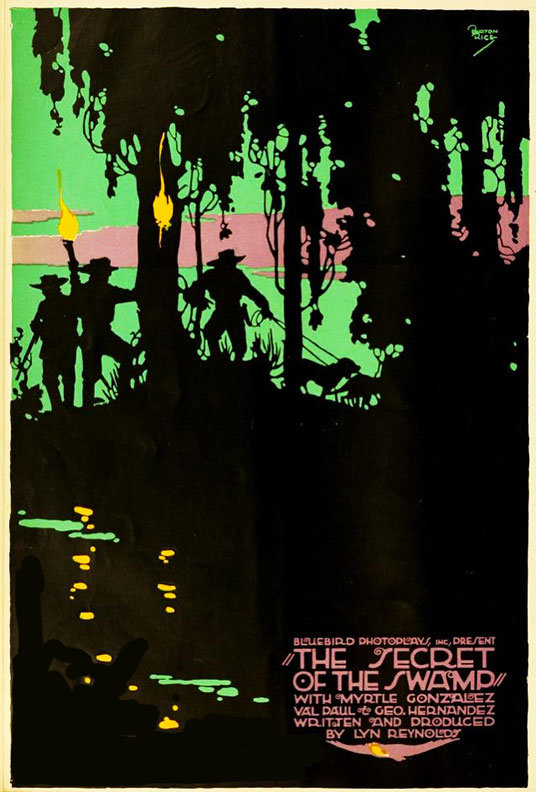 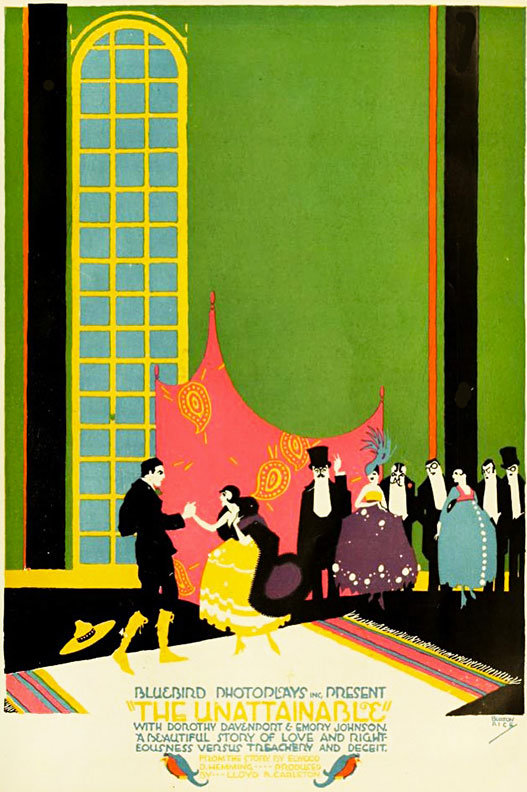 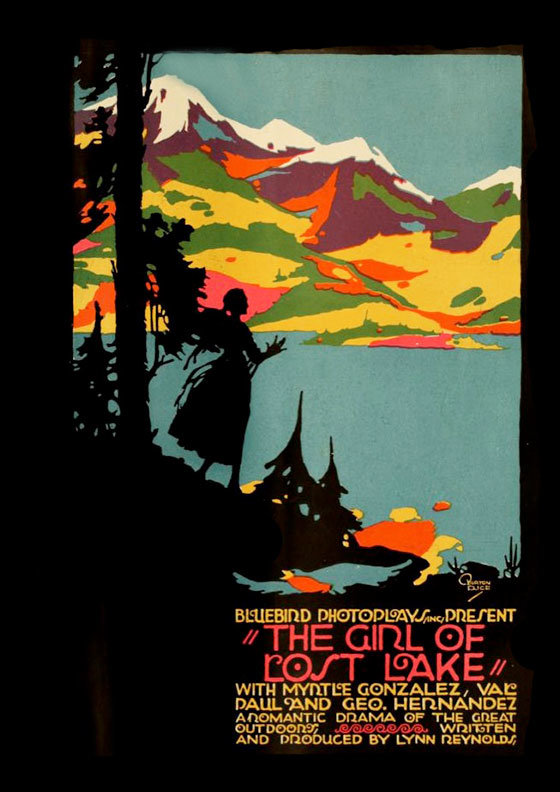 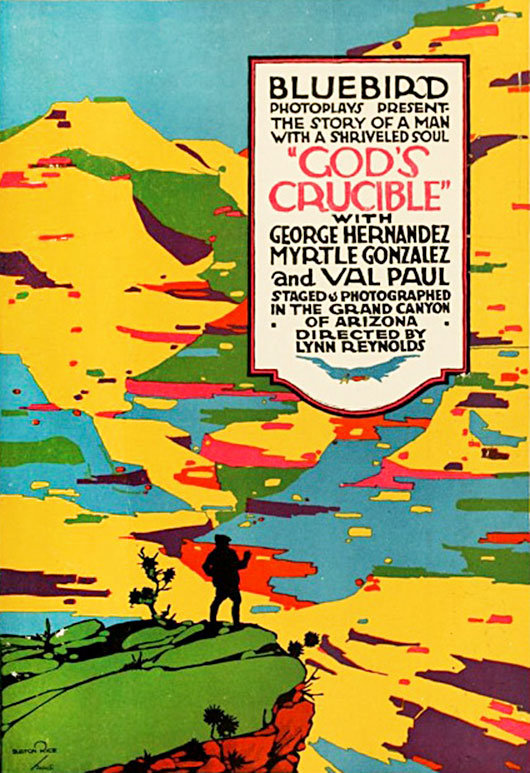 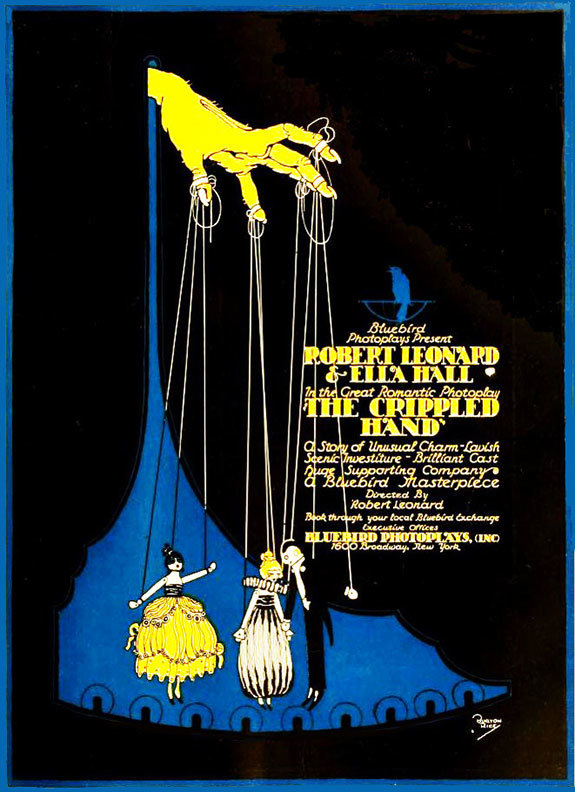 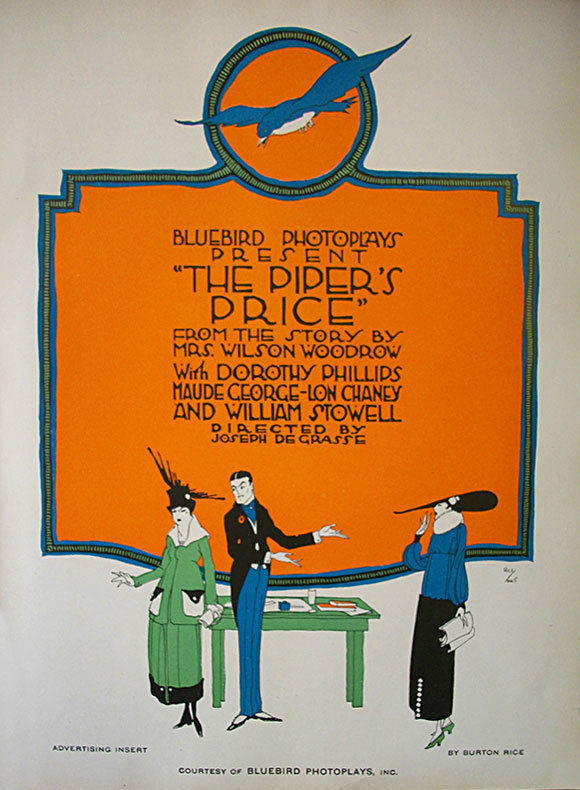 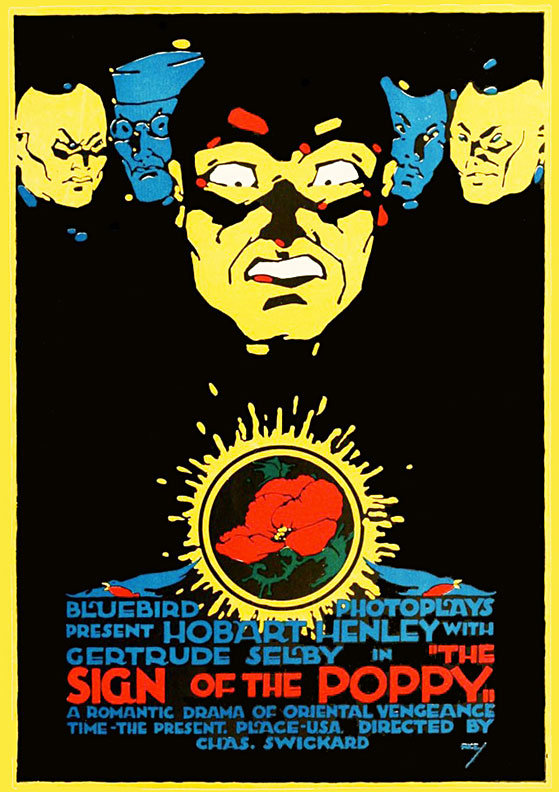 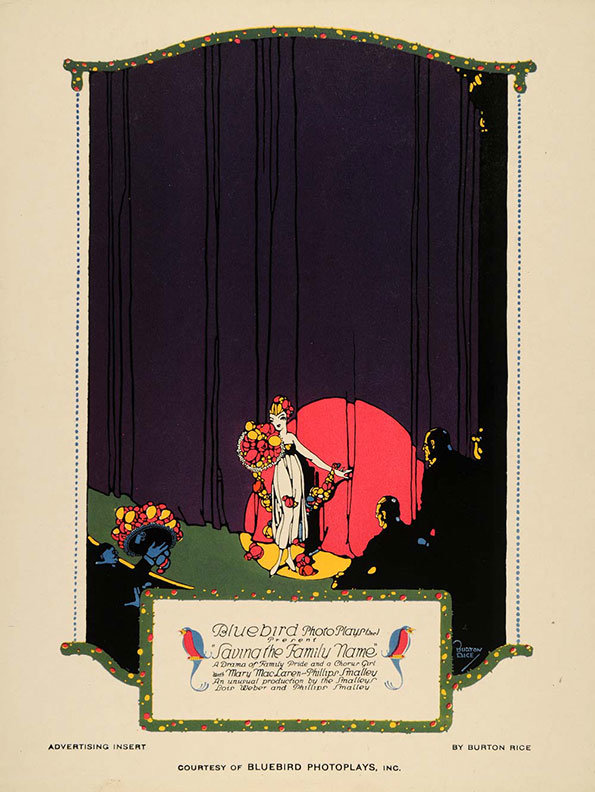 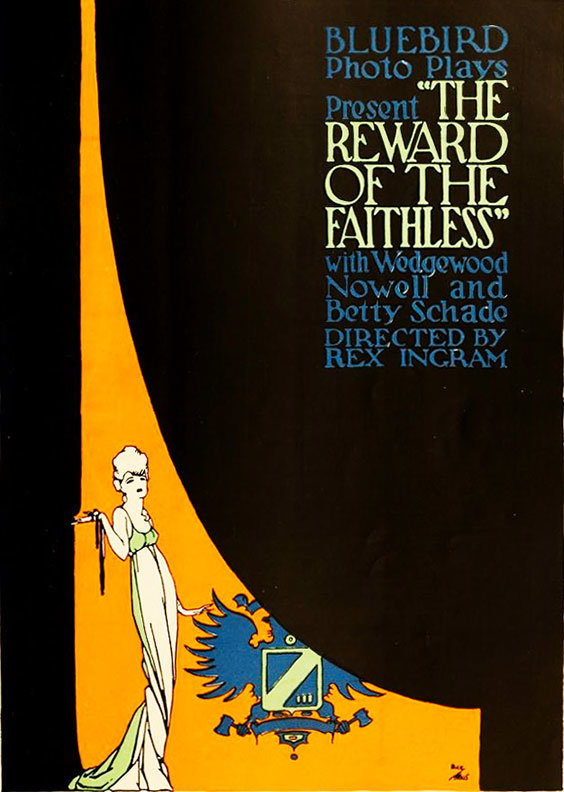 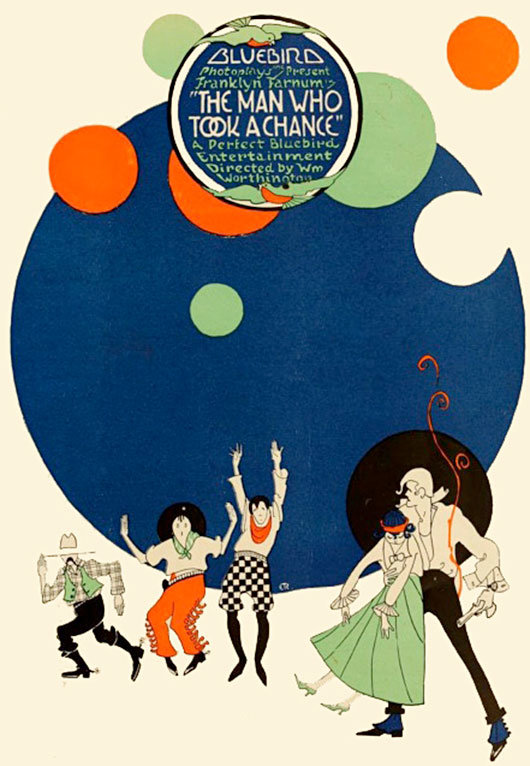 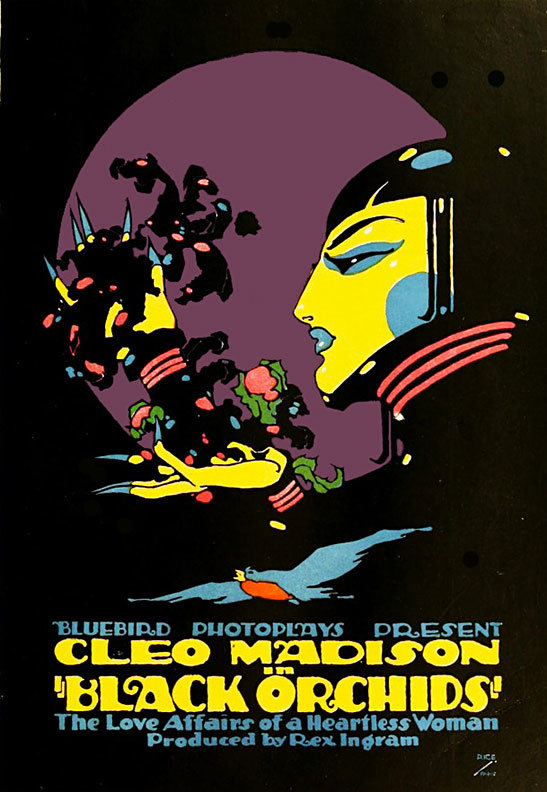 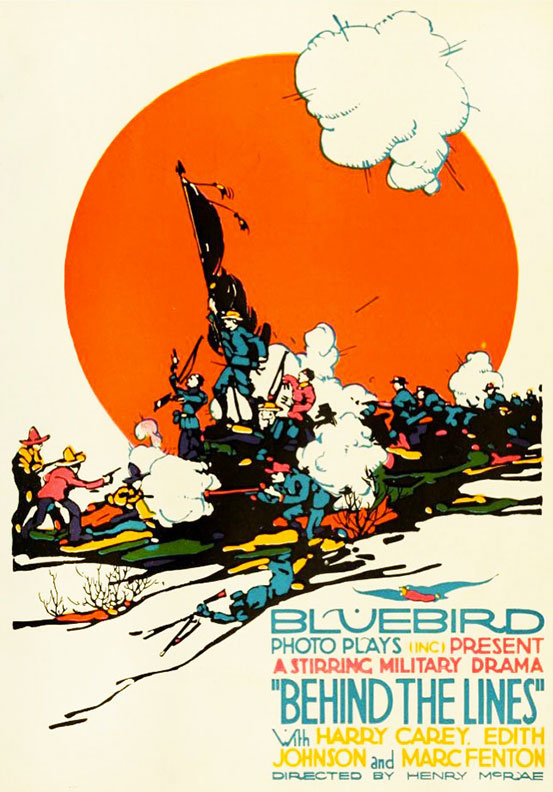 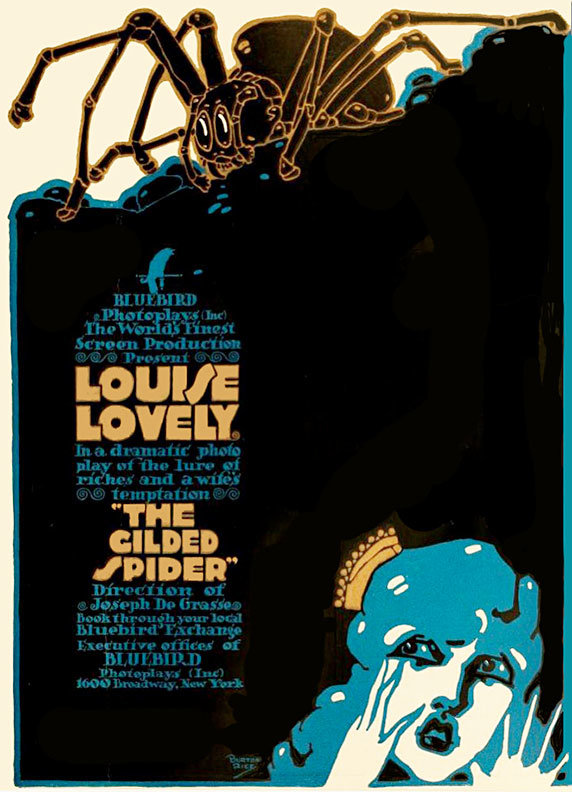 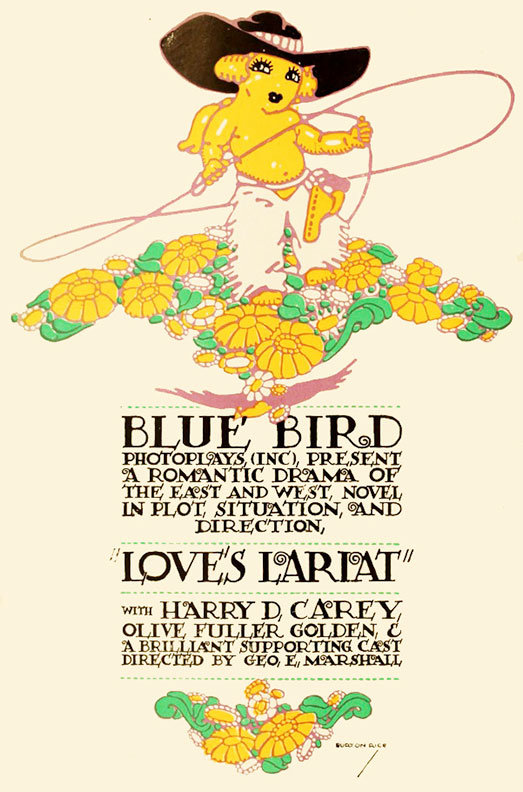 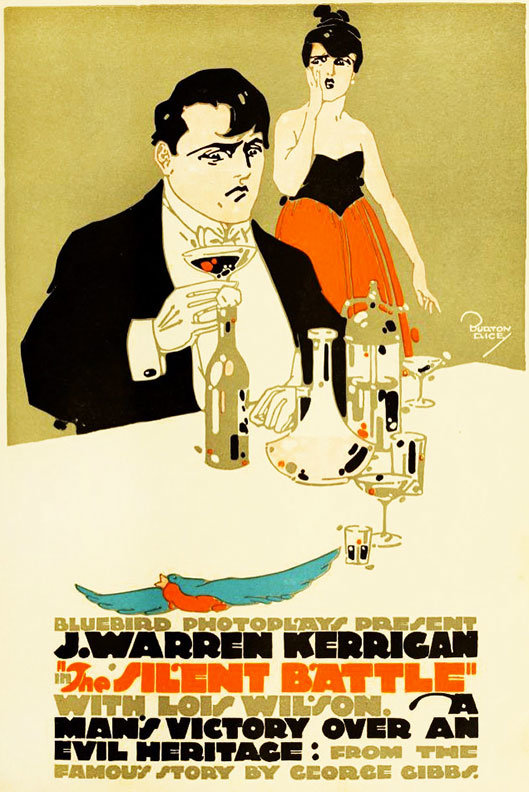 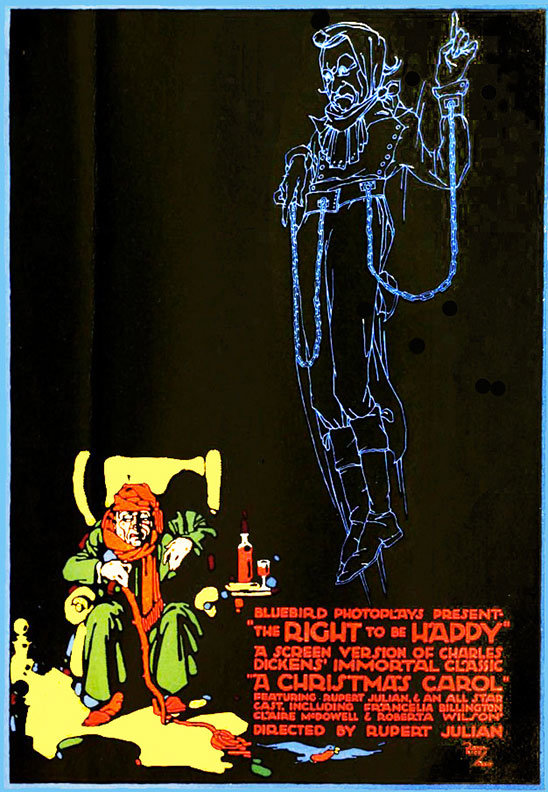 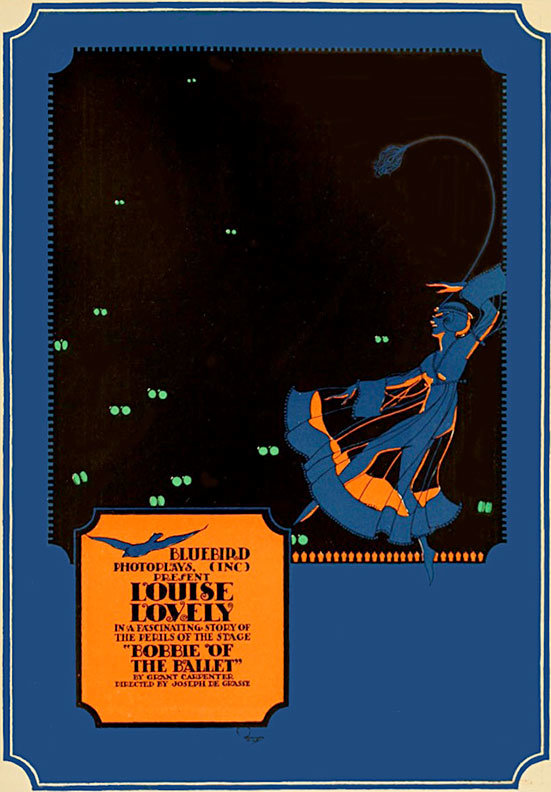 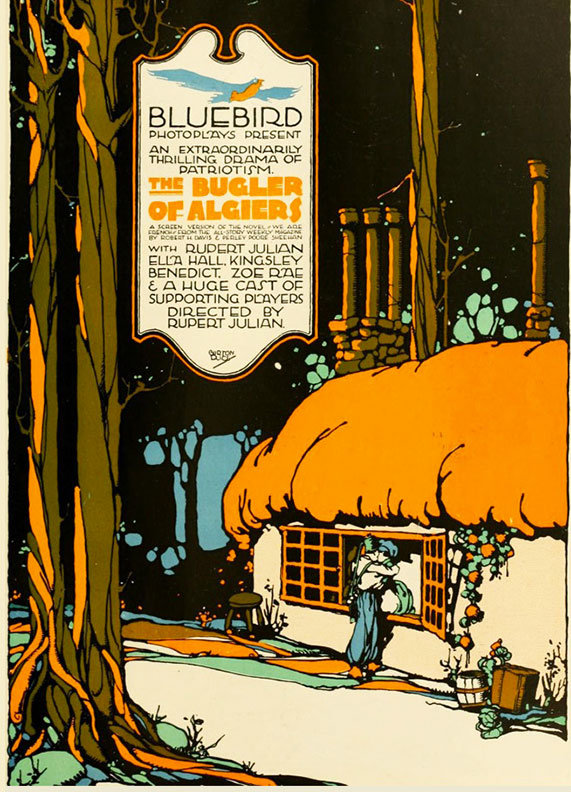 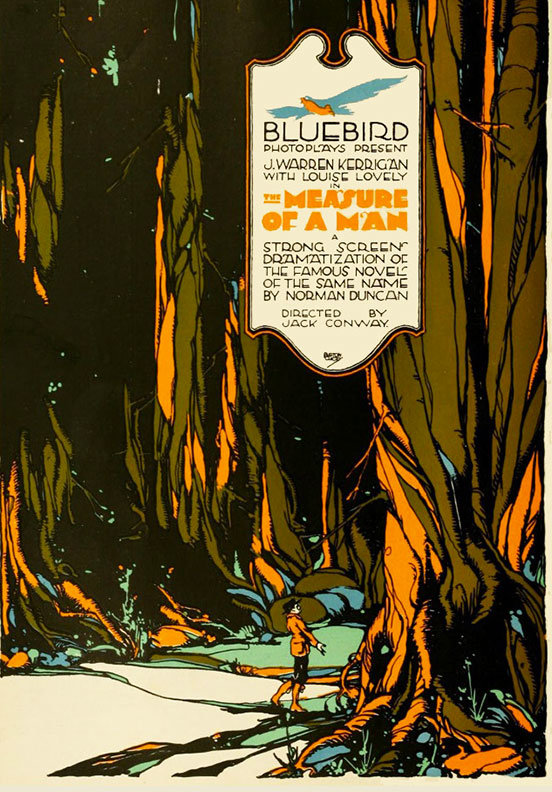 I found one of Rice’s ads for sale on eBay and the listing said that the ad, for The Piper’s Price, came from Modern Art Collector Magazine, “a quality periodical which was begun in 1915 to promote modern decorative art, especially advertising.﻿”﻿

Many thanks to Captain Geoffrey Spaulding, whoever you are, for collecting these. I hope your Flickr collection returns soon. If anyone knows anything more about Bluebird Photoplays, or Burton Rice, or the provenance of these ads, please let me know in the comments below.