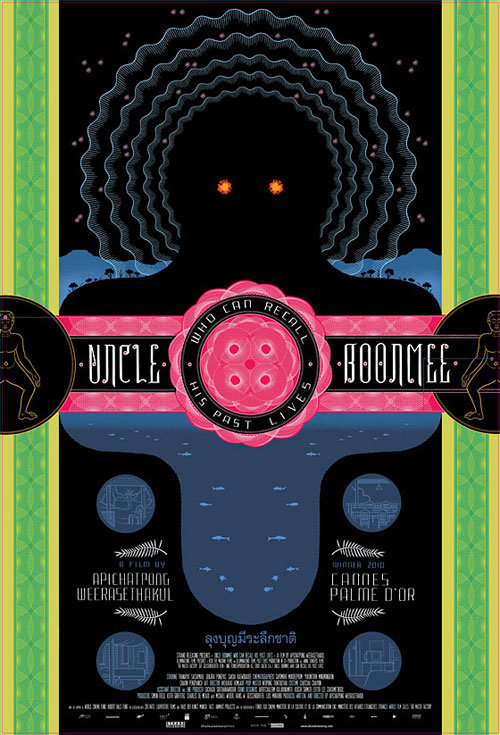 A couple of months ago I featured all the international posters for Apichatpong Weerasethakul’s Palme d’Or routing Uncle Boonmee Who Can Recall His Past Lives, but this new poster, designed by the great Chris Ware for Strand’s US theatrical release, is far and away the best of them all, and definitely an early contender for the best of 2011. I’ve been a fan of Ware’s for many years and his one-sheet for The Savages was one of my favorite posters of the 00s. This one is even better.

When I heard on the design grapevine that Ware was working on the poster I was thrilled and also curious as to how his sensibility would mesh with that of this most enigmatic and lovely of films. Despite the fact that the lengthy title of the film has a certain graphic novel quality similar to that of Ware’s most famous work, Jimmy Corrigan, the Smartest Kid on Earth, it didn’t seem an obvious fit. Ware is a very precise and deliberate artist, known for his grids and geometry and hard edges, while Uncle Boonmee is a film of great softness and fluidity, with few straight lines beyond the uprights of Apichatpong’s trademark stilt houses. Ware also strikes me as a particularly urban artist (his drawings of buildings are exquisite) while Boonmee plays out in fields and jungles, waterfalls and caves. I also wondered if Ware would be tempted to render Boonmee’s story and its many transfigurations as a series of comic panels, but he did no such thing. Instead he has encapsulated the mysteries of this most unusual film into a dazzling cartoon mandala whose symmetries and symbolism radiate from its pink heart.

I can’t wait to see a larger version of the poster because so much of Ware’s brilliance is in the details, but, as with almost all the other designs, the main focus of the poster are the shining eyes and the black silhouette of the film’s most striking invention, the monkey ghost, which Ware has stylized to the point of abstraction. The mirrored bottom half of the poster conjures up both the pool in which a princess is seduced by a catfish and, as negative space, the cave in which the second half of the film plays out. Though it’s hard to see at this size, the four circles at the bottom seem to contain line drawings of Boonmee’s various interiors and might be the most characteristically Ware-ian aspect of the whole design. And his lettering is impeccable, as always: ornate and yet restrained, and suitably Thai inflected. I especially love how he has managed to mirror the director’s credit and the Cannes prize, two things that I don't think I’ve ever seen given equal treatment. The poster works, even as it puzzles, because it tells you that this film is something special, something somehow trandscendent and unique, something to pay attention to. The result is as colorful and readable as his graphic novels, and yet as spooky and witty as his brilliant Halloween New Yorker cover. You can read Ware’s brief thoughts about creating the poster on Vulture.

As far as I know, Uncle Boonmee and The Savages are Ware’s only movie posters (though over ten years ago he created an unused design for the Henry Darger doc In the Realms of the Unreal), but in 2008 he also did this beautiful brochure cover, below, for an Ozu retrospective at L.A.’s Cinefamily. And, while we’re talking about his film-related work, I love this animation he created for This American Life. 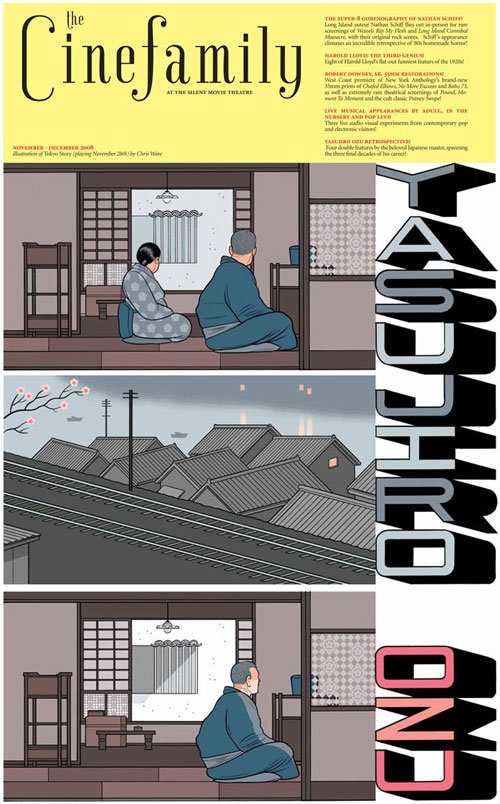