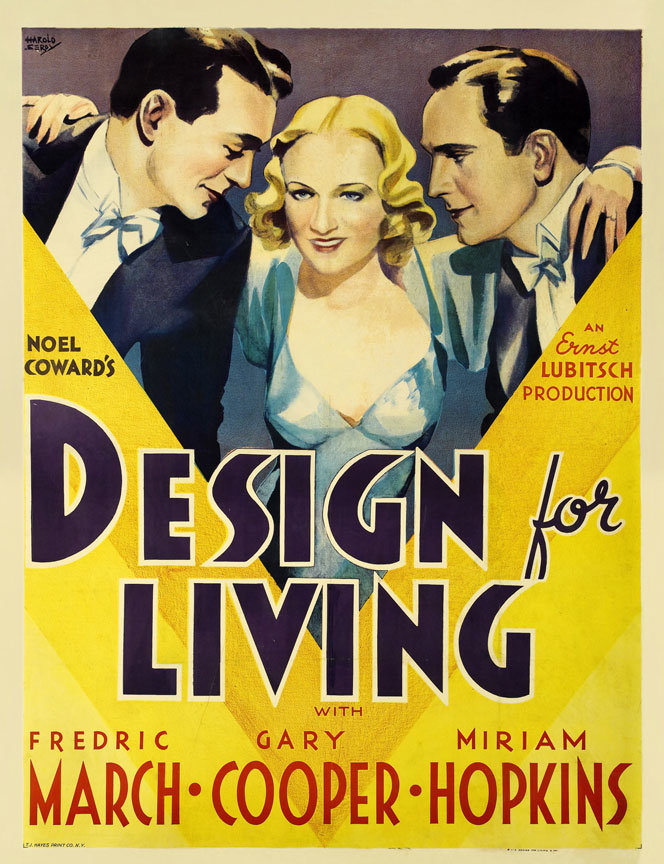 The release this week of the Criterion Collection’s DVD and Blu-ray of Ernst Lubitsch’s Design for Living (1933) sent me off in search of posters for the film, which led me on a virtual paper-chase that ended up with my scouring Palm Springs newspapers for articles about a nonagenarian retiree.

The one design for the film that really caught my eye was this bold, brightly colored, but somewhat crudely illustrated (it doesn’t really do Miriam Hopkins justice) poster. Tracing it back to Heritage Auctions, which sold the poster in 2008, I discovered that it was one of a batch of rare two sheets that had been saved by the original artist and passed down to his family. Two sheets, which measure 41" x 54" (the size of two regular posters) were printed in New York and designed specifically to be used for outdoor advertising in the city as well as on the subway. Because they were printed in limited quantities it was rare for any of them to survive. But the artist who painted these, Harold Seroy, had saved at least eight of them, all painted in 1933 and 1934. According to Heritage, each one was probably the sole surviving example. The other seven are below. 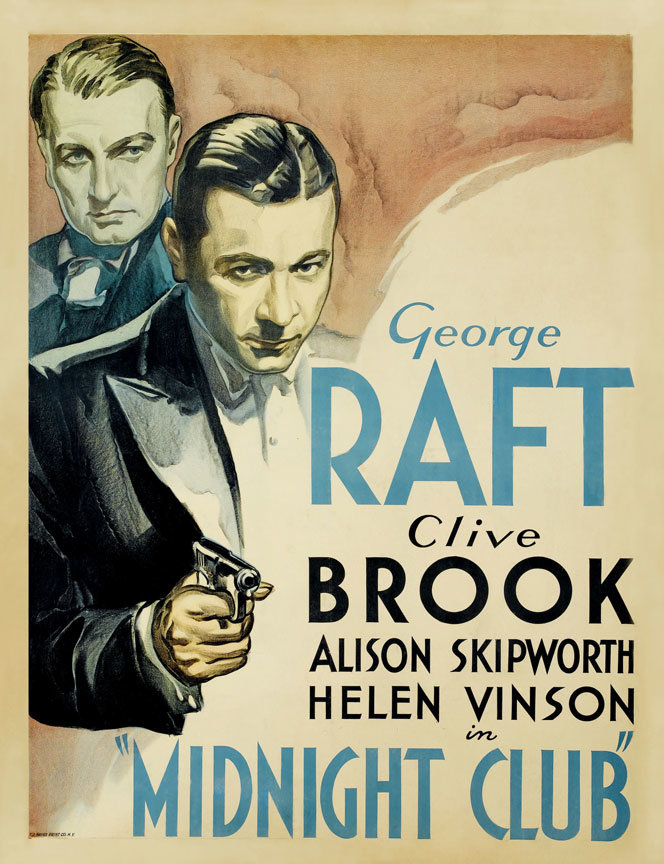 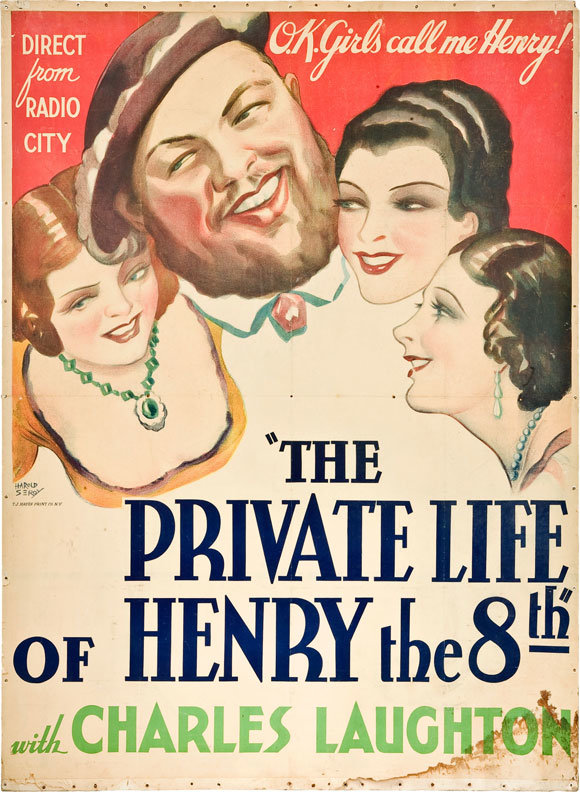 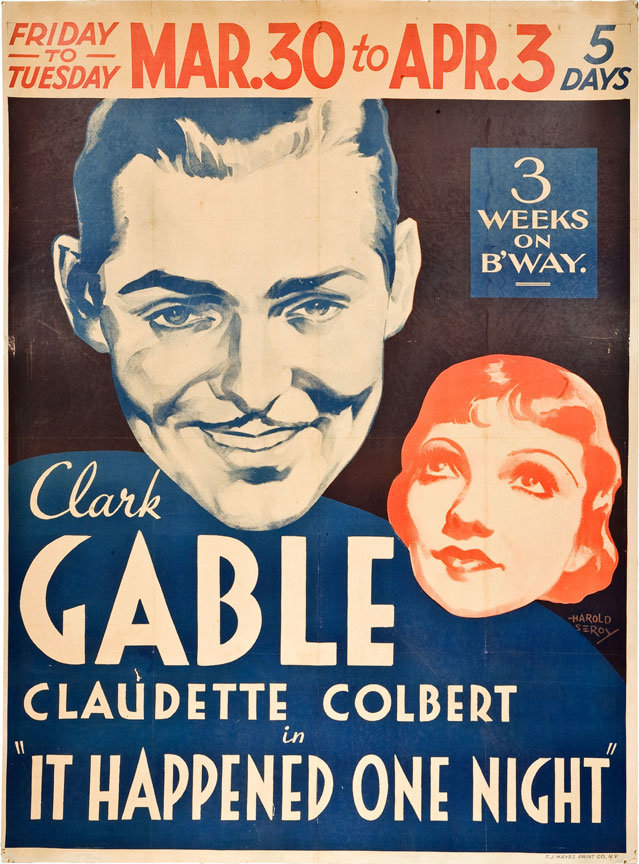 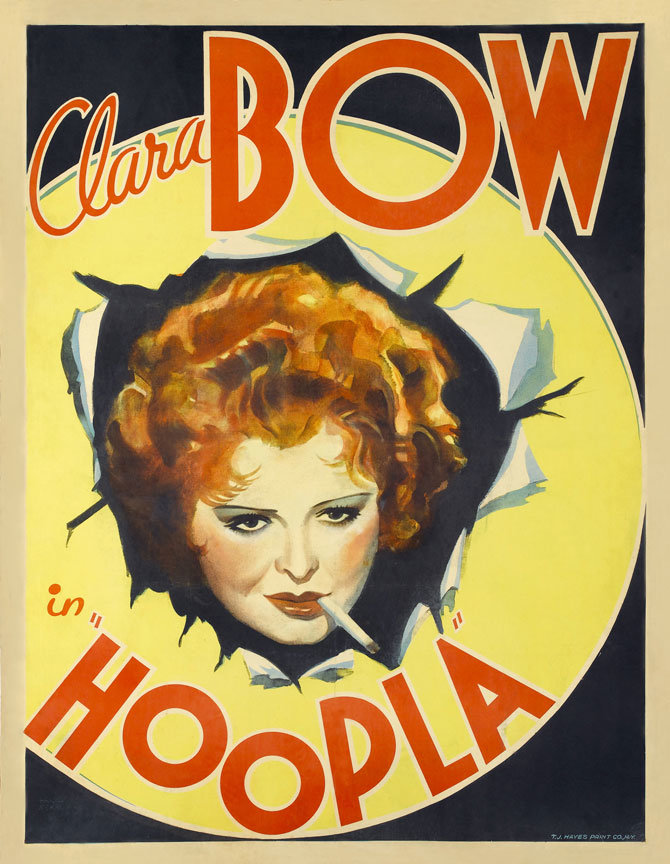 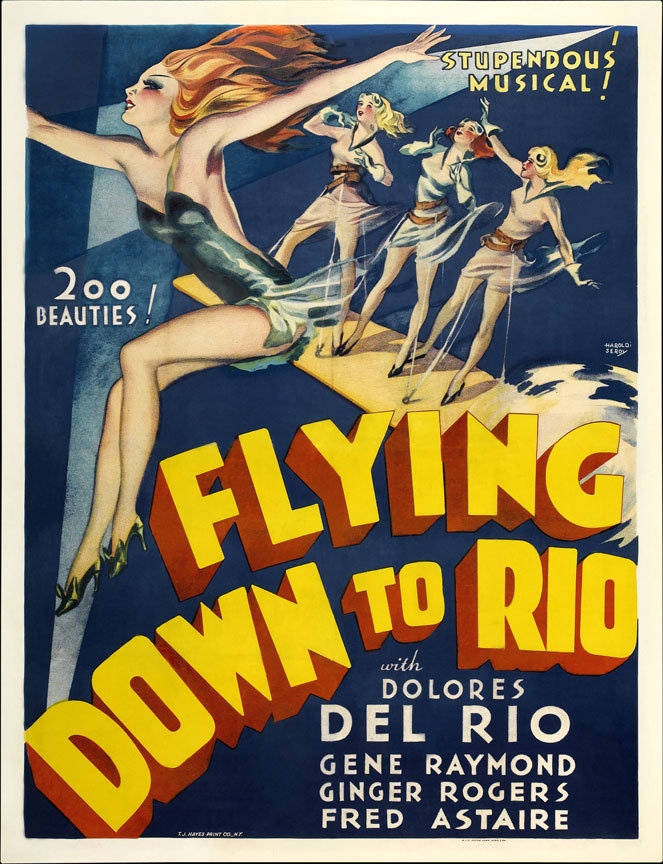 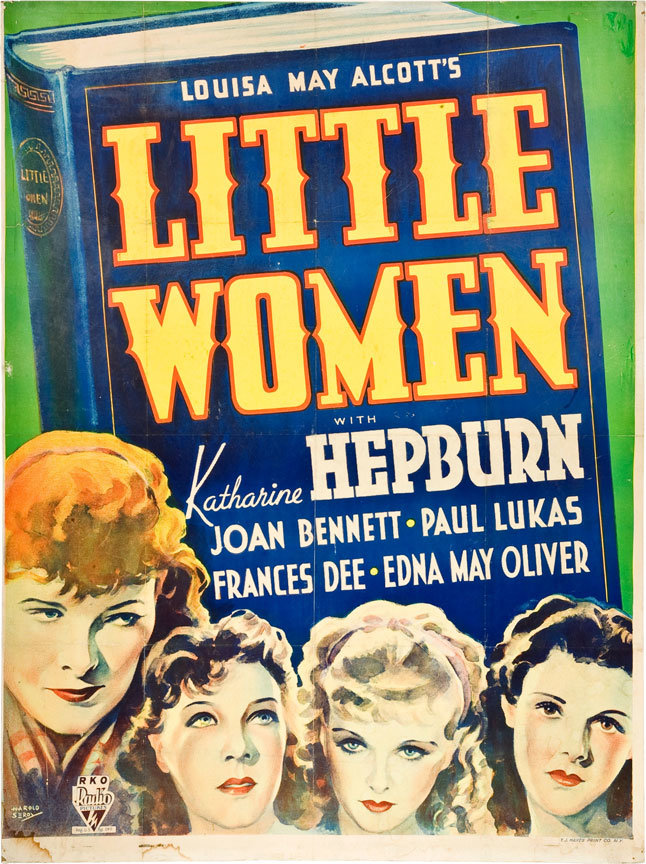 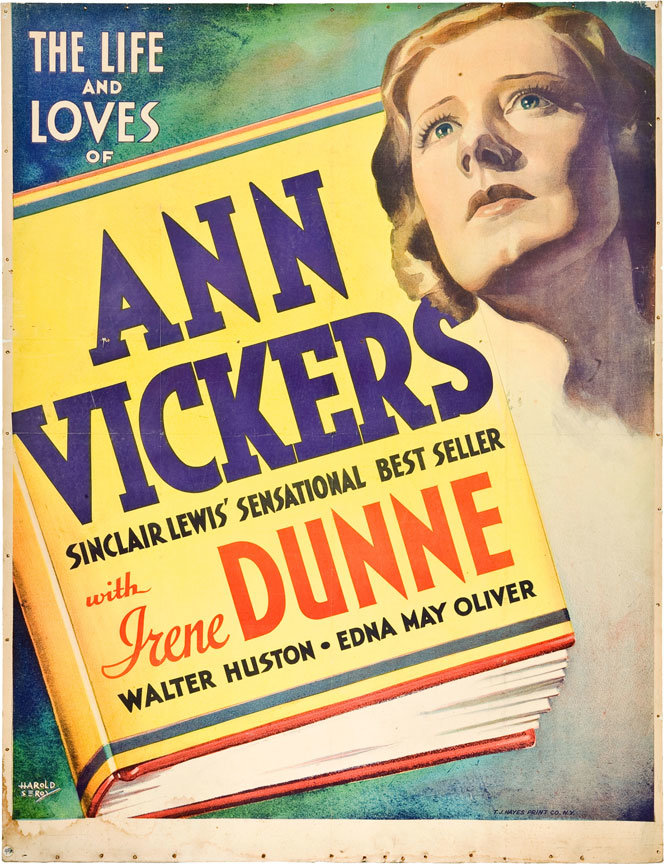 All eight posters are clearly signed by Seroy. When I Googled him I discovered three articles from local Florida newspapers in the 1980s and 90s. The first, from the Palm Beach Post, which is reproduced below, was from 1982 when Seroy was 81 years old and about to teach an art class in Boynton Beach. The article begins, notably, with the line: “If you saw Design for Living in 1934, it might have been because of Seroy.” In the article he reminisced about his Hollywood career (all of which he seems to have spent in New York). Born in Russia in 1901, Seroy immigrated to the US in 1918, graduated from the National Academy of Art and Design in New York and dreamed of being a fine artist until an early marriage and a child changed his plans. He got a job with Warner Brothers in New York in 1930 and six months later was the art director at RKO, where he worked for 11 years. He was a movie poster artist for 30 years and is credited in the articles with posters for Gilda and The Barefoot Contessa, though I haven’t been able to find any other posters with his signature.

According to the Post, “shapely, full-figured women were Seroy’s favorite subject. ‘In the industry, I was known as a T-man, which stands for a female bosom,’ Seroy said, proudly. ‘Some people were known for some types of illustrations. I was a T-man. So whenever they wanted a good picture of Mae West or Ava Gardner or Betty Grable, who would do a good bosomy job, they called me.’” 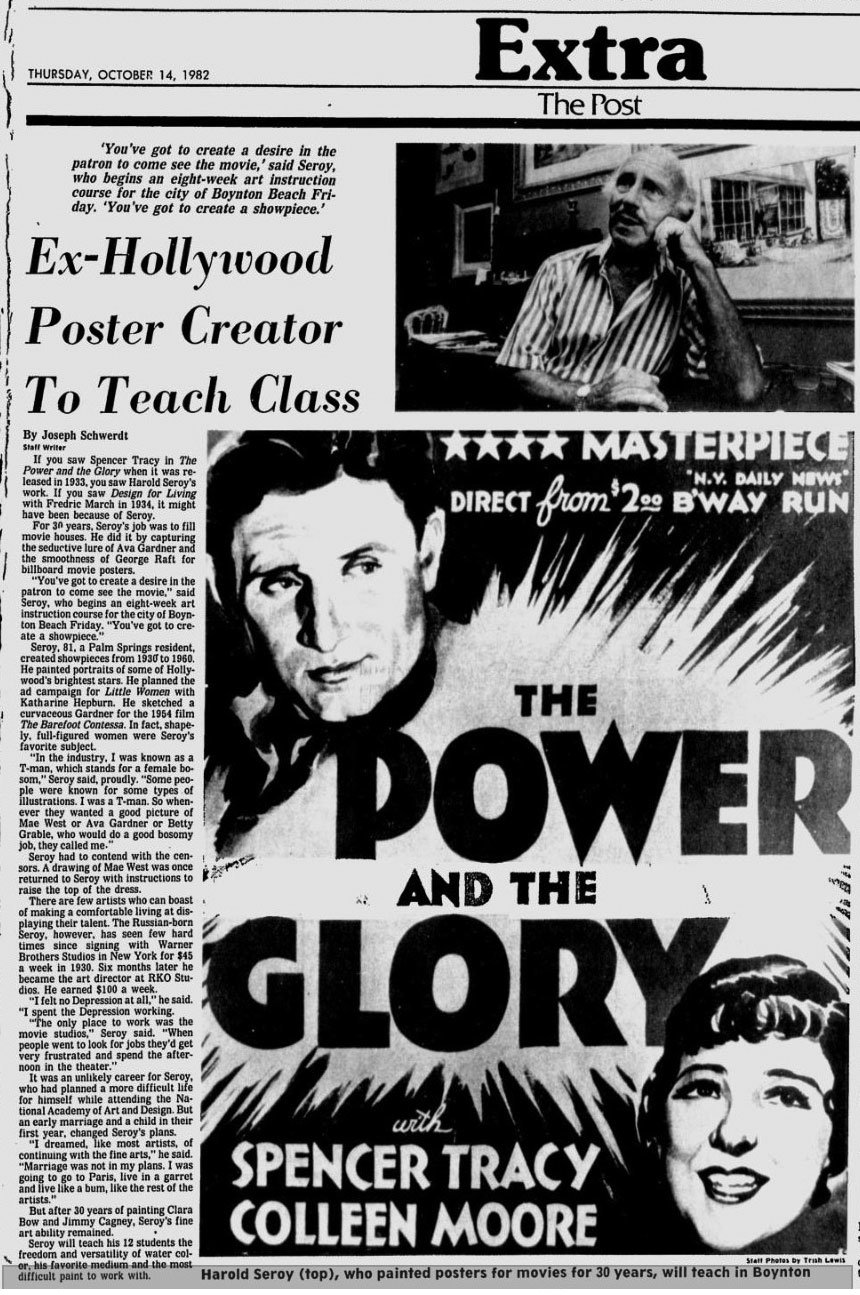 The last article I found about Seroy was a sadder one, from the Fort Lauderdale Sun Sentinel in 1993, nine years later. Seroy was by then 92 and troubled with arthritis. His wife of 67 years, Ethel, had passed away the year before but, before she died, had asked him to paint a portrait of presidential candidate Bill Clinton and his wife Hillary. He had spent seven months honoring her wish, despite his inability to hold a brush for long periods. “My Ethel is not here to see this painting, but I hope she knows that my love for her is painted in it,” Seroy wrote in a letter that he sent to the Clintons with the portrait. “My wife and I saw a little of ourselves in you, Mr. President, and you, Mrs. First Lady. We were good looking, too.”﻿ 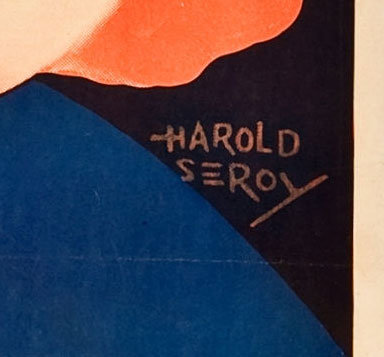 According to a notice in the New York Times, Harold Seroy died at his home in Lake Worth Florida on June 14, 1999, at the age of ninety-seven. 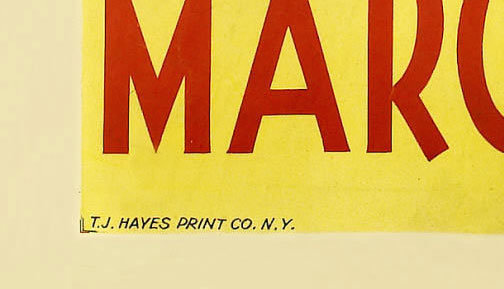 Postscript: all of the two sheets Seroy had saved were printed in New York by T.J. Hayes Printing Company. Thanks to the website 14to42 (“a survey of all the signs in New York from 14th to 42nd St”) I discovered that the company, which was founded in 1907, was located at 154 West 18th Street from 1913 to 1944. They were known as T.J. Hayes Printing Co. until around 1936 and then became the Hayes Printing Co. until going out of business around 1960 (coincidentally the same year that Harold Seroy quit poster designing). The Municipal Archives photograph below on the left dates from the late 30s. The company was located in the Hellmuth Building which was built in 1906 by the Hellmuth Company, manufacturers of printing ink (“Inks for every system of printing”). You can see signs for both Hayes and Hellmuth on the side of the building. The Hellmuth building still exists, with its name above the entrance. You can just see it on the Google Earth image on the right, three buildings in from 7th Avenue. 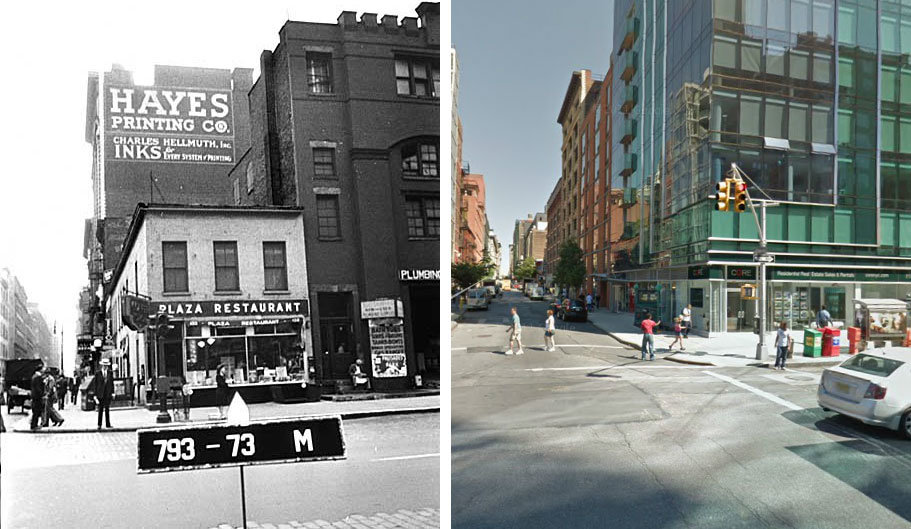 Postscript 2: Seroy’s Flying Down to Rio two sheet sold for $26,290 in 2008, the most expensive of the eight posters. But a one sheet (half the size)﻿ for the same film sold the same year for almost ten times that amount, $239,000, making it one of the ten most expensive posters ever sold. The one sheet, seen on the right below, despite its similarity to the two sheet, was not signed by Seroy and thus probably not painted by him, begging the question of who was the original artist. ﻿Perhaps Seroy, being based in New York, worked exclusively on these specifically New York size posters. As always, if anyone knows anything more about Harold Seroy or New York subway two sheets, I’d love to hear from you. 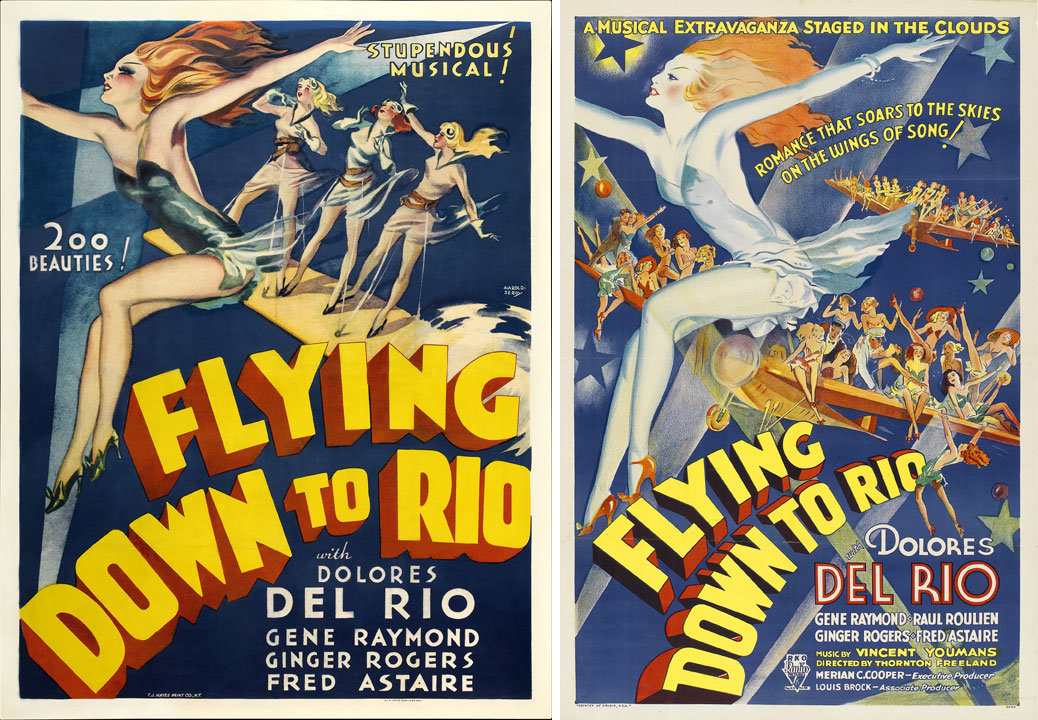