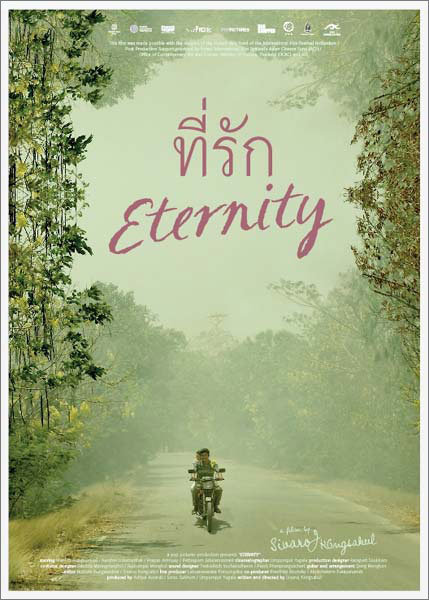 Movie Poster of the Week is off to the Rotterdam Film Festival, always a treasure trove of international arthouse film posters. This one sheet for Thai Tiger Award competitor Eternity already caught my eye. Though it may feel as if we’ve seen this image in Asian cinema many times before, I like the way the jungle horizon is mirrored, framing the title (though the title itself could be prettier). One of fourteen international feature films competing for the award (won last year by Pedro González-Rubio’s wonderful Alamar, among others), Eternity, the debut film of director Sivaroj Kongsakul, is described as a film which “follows a man through three stages of being - as a ghost wandering through his childhood home, as a young man falling in love with his future wife, and as an absence in the life of his surviving family in the days following his death.” Sounds and looks like the kind of leisurely, visually gorgeous Asian art cinema that Rotterdam excels in, and I, for one, am not complaining. More to come from Rotterdam this week.