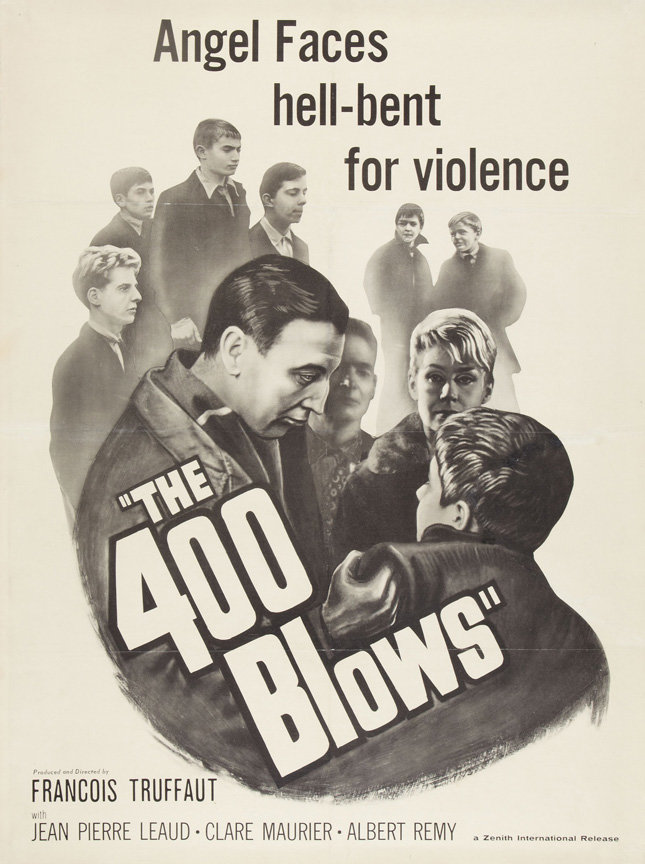 If François Truffaut hadn’t been taken from us in 1984, at the age of 52, he would have turned 80 last Monday. At one point he had said that his goal was to make thirty films and then retire to write books. At the time of his death he had made twenty-five.

I recently came across this poster for the American release of Truffaut’s first film, Les quatre cent coups﻿ and was struck not only by its lurid and rather innaccurate tagline—"Angel Faces hell-bent for violence"—but also by the fact that it refuses to capitalize on the one thing that made the film such a success: namely the face of Jean-Pierre Léaud﻿ as Antoine Doinel. In the poster Léaud﻿’s angel face is barely seen. Doinel’s parents, played by Albert Remy and Claire Maurier (misspelled in the credits), are more prominent, while Doinel seems like one of a number of undistinguished schoolboys. The tagline’s plural makes it seem as if the film is much more about a group than about an individual.

Les quatre cent coups﻿﻿ premiered at the Cannes Film Festival in May 1959, winning the 27-year-old Truffaut the Best Director prize. It opened in New York—at the Fine Arts Theatre, at 58th and Lexington—on the 16th of November, distributed by Zenith International Film Corporation. (Right around this time, Zenith, a company that seems to have been in existence from the mid 50s to the end of the 60s, was in the middle of a conflict with the City of Chicago which had refused them a permit to exhibit Louis Malle’s The Lovers on the grounds that it was “immoral and obscene.” Zenith appealed the decision as unconstitutional but ended up losing the appeal two years later in the Supreme Court.)

The diminishing of Léaud﻿ in the poster is especially strange since it was recognized right from the start that the character of Antoine Doinel, and the performance of the unknown Jean-Pierre Léaud﻿, was the star attraction. In his rave New York Times review of the film on opening day, Bosley Crowther, getting it right for once, wrote “words cannot state simply how fine is Jean-Pierre Leaud in the role of the boy—how implacably deadpanned yet expressive, how apparently relaxed yet tense, how beautifully positive in his movement, like a pint-sized Jean Gabin. Out of this brand new youngster, M. Truffaut has elicited a performance that will live as a delightful, provoking and heartbreaking monument to a boy.﻿”

A second poster from Zenith gives us more Léaud﻿ and may have been created later in the run. This poster retains the tagline, though slightly less prominently, but introduces a ridiculously literal fist blasting through the title treatment, adding to the impression given by the title that this was a film about violence, or at the very least about corporal punishment. In fact the French title is from the expression “faire les quatre cent coups” which means “to raise hell” or “to live a wild life.” On the first American prints the subtitler Noelle Gilmore translated the title as Wild Oats, but Zenith didn’t like that title and changed it to the more literal translation The 400 Blows. Apparently “400 dirty tricks” would be more accurate, though less poetic.﻿* 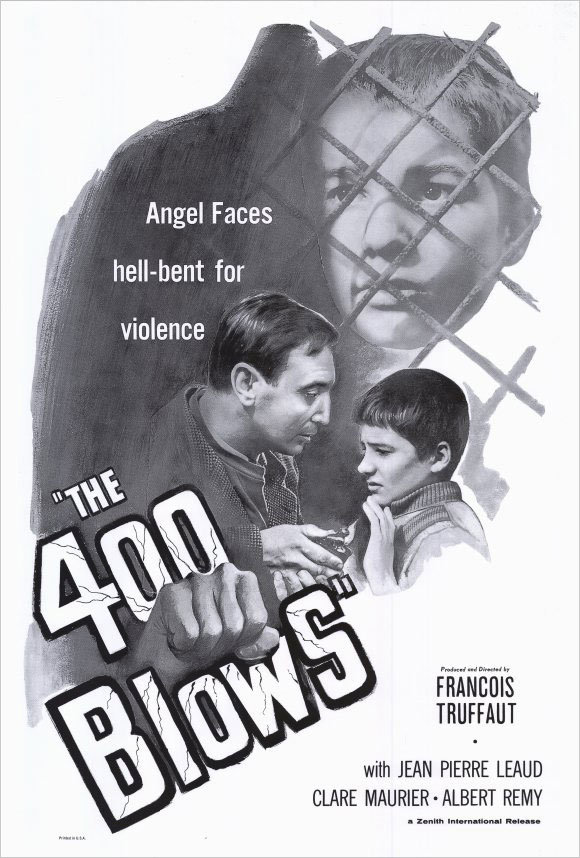 The French poster for the film, by the great Russian-born poster artist Boris Grinsson—who had already been designing posters for 25 years, mostly for Hollywood imports, but also for much of the "tradition of quality" that Truffaut disdained—is of course a masterpiece and a classic. Grinsson uses the iconic final shot of the film, but chooses to give Leaud a faraway look in his eye rather than the famous stare at the camera that Truffaut froze on. In fact none of the illustrated posters really manage to capture Léaud﻿’s character: the impish mischievousness and defiance that are so central to the film’s appeal. 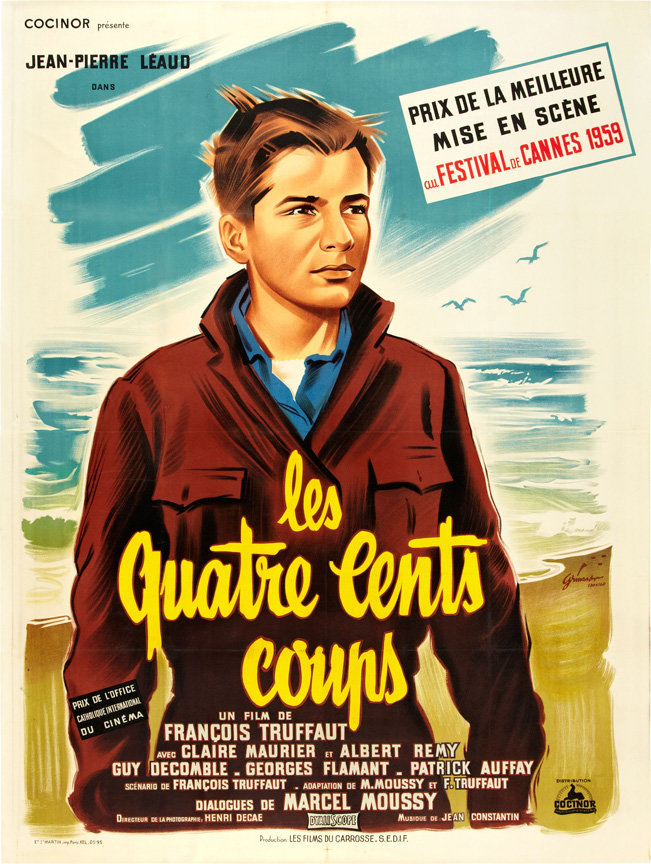 The Spanish and Belgian posters are knock-offs of Grinsson’s... 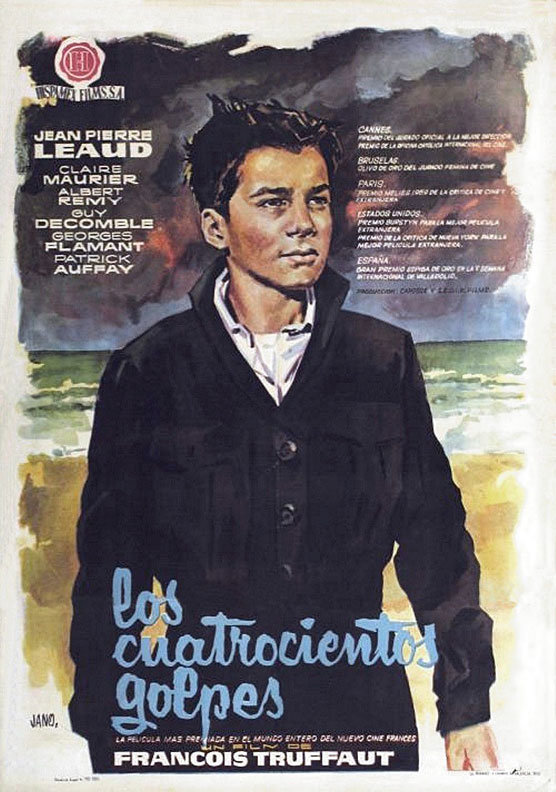 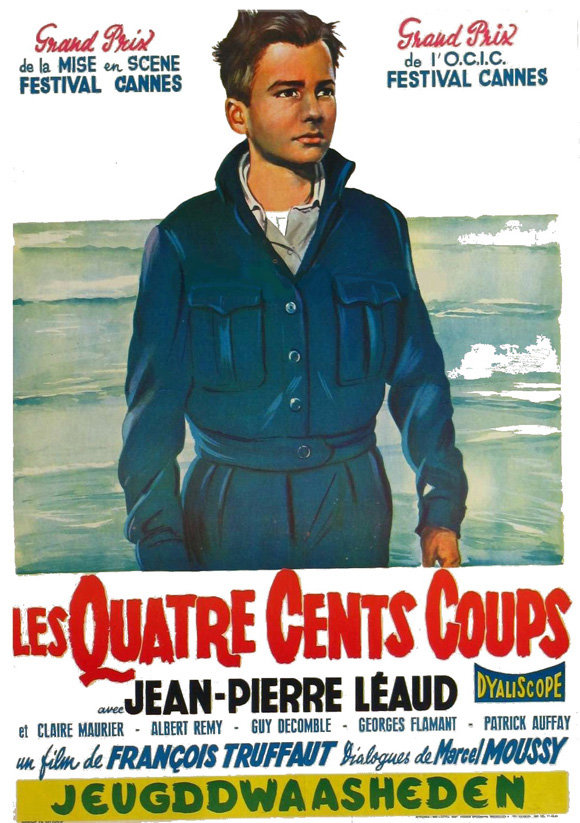 ...but the Japanese poster, by Hisamu Noguchi, using another of the iconic shots of the film, is one of my favorites, capturing a little more of Doinel’s chutzpah than most. 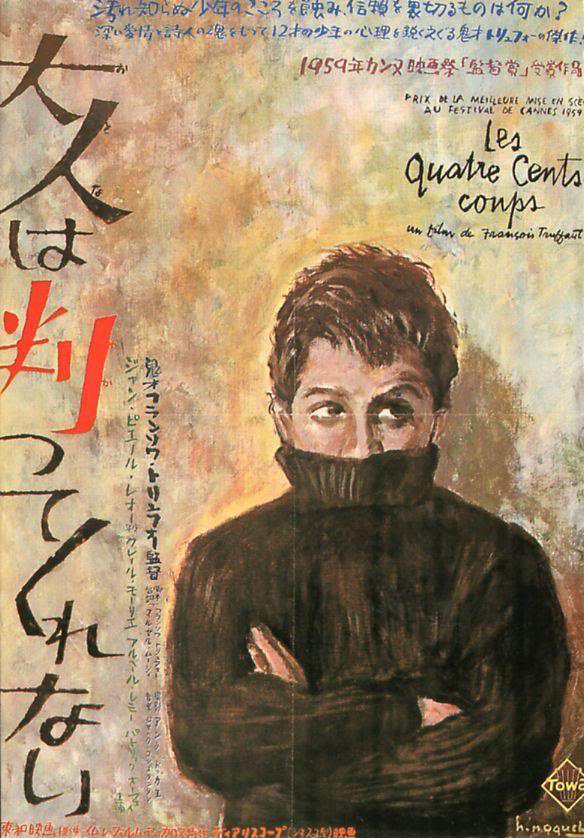 There are two Italian posters by Enrico DeSeta, one of which forefronts Doinel but also makes him look much too plaintively innocent (there is a Russian poster for the film, which I couldn’t find a good copy of, which also turns Doinel into a wide-eyed cherub). The second one actively backgrounds him as the witness to an affair. 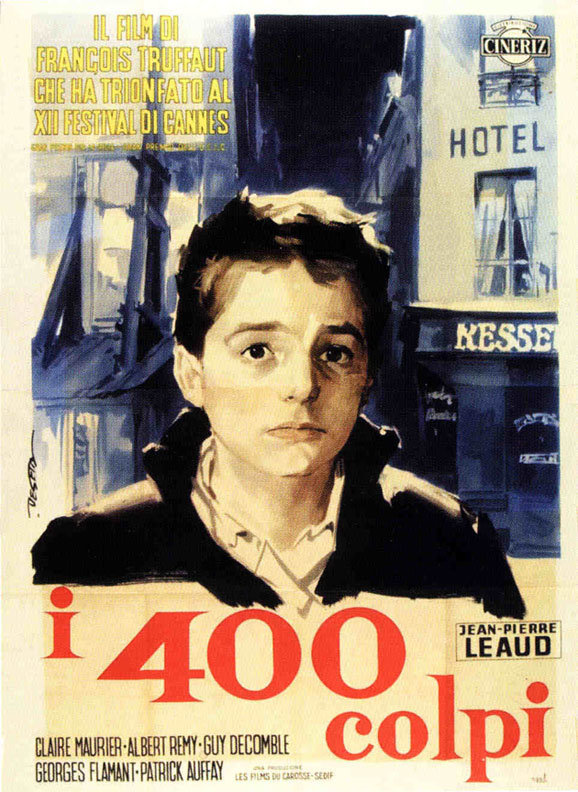 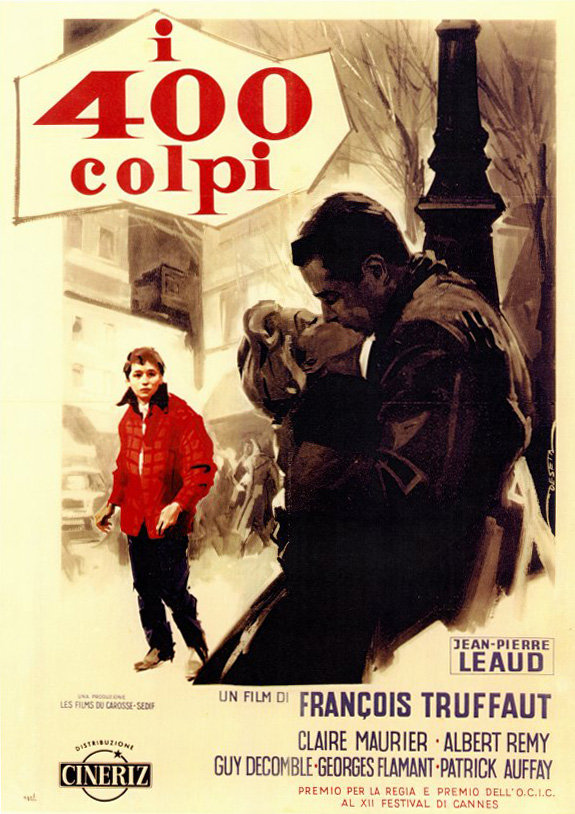 Capturing Doinel more obliquely is the fragmented Polish design by Waldemar Swierzy which I mentioned in my discussion with Jay Shaw last week. ﻿ 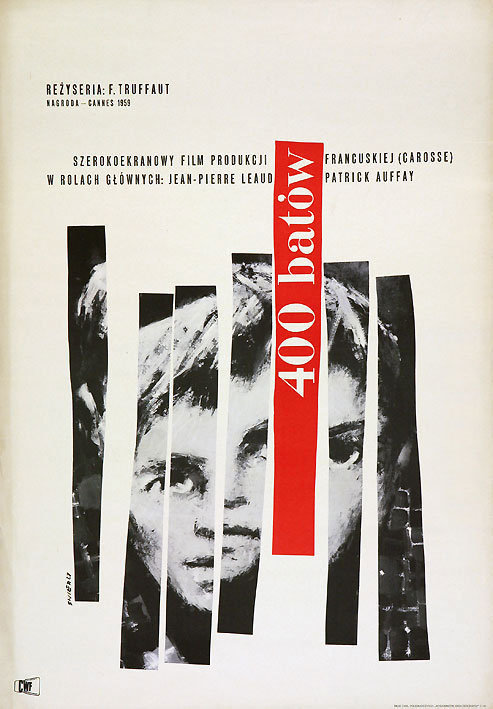 There have been plenty of re-release posters as the film has been revived again and again over the years. Most of them use photographs, but I quite like this British re-release quad (somewhat in the style of Peter Strausfeld) from 1985. 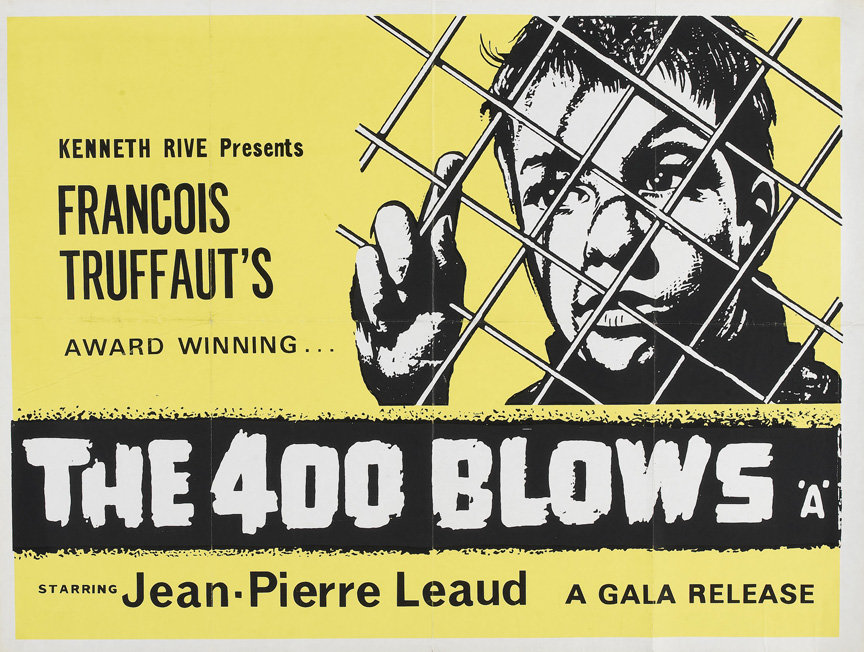 *In a June 1958 letter to screenwriter Marcel Moussy (translated by the late, great Gilbert Adair), Truffaut refers to the film they about to work on together as ‘La Fugue d’Antoine’. Two weeks later he writes “So everything is going well and roll on 8 July! My wife is expecting a child on 6 February next year, the exact date of my twenty-seventh birthday; on more or less the same day, I will have—touch wood—the master print of my film, for which, I inform you, I’m looking for a title; the ones I’ve thought of are too literary: ‘The 400 Blows’, ‘The Awkward Age’, ‘The Four Thursdays’**, ‘The Little Pals’ etc.”

** The Four Thursdays is a reference to the French expression “dans la semaine des quatre jeudis” which came from the fact that children didn’t go to school on Thursday and thus a week of Thursdays was something ideal that would never happen, a bit like the expression “when pigs fly.” For a film about truancy it would have been a perfect title, though even harder to translate into English.

Merci à Clemence Taillandier for help with the French expressions.