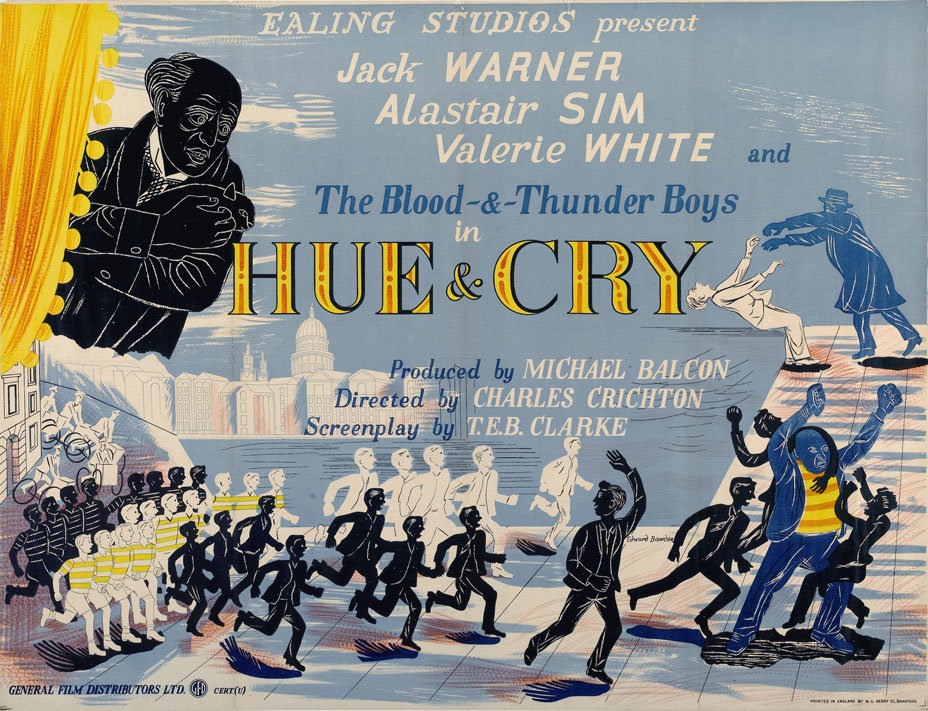 Continuing my London theme from last week, this wonderful three-color poster for the Ealing Comedy Hue & Cry was the work of renowned British illustrator Edward Bawden.

Directed by Charles Crichton, Hue & Cry was the first in what was to be a rich decade of comedies made by Ealing Studios. Shot on location in war-ravaged London, the film centers on a gang of boys who foil the plans of a master crook played by the redoubtable Alastair Sim (drawn by Bawden as black as night and stroking a cat in full Dr. Evil mode).

Edward Bawden (1903-1989), a favorite artist of Edward Gorey who lamented that Bawden wasn’t better known, was a prolific illustrator, graphic designer and painter. In the 1930s, as a commercial artist, he produced posters for Fortnum & Mason and the London Underground, among many other commissions. During the Second World War ﻿he was selected as one of Britain’s official war artists and spent much time documenting life in the Middle East, especially Iraq, in a series of watercolors which elevated his standing in the art world.

Hue & Cry, in 1947, would have been one of his early commissions after the War. Noel Carrington wrote in the journal Graphis that same year: “The reader will observe one strong marked characteristic of Bawden’s designs, and that is their architectural quality, or perhaps more correctly his facility for pattern. No English artist of our day has produced such brilliant typographic borders, a minor art which needs the combination of great sensibility and patience. He has been equally successful in designing wallpapers﻿.… Bawden’s sense of pattern is to be seen no less in his appreciation of building styles, for in a few strokes he can give the essentials of a whole period of architecture.”﻿

The details of Bawden’s illustrations for Hue & Cry, despite their ﻿deceptively simple and naive style, ﻿are particularly wonderful. As is his varied use of blue, black and yellow ink. 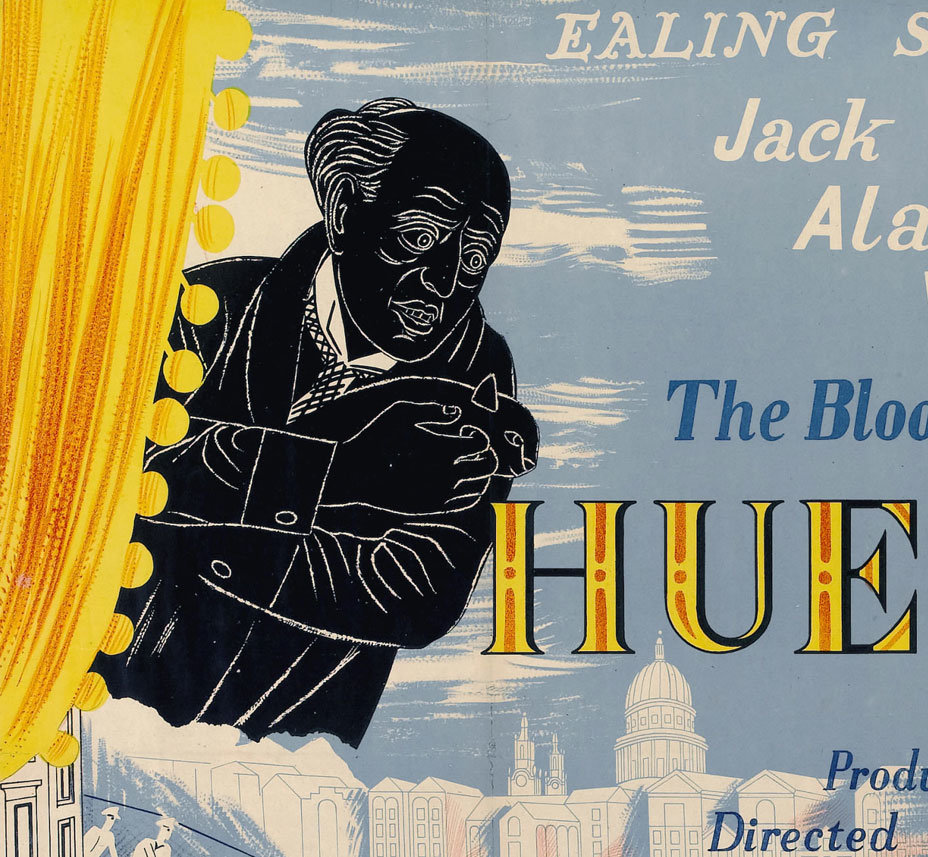 The lettering of the poster is all hand-drawn. Bawden had taught at the Royal College of Art ﻿at the same time as Edward Johnston, the “father of modern calligraphy” and designer of the sans-serif typeface used throughout the London Underground for over 60 years. According to Peyton Skipwith in Apollo Magazine, “Bawden claimed to have attended only one of Johnston’s lectures, on the grounds that as he had spent an hour discussing the letter ‘a’, the chance of ever reaching ‘z’ seemed unlikely.﻿” 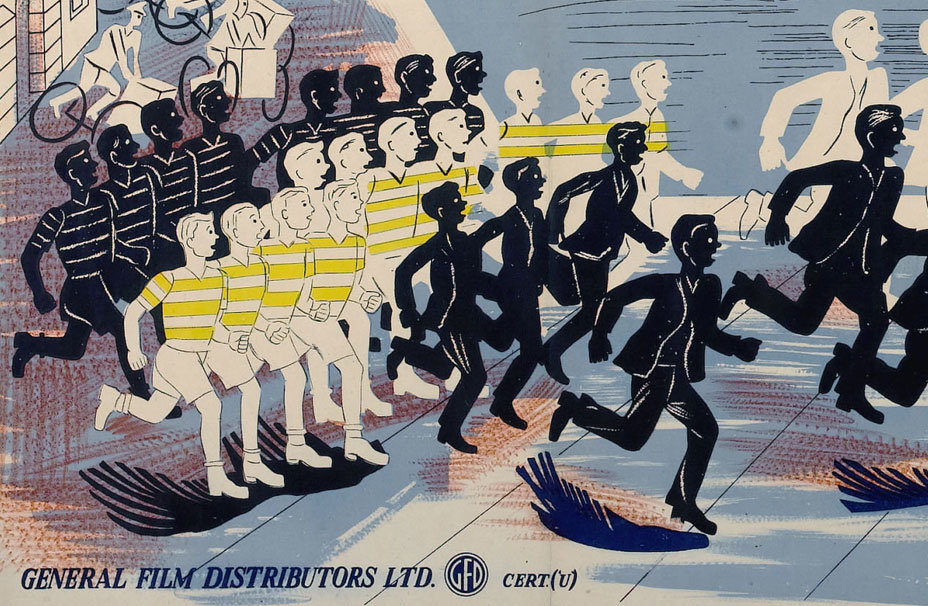 When Bawden’s final exhibition was reviewed in the London Times in 1989, the critic J. R. Taylor wrote “Perhaps because this is an English manner of going about art, we suppose that lightness of effect is incompatible with essential seriousness. If Bawden were French, now, we would have more notion of how to appreciate his unique combination of intelligence and fun, true emotion and light lyric grace. Bawden remains unclassifiable, and therefore impossible to estimate. Which is probably just the way he wants it.”﻿ 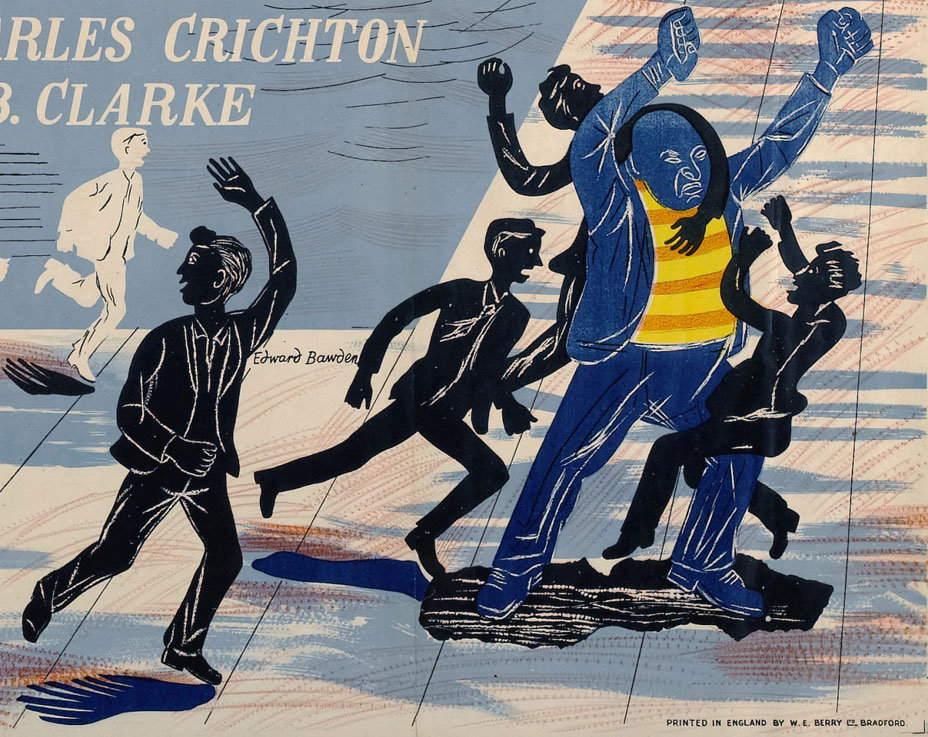 I have found only one other movie poster designed by Bawden, for another Charles Crichton-directed Ealing Comedy, The Titfield Thunderbolt. Since the film was shot in Technicolor and was one of the first British comedies ever to be filmed in color, the poster is vibrantly colored in the style of a children’s book illustration. 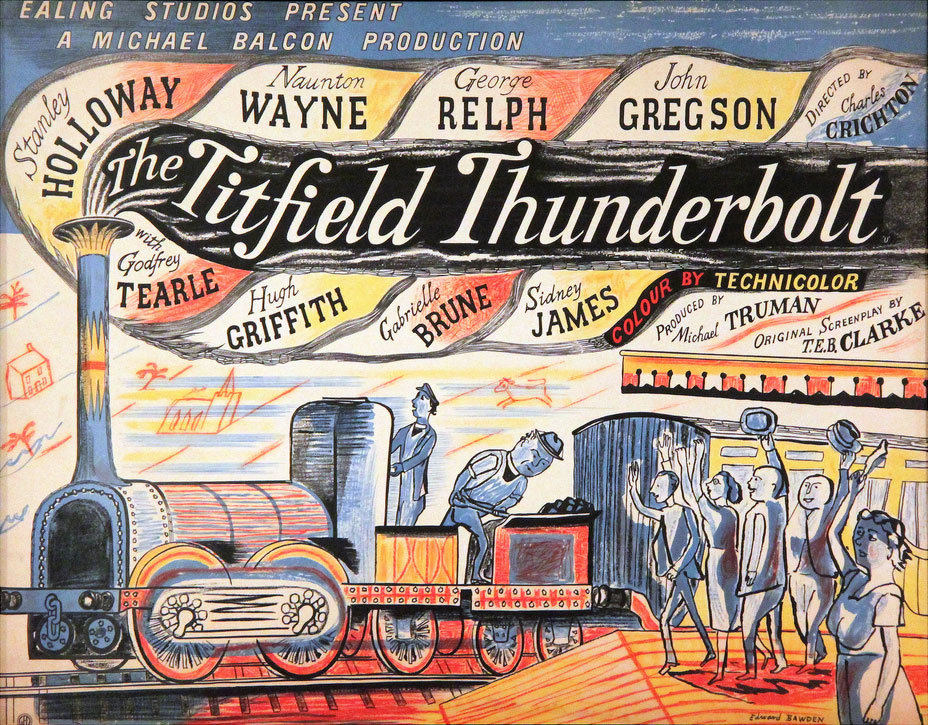 But I also found, among Mikey Ashworth’s incredible collection of British art and ephemera, this film trade ad by Bawden. The right half of it seems to be missing, but the illustrations are obviously from Hue & Cry. 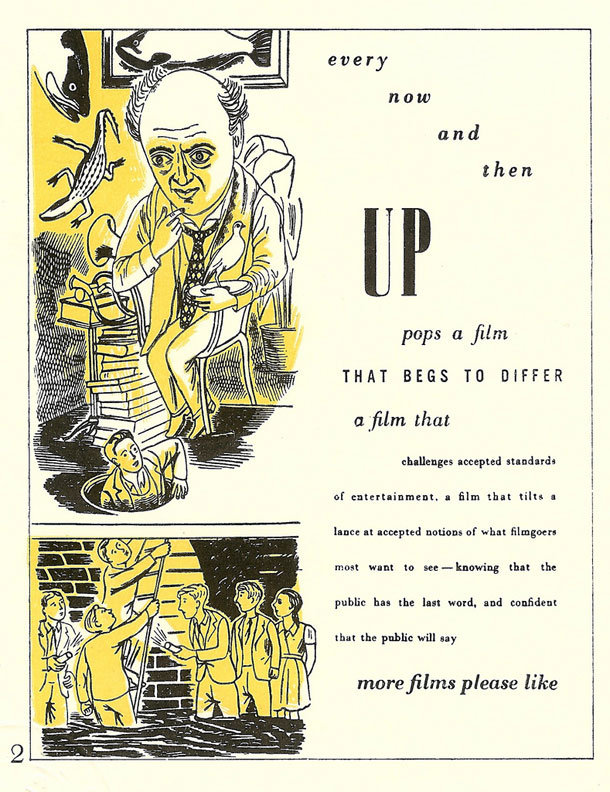 More of Bawden’s charming commercial work, all with that “unique combination of intelligence and fun, true emotion and light lyric grace” can be seen in the ads and book covers below. Some of his stunning wallpaper designs can be seen here and much more of his work can be seen on the Flickr page Edward Bawden - Artist and Illustrator. 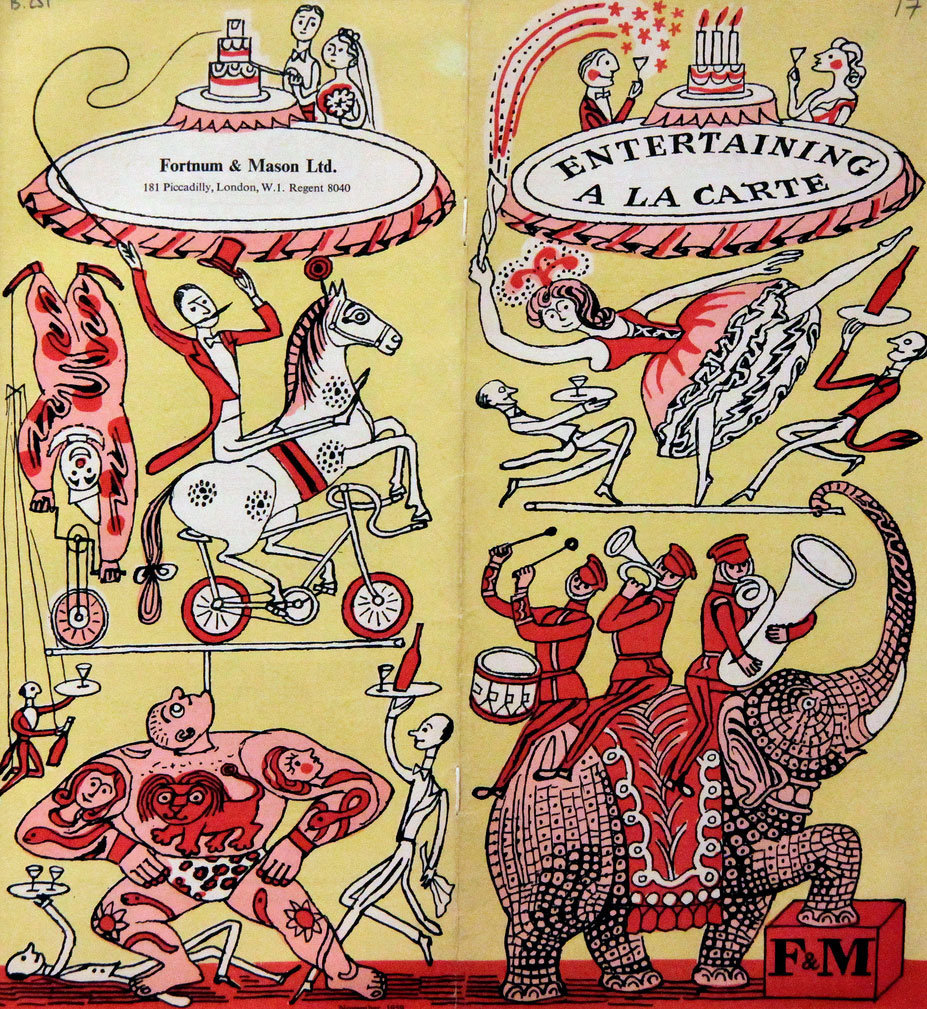 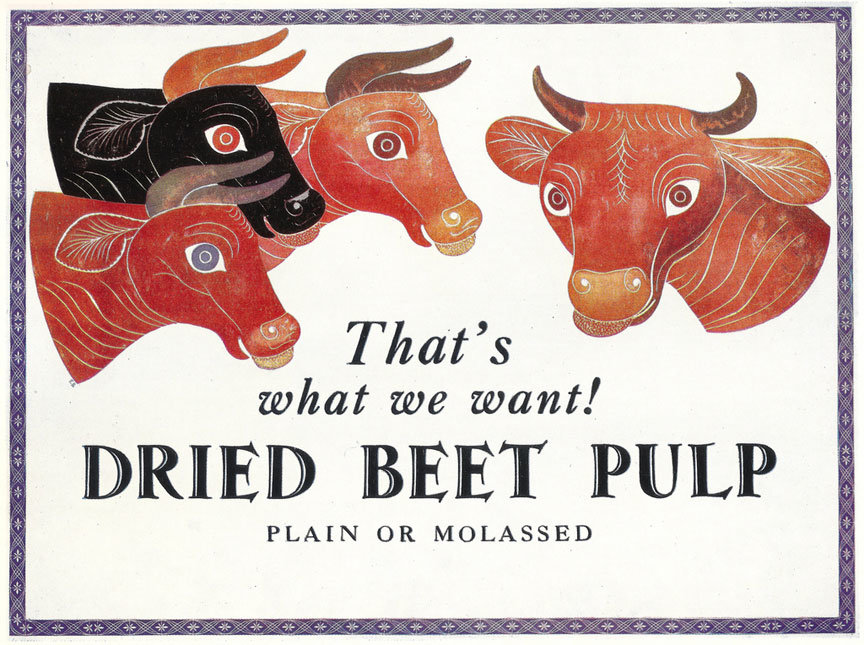 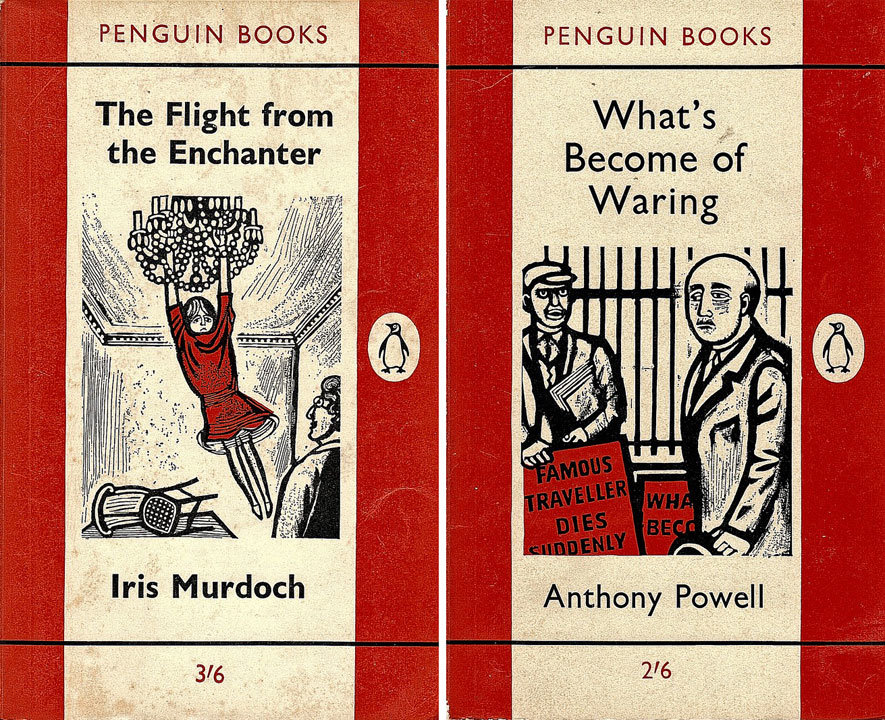 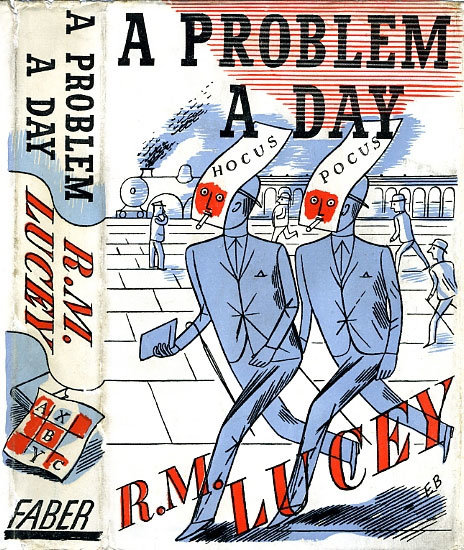