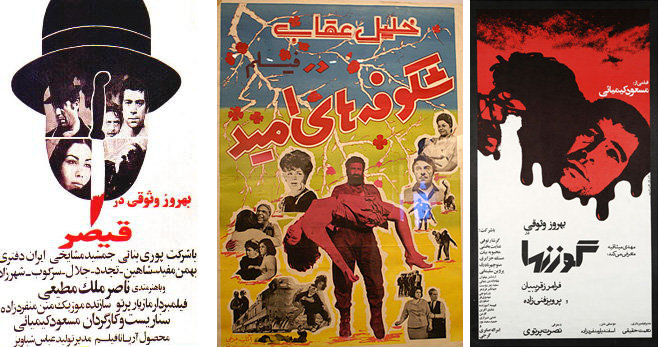 At the Film Society of Lincoln Center in New York last week some of us were lucky enough to enjoy Pomegranates: Like a Phoenix from the Ashes, a fascinating compilation of rare film clips, commercials and music videos from Sixties and Seventies Iran, a cinematic follow-up to the superb Pomegranates compilation of pre-revolutionary Persian pop, funk and folk on the Finders Keepers record label.

Curated by Mahssa Taghinia and Tom Fitzgerald, the evening included such gems as this must-see clip of the amazing Faroozan—a Persian cross between Rita Hayworth and Fergie—as well as extended clips from what Taghinia described as three of the most important films of the period: Gheysar (a.k.a. Qeysar) (1969), Gavaznha (The Deer) (1975), and Bon Bast (Dead End) (1977).

This led me, naturally, on a search for movie posters of the era, of which there is very little written online. Even the Iranian-born, London-based poster-buff Tony Nourmand (co-owner of Reel Poster Gallery and co-author of the Film Posters of the 30s etc. series) has said of the Iranian films of his childhood “Unfortunately, I have never been able to track down original Iranian posters for these films. As far as I know, the posters that are on exhibit in the Tehran Museum of Film are American or European posters for Iranian films. I would love to find the originals.”

Most of the posters I found are from fan pages for actor Behrooz Vossoughi and director Masoud Kimiai, the star and director respectively of the aforemenioned Gheysar, a revenge drama that changed the face of Iranian cinema (a young graphic designer named Abbas Kiarostami designed the titles) as well as Iranian men’s hairstyles, apparently. The poster for the film is above left. (The clip we saw centered on a bathhouse killing that predates Cronenberg’s Eastern Promises by forty years.)

The posters of the period, as seen below, are mostly illustrated, rather than photo-based, and heavily influenced by Bollywood advertising. Iranian historian Ali Hasouri, in an interview to mark a Swedish exhibition of pre-revolutionary posters, has said that the artists, far from being successful designers, worked up to 14 hours a day for very low wages. He said “most of them worked on the floor in dark isolated rooms with minimum resources. It often occurred that the posters were made in only one day with oil and color in large dimensions. In reality these were creative artists who were obliged to use such methods to feed themselves.”

The poster top right is for The Deer (1976), also directed by Kimiai, which a 2009 poll of the leading Iranian film critics voted as the greatest Iranian film of all time. As for the poster top center, one of my favorites, and one of the most graphically interesting (along with the Bass-esque design bottom left), I have no idea what film it’s for and would welcome any information about it. In fact if anyone knows of other resources for Iranian posters of the period, do let me know.