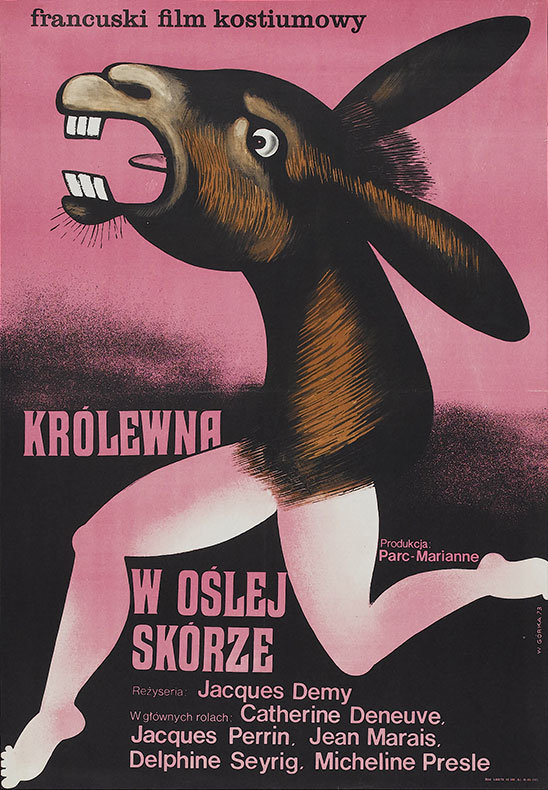 ﻿The Cinémathèque Française is currently running a major exhibition titled Le monde enchanté de Jacques Demy (through August 4) devoted to the great romantic fantasist who brought us such candy-colored musical reveries as The Umbrellas of Cherbourg, The Young Girls of Rochefort and Donkey Skin. What caught my eye was a video on their website (unsubtitled, unfortunately) ﻿in which the head of the poster department, Jacques Ayroles, takes us into the Cinémathèque’s vaults (which contain some 25,000 posters) and talks about the various posters for Demy’s films.

The exhibition seems to place particular emphasis on Peau d’Âne or Donkey Skin, Demy’s beloved Cocteau-esque fantasy which, in 1970, was his greatest success (with over 2 million admissions in France) and which came hot on the heels of one of his most disappointing flops, the L.A.-set Model Shop. Based on the 17th-century fairytale by Charles Perrault (famously illustrated by Gustave Doré), Donkey Skin stars Catherine Deneuve as a﻿ ﻿princess whose father the king (Jean Marais) believes he has to marry her to fulfill a promise to his dying Queen (also played by Deneuve) that he will only re-marry a woman as beautiful and virtuous as she. In order to put the kibosh on the incestuous union the princess demands three supposedly impossible wedding gifts: dresses the color of the sky, the sun and the moon. When he comes up with the goods, she asks for the hide of his prized magical, jewel-excreting donkey. That last gift fulfilled, the princess flees into the forest wearing the donkey hide, until she is discovered by a neighboring prince (played by Winged Migration director Jacques Perrin).

There is a section of the website devoted to sketches and photographs from the film and the exhibition itself displays various costumes and props, including the three dresses. 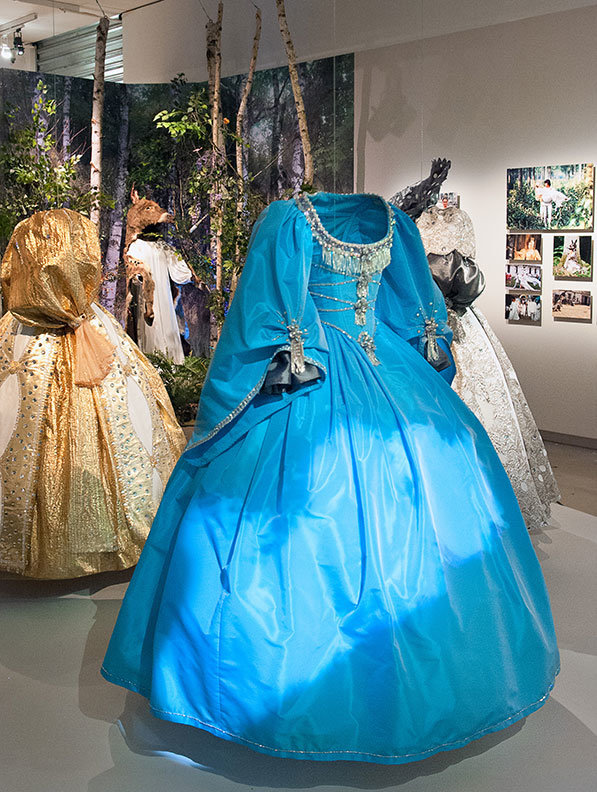 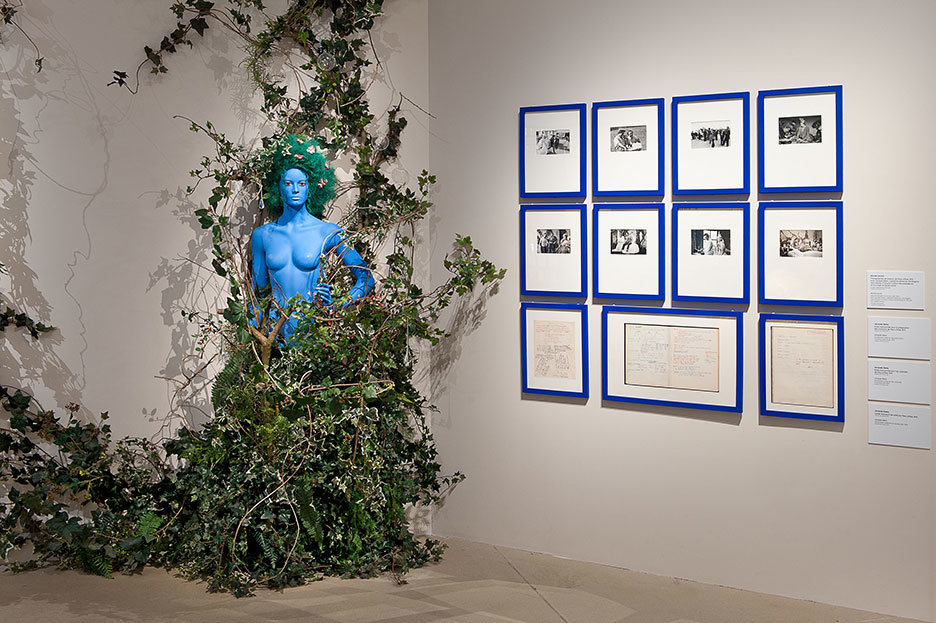 Photos courtesy of the Cinémathèque Française.

All of which gives me an excuse to collect the spectacularly varied international posters for the film, beginning with, at the top, Wiktor Gorka’s stunning pink, Polish design from 1973 (the title translates as “Princess in donkey skin”). One of Gorka’s finest, most striking works, the poster gives the tale of threatened incest a necessary note of blind panic.

The original French poster was illustrated by the English erotic-fantasy artist Jim Leon, who also designed the film’s sets. The same illustration and title treatment is seen in the film’s opening credits. 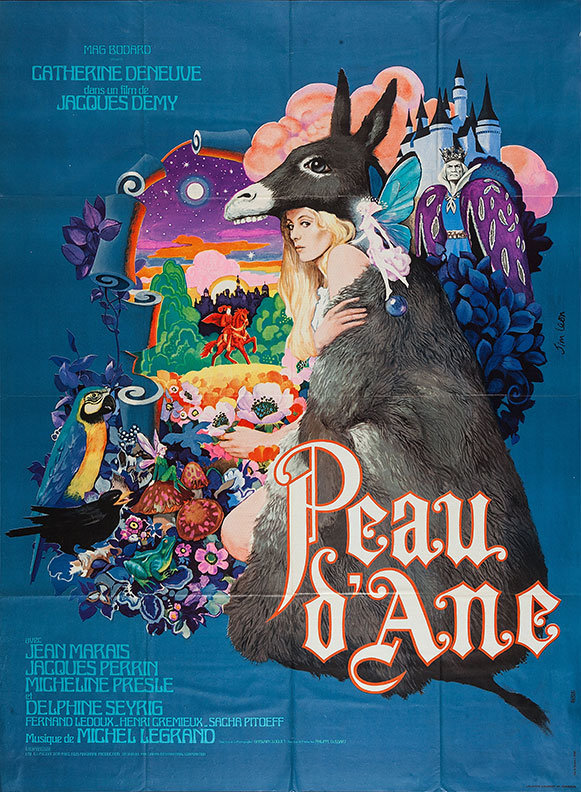 The 1972 Czech poster, below, which was designed by Alexei Jaros, co-opts part of Leon’s illustration and doubles the image of the Lilac Fairy (played in the film by Delphine Seyrig) but concentrates on a blue-faced Jean Marais and a floral wallpaper background. 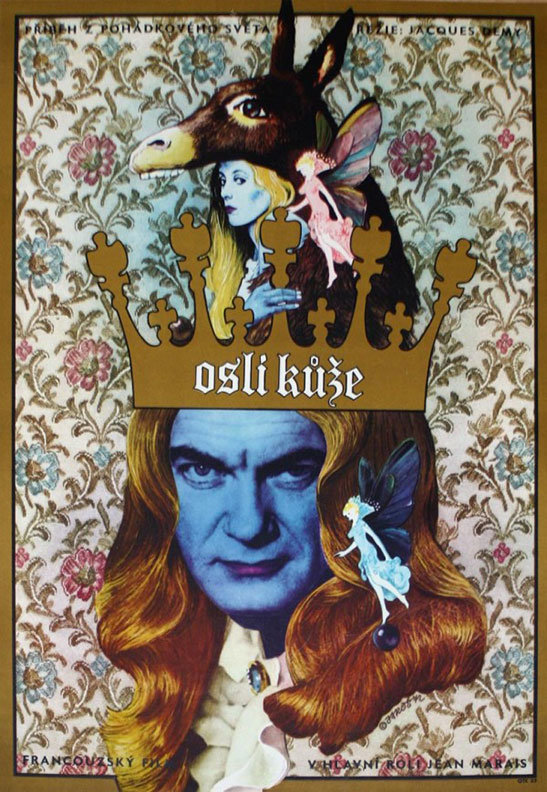 A not particularly interesting 1970 Japanese poster... 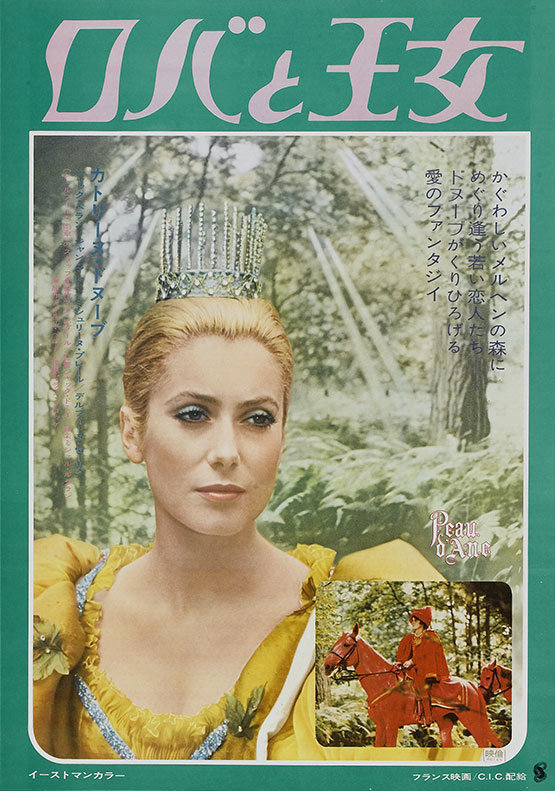 Two Romanian posters, one illustrated, one in that peculiar Romanian house style in which black and white halftones are placed against a background of random abstract shapes. 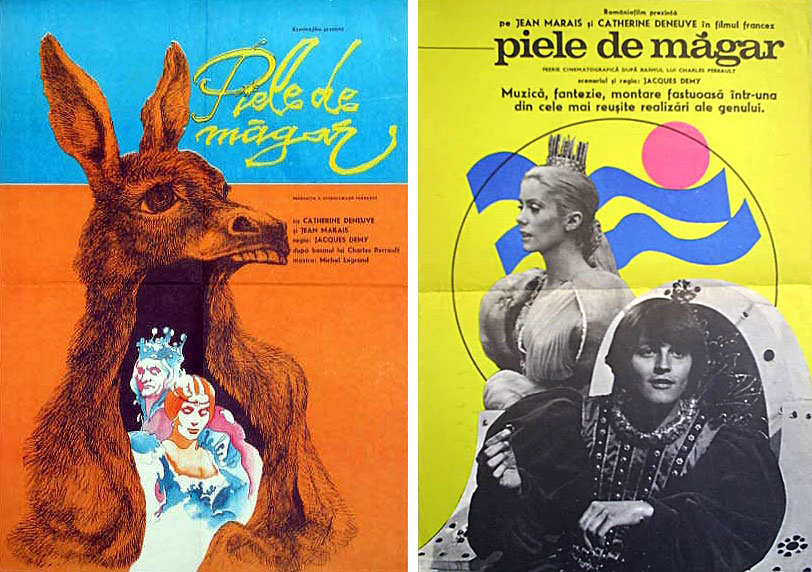 It seems that Donkey Skin was not released in the US until 1975 (unless IMDb has that wrong). In Janus’s poster illustrated by Lee Reedy (who I am assuming is the same Lee Reedy who now paints images of the American West) all the elements of the film are beautifully configured in the style of a stained-glass window. 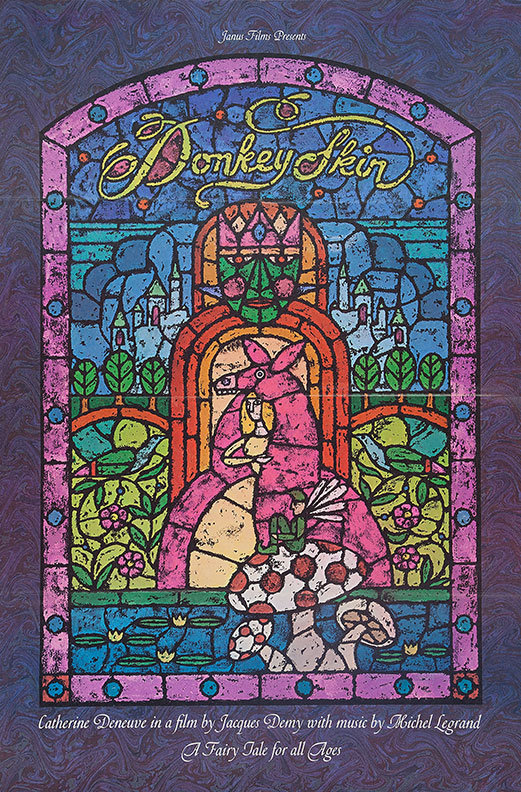 And finally here are three gorgeous chirashi posters for a 2005 Japanese re-release of the film in which Catherine Deneuve is seen in her three wedding dresses. I particularly love the little icon of the donkey, top right, and the infographic-style renditions of the sky, sun and moon. This is also the only poster in which Jean Marais’ fabulous cat throne makes an appearance. 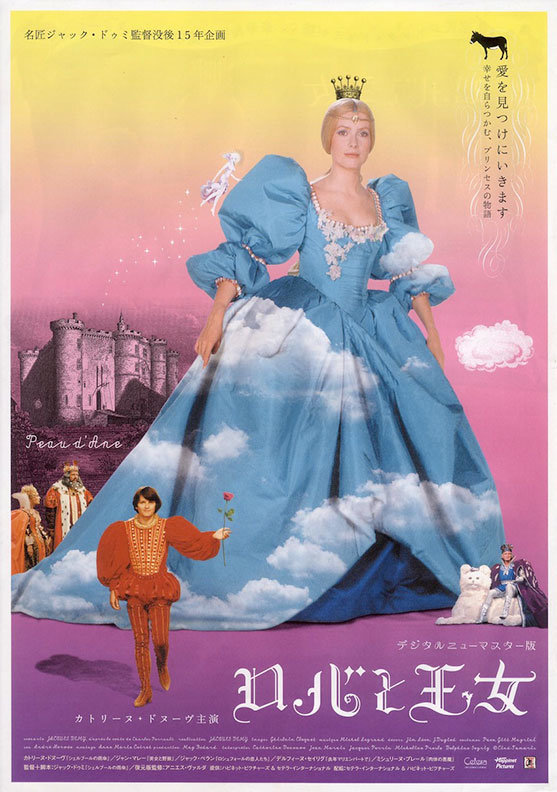 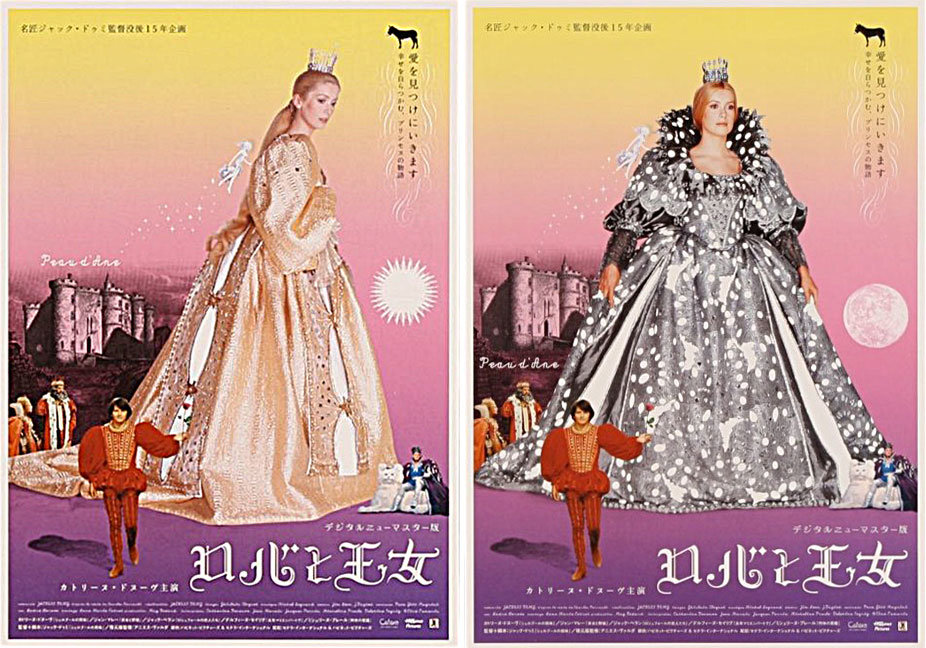 As one last aside I just want to share these shots from Agnès Varda’s documentary The Universe of Jacques Demy in which home movies capture the enchanted visit to the Donkey Skin set (the Loire chateau of Chambord) of none other than ﻿François Truffaut and Jim Morrison.

Gorka poster and others courtesy of Heritage Auctions. Many thanks also to Xavier Jamet at the Cinémathèque Française.