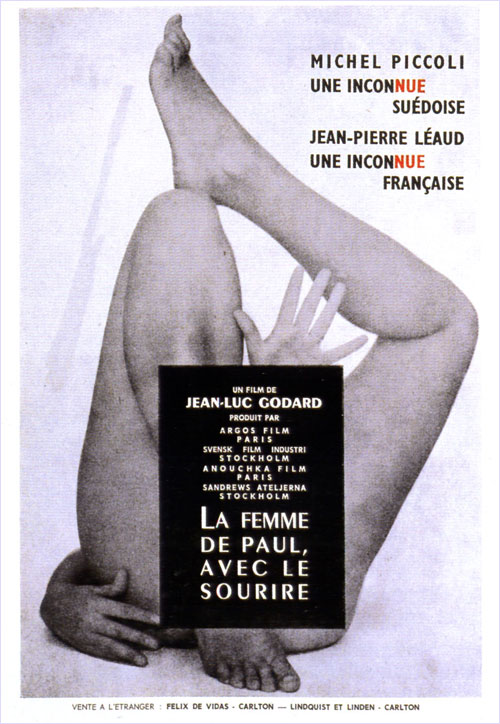 Movie Poster of the Week was on hiatus for the last month as I scoured Europe for inspiration. In a film poster store in Paris I picked up an out of print  book of Les affiches de la nouvelle vague which, though it had a lot of the usual suspects, also contained some gems I'd never seen before, including this small poster for a Godard film that was never made.

The book has no information on the project, but it turns out to be an announcement for a 1966 French-Swedish co-production to star Michel Piccoli and Jean-Pierre Léaud, as well as an unknown Swedish starlet (an "inconnue" with emphasis on the "nue") and a French counterpart, to be based on two stories by Guy de Maupassant. Godard wanted to adapt the stories ("La Femme de Paul" and "The Signal") for his first project to star Léaud, who, after his early collaborations with Truffaut, had been working as an assistant director for Godard on Une femme mariée, Alphaville and Pierrot le fou. According to Richard Brody in his recent book on Godard, Everything is Cinema, producer Anatole Dauman bought the rights to the stories for Godard and found Swedish co-producers, "whose investment was contingent on a Swedish on-screen presence." Dauman must have had this poster made to advertise the project at Cannes, hence the mention of the InterContinental Carlton hotel as the venue for foreign sales, and the poster, in true Cannes style, trumpets promised nudity over Maupassant. But the film, in this form, was not to be. Piccoli dropped out, changes were made to the story, Godard was introduced to yé-yé star Chantal Goya, and the film eventually became Masculin Féminin. 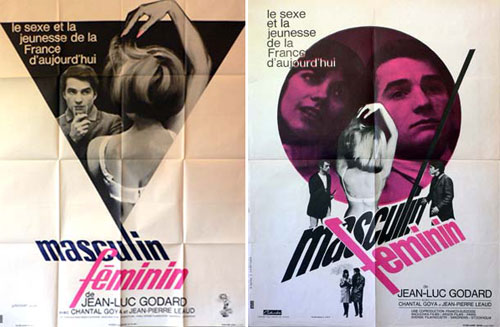 Movie Poster of the WeekGodard
5
Please login to add a new comment.