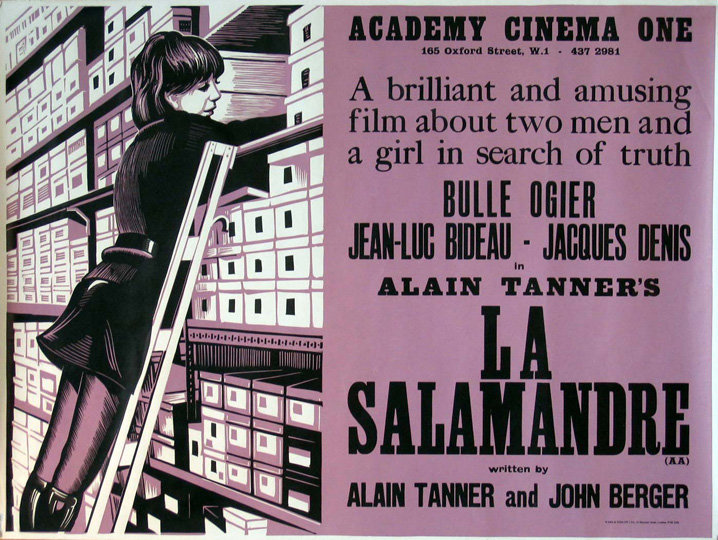 Swiss director Alain Tanner, who turned 80 last December, is one of the forgotten men of European art cinema. Though his films were regularly distributed in the US in the 1970s and ’80s, Tanner has not had a film released here since 1987’s A Flame in My Heart, though he's made 10 films since (his last, Paul s'en va, was made in 2004) and not a single one of his films is available on Region 1 DVD. But, in a nice piece of serendipity, Anthology Film Archives in New York is hosting a Tanner retrospective this week, the same week that his longtime distributor, New Yorker Films, is opening for business once again. A double cause for celebration.

La salamandre (which plays on Sunday evening and I urge all New York film lovers to see it) was Tanner’s breakthrough hit in 1971. Written with English art critic and novelist John Berger (the first of three collaborations), it is the story of two men, a journalist and a fiction writer, investigating a young woman (Bulle Ogier, stunning) charged in a shooting incident. Ogier’s character, who drifts from job to job, finds work in a shoe store (where she fondles the feet of her customers), hence this wonderful British poster designed by the great woodcut artist Peter Strausfeld.

I was hard pressed to find many other particularly striking Tanner posters, though I like the cut-and-paste, two-color, no-expense-spared simplicity of New Yorker’s poster for his biggest hit, Jonah Who Will Be 25 in the Year 2000; and the Middle of the World (Le Milieu du Monde) poster is suitably Godardian, with a splendid ’70s typeface.

The first screening of La Salamandre last night clashed with Film Forum’s delightful evening with Scottish director Bill Forsyth (another somewhat forgotten man and another great humanist filmmaker). In another piece of serendipity I just discovered that, in the same year, 1999, both directors made sequels to their best loved films: Forsyth with Gregory’s Two Girls (“He’s back—and he’s got some serious explaining to do”) and Tanner with Jonas et Lila a demain, which indeed found Jonah aged 25 in the year 2000. Neither film was ever released in the US or, as far as I know, even screened at festivals here. Sometimes you shouldn’t mess with a good thing. (David Lynch and Nikita Mikhalkov take note).

Movie Poster of the WeekTanner
2
Please login to add a new comment.