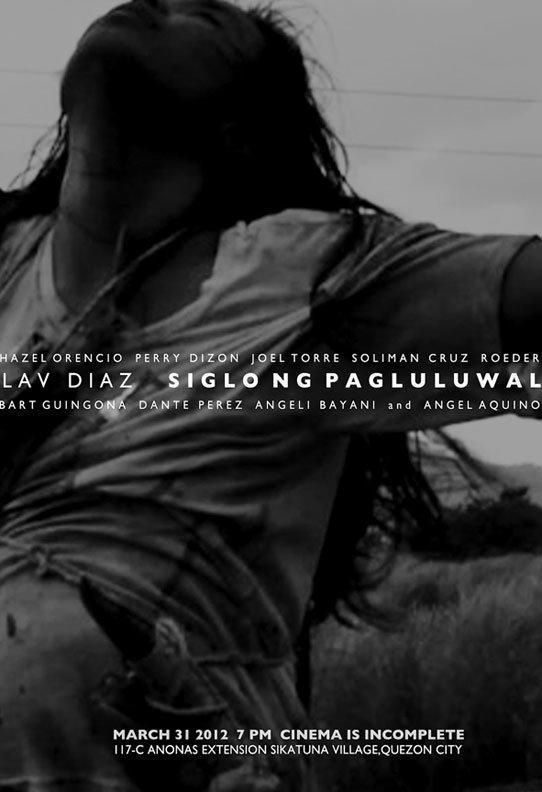 Stark, elemental and haunting, these two posters, one with the title in Tagalog, one in English, for Lav Diaz’s 6 hour Century of Birthing, were made for a recent showing of the film in Quezon City in the Philippines. Like many great posters I come across online these days it’s debatable as to whether they really qualify as “posters” since they are actually digital files that have never actually seen the inside of a printing press, but since they are created as if they were posters, and since digitally is the way most of us see movie posters these days I’m giving them a pass.

Century of Birthing (in, I think, its US premiere) will be playing in New York in a significant retrospective of a director whose films screen all too rarely, and mostly not at all, in the US﻿. The series, at Exit Art, starts tomorrow with Diaz’ nearly 11-hour long 2004 film Evolution of a Filipino Family. I’ve never seen any of Diaz’s work (he has been making films since 1998) but I have been hearing tantalizing things about it for the past few years and, as daunting as his running times are, I can’t wait to see it. According to UK curator George Clark “Lav’s work is unlike anything else in cinema, its marries the aesthetic of Béla Tarr with the performance and conspiratorial narratives of Jacques Rivette, the existentialism of Dostoevsky with the levity and atmosphere of Apichatpong Weerasethakul” which is more than enough to reel me in. Daniel Kasman also wrote beautifully about Century of Birthing when it closed the Venice Film Festival last fall.

The posters are simple yet striking, with perfectly placed type and soft, almost blurry images that hint at Diaz’s digital cinematography (though Century of Birthing is partially shot in hi-def). They were designed by writer, blogger and filmmaker Dodo Dayao for a screening he programmed at Cinema Is Incomplete, a new cine-space in the Philippines’ most populous city. Dayao told me by email that “Cinema Is Incomplete is a DIY screening venue run by Jewel Maranan, a documentary filmmaker, and her friends. They converted a room in their apartment into a screening room and hold screenings of local independent films every Saturday. They occasionally invite foreign indie filmmakers to showcase their work as well. It’s small, very informal (people sit on a carpeted floor) and not air-conditioned but comfortable and they serve food and drinks to the audience. It’s been going on for several months but picking up a lot of steam, as screening venues here are few and far between: Mogwai Cinematheque shut down last year due to conflicts with their landlords and the bigger screening venues and cinemas generally ignore independent stuff. Oh, the Cinema Is Incomplete screenings are free.”

Century of Birthing also played recently—and Lav Diaz appeared in person as he will at Exit Art on May 5—at the Slow Cinema Weekend, part of the AV Festival in Newcastle in the UK, a smorgasbord of leisurely, languorous and lengthy masterpiece by Diaz, Lisandro Alonso, Fred Keleman, Ben Rivers and Bela Tarr. A friend of mine who saw Century of Birthing there told me “afterwards I ran up to the director and shook his hand…partly because his film finished just in time for me to catch my train back to London, partly because it’s the best film of this century so far.” And you can’t say fairer than that. 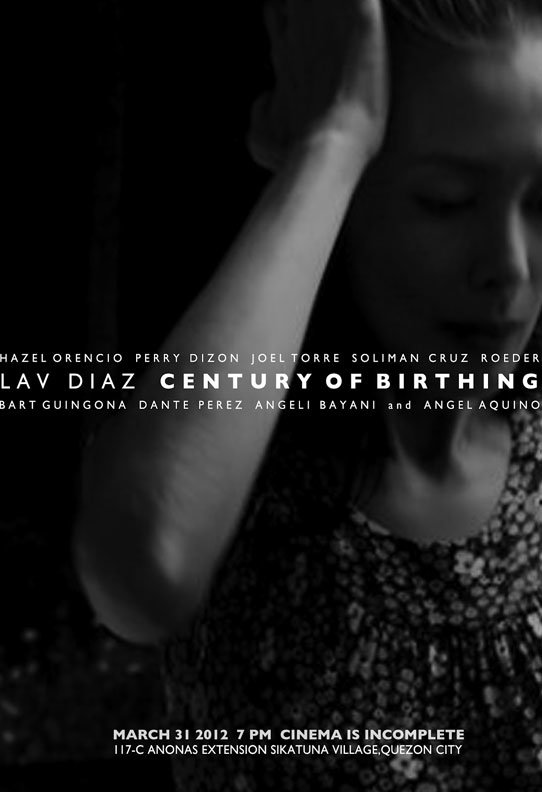 Thanks to Dodo Dayao and James Norton. Tickets for Lav Diaz at Exit Art are available here.

Movie Poster of the WeekLav Diazimages
7
Please login to add a new comment.