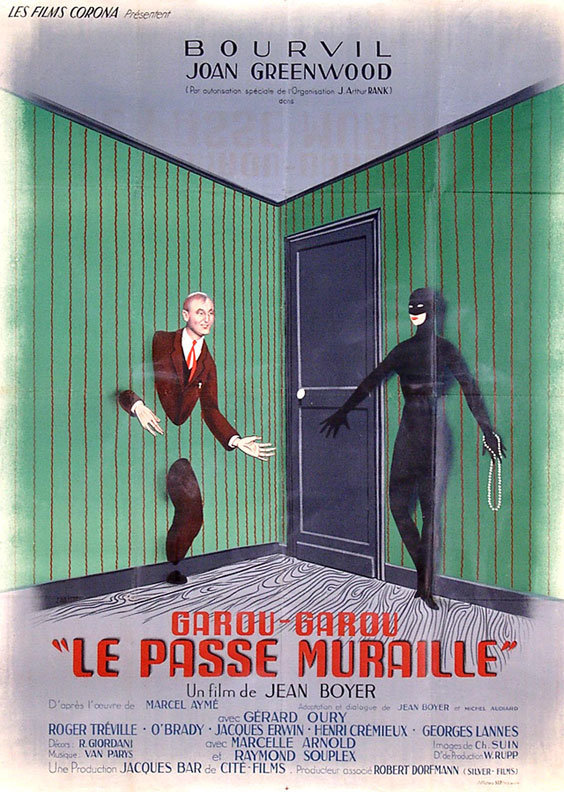 One of the pleasures of digging around for movie posters is coming across great designs for films that have otherwise been forgotten, that have not become part of the pantheon—or even any of its foothills—but which nevertheless are fascinating reminders of areas of cinema history that are usually ignored. The other day I posted a lovely Russian poster on Movie Poster of the Day for an adaptation of Dostoyevsky’s White Nights that I wasn’t familiar with but which, I then discovered, was directed by a man described as “the high priest of Stalinist Cinema.” You can read more about that here﻿.

When this terrific poster for Le passe-muraille caught my eye I knew absolutely nothing about the film, and, with the exception of English actress Joan Greenwood (Kind Hearts and Coronets), nearly every name on the poster, from star Bourvil to director Jean Boyer to author Marcel Aymé, was unknown to me. What attracted me was the unusual design, with its nod to Irma Vep, and so I had to find out more. The result is a story about a forgotten piece of popular cinema that nonetheless touches on some major players.

Le passe-muraille (alternatively known as Garou-Garou, le passe-muraille) is best translated as The Walker-Through Walls (though the English language title for the film is Mr. Peek-a-Boo). Directed by Jean Boyer in 1951, the film was adapted from a 1943 story by Marcel Aymé (1902-1967), a canonical French novelist, children’s book author and screenwriter. 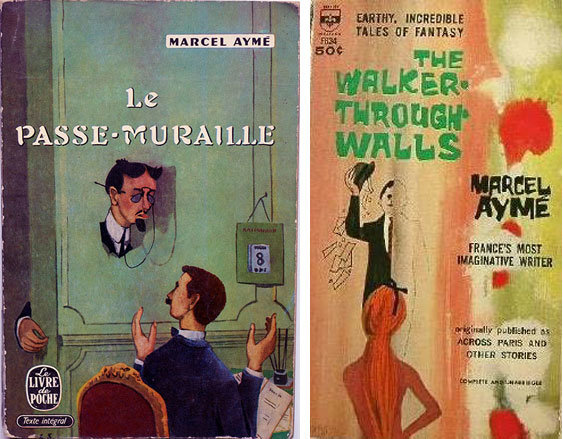 Aymé is so well known in France that a much-photographed statue of him in front of his former home in Montmartre pays hommage to his most famous story. Amazingly, the sculpture was created in 1989 by none other than Jean Marais (1913-1998), the dashing star of Cocteau’s La belle et la bête﻿ and Ophée (and thus no stranger to crossing through dimensions himself).﻿

The story of Le passe-muraille is that of a mild-mannered civil servant, Leon Dutilleul, who discovers that he has the ability to walk through walls. He falls in love with an English cat burglar (Greenwood), dressed like Musidora in Les vampires (see below) and attempts to make her go straight by disguising himself as a master criminal named “Garou-Garou.” The film by all accounts is a trifle, played for laughs (the American poster quotes Walter Winchell damning it with faint praise as “a feathery frolic up to its dimples in whimsey!”), but was apparently popular in its time and a staple of French TV. ﻿(You can watch the opening ten minutes, unsubtitled but you’ll get the idea, here. If you’re impatient you can see him first walk through a wall around the 7 minute mark). 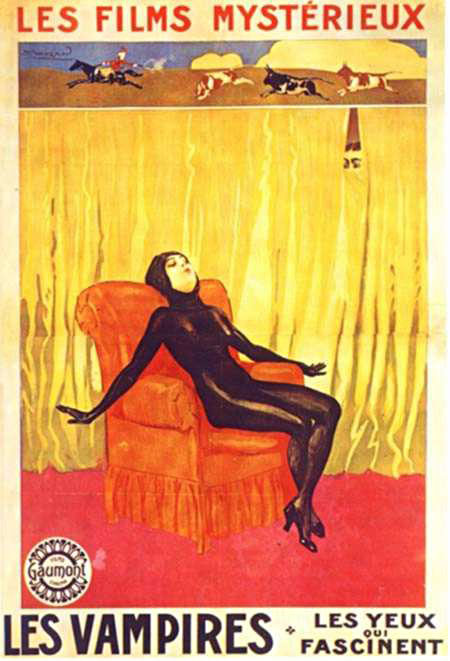 The poster for Le passe-muraille ﻿ was designed by one Félix Labisse who was a surrealist painter of note. (The Irma Vep touch is fitting since Feuillade’s 1915 crime serial Les vampires was much loved by the Surrealists.) Born in France in 1905, Labisse had moved to Belgium as a teenager and became a protegee of the painter James Ensor and friend of the filmmaker Henri Storck. In 1928 he and Storck founded a Cinema Club in Ostend which showed avant-garde films by Man Ray and early films of Dreyer and Lang. He even made a film of his own, entitled La mort de vénus.

In 1947, a few years before designing this poster, Labisse was himself was the subject of a short film entitled Visite à Félix Labisse, made by none other than a 25-year-old Alain Resnais. As far as I can tell, outside of Le passe-muraille, Labisse designed no other film posters, but you can see many of his paintings, dating from 1926 through to 1981, here. Of particular interest are this 1941 self-portrait, and this 1947 portrait of Jean Louis Barrault, though most of Labisse’s work is dominated by Dalí﻿-esque landscapes and oddly hued nudes.

Labisse did also draw a second, equally arresting, poster for the film which gives us a view of Mr. Peek-a-Boo from the other side of the wall, which is now used as the cover of a collection of Aymé’s stories. 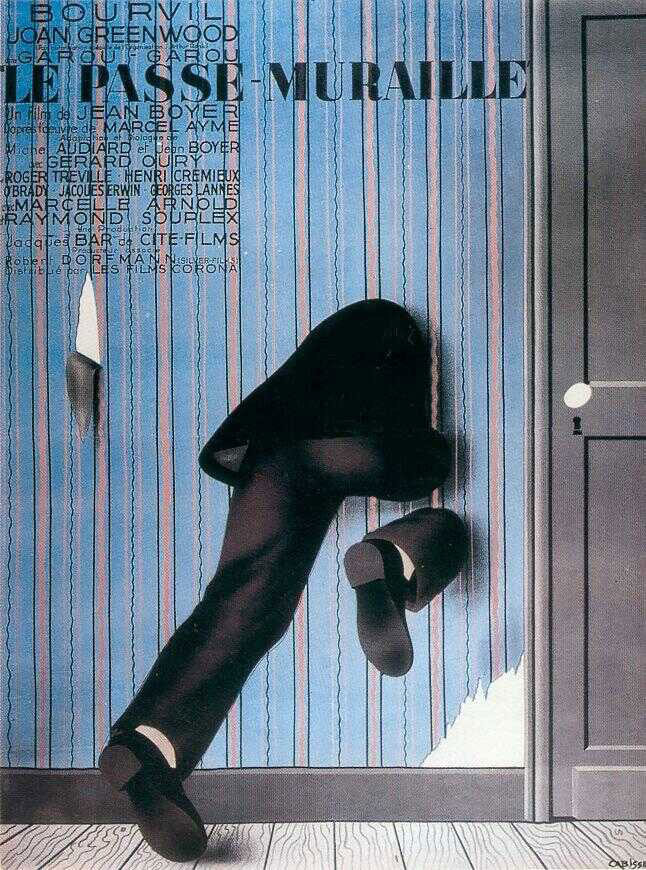 The star of the film, Bourvil (1917-1970), was, apparently, a huge comedy star in France. He starred most famously in the 1966 film La grande vadrouille, a.k.a. Don’t Look Now, We’re Being Shot At!, which may, like Le passe-muraille, not ring any bells over here, but which, for over forty years, was the most successful French film in France with over 17 million cinema admissions. Not until Titanic in 1997 did a film of any nationality beat that record, and not until Bienvenue chez les Ch’tis in 2008 (again, no bells?) did any French film surpass it.  La grande vadrouille was directed by Gérard Oury, who acted with Bourvil in, you guessed it, Le passe-muraille.

There is a more conventional French poster for the film that highlights Bourvil but plays it as more of a romance. 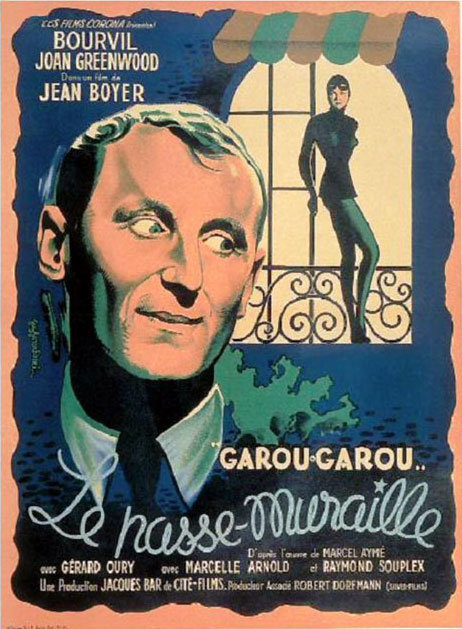 But the international posters for the film play it as an all-out comedy. (The American poster declares “One Peek is worth a thousand laughs!” but also has one of the most groan-worthy taglines I’ve ever read: He’s a “Funny” – she’s a “Honey” and they’re in love with other people’s money!). 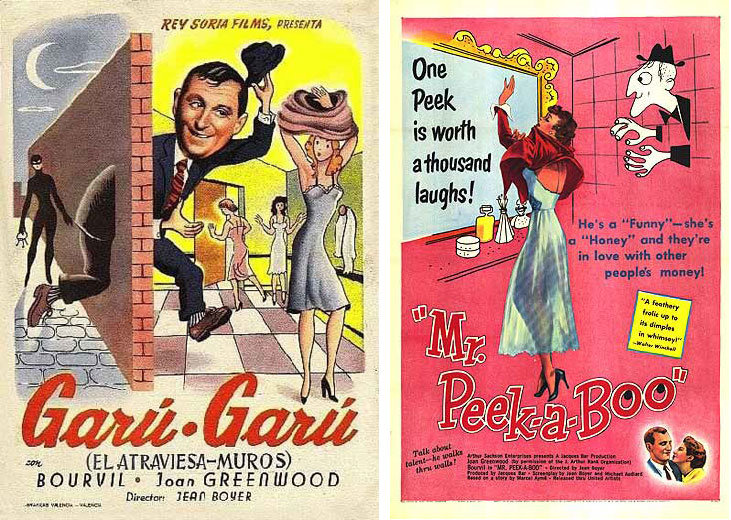 As for Jean Boyer, the director of La passe-muraille﻿, he made an impressive 62 films in the 34 years between 1931 and 1964, many of them starring Fernandel, and none of which seem to be well known outside France. Although, a year after Le passe-muraille he did co-direct a 22-year-old Audrey Hepburn in the film that led to her discovery, Monte Carlo Baby.

One final cinephilic connection to this film: in 1996 the great composer Michel Legrand (The Umbrellas of Cherbourg) wrote a musical based on the story which played in Paris and was renamed Amour for its brief, poorly reviewd but Tony-nominated 2002 Broadway run.

Many thanks to Dominique Besson for the poster and to Clemence Taillandier for help with French pop culture.