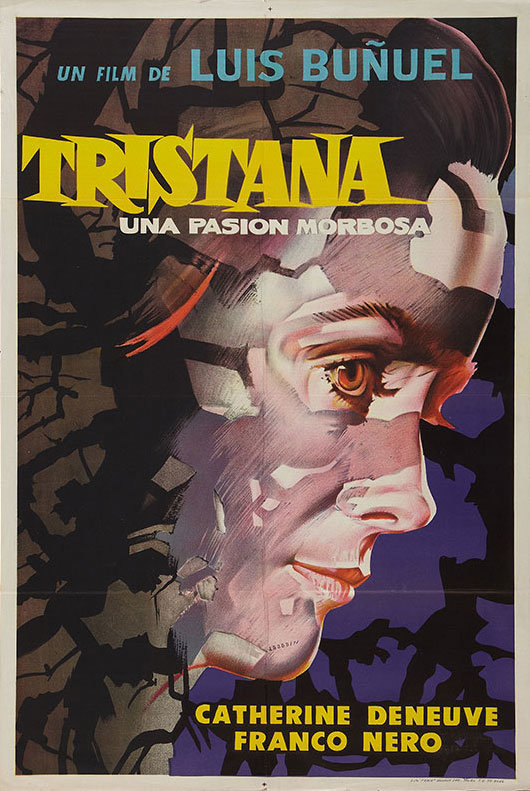 Luis Buñuel’s 1970 masterpiece Tristana (which closed the 8th New York Film Festival) is being re-released in New York today, at the Lincoln Plaza Cinemas, with little fanfare. But it gives me an excuse not only to show the many varied international posters for the film, but to also to display two fascinating pieces of ephemera.

The first is this photograph, below, which blew my mind when I saw it in the Telegraph magazine in the UK this summer. A slightly different version appears in Buñuel’s autobiography My Last Sigh, where he tells the story behind it (his longtime collaborator Jean-Claude Carrière﻿—“I am the only one from this picture still alive”—gave his own account in the Telegraph). Two years after Tristana, the 72-year-old director was in Los Angeles to present his next film, The Discreet Charm of the Bourgeoisie, at the L.A. Film Festival, and George Cukor, whom he had never met before, invited him to a lunch in his honor with “a few old friends” at his home in Bel Air. Until they arrived, Buñuel and Carrière had no idea that the guests would include the pantheon of Hollywood filmmaking. Carrière himself had the good sense to call up a photographer and document the gathering, which included (clockwise from top left) Robert Mulligan (Buñuel describes him as “a young director named Robert Mulligan” though he would have been 47 at the time), William Wyler, George Cukor, Robert Wise, Carrière, Buñuel’s producer Serge Silberman, Rouben Mamoulian﻿, Alfred Hitchcock﻿, Buñuel﻿, George Stevens﻿ and Billy Wilder. And if that wasn’t enough, the space between Carrière and Silberman was left to represent John Ford, who had been at the lunch (Buñuel writes “we were the first to arrive at Cukor’s magnificent house, followed close behind by a large, muscular black man half-carrying an elderly gentleman with a patch over one eye. To my surprise, it was John Ford”) but didn’t stay long because of illness (he died the following year). What we wouldn’t all give to be at that lunch. 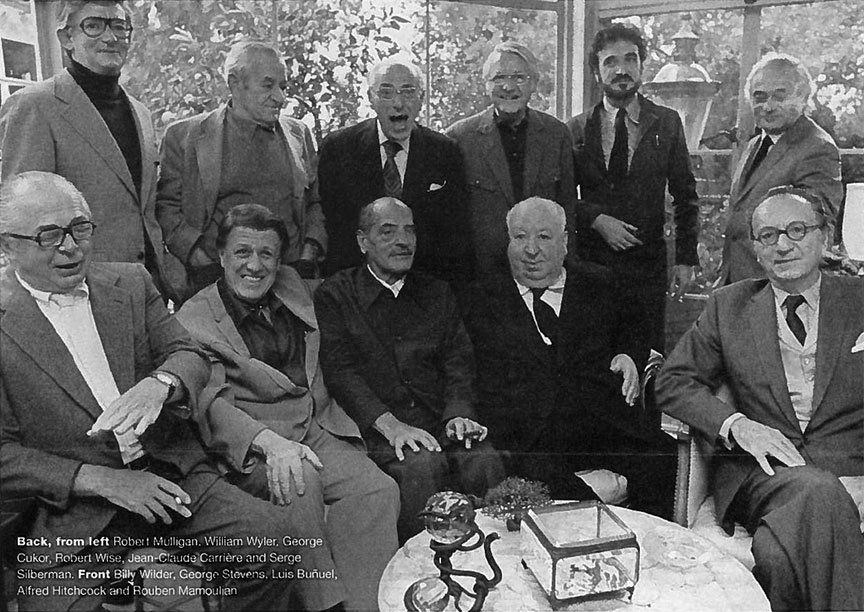 The Discreet Charm of the Bourgeoisie won the Best Foreign Film Oscar the following spring (Buñuel﻿ accepted the award disguised as Serge Silberman). Tristana had in fact been nominated two years earlier but had lost to Elio Petri’s Investigation of a Citizen Above Suspicion. Which means that the following poster, which touts Tristana as the winner of the Academy Award, ﻿must have been printed﻿ prematurely and optimistically. The poster also says that the film was released by sexploitation distributor Cambist Films, but according to IMDb and the alternative US poster below, it was actually distributed by Maron Films. Curiouser and curiouser. 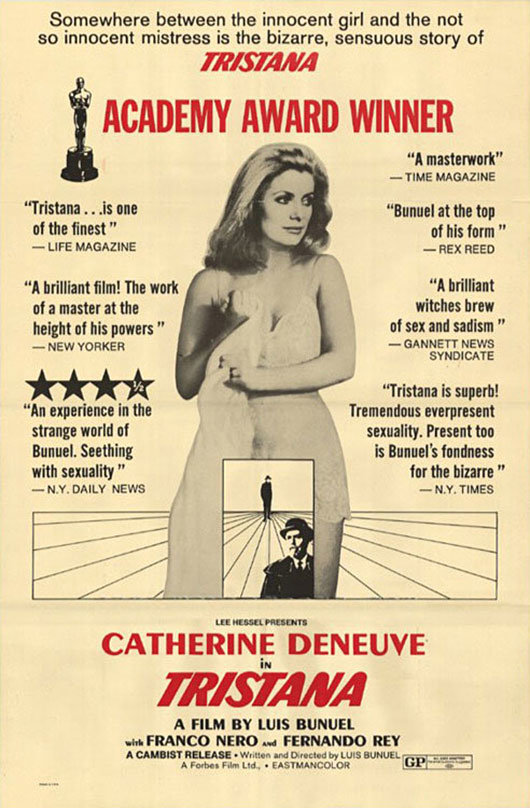 The poster at the top of the page is from Argentina and what follows are thirteen more designs from ten different territories. 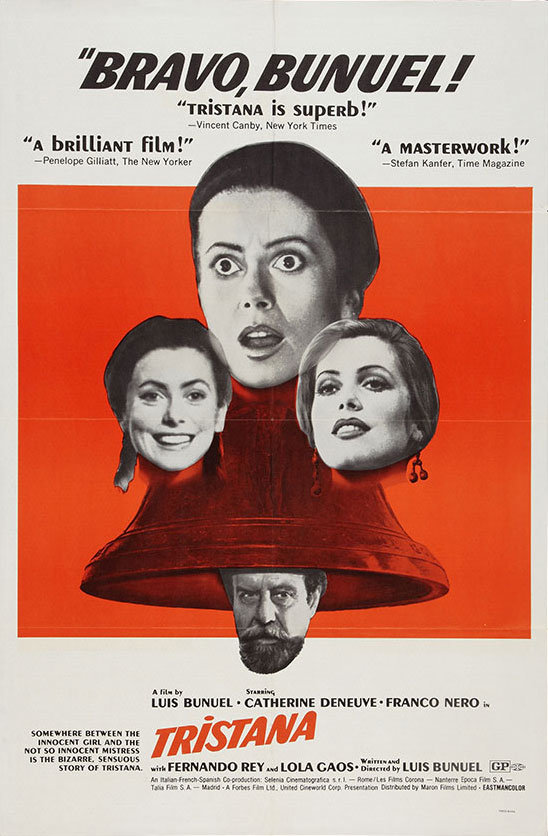 Above: the US one sheet. 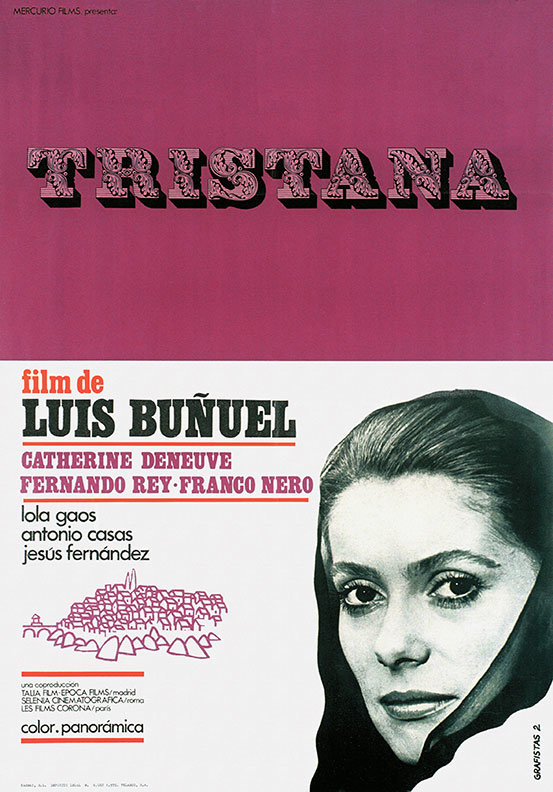 Above: ﻿the Spanish poster. 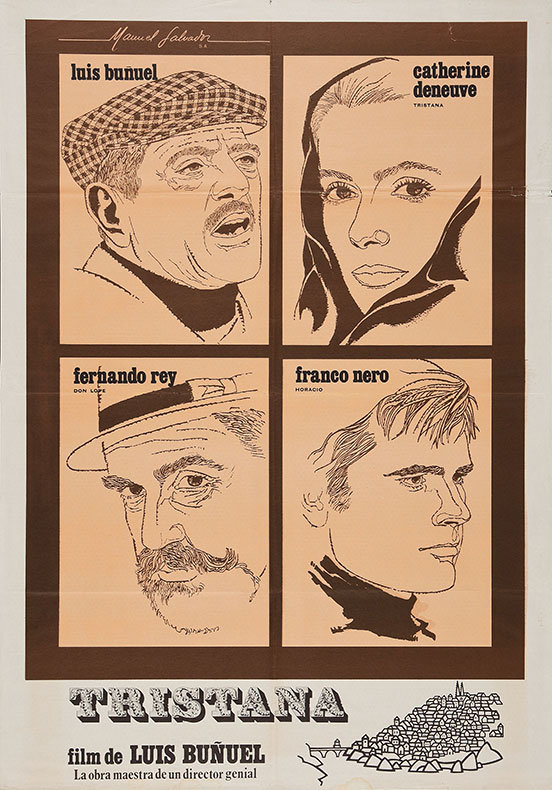 Above: ﻿an alternative Spanish design. 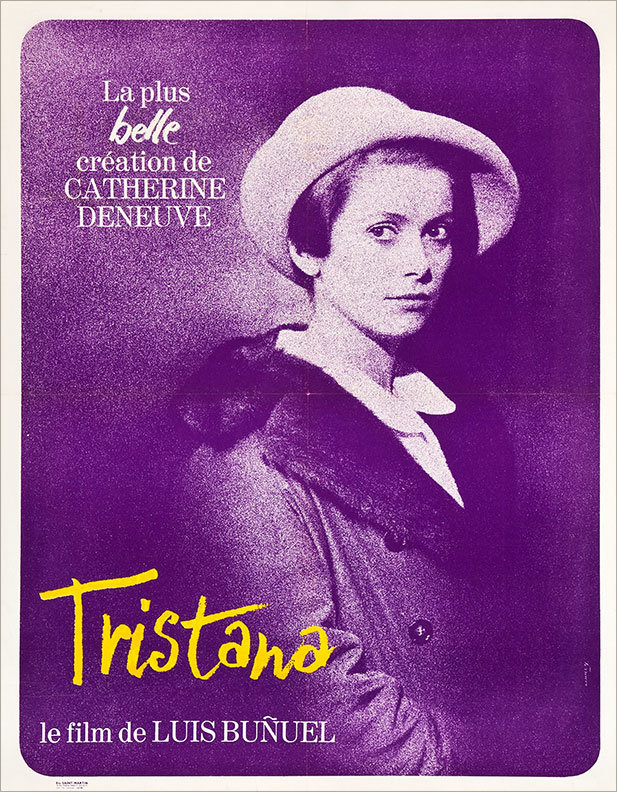 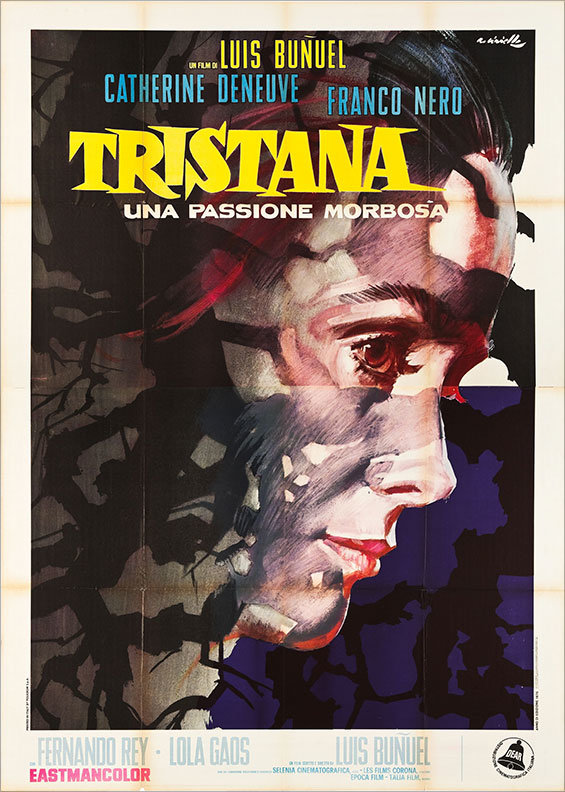 Above: the Italian 4-foglio by Averardo Ciriello, the basis for the Argentinian poster. 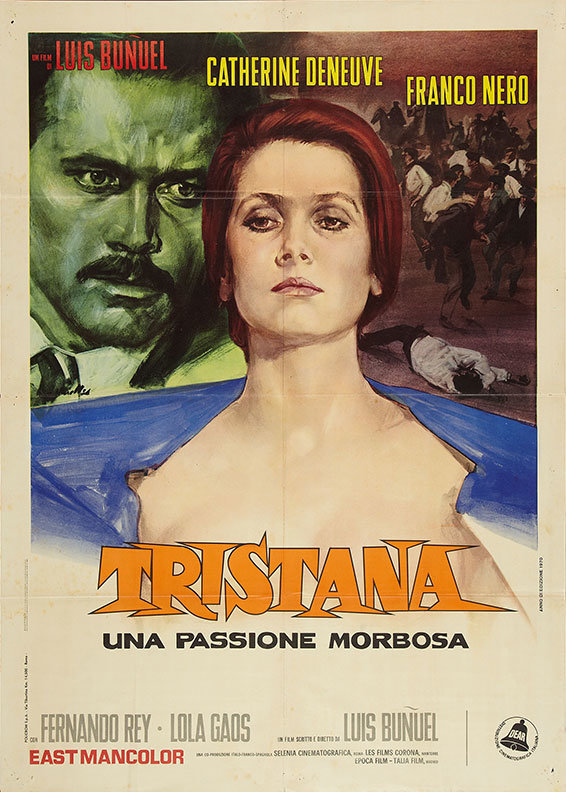 Above: ﻿the Italian 2-foglio. 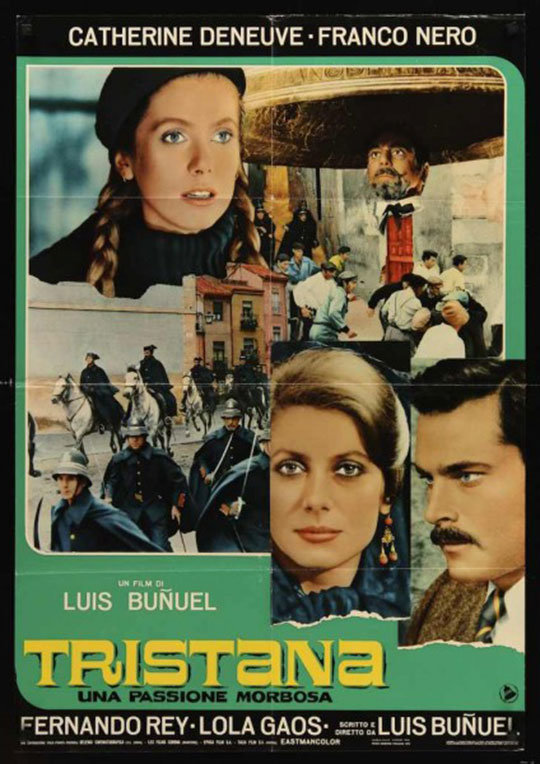 Above: ﻿the Italian 1-foglio. 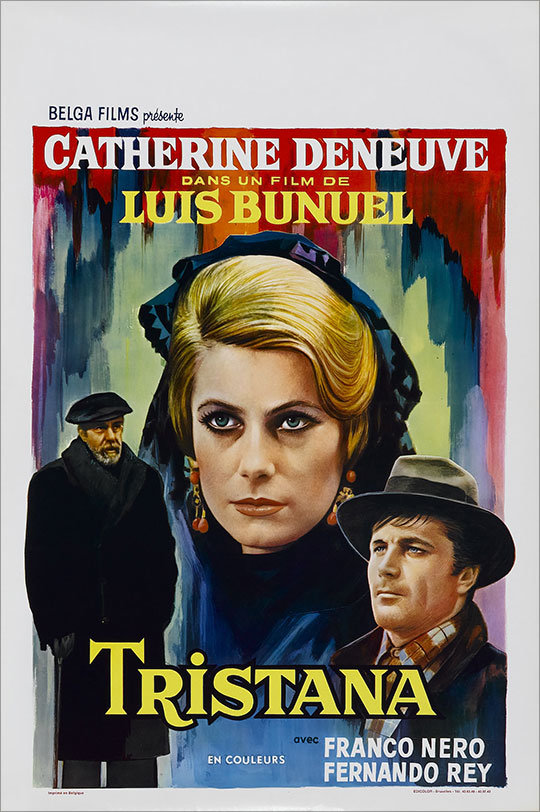 Above: ﻿the Belgian poster. 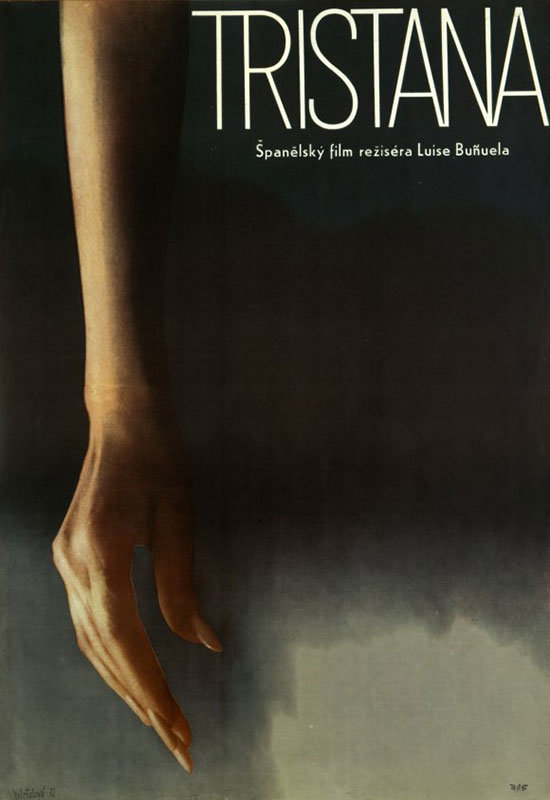 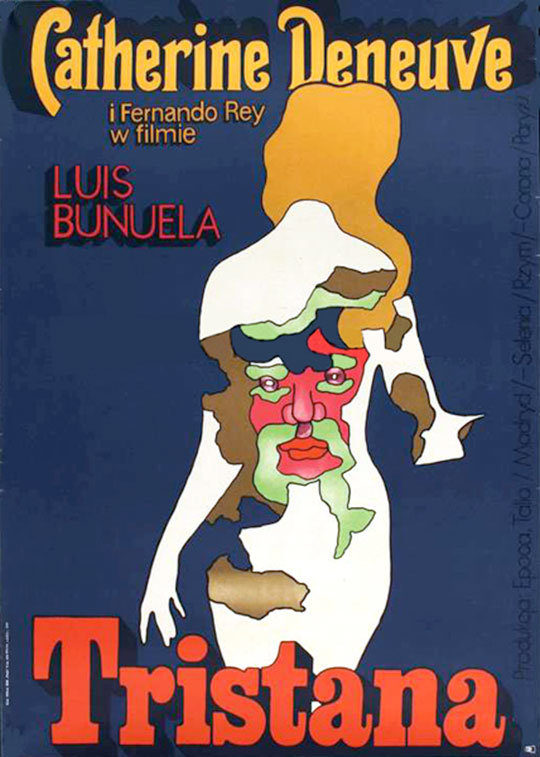 Above: ﻿the Polish poster by Maciej Zbikowski.

Above: ﻿the Cuban poster by Jorge Dimas González Linares (b. 1948). 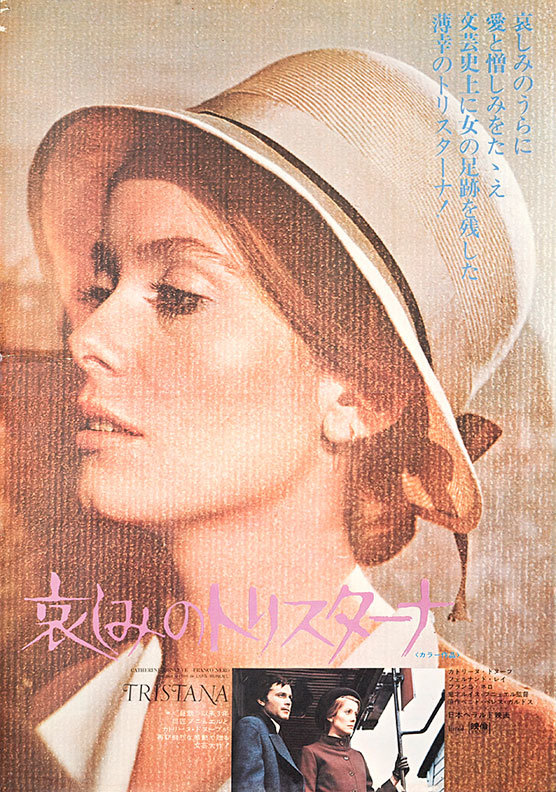 Above: the Japanese poster. 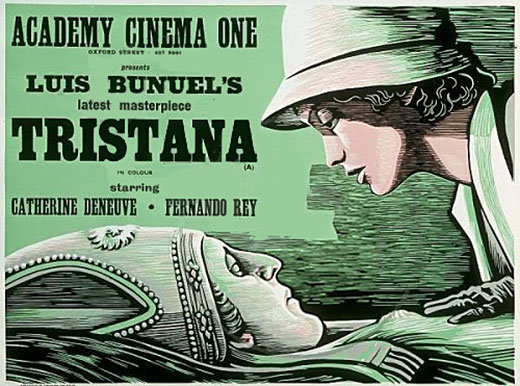