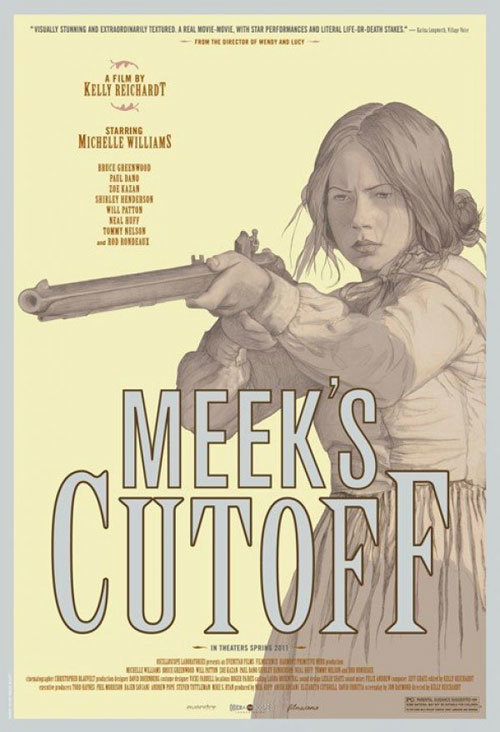 This is not your father's Western. One of the things I like about the poster for Kelly Reichardt’s new film, Meek’s Cutoff, is that it isn't quite what you'd expect and it lets you know that the film is going to be similarly unique. It took me a while to come around to it. Though I liked the illustration—and I always feel that there isn't enough illustration in contemporary movie posters—I wasn't immediately sold on the typography: I think I wanted something more traditionally Western perhaps, something with a weathered woodcut feel, something more obvious. The "Cutoff" and much of the other type looked right, but that sans serif "Meek's" bothered me. The UK version of the poster is nicely done (weathered woodcut type and all), and might sell more tickets, but it is also much more conventional. It doesn't tell you that Meek's Cutoff is anything other than a Lonesome Dove-style period recreation.

It was when I discovered that Oscilloscope’s US poster was designed by Marlene McCarty, someone whose work I have been interested in a for a while, that I started to really pay attention. McCarty, whose work can also currently be seen in the elegant fan-like opening titles of Todd Haynes’s Mildred Pierce, is an artist and designer who was part of the activist art collective Gran Fury in the late 80s and early 90s. Gran Fury produced many of the most iconic and effective protest images of the era: the neon “Silence=Death” sign, and the billboards proclaiming “Kissing Doesn't Kill: Greed and Indifference Do.” As a co-founder of the design studio Bureau in the 90s she and Donald Moffett also designed gorgeous posters for ground-breaking indie movies like Tom Kalin’s Swoon and Jennifer Montgomery’s Art for Teachers of Children. 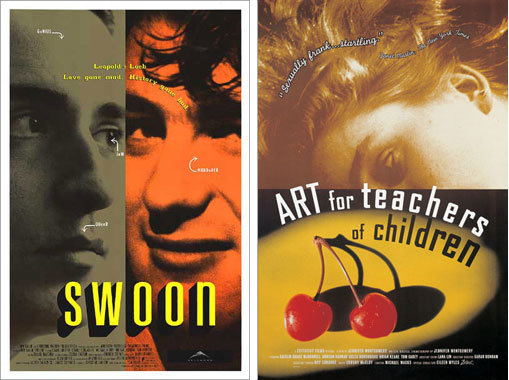 In recent years, McCarty, who has always been a fine artist as well as a graphic designer (she had a New York retrospective at the end of last year, entitled “I'm into you now: some work from 1980-2010”), has become best known for her large-scale realistic drawings, in pencil and ballpoint pen, of  matricidal teenage girls, or chimpanzees interacting with humans, some of which can be seen here. McCarty's portrait of a rifle-toting Michelle Williams in Meek's Cutoff, though not quite as provocative (no exposed nipples for one thing), is very much in this style, though drawn entirely in pencil (“then futzed with a little bit in Photoshop for color” she told me).

It was Kelly Reichardt who requested that McCarty design the poster for Meek’s (she also designed the film titles). McCarty says she doesn't design many film posters "because the studios have such preconceived ideas about what they want — they don't need me to execute them.” But she does have strong ties to the independent film world: her partner is Christine Vachon, one of the most successful indie producers of the past two decades. (Kelly Reichardt, in fact, was an assistant and an extra, twenty years ago, on one of Vachon’s first major productions: Todd Haynes' Poison.)

In the spirit of Marlene and Kelly and Christine and Michelle, I thought I'd round things up with a few other Western posters of strong frontier women and their firearms. Meek's Cutoff opens in theaters today and I can't wait to see it.