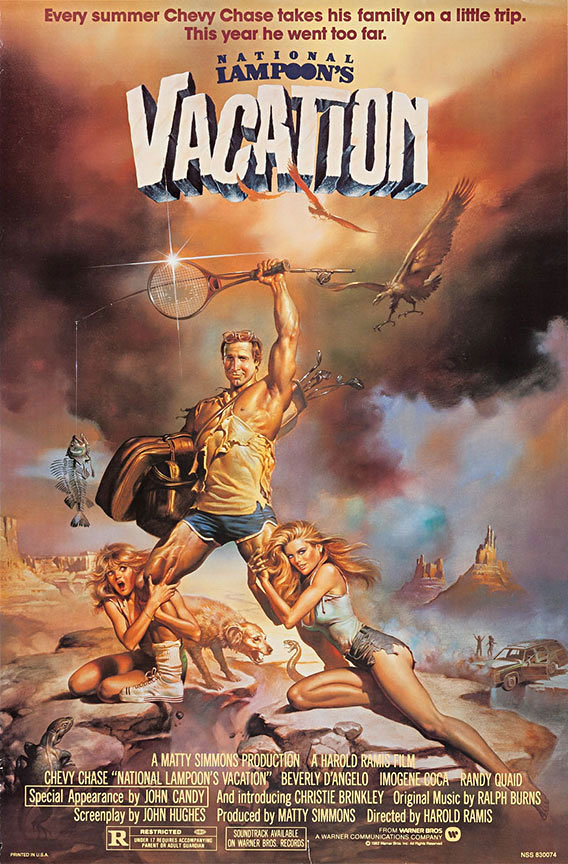 When Harold Ramis died last week I looked for a poster to memorialize him. It wasn’t easy: Ramis was a director of American comedies, and American comedies, especially from the 1980s onwards, tend not to have the most visually arresting posters. But then I came across the poster for National Lampoon’s Vacation, a poster I had seen before but not paid a lot of attention to because its hyper-realist, exaggerated comic book style wasn’t really my cup of tea. But looking at it years later I can appreciate it as one of the last hurrahs of movie poster illustration as well as a witty parody of heroic iconography in the service of broad comedy.

The poster is the work of Boris Vallejo. Born in Peru in 1941—he came to the States at the age of 23—Vallejo is a renowned fantasy and science-fiction illustrator known for his muscle-bound heroes, voluptuous heroines and imaginative monsters. He is a meticulous realist who works mostly in oils and whose attention to the gleam and definition of a well-toned body is quite remarkable. Whoever had the bright idea to hire him to illustrate Vacation was clearly thinking outside of the box. And it obviously worked because Vallejo was commissioned to produce a sequel to his own poster for the Amy Heckerling-directed follow-up, European Vacation (in which Chevy Chase seems to have put in even more hours at the gym). 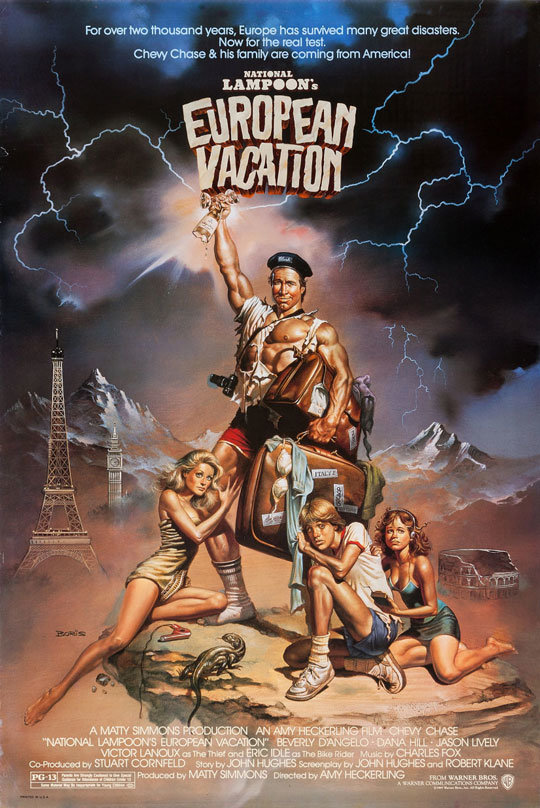 Vallejo got his start illustrating comic books and fantasy novels. His first movie poster commission, as far as I can tell, was for the 1977 re-release of Barbarella in which you can already see the blueprint for the Vacation posters. (It is interesting to see how it differs from the original 1968 poster.) 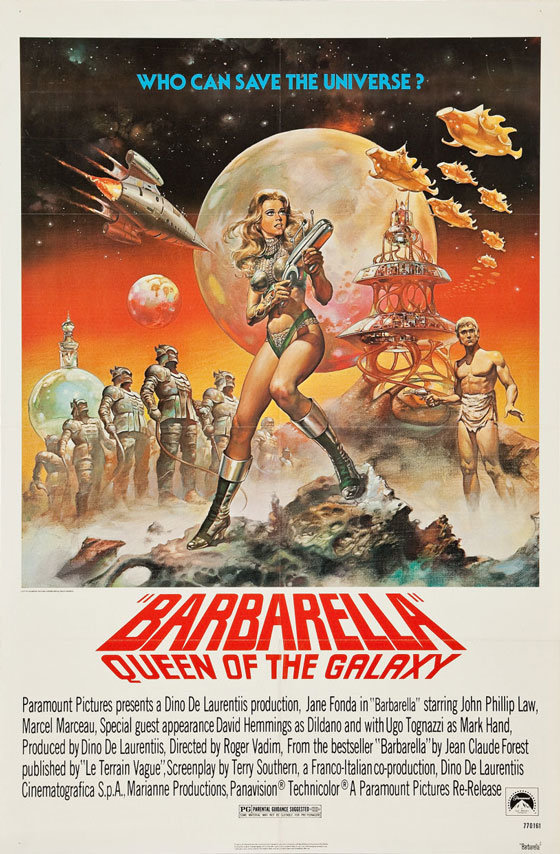 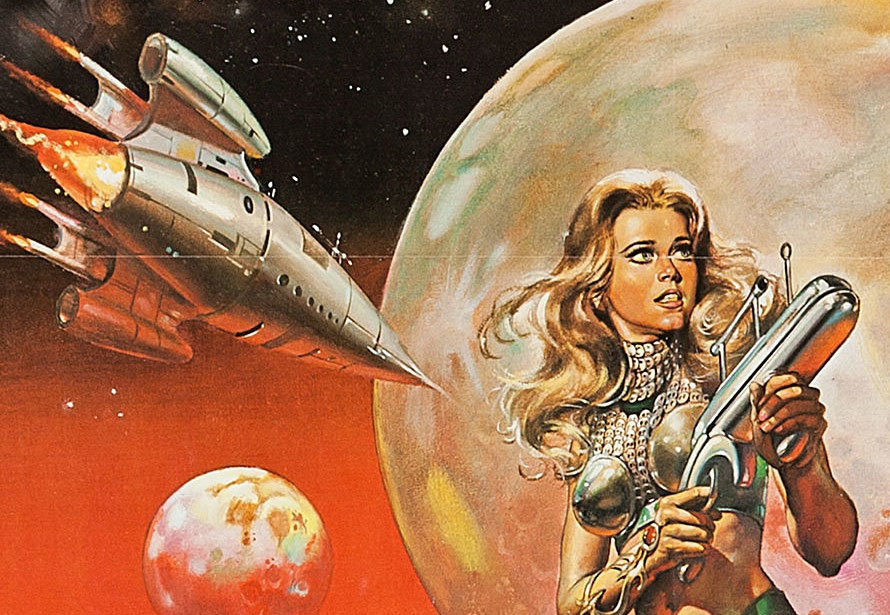 In 1977 he also illustrated the poster for J. Lee ﻿Thompson’s The White Buffalo—billed on IMDb as “a strange western version of Jaws”—his first movie monster. 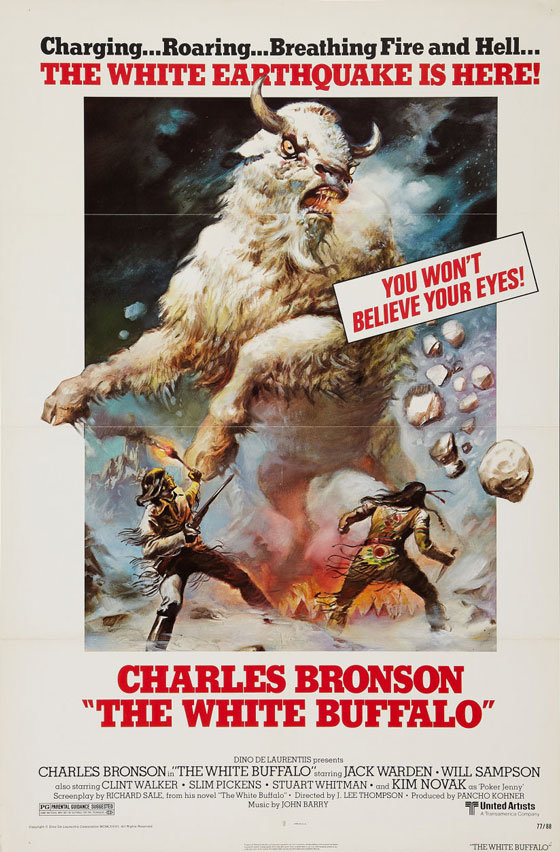 In 1980 he was commissioned to paint a number of promotional posters for The Empire Strikes Back (used as giveaways by Coca-Cola, not for the theatrical release). Again, the genesis of Chevy Chase’s heroic pose can be seen in his Luke Skywalker painting, albeit with a lightsaber instead of a tennis racquet and R2D2 in place of Christie Brinkley. These are the first of his movie posters to be signed “Boris.” 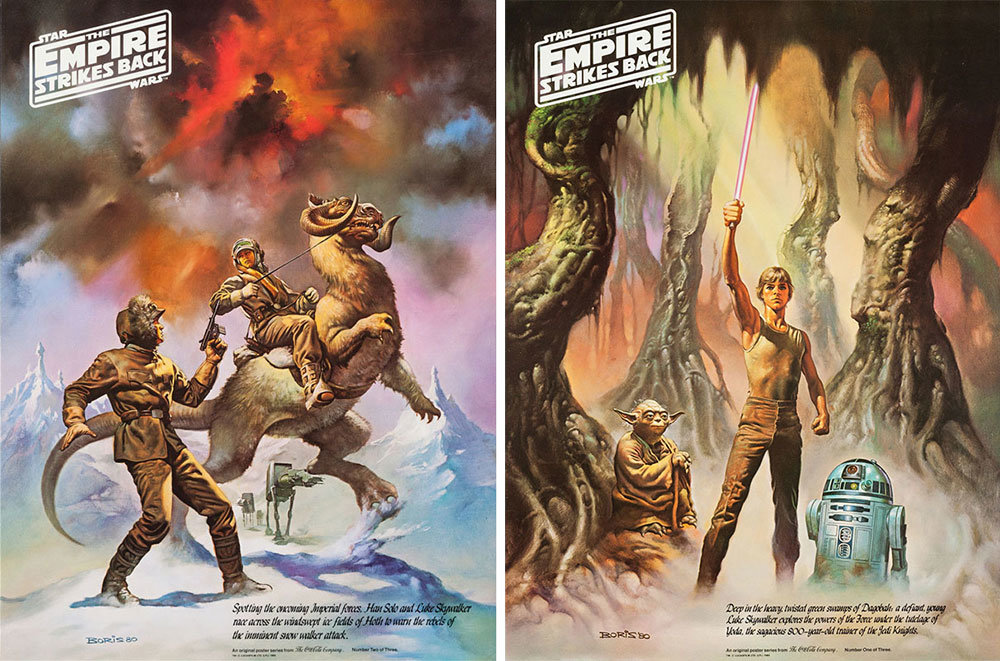 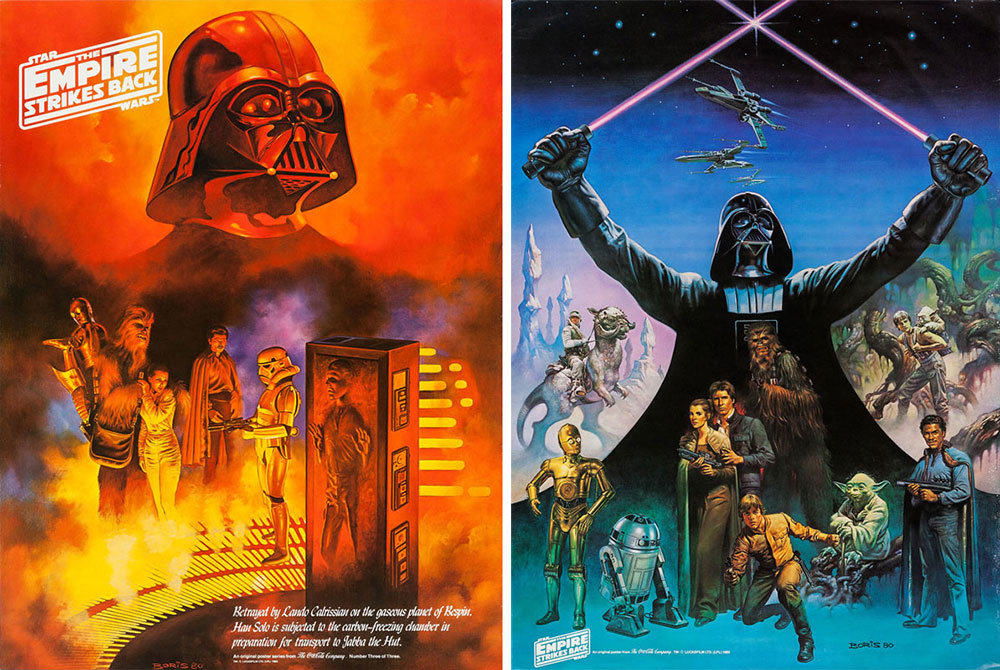 In 1981 he painted Ed Harris as a jousting biker for George Romero’s uncharacteristic drama about a troupe of medieval reenactors﻿. 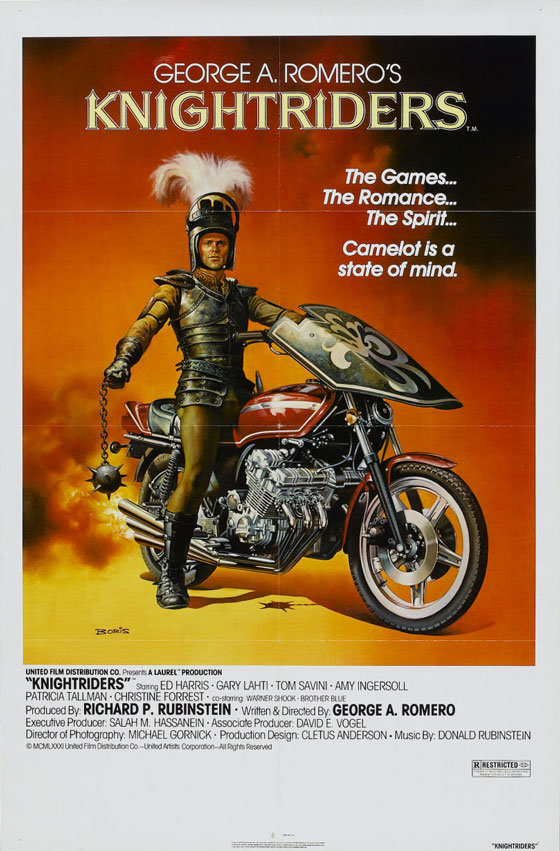 And in 1982 he painted perhaps my favorite of all his posters, for Larry Cohen’s Q – The Winged Serpent. 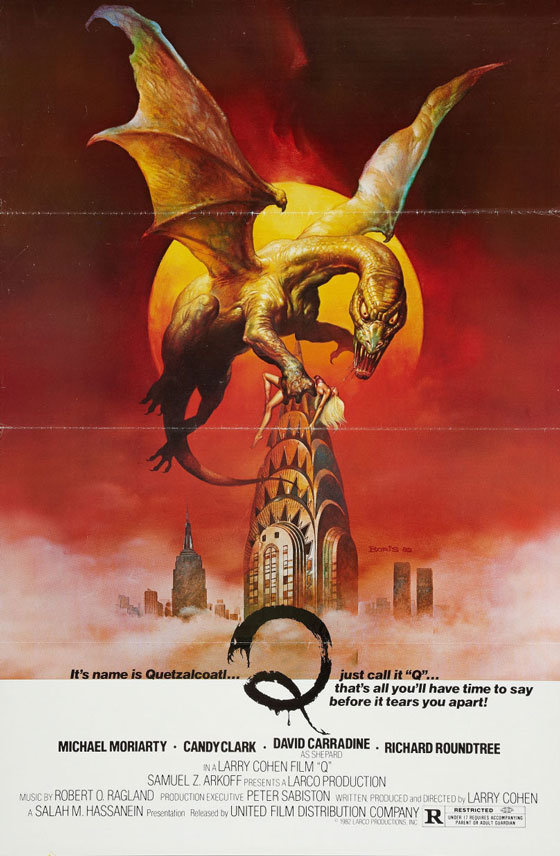 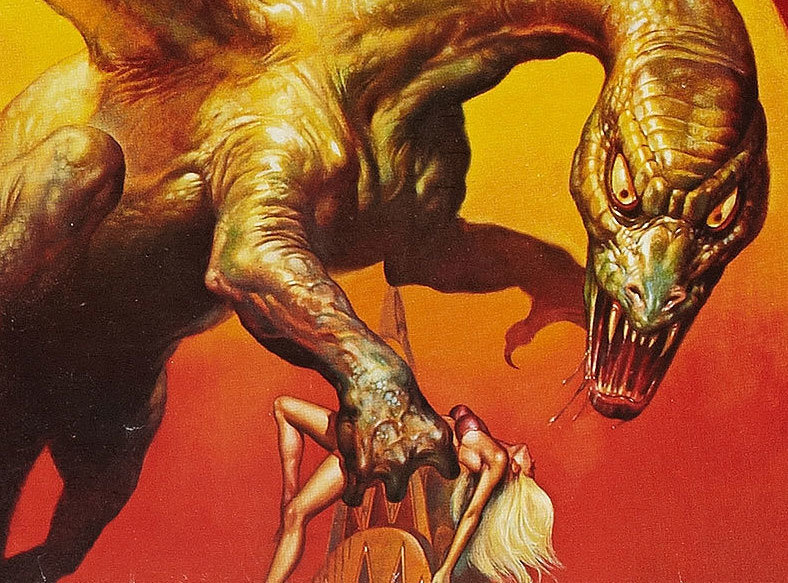 In the mid-80s, while also doing the Vacation posters, Vallejo was the go-to guy for Roger Corman’s exploitation-fantasy films like Deathstalker and Barbarian Queen. 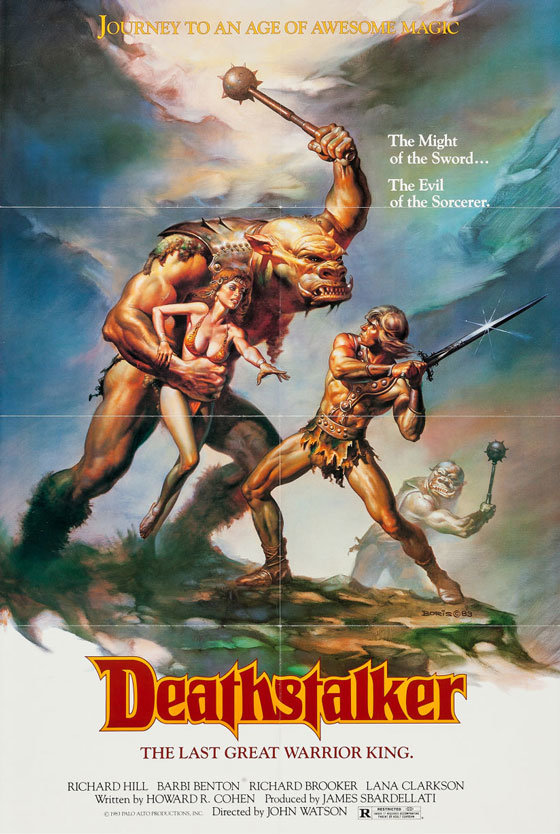 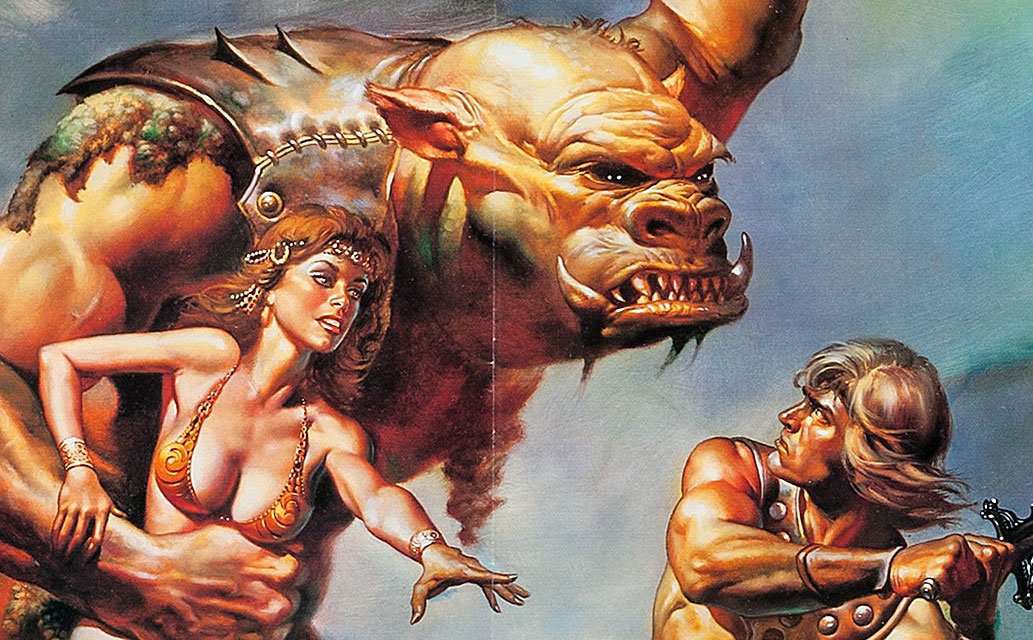 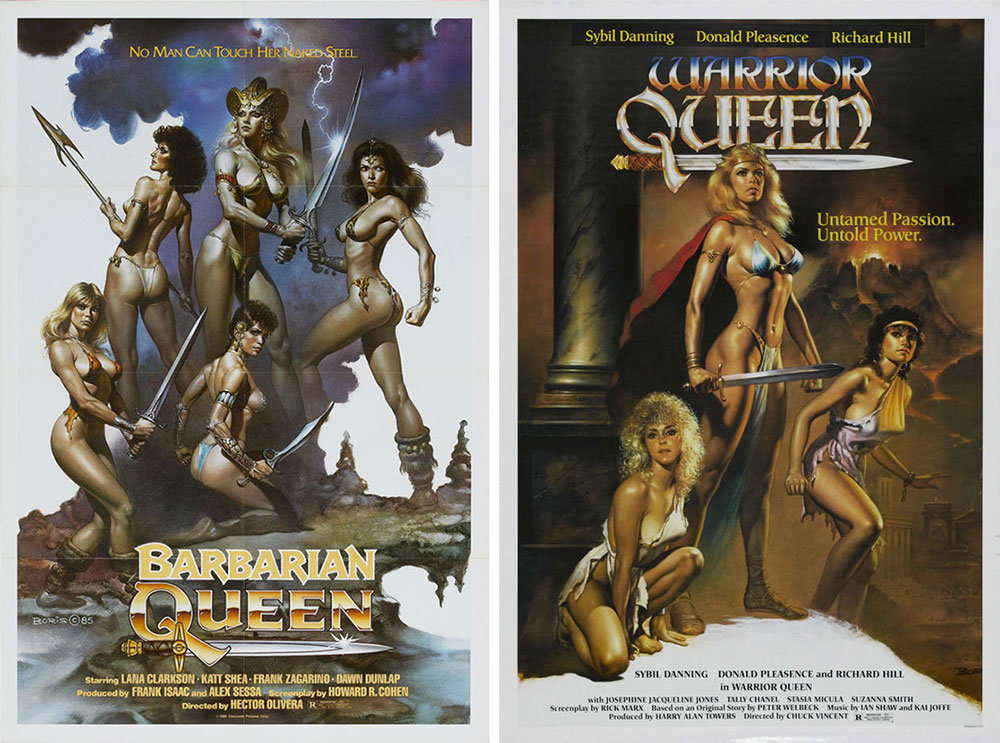 After that the trail goes cold for twenty years, as far as his movie posters are concerned (though he continued to produce some video covers for Corman). Vallejo married fellow fantasy artist Julie Bell in 1994 and they have remained prolific and popular in the field of fantasy erotica. They have authored a number of books and an annual calendar, but as far as I know had not painted any other movie posters until they joined forces in 2007 and 2010 on two cult comedies: Aqua Teen Hunger Force Colon Movie Film for Theaters and Rubber. 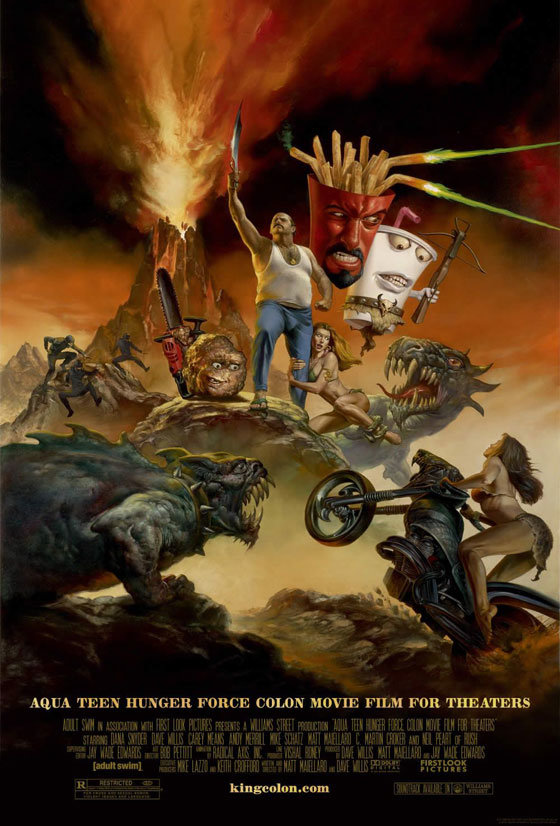 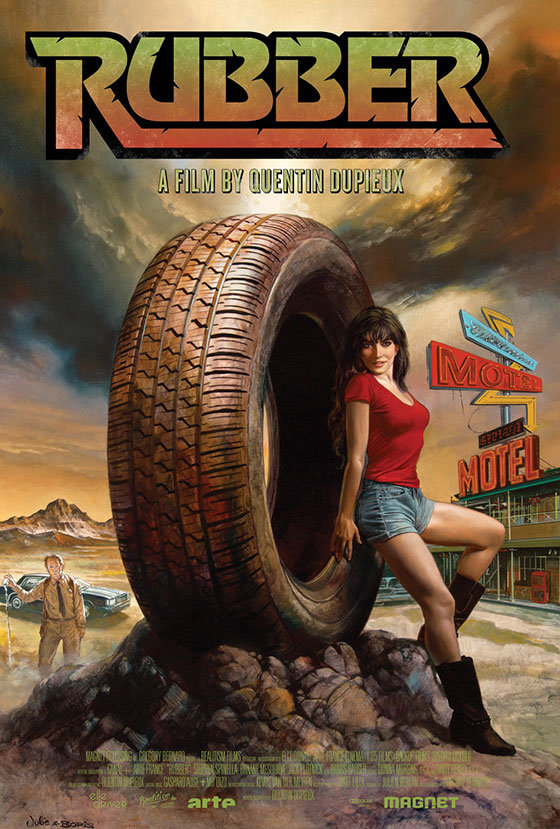 Vallejo is now 73 and still going strong. You can see more of his and Bell’s work on their website.