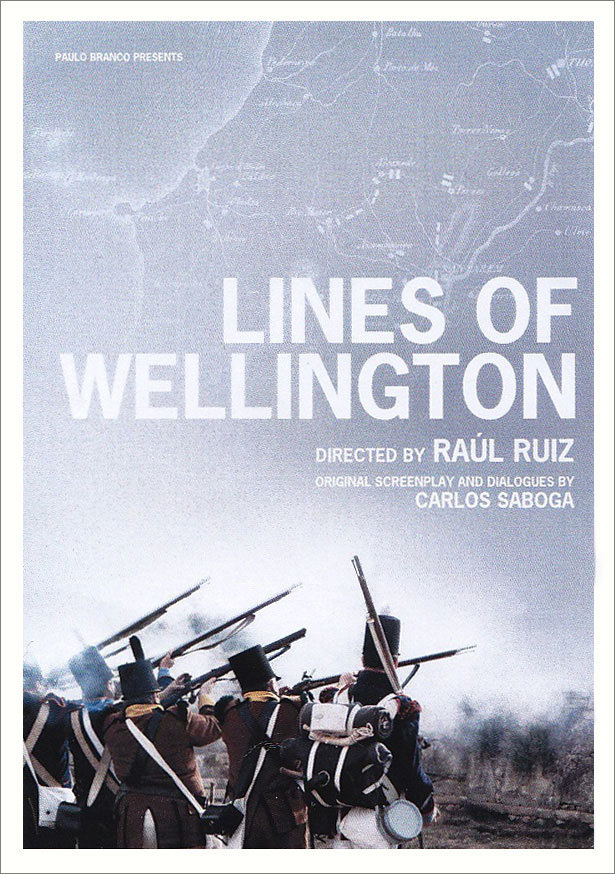 I had intended to post a different Movie Poster of the Week this morning when I heard the sad news about the passing of the great Raúl Ruiz. This poster may be the saddest memento of all, since it is for a film that will now never be made. Announced in Cannes this spring, the epic Napoleonic-era Lines of Wellington was to have been produced by Paulo Branco’s Alfama Films and was being pitched as “War and Peace in Portugal.” Scripted by Carlos Saboga, who also adapted Mysteries of Lisbon, the film, based on the memoirs of some of Napoleon’s generals, was to chronicle the defeat of Napoleon’s troops during the third French invasion of Portugal in 1810-11. The poster, which I discovered on the website Le Cinema de Raúl Ruiz, is a pre-release teaser which may never even have been printed (though perhaps it was hanging in the Alfama Films booth in Cannes). Since the film hadn’t been cast when it was designed it stands out in its elegant simplicity from the star-centric, floating-head﻿ posters (this one literally) ﻿﻿which usually publicized Ruiz’s films. Though rare was the poster which actually did Ruiz’s baroque visual imagination justice.

Also tentatively titled Débâcle, Lines of Wellington was planned as both a two-hour feature and a three-part TV series. Ruiz was to begin shooting this September. In A.O. Scott’s excellent profile in the New York Times magazine a few weeks ago, Ruiz hinted that the film would be much in the spirit of the Mysteries of Lisbon novelist Camilo Castelo Branco﻿. As C. Mason Wells wrote on Twitter this morning, it is “already one of the great unrealized projects of the cinema.”