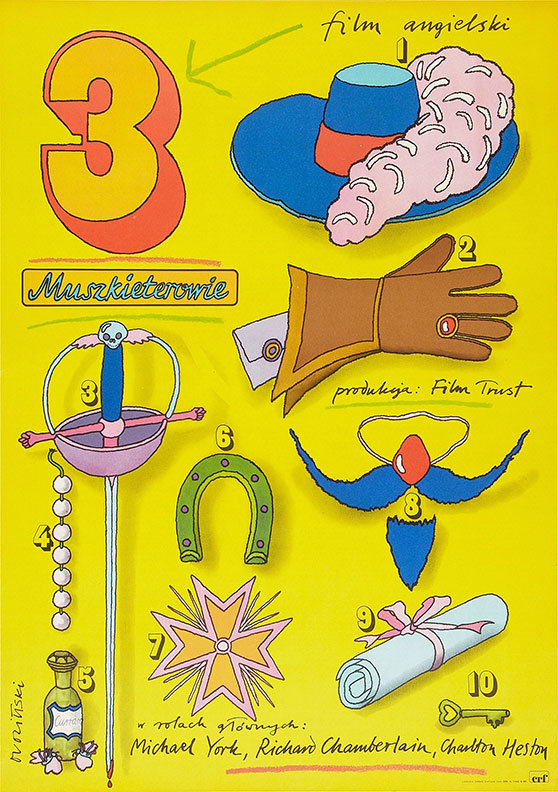 I came across this 1975 Polish poster for Richard Lester’s The Three Musketeers the other day and was struck by how contemporary it looks, seemingly playing off the aesthetic of Austin Radcliffe’s hugely influential Things Organized Neatly Tumblr. Things Organized Neatly curates photographs of, well, exactly what it says, and though it covers a broad field, the overriding look is a flat arrangement of objects as if on a table photographed from directly above, like these collections of video game ephemera or men’s fall accessories or things that are blue . The idea plays off old technical illustrations like this 19th century print of surgical instruments.

Often TON features disassemblies in which things are broken down into their composite parts and carefully arranged—like this motorcycle or this inkjet printer—which is really what this poster is doing: distilling Richard Lester’s all-star swashbuckling romp into its salient inanimate objects.

The second best thing about this poster is that, like the film itself, it has a sequel: 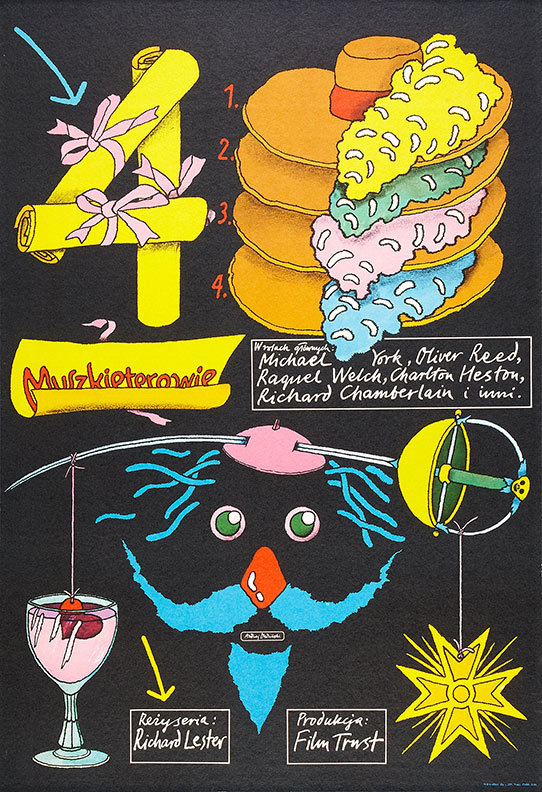 The Three Musketeers was originally conceived as a single four-hour film (in fact it was originally conceived in the 1960s as a vehicle for the Beatles) but was broken down in post production into two separate films. The actors, who had been paid for only one film, famously sued the producer Alexander Salkind resulting in what is now known as “the Salkind Clause” in all Screen Actors Guild contracts, stipulating that if you are hired for one film that film cannot be broken (or disassembled) into two .

The posters were designed and illustrated by Polish artist Andrzej Dudzinski, who was born in 1945 and who moved to the States just a few years after these were made, after having being invited to the International Design Conference in Aspen in 1977. He settled in New York where, in the 1980s, he worked as an illustrator for The New York Times, among other publications, and taught at Parson’s School of Design. He has since concentrated on fine art and photography.

I contacted Mr. Dudzinski by email and he replied “What a sweet surprise – you dug deep into my past to retrieve two of my favorite film posters (of which I haven’t done too many if you compare it with the oeuvre of some of my older colleagues such as Swierzy or Starowieyski).﻿”

Since it would have taken a couple of years for a Western film to reach Poland in the 1970s, I assumed that these two posters might have been created at the same time, but Dudzinski writes “Since they came a year apart, the commissions followed in the same order. I guess the client (Centrala Wynajmu Filmow – the sole distributor of foreign films in Poland) must have been happy with the first poster to ask me to do the sequel. As for the style, it reflects my visual preferences at the time: a sort of inventory of related (or not) objects and symbols. As you may see from my other work it was a passing fad but at the time reflected my desire to be in tune with what was happening in the West.﻿” Never more so than now, I might add.

He continues: “Here one must stress the unusual position artists enjoyed in the ‘People’s Republic of Poland’ - hence the international  appeal of the work produced by so called Polish Poster School and younger artists of my generation. We were given an enormous amount of artistic freedom, in stark contrast to the general lack of freedom in the countries of the Soviet bloc. As long as there was nothing threatening to the supremacy of the ruling Communist Party line, there was practically ﻿no interference into our work. Besides that the most important factor was probably the almost total absence of commercial pressure (!) I only fully understood this phenomenon working abroad (UK, Holland and France) and certainly in the US. For us it was a way to ignore the drab reality around. As film and theater posters were widely distributed and pasted all over it gave each one of us participating a chance to shine for a couple of weeks in the public arena.”﻿

“Perhaps this is an opportune moment to mourn the Polish film poster as we used to know it. Sadly it no longer adorns the streets of Polish cities (naturally less drab with the advancement of free market economy) having been pushed out by purely commercial blunt products of mass market merchandising strategies. just as everywhere else in the world. There is an interesting phenomenon observable these days in Poland: since most of the Multiplexes are owned by American companies they solely advertise films (American production dominates the market) with posters supplied by American distributors where information in Polish is just filled in.”

I've only been able to find two other film posters that Dudzinski designed in Poland in the 70s: one great one for Jaws, another for a little known Polish comedy called Brunet Will Call. 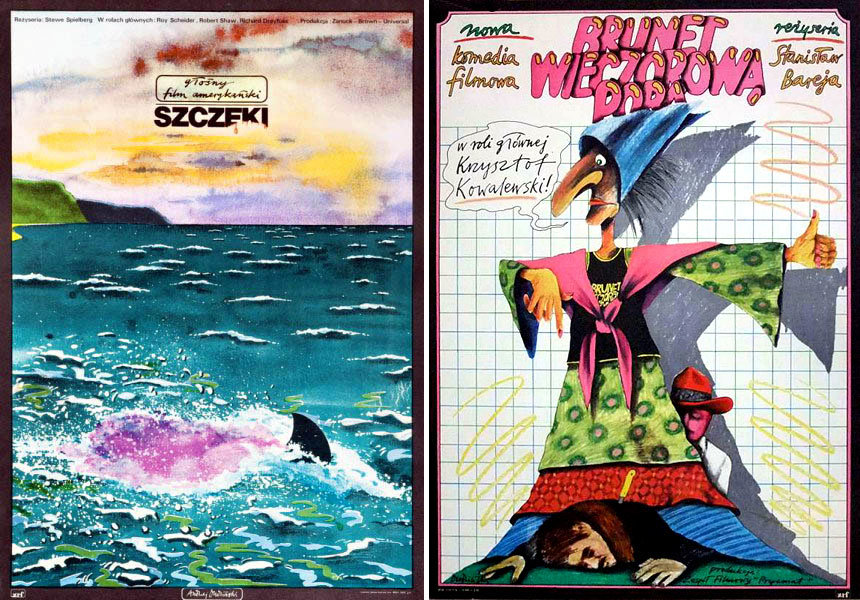 In the US he continued to design the occasional theater poster or posters for Polish film festivals, but movie poster commissions were not forthcoming. And so, when the film magazine KINO offered him a commission he decided to produce a poster for an imaginary film: an idea which blossomed into a book of imaginary film posters coupled with critiques of these Films that Never Were by “otherwise very serious film critics and writers.”

You can see these imaginary posters (like Martin Scorsese’s Hit Man or Peter Weir’s Total Demol) on Andrzej Dudzinski’s website, and watch an interview with him here. ﻿

Meanwhile, in case you were in doubt about the reach of the Things Organized Neatly aesthetic, and the contemporary nature of Dudzinski’s Musketeers posters, check out the new teaser for Harmony Korine’s Spring Breakers.﻿ 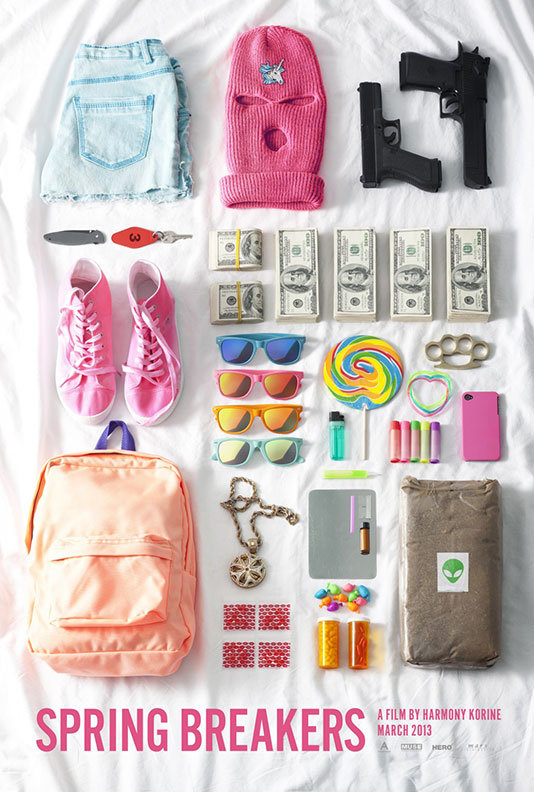