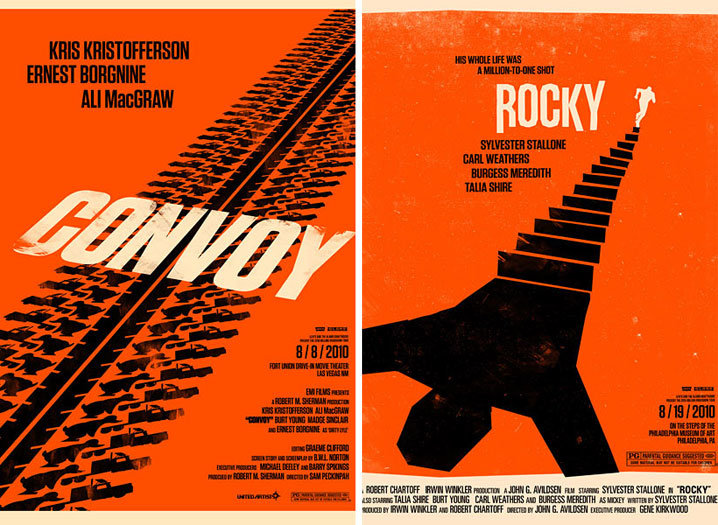 The biggest news in movie posters this past week seems to have been the release of the striking series of Saul Bass-inspired duo-chrome posters for the Alamo Drafthouse’s 2010 Rolling Roadshow series. As readers of this column will know, the Alamo Drafthouse in Austin, TX has in recent years become the patron saint of movie poster design, commissioning insanely talented illustrators to design new posters for retro screenings. With the Rolling Roadshow, they take their show on the road, screening films in the places they were shot, starting with Jackie Brown in the shadow of LAX (not the Del Amo Fashion Mall in Torrance as originally planned), and ending on a rooftop near Little Italy, NYC, with The Godfather Part II.

The 2010 posters were all designed by Olly Moss, a young British designer/illustrator with top-notch skills and heaps of wit. Check out the tire treads on his poster for Sam Peckinpah’s Convoy, made out of big rigs and, if I'm not mistaken, rubber ducks ("Rubber Duck" being Kris Kristofferson’s CB radio handle). And his Rocky poster turns the steps of the Philadelphia Museum of Art (where the film will be screened) into Rocky’s own triumphant shadow. Check out Moss’s website to see a lot more of his work, including a couple of superb Star Trek posters. I especially like the work he files under “Personal Nonsense” in his Design section. All of his work is simple, clean, precise and stealthily brilliant. Just how I like it.

The Alamo Roadshow posters are born out of two prevailing trends: the ongoing (and perfectly understandable) love for Saul Bass among poster designers (check out posters for Precious, Burn After Reading and the upcoming Buried) and a newer phenomenon: the fan poster. These are posters that are popping up all over the internet, created by talented designers in their down time. Like the Alamo posters they are all reimagined designs for old films (Moss has done some previously—check out “Films in Black and Red” on his site) and they tend towards the synecdochally minimalist, taking an element from the film to stand in for the whole (a shower drain for Psycho, a pair of y-fronts for Boogie Nights). Some are wittier and more beautifully rendered than others. My favorites include the gorgeously hued posters of Toronto-based designer Ibraheem Youssef (see his Life Aquatic below): the smart “Spoiler” posters and “Minimalist Superhero” posters of Israeli designer Gidi Vigo; the inspired minimalism of British designers Jamie Bolton (see his Shining below—using just the pattern of the carpet in the Overlook hotel) and Matt Needle (with his matching Hitchcock series); and the more intricate designs of one Mr Bluebird (aka Brazilian designer Mario Graciotti) who specializes in reworking the posters of Paul Thomas Anderson (his are the Boogie Nights underpants) as well as Hitchcock and Pixar. One of my favorites of all is this brilliant design for Coffee and Cigarettes which cannily incorporates both elements of the title into an ampersand. If anyone knows who designed that poster, or knows of other equally worthy series of fan posters, please let me know.

Postcript: I’ve been told that the Coffee and Cigarettes poster is by one Viktor Hertz, whose flickr feed features some great movie poster mash-ups (Tolstoy Story anyone?). 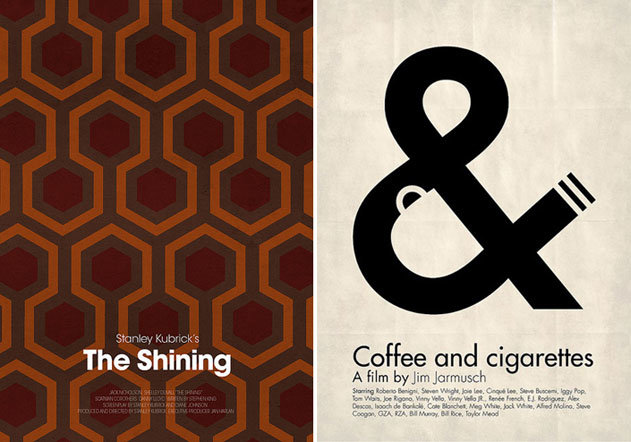 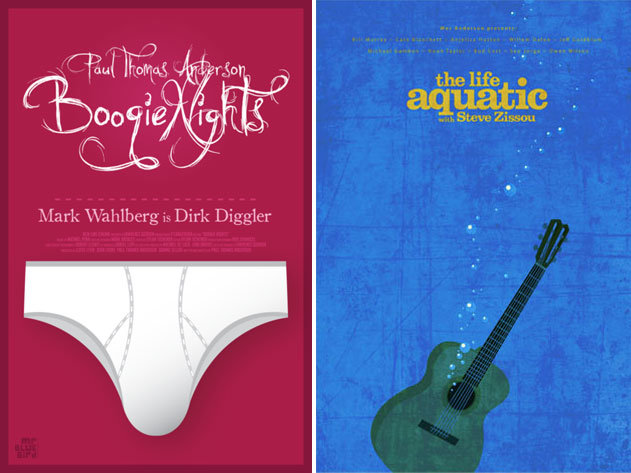