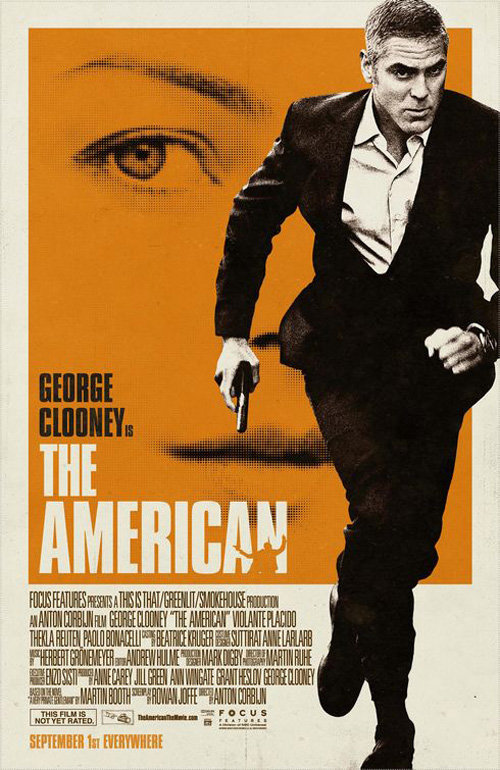 The dynamic new poster for Anton Corbijn’s The American is a clever pastiche of mid 60s action movie posters that trumpets its hipness (would we expect anything less from the director of Control?). With its two-color printing, its high-contrast photographs, its monochrome rectangle of color and its billing block within a white frame, it could be a lost object from that era. You can see some of its antecedents (of the more macho variety) below. There are a few major differences: those posters were nearly always printed non-bleed, hence the white frame, a case no doubt of cost dictating style (non-bleed printing being cheaper than bleed, two colors being cheaper than four). George Clooney however, is noticeably bursting out of the edge of the frame (I have a feeling the designers at Mojo had probably looked at Steve McQueen in the French poster for Bullitt). Another convention of the era was that the star’s name and the film’s title were often not only in the same typeface but in the same point size. Even George Clooney doesn’t get his name in title-size type these days, or maybe it's rather that no-one dares print titles as small as they once did. (And when did quotation marks around the title, as in Point Blank, finally go out of favor?)

Another feature of this style of poster is the minor cut-out photo, or drawing, in the white space next to the title and credits, usually giving a different perspective on the film (sex and romance instead of action) from a lolling Angie Dickinson in Point Blank to a handlebar-straddling Katherine Ross in Butch Cassidy and the Sundance Kid. The American instead makes do with the silhouette in the title itself, a more contemporary trope, while placing the love interest in the background. And The American is sorely missing a tagline (“Just one weakness. Just one.”).

All in all, as smart as it is, there is something slightly too modern about the American poster that stops it being a perfect hommage, but that’s all well and good. I don’t mean to nitpick, just to point out what the conventions of those posters were exactly. What this poster does do is put Clooney in the company of gun-toting, chest-baring, bitch-slapping tough guys like Marvin, Newman, Sinatra and Martin, and that’s right where they want him.