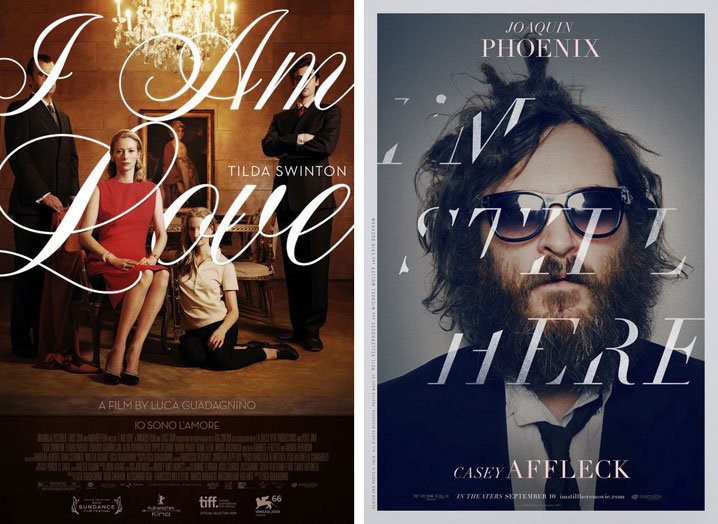 Tied for 1. I AM LOVE and I’M STILL HERE

My two favorite movie posters of 2010: one for one of my favorite films of the year, the other for a film that I didn’t even see (not from lack of desire, though Casey Affleck’s opening weekend fess-up dampened my enthusiasm somewhat), and a perfect pair.

I have a lot of affection for the simple movie poster that places perfectly chosen type on a beautiful film still, but these are something else. For one thing, their images are portraits rather than film stills (Tilda Swinton at her most elegant, Joaquin Phoenix at his most studiously disheveled), and for another, the title treatments are given equal billing to the image, seemingly fighting with it, potentially overwhelming it, ultimately embracing it. It’s nice to see serif and script fonts being used so stylishly in the age of sans-serif minimalism; I only wish I Am Love didn’t have to devote so much real estate to the billing block, something I’m Still Here dispenses with entirely (instead crediting the designers and photographer). I Am Love was designed by The Refinery, I’m Still Here by the great Kellerhouse, who also designed my favorite poster of 2009. 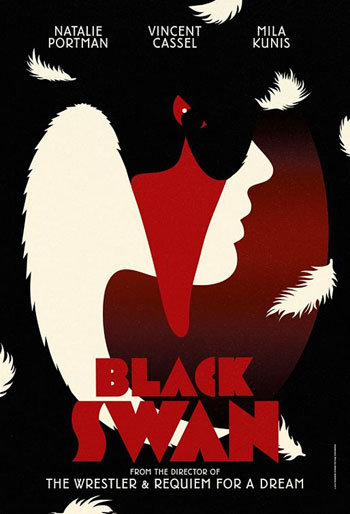 The most talked about and blogged about movie posters of the year were a series of four limited edition illustrated teaser screen prints for Black Swan, created by UK designers LaBoca. They are brilliant and there is not much more to say about them other than that I wish I owned a set. This was my favorite of the four, the design that best captures the sinister transformations and malevolent couplings of the film itself. 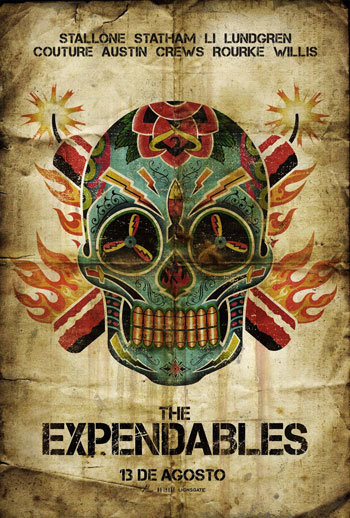 Sylvester Stallone’s all-star tough guy revue The Expendables (a left-field favorite of some of the MUBI team) boasted the usual slew of character posters and ensemble posters (IMP Awards has 22 different designs), none of which were anything special, but this beautifully illustrated Mexican poster is in a league of its own.

5-7. THE AMERICAN; AND EVERYTHING IS GOING FINE and CARLOS

The revenge of monochrome. Though it isn’t perfect, the poster for The American was nevertheless a sight for sore eyes in multiplexes this summer (it was definitely the only one of the posters in my list that I saw on subway platforms). Sam Smith’s similarly retro poster for Carlos takes up the ’60s action movie gauntlet thrown down by The American and comes up with something more authentic, which I’m proud to know Movie Poster of the Week had something to do with. And, included not just because these three posters look so perfect together, the duotone poster for Steven Soderbergh’s Spalding Gray doc And Everything is Going Fine is a masterpiece of simplicity. As a matter of fact, it would also work really well posted next to... 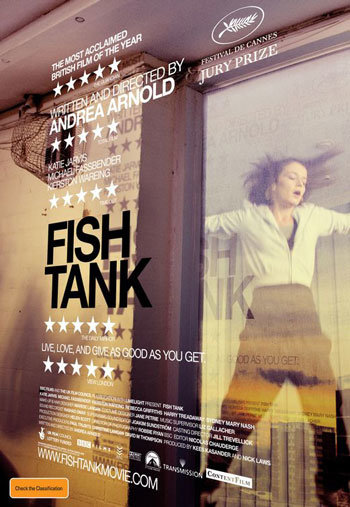 The Australian poster for Andrea Arnold’s Fish Tank, (another of my favorite films of the year) designed by Jeremy Saunders (he of the Antichrist scissors), is the one Fish Tank poster that gets it right, conveying both Katie Jarvis’s exuberance and her council flat confinement. And Jarvis really looks as if she is floating in a tank of water. (If only Criterion had used Saunders’ design instead of this). It also has one of the best solutions to excessive type (quotes, awards, taglines, credits galore) that I have seen for a while (and dig the shadows which continue the floating effect). Saunders’ design for The Parking Lot Movie can also be seen in the runners-up below. 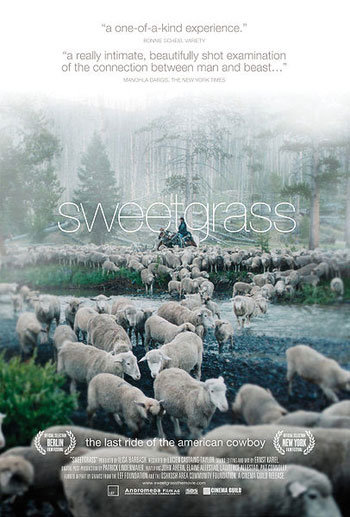 Did I mention my love of perfectly chosen type on a beautiful film still? This might be the nicest example I saw all year. Come back Helvetica (Neue Ultra Light), all is forgiven. 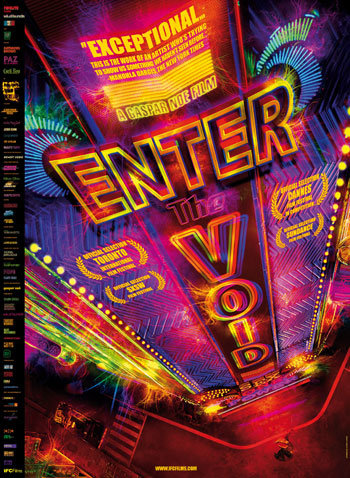 From minimalism to maximalism. I didn’t truly appreciate this poster until I saw the film, but now I know how perfectly it conveys its garish neon-hued universe and its vertiginous omniscience. I'm not even sure how this poster was made. Is it photography, is it illustration? I also love the multi-font credit block running down the side of the poster (the very same credits which strobe by during the opening of the film itself). For full effect see it in detail here.

Feel free to disagree (what, no Inception?) but below are the rest of my Top 40 movie posters of 2010, in no particular order other than a very deliberate aesthetic one. Happy New Year to all. 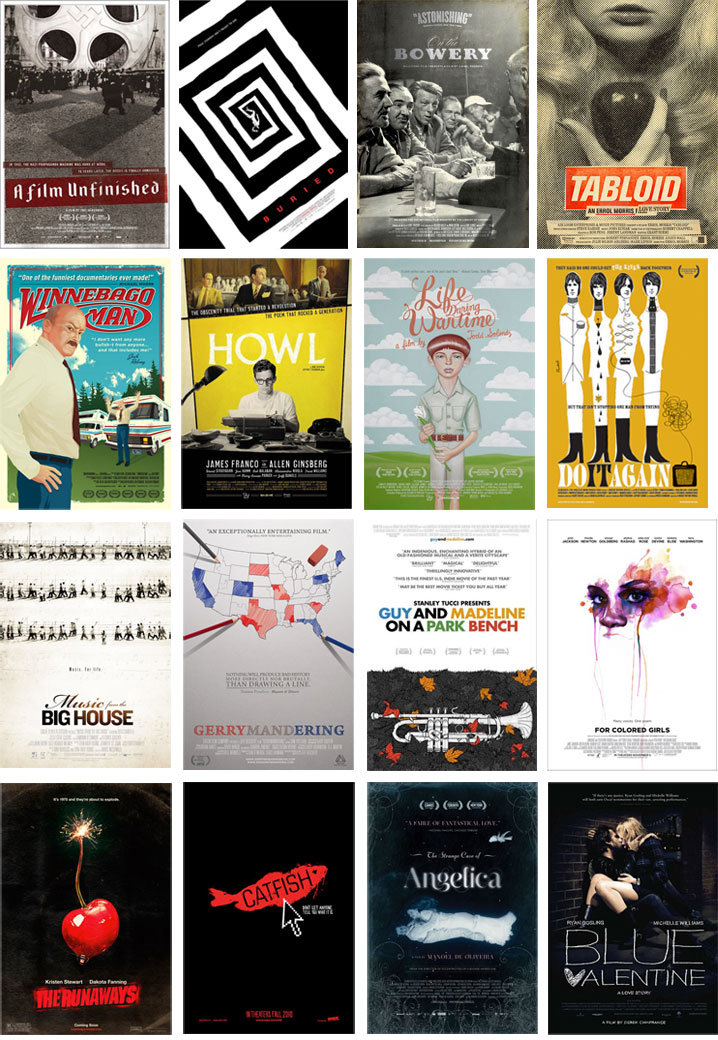 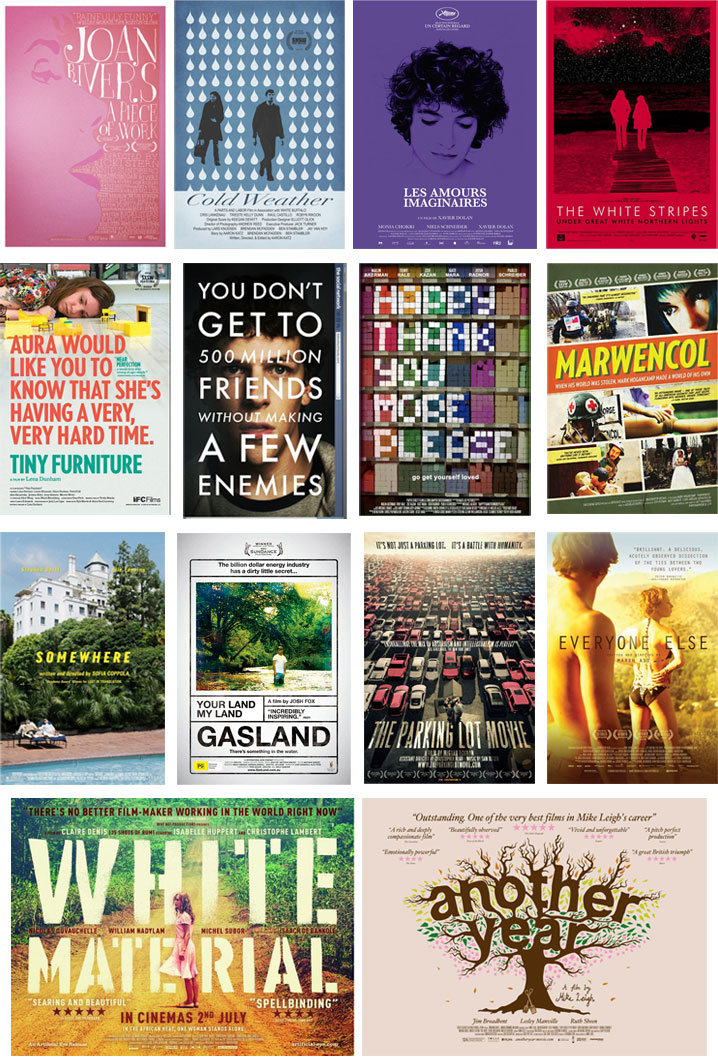