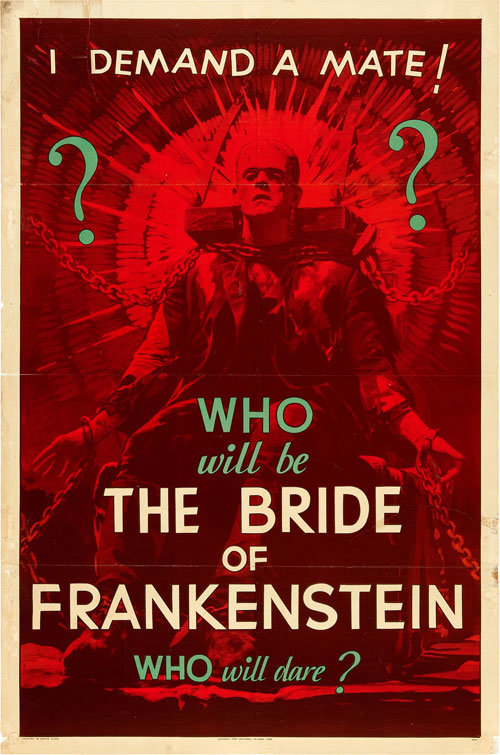 A couple of weeks ago there was a lot of buzz about the fact that this rare teaser poster (the only one known to be in existence) for the 1935 The Bride of Frankenstein was poised to break the world record for the sale of a movie poster. The record, held since 2005, was for one of four known copies of a 1927 German poster for Metropolis, which sold at London’s Reel Poster Gallery for $690,000. Prior to that the record had been held for 8 years by a poster for the 1932 The Mummy sold in auction at Sotheby’s in New York for $453,500. (The third highest selling poster of all time, for the record, is also Metropolis). It was hoped that the Bride poster would fetch over $700,000 at Heritage Auctions in Beverly Hills (Heritage, based out of Dallas, handles 70 percent of the world's movie poster auction sales) but it failed to reach its minimum price and didn’t sell.

Of the ten highest grossing movie posters of all time, seven are for horror films (“Early Universal Horror movie posters are the blue chips of the collecting hobby,” says Heritage Auction’s Grey Smith), and almost all are for monster movies if you include the sci-fi Metropolis as a kind of monster movie. The lone exception is the 1933 musical Flying Down to Rio, a poster for which sold for $239,000 in 2008. Notably, all ten are for films made in the decade between 1925 and 1935. (You can see a slideshow of the entire top 25 here.) 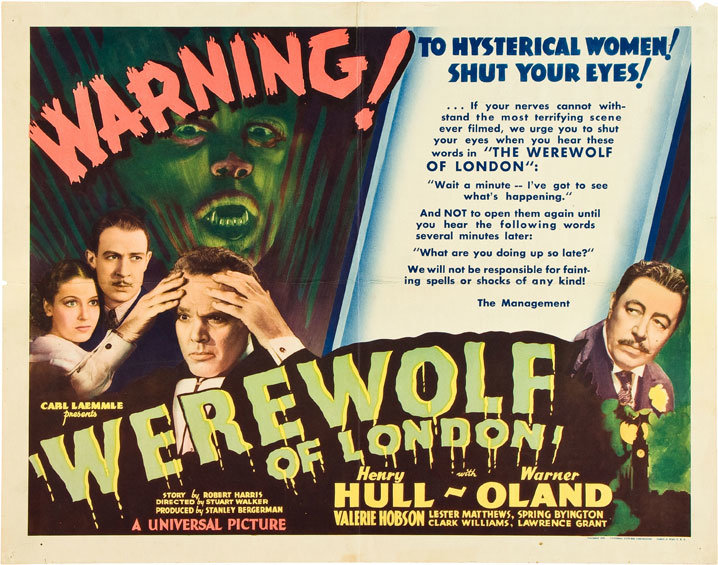 In the end, the highest price raised at last week’s auction was for the half-sheet (22" x 28") for the little known Werewolf of London (“one of Universal's earliest horror classics” and “the first [film] to deal with the horror of lycanthropy”)—with its wordy injunction to “hysterical women”—which sold for $47,800. Nowhere near the three-quarters of a million they were hoping for Bride of Frankenstein, but still hardly chump change. Proving that, in the world of movie poster collecting, size doesn't matter as much as you’d think, the rest of the top ten highest-sellers at last week’s auction ranged from a giant 9 foot tall Austrian poster for King Kong to a 14" tall "midget window card" for Boris Karloff in The Walking Dead. The others were a large Italian 4-foglio (55" x 78") for La dolce vita, one-sheets (27" x 41") for Out of the Past, Casablanca, the 1948 Superman, The Grapes of Wrath, Dodsworth and Bette Davis’s pre-coder Ex-Lady, and an 14" x 36" insert for Oceans 11, all of which sold for between $10,755 and $38,837. 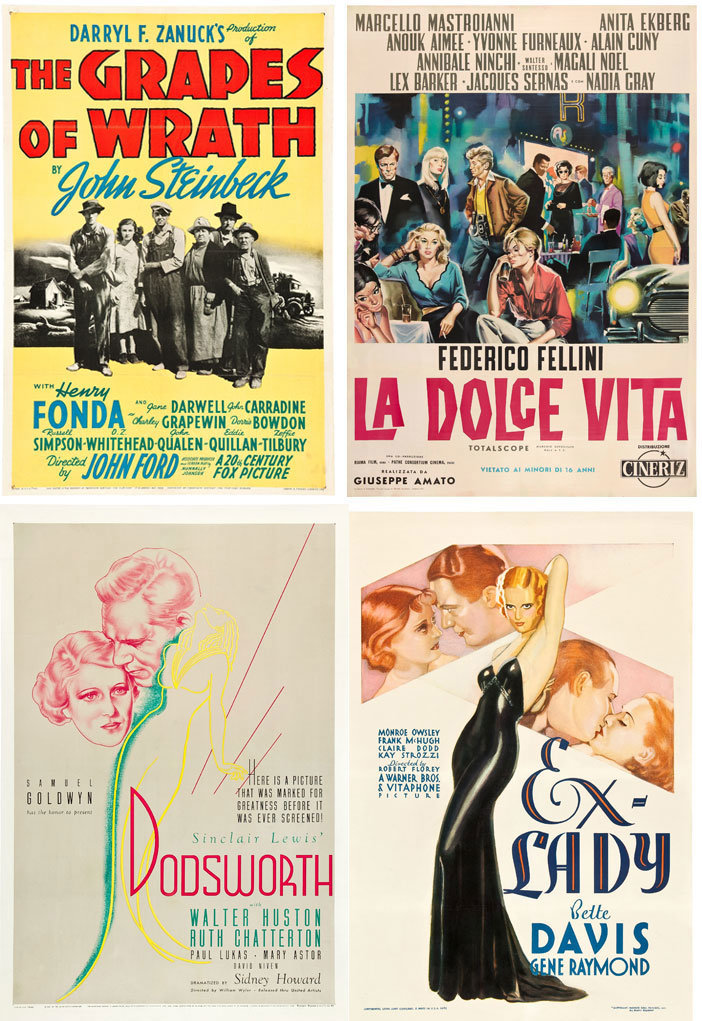 It does make you wonder who, these days, can afford to buy posters at these prices, though Hollywood celebrities are said to be among the biggest buyers. An auction at Heritage earlier this year boasted “selections from the collection of famed Metallica guitarist Kirk Hammett.”

While most classic Hollywood stuff sells in the thousands there were nevertheless deals to be had at the most recent auction and I've selected some of my favorites below, including a beautiful Saul Bass silk screen for Such Good Friends and a stunning Polish poster for In Cold Blood, all of which sold for under $200 each. 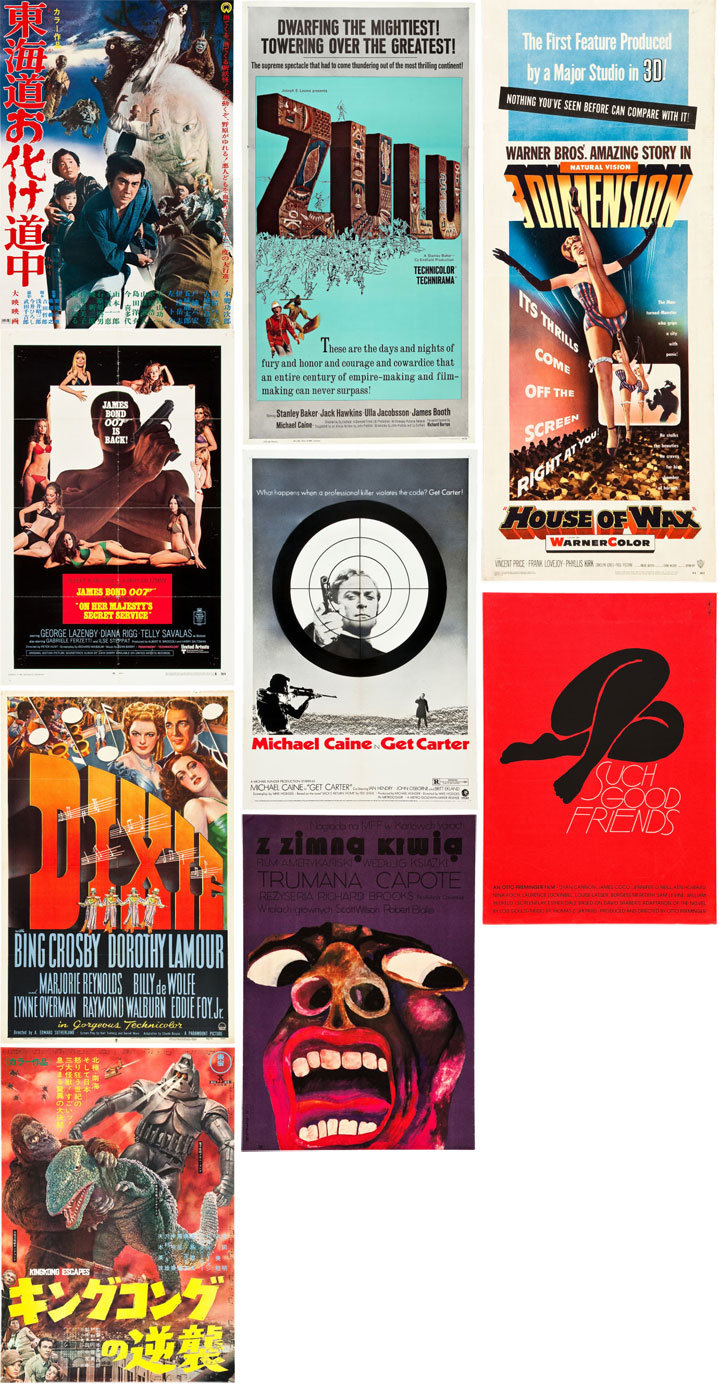