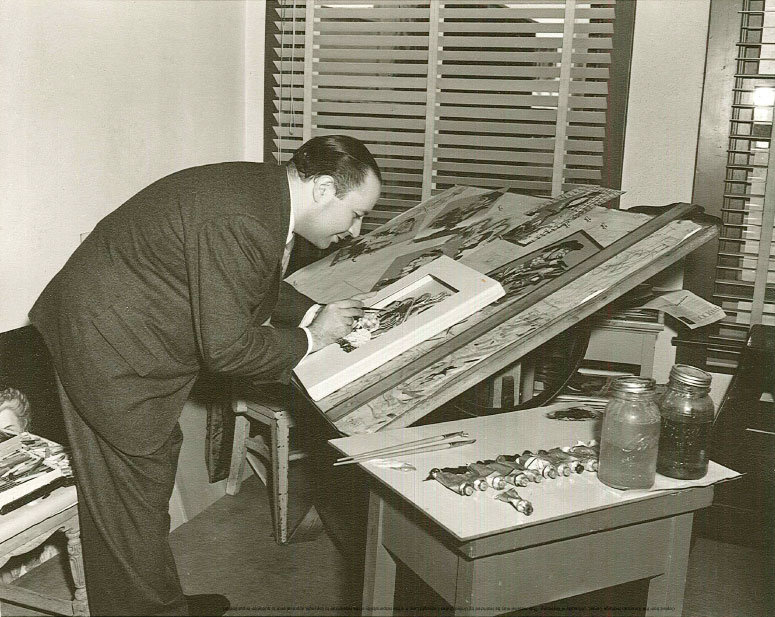 Last October I wrote a post about the illustrator and poster designer Jacques Kapralik. I had stumbled across Kapralik’s name and found a small amount of information about him online. My article generated interest from movie title afficionado Christian Annyas who provided me with some of Kapralik’s title sequence designs for MGM. But I was delighted a few months later to get a message on one of the posts telling me that the American Heritage Center at the University of Wyoming holds an archive of Jacques Kapralik’s work and papers. Archivist Emily Christopherson told me that the university has the paper dolls that were used in the title sequence for Presenting Lily Mars that I had featured. Since I had previously seen only black and white photos from that sequence it was a treat to see them in color and in so much eye-popping detail (click to see large). 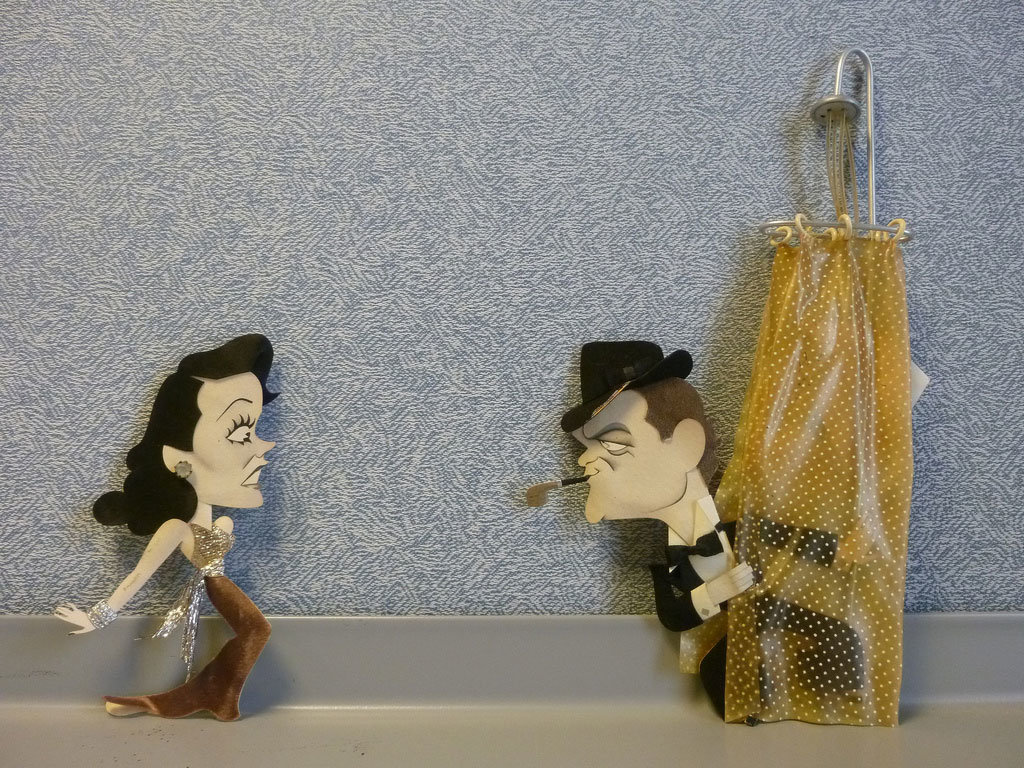 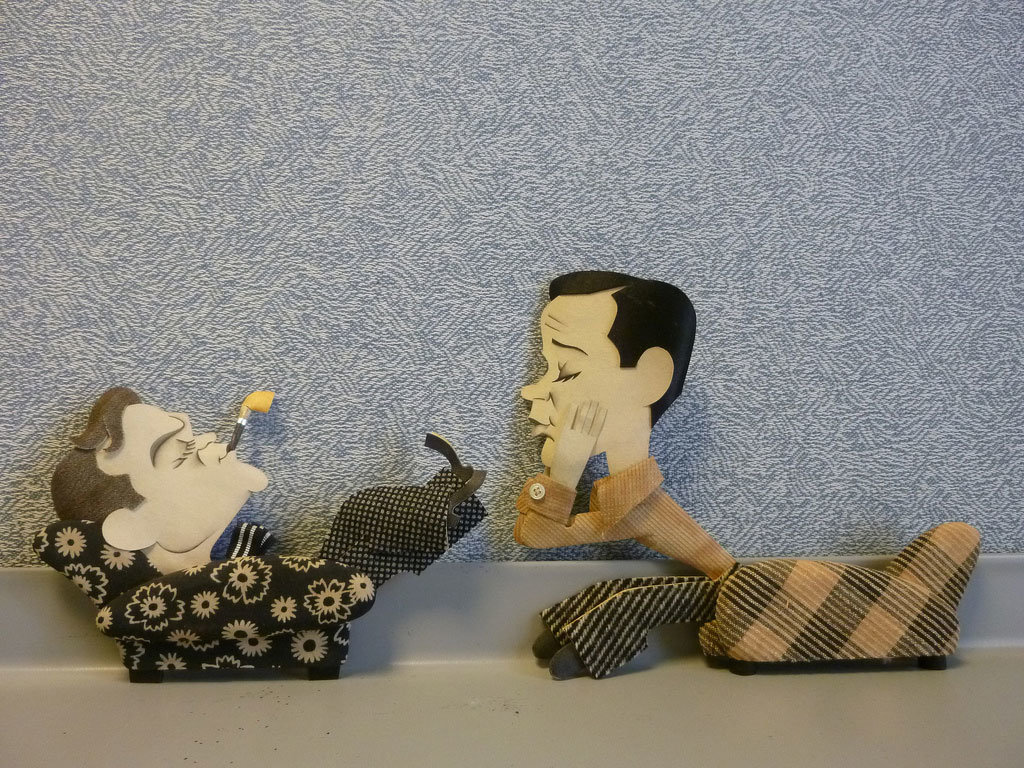 ﻿You can see more of the paper dolls and some of the preliminary sketches here.

The short biographical introduction to the archive reads: “Jacques Kapralik was born in Romania in 1906, and immigrated to the United States in 1936. He was a commercial artist and caricaturist whose art was used in the promotion of motion pictures. Kapralik’s distinctive style involved the creation of miniature models from paper and balsa wood. The models were then photographed. These photographs were used as promotional posters for motion pictures, predominantly MGM films. They primarily appeared in trade magazines and press kits. He also created movie posters in the more traditional caricature format for other companies, such as Universal Pictures, and for motion picture advertisements in the Pictorial Review, a newspaper insert on motion pictures of the time. Kapralik also created advertisements for companies such as Nutrilite and S&W.﻿”

The archive, which was donated to the university by a cousin, is incredibly comprehensive, containing framed 3-dimensional models for as many as 60 films; over 100 different small promotional posters (9.5" x 12.5") made for MGM between 1940 and 1960﻿ for use in trade magazines and press books; over 150 Pictorial Review newspaper inserts featuring Kapralik’s caricatures on the cover; and beyond that a treasure trove of sketches and caricatures, personal photographs and research materials.

The entire list can be seen here.﻿ But one file that really caught my attention was titled “Earnings and royalties, 1938-1960.﻿” Having no idea what an artist of Kapralik’s caliber and uniqueness, under contract to a major studio, would have earned at that time﻿, I asked Emily if she could give me some information from the file. Here’s what she wrote:

“Most of the royalty statements in the collection are from the 1950s. There are some from the 1930s, but it’s from when he was still working in Europe, and it’s all in German (and there’s not much of it). In the early 1950s, he did work for various advertising agencies for products such as Nutrilite, S&W, etc. For ‘paper sculture art’ he was paid anywhere from $200-450. Although for a couple of color S&W ads (for the company Foote, Cone and Belding) he was paid $800. I believe most (if not all) of his ad work for non-film related companies was done in the style most associated with him – paper sculpture art (as it’s listed on the royalty statements). Mytinger & Casselberry, Inc. paid him $950 for a “jointed puppet” for some ad work. There are a few smallish 3-D paper caricatures in the collection (more similar to puppets than the paper doll art) - I guess maybe these were considered ‘jointed puppets’? But I am not certain about that.﻿

“He did many B&W drawings/caricatures for Universal films in the early 1950s, and was paid $100 per drawing. For MGM, it looks like he was paid $700 for each of the posters he created (later 1950s). Most (if not all) of the MGM work was done in the typical Kapralik style (paper sculpture art), although there are some instances where he was paid $200 or $500…not sure why the difference. I would guess for things less complicated. I didn’t see any statements related to producing scenes for the title sequences of films (the Presenting Lily Mars film, for example), so I don’t know what he got paid for that.”﻿

According to one inflation calculator, $700—the amount Kapralik received for a poster for MGM in the late 1950s—would be the equivalent of over $5,000 today, which would be an impressive fee for a freelance designer, though top design studios working on Hollywood movies would charge much more today. As an in-house designer for MGM, however, Kapralik would have had very regular work and would I assume have been considered a very successful commercial artist.

I leave you with some fascinating photos of the man himself, at work on his 3-dimensional constructions and caricatures. [These are published with the consent of the American Heritage Center and may not be reproduced without their consent.] 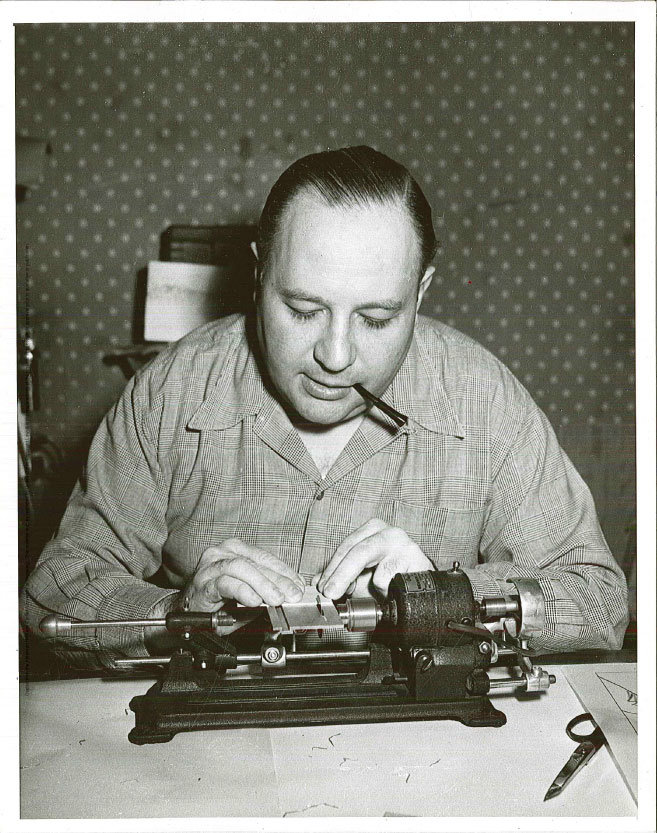 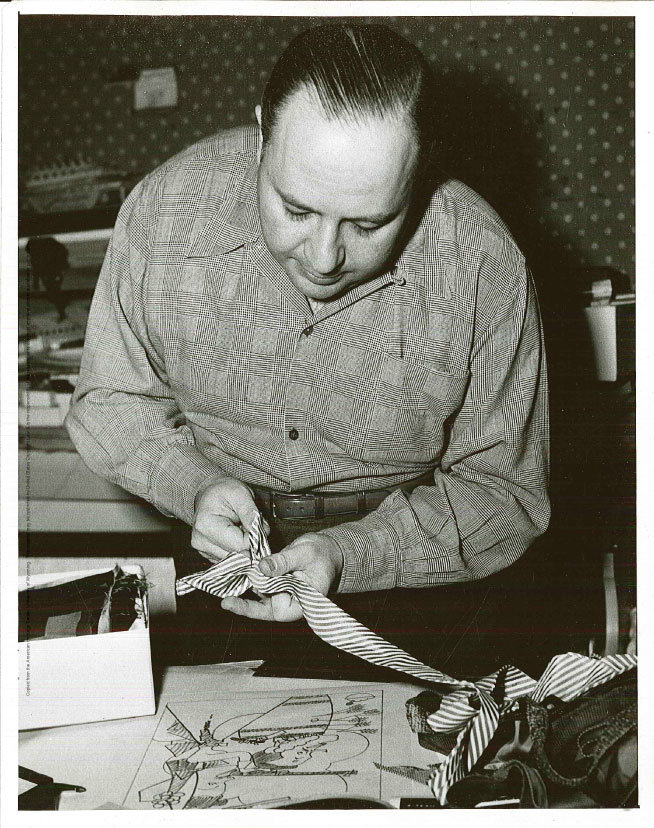 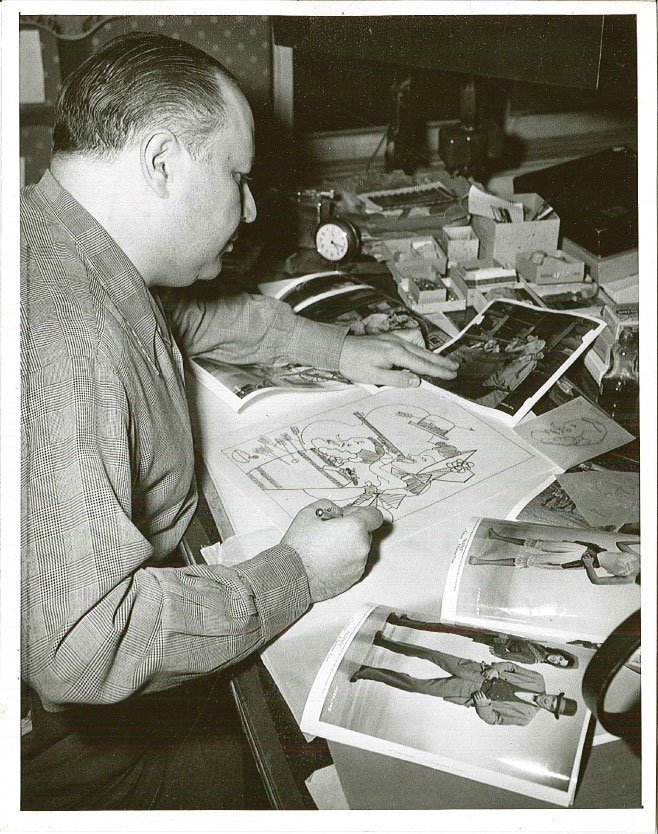 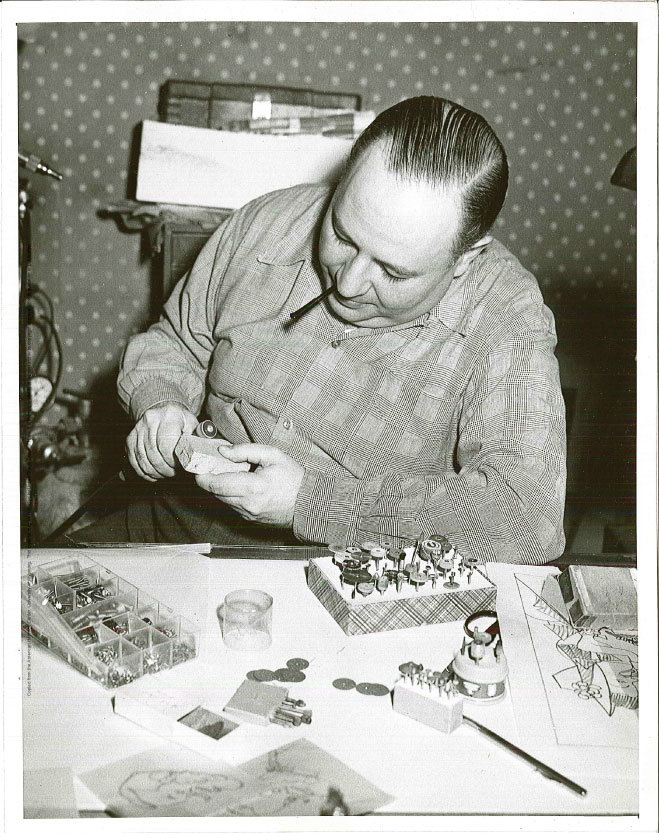 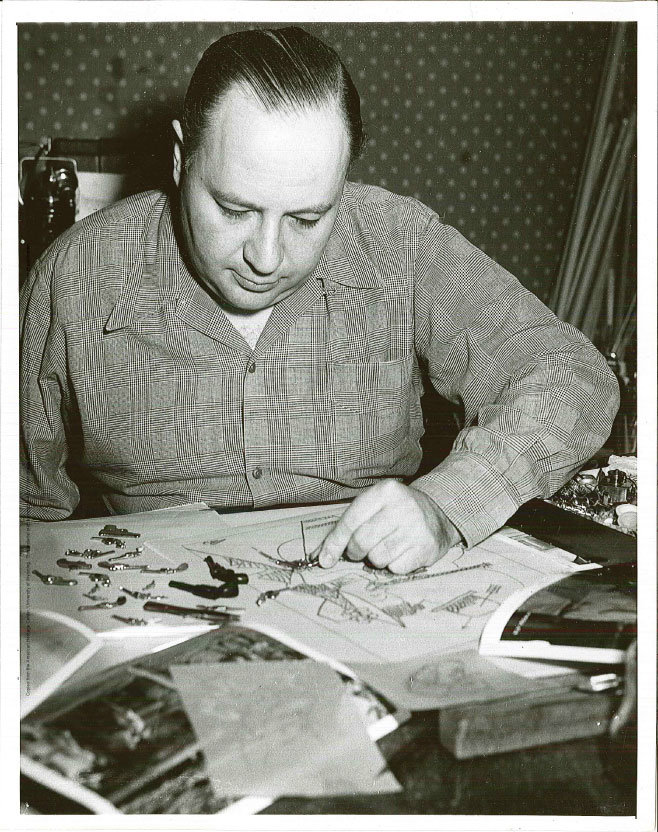 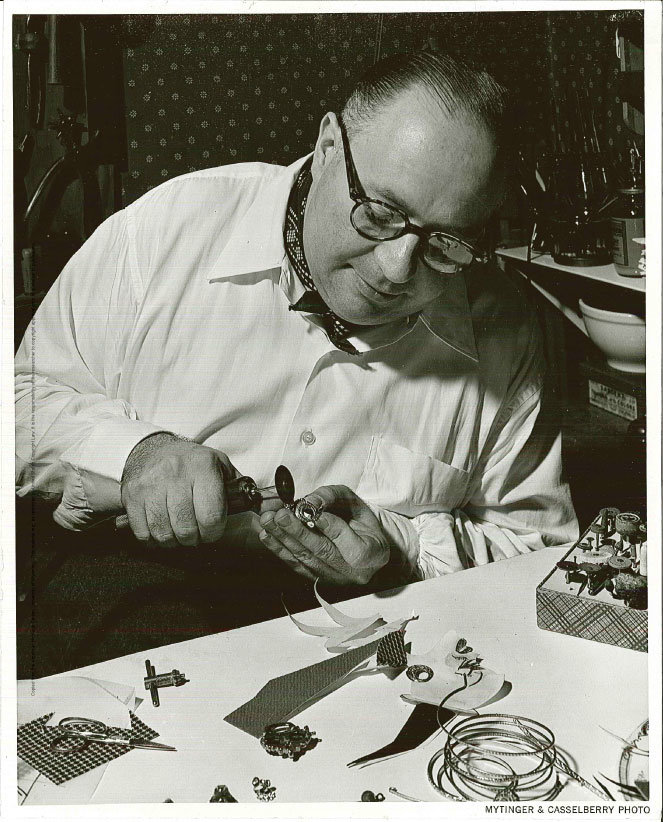 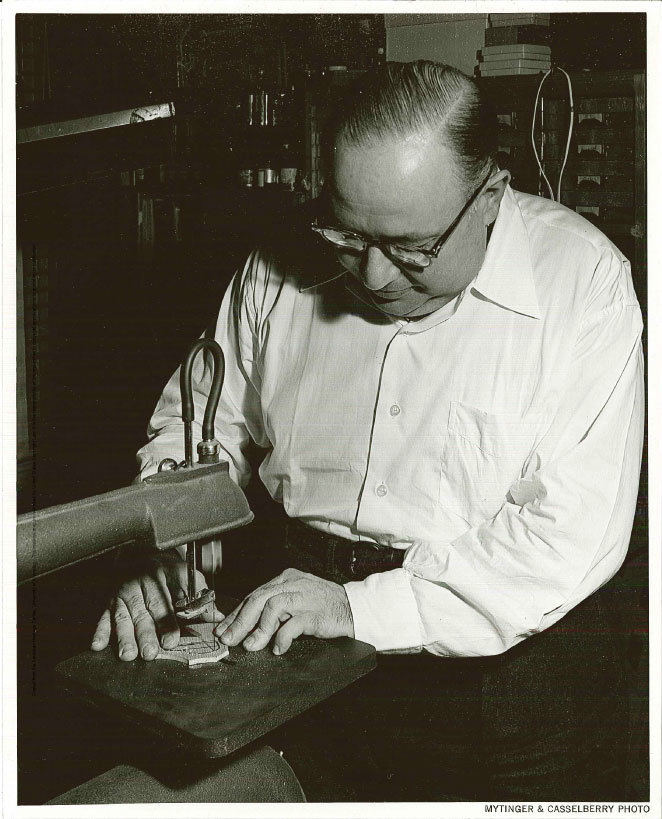 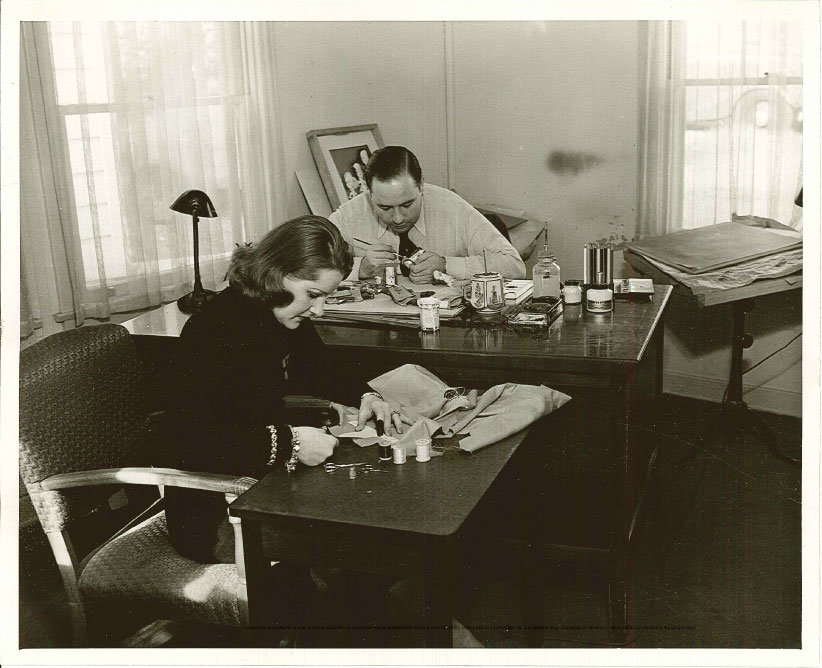 With his wife, Hedy, who helped him create his miniatures. 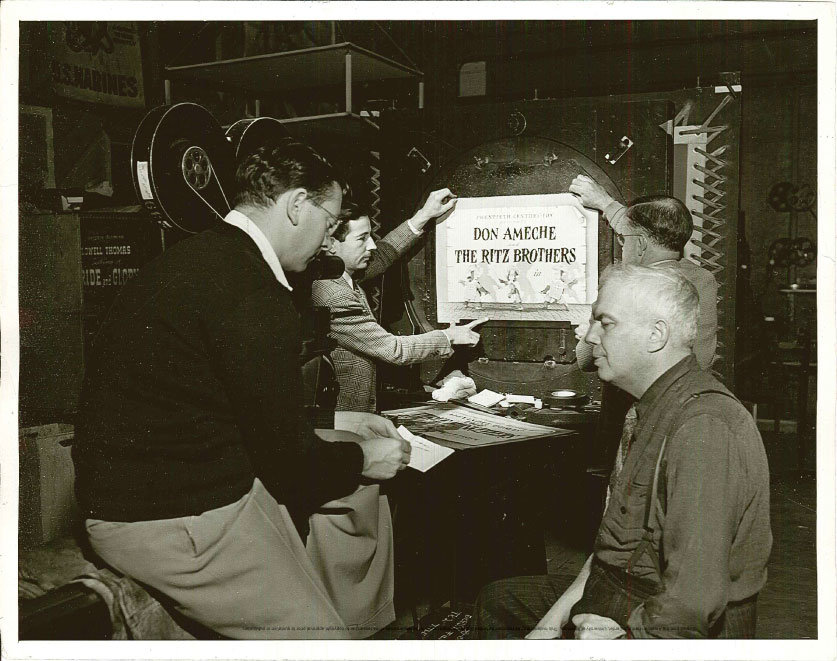 Emily tells me “At some point in the future, all of his framed 3-D caricature scenes [there are over 60 of them] will be digitized and put online, with the possibility of some of his other artwork and photographs.﻿” The list of his 3-D work includes The African Queen, The Best Years of Our Lives, Brute Force, Duel in the Sun, Easter Parade, The Greatest Show On Earth (signed by Cecil B. DeMille), The Killers, Naked City, The Quiet Man, Streetcar Named Desire, as well as Hitchcock’s Notorious, The Paradine Case and Under Capricorn, all of which I can’t wait to see.

Many, many thanks to Emily Christopherson and the American Heritage Center﻿ for preserving this invaluable collection and for allowing me to reproduce these photographs.