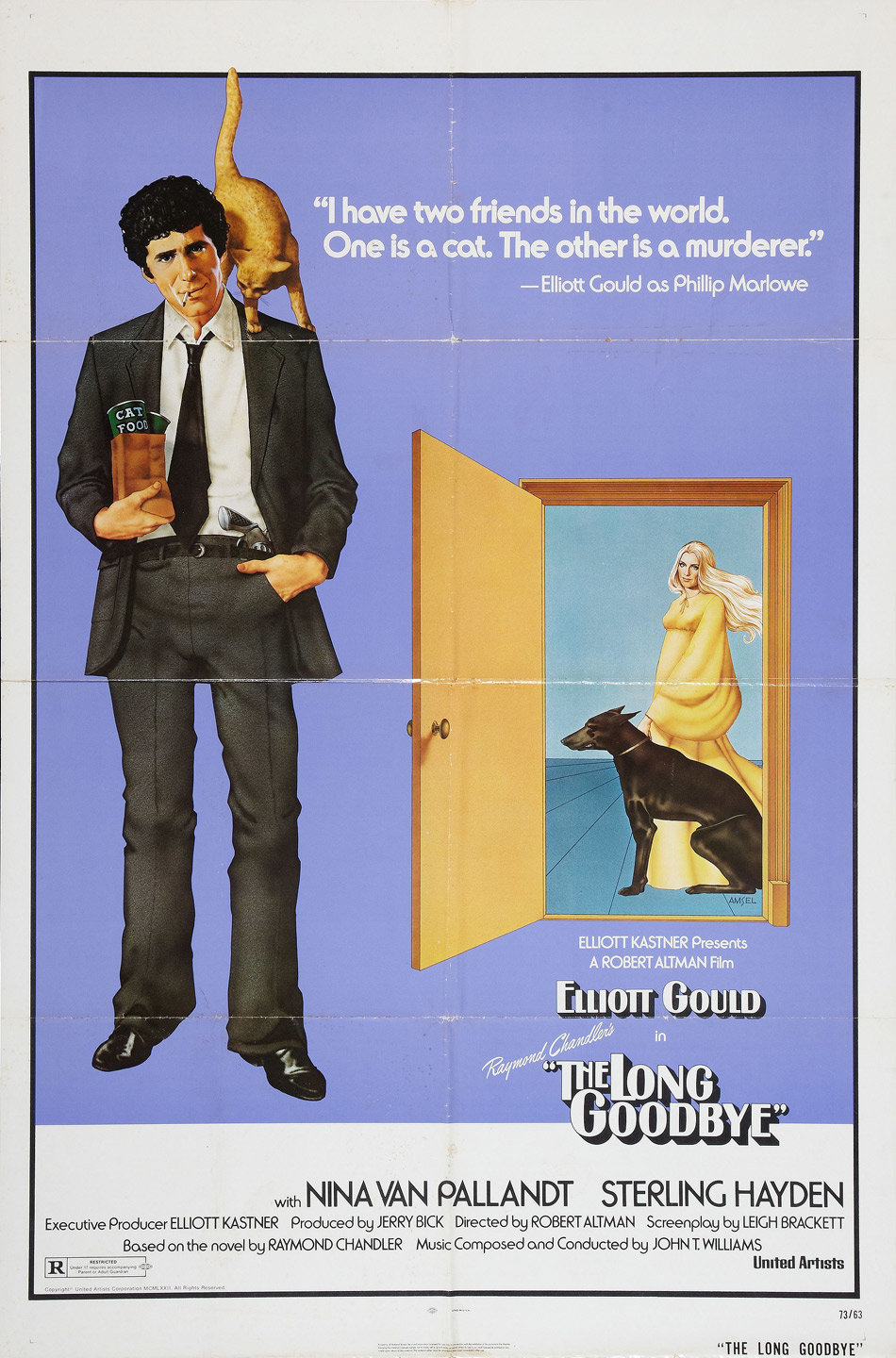 This superb poster for Robert Altman's The Long Goodbye—one of my very favorite films—was illustrated by the great Richard Amsel (1947-1985). Amsel was a prodigy whose career hit the ground running when, aged 22 and still a student at the Philadelphia College of Art, he won a nationwide contest sponsored by 20th Century Fox to design a poster for Hello Dolly. For the next 15 years, until his untimely AIDS-related death at the age of 37, Amsel illustrated some of the best loved posters of the '70s and early '80s, including, most famously, those for The Sting and Raiders of the Lost Ark. His poster for The Long Goodbye is one of his more elegantly spare designs, conveying Elliott Gould's rumpled, tough guy charm as Philip Marlowe, as well as a hint of mystery in Nina Van Pallandt's robed figure in the doorway. Just the elements one would need to sell Altman's offbeat update of Raymond Chandler.

When the film premiered in 1973 at a weekend retrospective of Chandler movies in Tarrytown, New York, it was not well received. Altman was present for a Q&A and sensed a hostile response to the film. It opened to lackluster reviews and disappointing grosses in L.A. (where it played Grauman's Chinese), Chicago, Philadelphia and Miami and was promptly pulled from distribution before its New York opening. The rumors were that it was going to be re-edited, if not shelved, but instead United Artists analyzed the reception the film had received and decided that the fault lay with the misleading ad campaign for the film that made it look like a straightforward detective story. So the studio spent $40,000 on a new campaign designed by Mad magazine artist Jack Davis, (b. 1924), whose cartoon illustrations had already enlivened It's a Mad, Mad, Mad, Mad World and Woody Allen's Bananas. Davis's poster, seen below, reimagines the film as a wacky free-for-all with Altman as ringmaster. Elliott Gould still has a cat on his shoulder, but no revolver in his belt, and you only have to look at the difference between Van Pallandt's dogs in each poster—one sleek and aristocratic, the other mangy and feral—to see how these posters are worlds apart. Altman's speech bubble ("Hi! I'm high-powered director Robert Altman") pre-empts criticism that this is not your father's Philip Marlowe (something the Tarrytown audience hadn't been prepared for) by declaiming "This film is full of fun—murder, maiming, drunkenness, infidelity, topless yoga freaks, four-letter words—everything!" (click on the poster to read more). 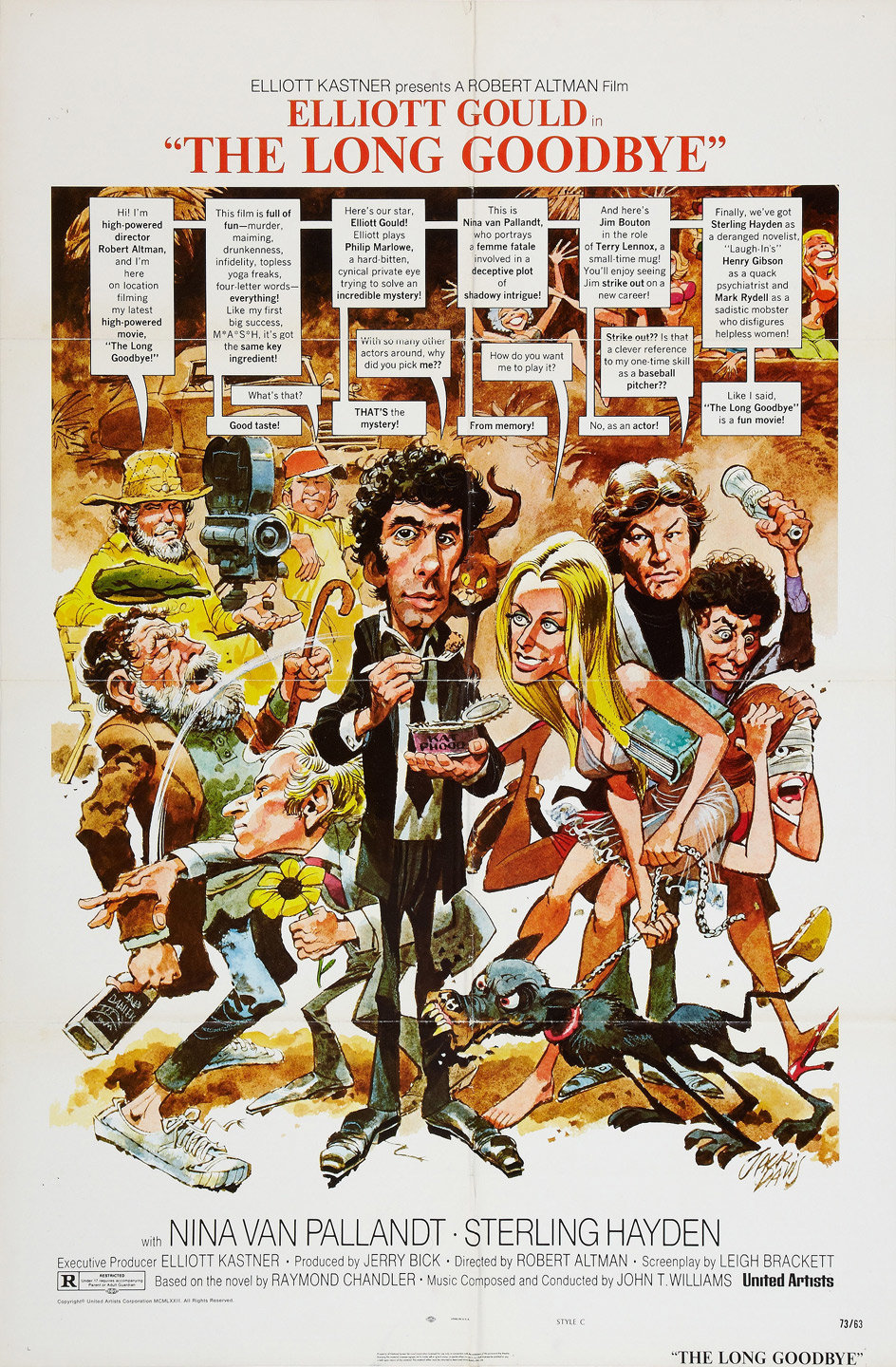 The film was finally released in New York six months after the original opening and got a new lease of life, ending up on the New York Times' Ten Best list. In Mitchell Zuckoff's recent oral biography of Altman, David Picker, the head of United Artists at the time, who had championed both Gould and Altman for the film (though Peter Bogdanovich was actually his first choice to direct) says "I found [Altman's] conduct in relation to us at United Artists and toward me personally incomprehensible. He took credit for something that we did. We're talking about the entire way the picture was released. I liked that picture a lot and I didn't like the way our marketing people initially distributed it. I pulled it out of release and did a whole new marketing campaign, and Altman took credit for it. He didn't have the grace to give us credit for it, and I told him to go fuck himself."

Meanwhile the studio, or at least its international marketing department, must have decided that audiences overseas would accept the film as a more straightforward private-eye thriller, hence the international release poster below, artist unknown. 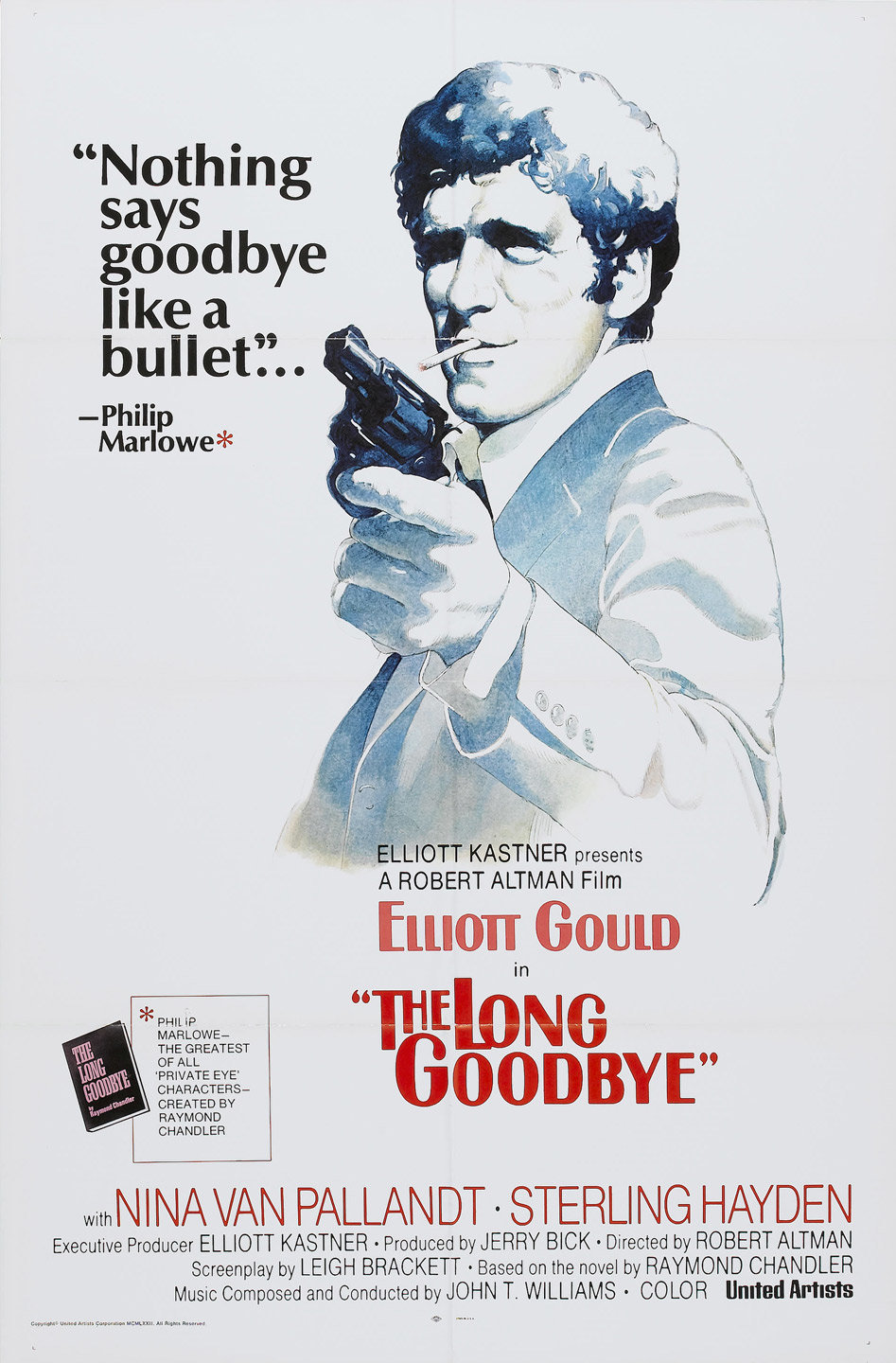 There is also a second Richard Amsel illustration for the film (Amsel's trademark signature is not on the poster, but Amsel fan and archivist Adam McDaniel credits it to him): 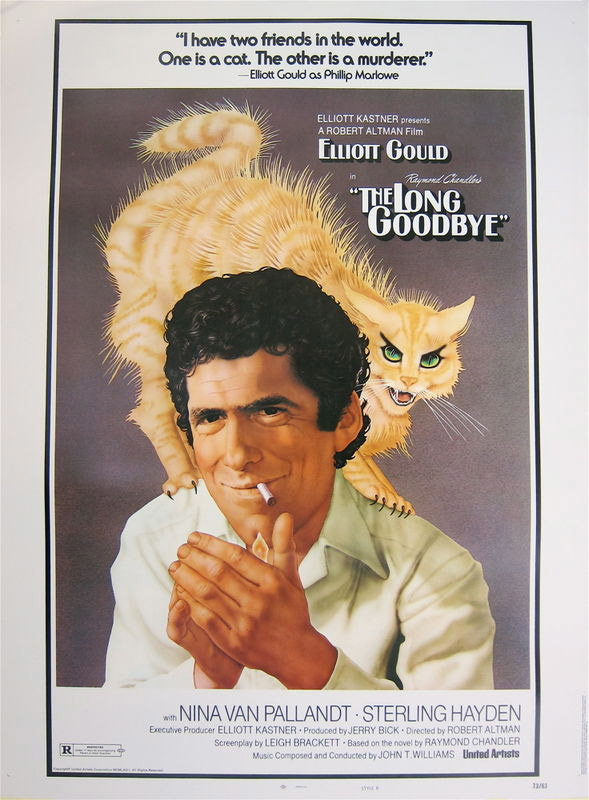 And Amsel's original design appeared on the film's lobby cards: 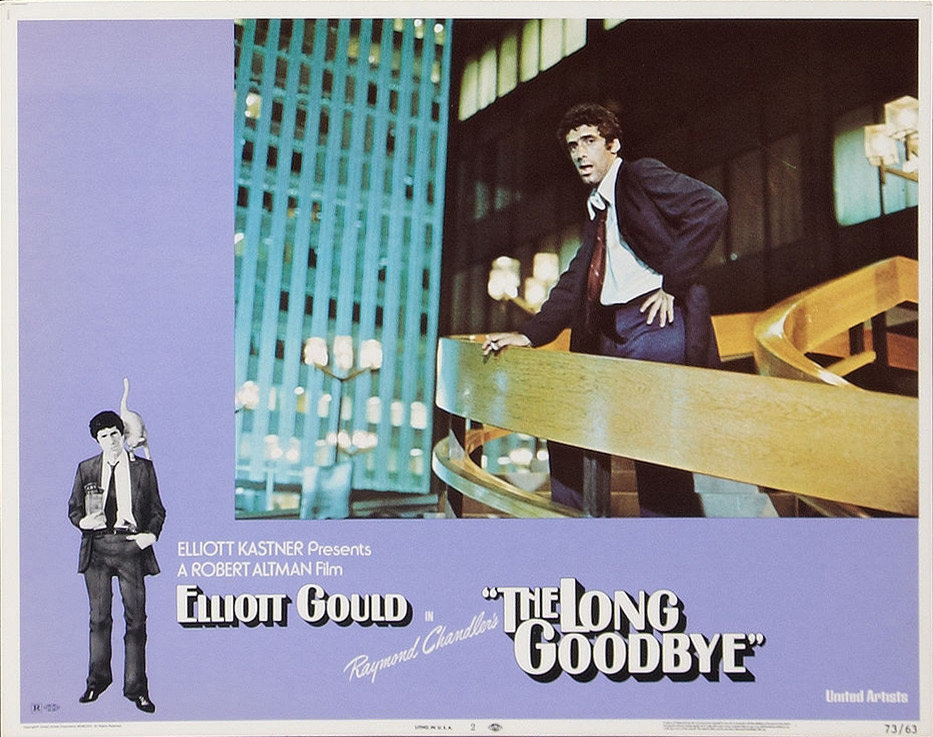 Jack Davis never did another Altman poster, despite the success of his Long Goodbye campaign, while Amsel, whose had earlier created the amazing poster for Altman's 1971 masterpiece McCabe & Mrs. Miller (another film that got a campaign reboot after its title was changed) by painting directly onto a piece of wood... 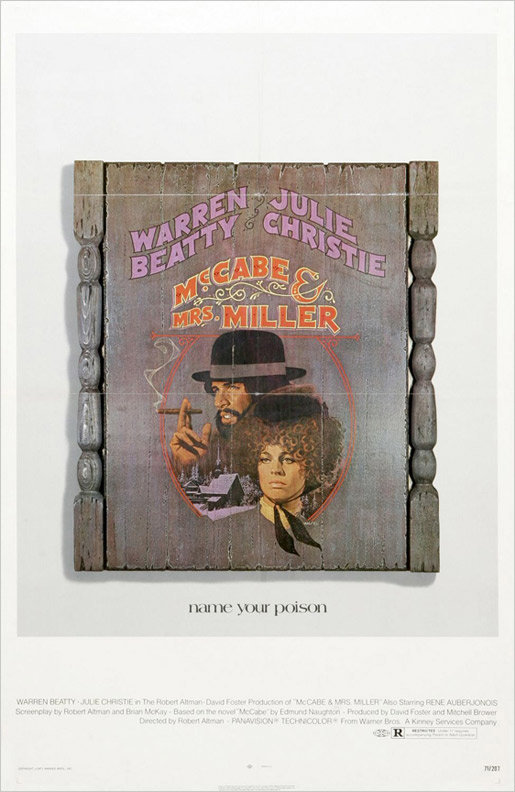 ...went on to draw this unused illustration for Altman's Nashville in 1975. (The studio again decided to go with something wackier). 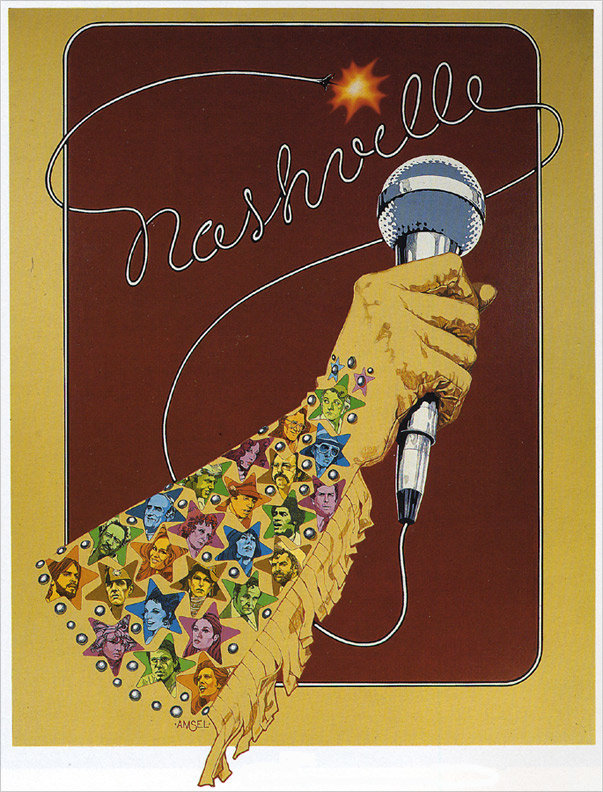 Amsel did however get another chance at a Philip Marlowe poster (and producer Elliott Kastner finally got to cast Robert Mitchum—his initial choice for The Long Goodbye—as Marlowe) with the Michael Winner directed 1978 remake of The Big Sleep. 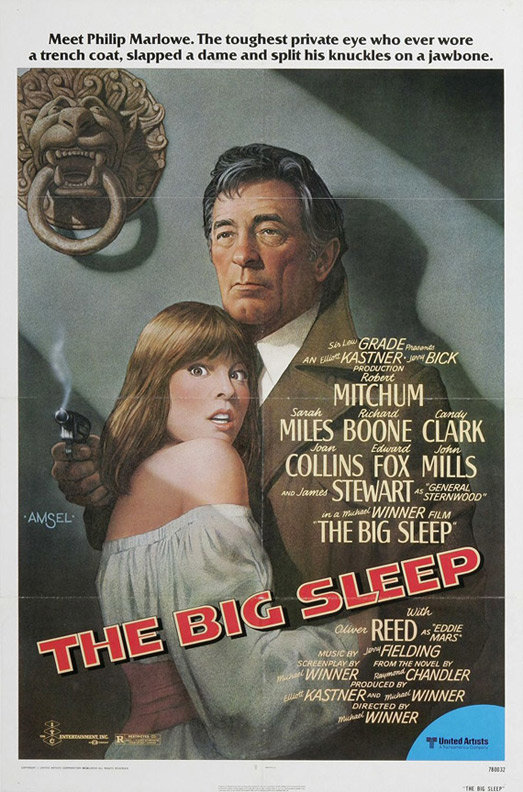 You can catch some of John Williams' theme song to The Long Goodbye in the Notebook's first Soundtrack Mix. Thanks to Bob Hunter for the Zuckoff book, and Nadja Tennstedt who inspired this post with her shared love of Elliott Gould (who turned 73 earlier this week).