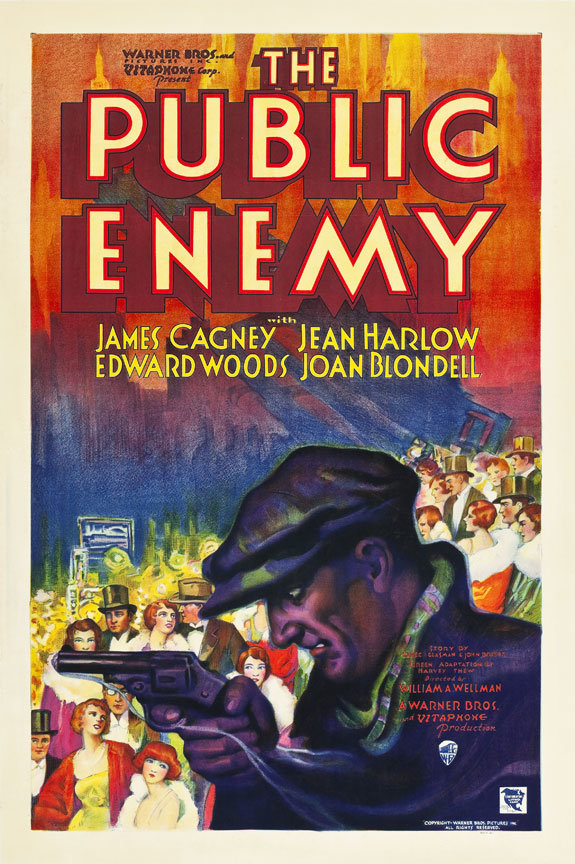 If you think you’ve never seen this poster for William Wellman’s 1931 The Public Enemy (playing tomorrow in Film Forum’s invaluable Wellman retrospective) before, it’s with good reason. Unseen for decades, it was discovered last fall, along with about 30 others posters from the same era, in an attic in Pennsylvania. The Berwick Discovery, as it is known, was described to me by Grey Smith, Director of Heritage Vintage Movie Poster Auctions, who will be auctioning the posters on March 23﻿, as “the most exciting find of my 35 years in the business.”

What is extraordinary about these posters is that they had not been lovingly preserved by a collector. Instead, they had initially been glued one on top of each other for display (one replacing another each time a new release came to town) and then peeled off in one stack. While most posters would have been thrown out at that point, these were saved to be stuffed into the walls of an attic for insulation, where they had remained for 80 years. All the posters are from late 1930 or 1931 (making it a treasure trove of early sound/pre-Code publicity) and probably came from a local movie theater (either the Palace, the Temple﻿, or the Strand—now the struggling Berwick) in the town of Berwick, PA, some 140 miles due west of New York.

The posters, all of which are very rare and some of which were thought completely lost, were discovered when the contents of the house were sold in an estate sale. They had survived in such good condition for a number of reasons. First of all, a movie theater in the early 1930s would have used a water-soluble wallpaper paste to put up the posters, so it was possible, even eight decades later, to steam them apart with no damage to the paper. And Smith thinks that the cool climate of Pennsylvania may have helped, as well as the temperature in the attic itself. According to Smith, the colors on the posters are “astoundingly bright.”

In the photos below you can see the process by which the Public Enemy one-sheet was recovered by Smith and his assistant Bruce Carteron. It had been pasted directly on top of a poster for Sternberg’s Dishonored. (Dishonored was released nationally on April 4, 1931 and Public Enemy was released on April 23, so that would make sense, though of course exactly when either film reached Berwick is unknown).﻿ Smith writes on the auction house’s website that “separating the posters was like removing wallpaper. After carefully moistening the top layer, steam was used to melt the glue and gently remove one poster from another. Each new layer that came up revealed new and exciting treasures beyond anyone’s wildest expectations.” 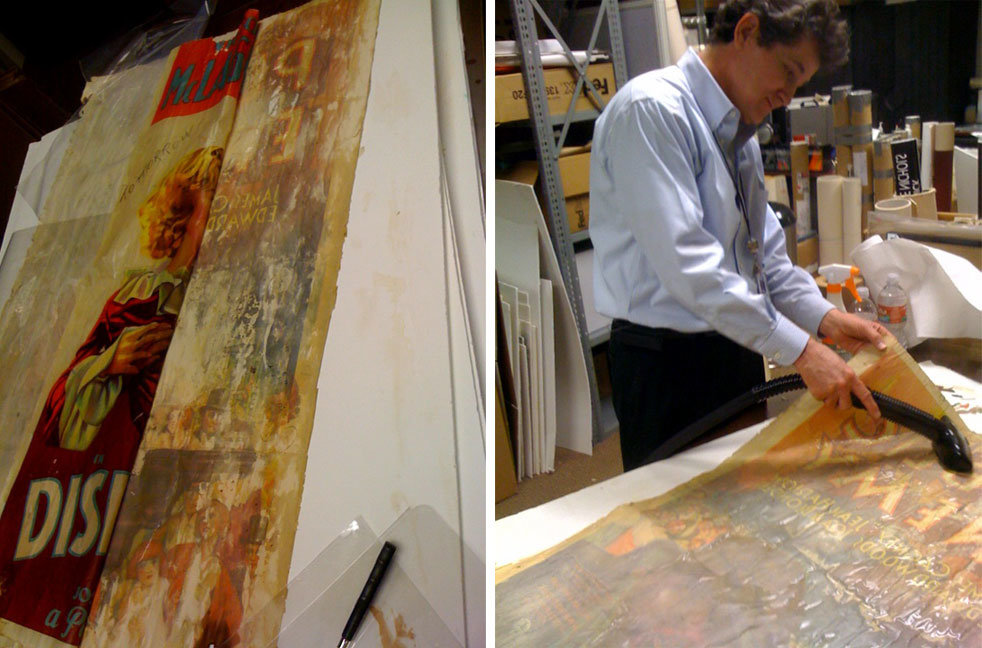 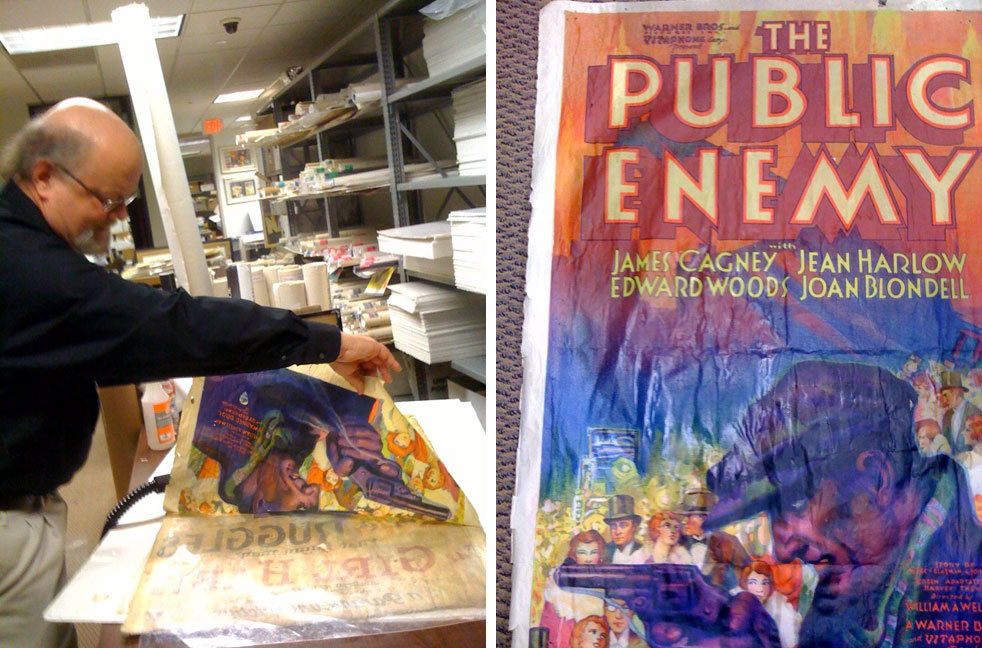 The Public Enemy poster, in which the main subject doesn’t even resemble James Cagney (and maybe isn’t intended to), is a “B-style” design which may have only been seen in the intervening years as the faded cover of a photoplay book. The more famous design is the “A-style” poster which was also part of the Berwick Discovery, but although less colorful window cards of this design have been seen before, the glorious one-sheet has not. Smith writes that “these posters represent some of the rarest, most sought after ‘holy grails’ in our hobby. The Style A Public Enemy, picturing Cagney and Harlow, is particularly stunning, and neither style has ever been offered to the collecting public. ” 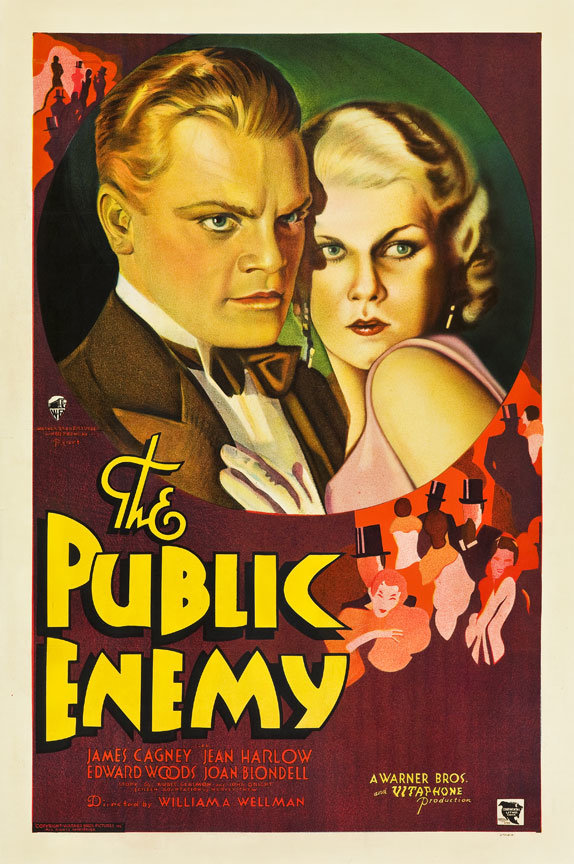 The big-ticket items in the Berwick auction will no doubt be posters for the most famous titles such as Dracula, Little Ceasar (one of only two known copies), Cimarron and the 1931 Maltese Falcon (the only known copy in existence). There is also a very rare John Ford poster for The Seas Beneath, and an early Barbara Stanwyck pre-Coder Ten Cents a Dance. But two of my very favorite posters in the discovery, in terms of pure aesthetics, are those for Rouben Mamoulian’s City Streets and the little known The Lady Who Dared. 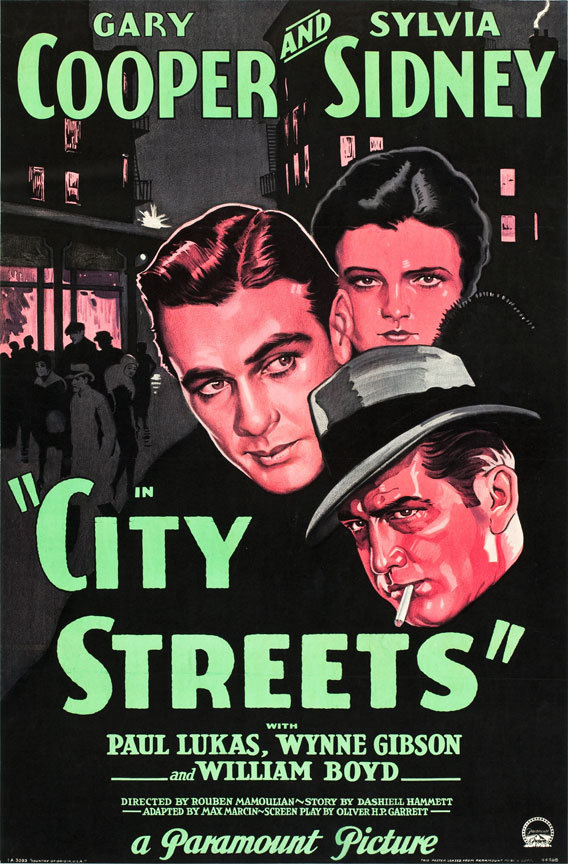 City Streets is not completely rare—Heritage has sold a few copies in the past, always for thousands of dollars—but it is a magnificent example of the borderless “full-bleed” style that was highly unusual at the time but which Paramount experimented with in the early 30s (see also Dishonored below). The ravishing, blood-red Lady Who Dared poster, on the other hand, has not been seen for decades. 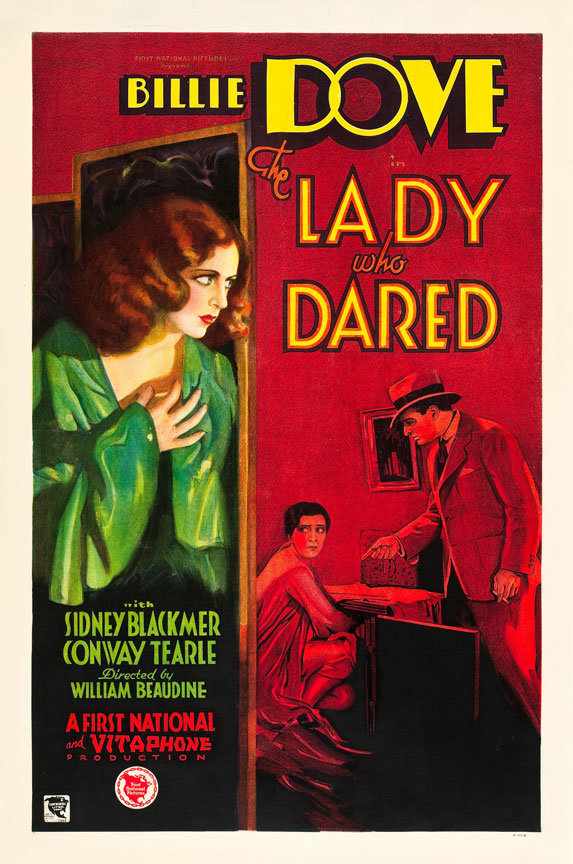 According to Heritage, The Lady Who Dared “was intended as a ‘comeback’ vehicle for silent film starlet Billie Dove, whose popularity at the height of her career rivaled that of Mary Pickford, Marion Davies and Clara Bow. Originally a teen model, she was discovered by Flo Ziegfeld, and soon gained a spot in his famous Ziegfeld Follies Revue. In 1926, she appeared opposite Douglas Fairbanks Sr. in The Black Pirate, and starred in The American Beauty in 1927. Dove shared a three year relationship with billionaire Howard Hughes, and was an accomplished poet, pilot and painter. In 1932, while still popular with movie-going audiences, Dove retired, never to return to the screen save but for a brief cameo in 1962’s Diamond Head. She passed away in 1997.”

Also interesting is that there are a number of doubles in the Berwick collection: two distinct poster designs for the same film. The fact that A and B styles for the same film showed up in the same batch of posters proves that they must have been exhibited side-by-side.

Many thanks to Grey Smith and Heritage Auctions. If you’re feeling flush you may place your bids starting March 1st.