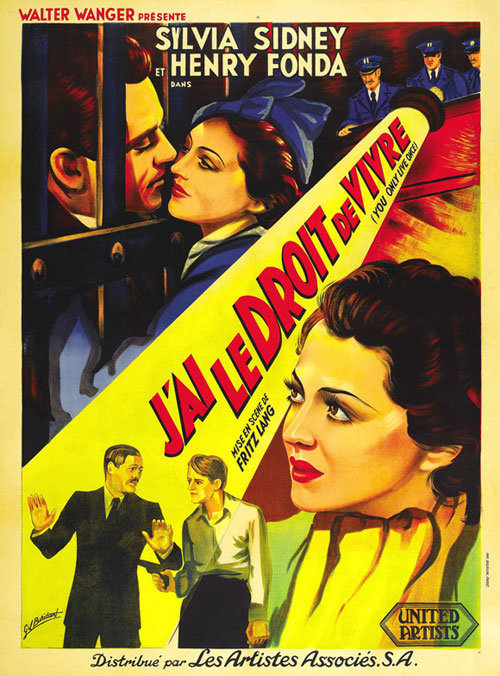 One of the downsides of going to the Rotterdam Film Festival (more on which next week) was having to miss a whole week of Film Forum’s essential “Fritz Lang in Hollywood” retrospective which continues through February 10th. To search through Lang’s American posters (and the foreign posters for his American films) is to skulk through a world of fisted revolvers, prison cell bars, street corner shadows, knives, nooses, and dames in various stages of manhandled distress; a world of heightened emotions and febrile desperation with barely a smile to be seen.

While the foreign posters are often the most striking (like the French poster, above, for one of my very favorite American Langs, You Only Live Once), what many of the original American posters have going for them are their lurid taglines which up the ante of Langian doom another notch or two. Rancho Notorious: “Where anything goes ...for a price!”; The Big Heat:“Somebody’s going to pay...because he forgot to kill me....”; Human Desire: “She was born to be bad... to be kissed... to make trouble!”; Scarlet Street:“They called her Lazylegs... and the things she did to men ended only one way – in murder!” Or my favorite: “Ask Mother what sins are committed WHILE THE CITY SLEEPS.”

Even better are the wordier invocations to the audience. Fury is “Drama that stuns like the blow of a blackjack...because it could happen to any one of of you. IT DID HAPPEN TO THESE TWO! Innocent of any crime, they were the victims of mob violence; two lovers tossed into the inferno of men’s maddest passions. And then he planned the amazing revenge that made strong men scream for pity and a city hang its head in shame!” Or The Woman in the Window: “A too-beautiful woman, a too-carefree man—and an evening of gay flirtation shifting madly into a panic of guilt and fear and crimson MURDER... THAT'S EXCITEMENT FOR YOU!” Indeed it is.

Below are the most visually interesting posters I’ve found for Lang’s American films. Those that might not be immediately recognizable are the Spanish Blue Gardenia, (Gardenia Azul) the French Beyond a Reasonable Doubt (Invraisemblable vérité); both Spanish and Swedish Scarlet Streets (the wonderfully titled Perversidad and Kvinna i Rött), the Spanish and Italian The Big Heat (Los Sobornados and Il Grande Caldo), a French Cloak and Dagger (Cape et Poignard), a Swedish Woman in the Window (Kvinnan i Fönstret), a German Human Desire (Lebensgier), an Italian Cloak and Dagger (Maschere e Pugnali), a Spanish Rancho Notorious (Encubridora), an Italian Scarlet Street (La Strada Scarlatta), a French Human Desire (Désirs humains), a Danish Western Union (somewhat of an anomaly in this collection but too good not to include), and a French Clash by Night (Le demon s’eveille la nuit).