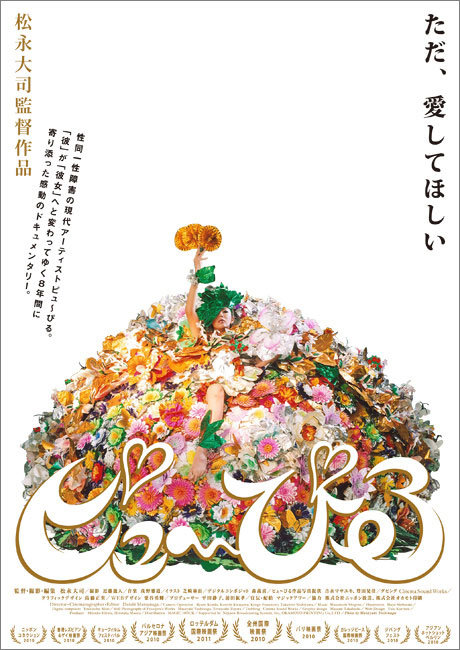 Collecting my favorite posters from this year’s International Film Festival Rotterdam, one thing struck me: that I hadn’t actually managed to see any of the films these posters were advertising. With almost 250 features and over 350 shorts on offer, that wasn’t that surprising, but for that reason I can’t really tell you how well any of them encapsulated their subject. (One exception was the poster for Paddy Considine’s Tyrannosaur, a film I did see and liked a lot, which had a dark, brooding image of Peter Mullan that reminded me of a Pedro Costa film, but I haven't been able to find a copy of it anywhere). Poster-wise, pickings were slimmer than last year (the same could be said of the films) but there were some standouts. My favorite was this gorgeous piece of flowery minimalism, above, for the documentary Pyuupiru 2001-2008, a portrait of the Japanese transexual artist. Minimalism seems to be the rule for most of my favorite posters, most strikingly for Aitá, below left, a feature-length study of an old Basque house. Other favorites, below, were the Argentinian The Winter of the Odd Ones Out, China’s The Old Donkey, the Hong Kong feature Merry-Go-Round, the Singaporean/Serbian Water Hands, the Chilean Lucia, the Korean Tiger Competition entry Bleak Night, and the Canadian head-trip You Are Here. And not to forget the Thai prize-winner Eternity, which I featured a few weeks ago.