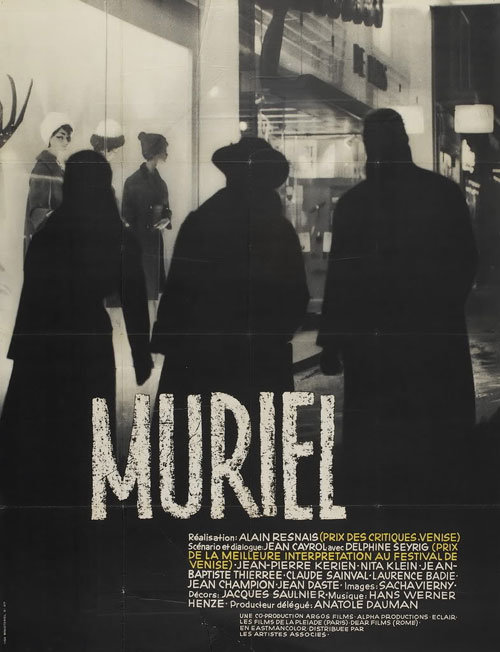 A year or so ago, while writing about the brilliant poster for Alain Resnais’s most recent film, Wild Grass, I was a little disparaging of other recent Resnais posters with their wacky ensemble montages. Go further back in Resnais' filmography, however, and there are some truly exceptional designs. The newly reopened Museum of the Moving Image is currently in the middle of “the most complete retrospective of Resnais’s films ever presented in New York,” which is reason enough to look back at some of this work.

Resnais’ first three features, Hiroshima, mon amour (1959), Last Year at Marienbad (1961) and Muriel (1963), groundbreaking masterpieces all, have inevitably inspired the most inventive and varied work. The stunning French grande for Muriel, above, is one of my favorites. Having not seen the film in a while I can’t tell if this is an unadulterated still from the film or not, but the spectral image is perfect for a film about revenants. It was a daring distributor who greenlit a poster for a film starring the gorgeous Delphine Seyrig that didn’t feature her face, but by 1963 Resnais’ reputation already rested on his avant-gardism and that may have been his major selling point. Seyrig appears, but only just, in two reissue posters for Muriel and Marienbad by the great Hans Hillmann, below. The German, Belgian and Polish posters for Marienbad that follow, which have almost nothing in common visually except Seyrig’s silhouette, are a testament to the varied interpretations inspired by Resnais’ cryptic parlour game. Hiroshima, mon amour has inspired almost as many variations (below are Polish, Swedish and Romanian designs) though all of them seem to center on an embrace. The Polish design, with a photograph torn into a mushroom cloud, is especially evocative.

The pickings are slimmer from the next forty years or more of Resnais’ work (though the work itself has remained as restlessly inventive as ever) but there are some standouts: René Ferracci’s hypnotic swirl for Je t’aime, je t’aime (1968); the surrealism of Providence (1977), somewhat reminiscent of the Wild Grass poster; and two very different designs, from Hungary and Korea, for Mon oncle d'Amerique (1980). I’m also quite fond of the matching illustrations by renowned French cartoonist Floc’h for Resnais’s Alan Ayckbourn diptych, Smoking/No Smoking (1993) all five hours of which close out the MoMI retro next Sunday.

Many thanks to Posteritati who have many of these designs, including the two Muriels and the Polish Hiroshima, for sale.