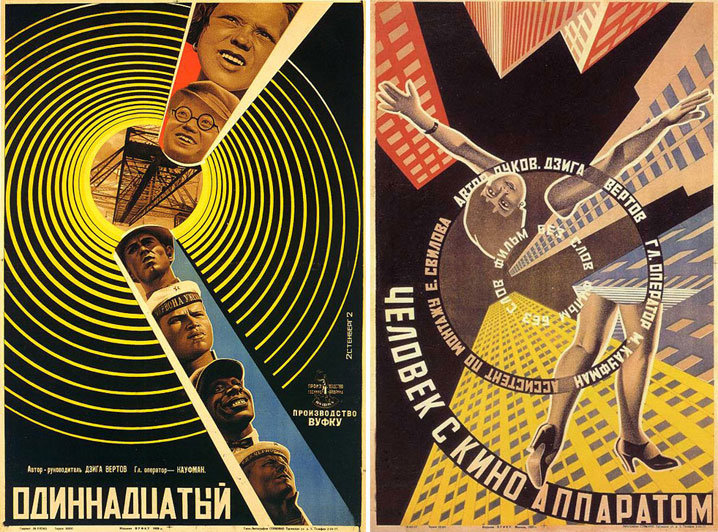 Some of the first movie posters that I ever took seriously, or seriously loved, were Soviet posters of the 1920s. Instantly arresting, intensely colorful and irresistibly dynamic, as well as being rendered more appealingly abstract because of their Cyrillic typography, the best of these posters, like those of the Stenberg Brothers and Alexander Rodchenko, are, it almost goes without saying, among the greatest works of 20th century graphic design. Having said that, I haven’t really thought about them much lately. The most famous of them have inevitably become so overexposed (pastiched by Shepard Fairey and Franz Ferdinand, sold on t-shirts on Soho trestle tables, printed on mugs and aprons...), and their genius a given, that they've become like the Citizen Kane of movie posters, unassailably great and thus rarely discussed.

But the Dziga Vertov retrospective, starting today at the Museum of Modern Art, nudged me to look at some of these posters again and remember just how special they are. As far as I can tell, posters only exist for five of Dziga Vertov's features, all from his peak period from 1924 to 1930. Since the posters very much mirror the films themselves in their revolutionary invention and rule-busting wit, I would love to see the poster for Vertov's Stalin-era Lullaby from 1937 and see how much poster design had also been straight-jacketed by socialist realism.

Plenty has been written about Vertov elsewhere (and collected on MUBI here) that I have nothing to add about the great spinning top of Russian Cinema himself, but here are the posters in chronological order: 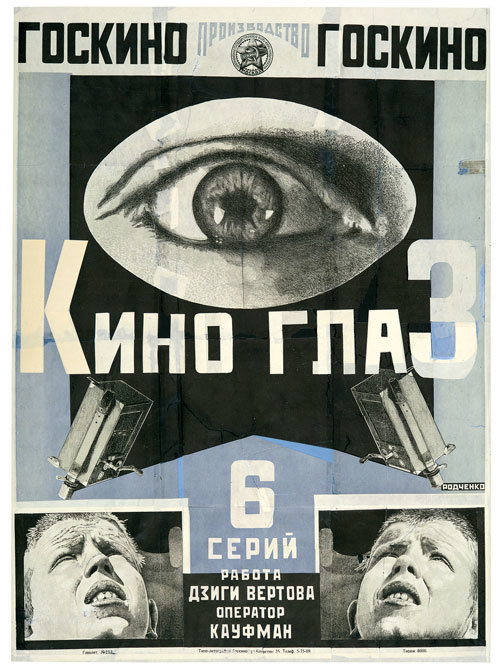 Designed by the great artist and activist Alexander Rodchenko, this poster for Vertov's first film is one of the canonical works of Soviet Graphic Design. The concept of the eye (especially the mechanical eye) is paramount in Vertov’s work and reappears in a number of his posters. 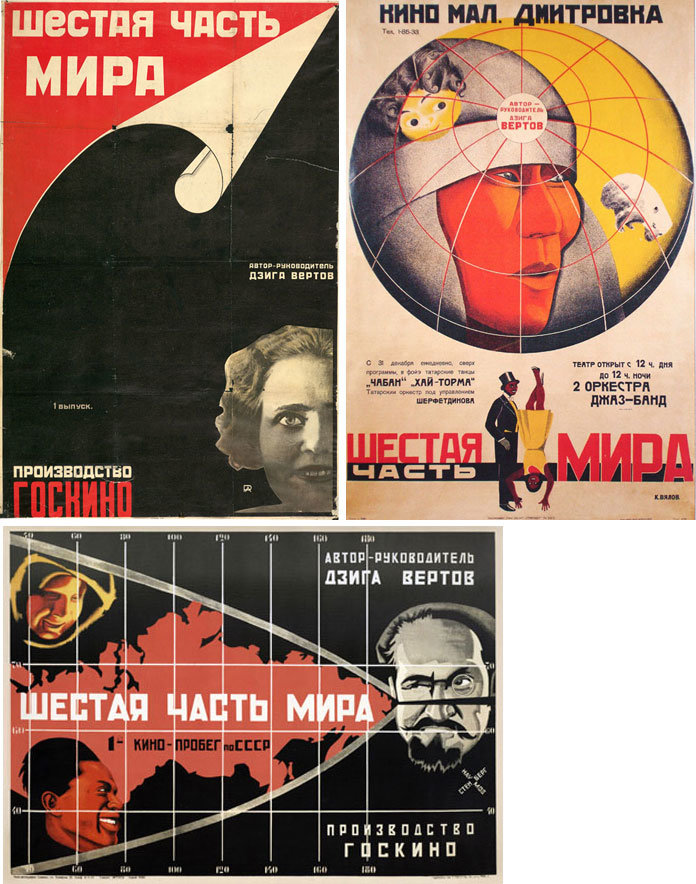 Three very different posters for this film which was commissioned to display the beauty and achievements of one sixth of the world to the other five-sixths. Rodchenko's design (top left) has a trompe l'oeil poster peeling away to show that one sixth of the world is red (and, by implication, more to follow). The second design, provenance unknown, is very curious, especially with the two incongrous jazz-era figures at the bottom (I wonder if it was for a double-bill of films; if anyone can read the poster please let me know). The third design, bottom, is by the incomparable Stenberg Brothers (more on whom in a later post) with Alexander Naumov. 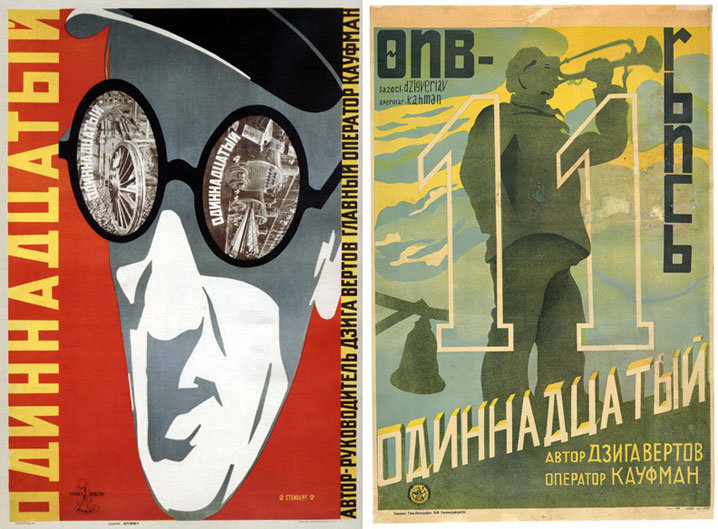 The Stenbergs designed two posters for this film celebrating the eleventh anniversary of the Russian Revolution: the one at the top left of this article with its hypnotic yellow concentric circles (which I blatantly ripped off for my own poster for the documentary Zizek!) and the one above left which used the face of of Vertov’s friend and patron Michail Kol'cov. The third poster, above right, is from Uzbekistan. 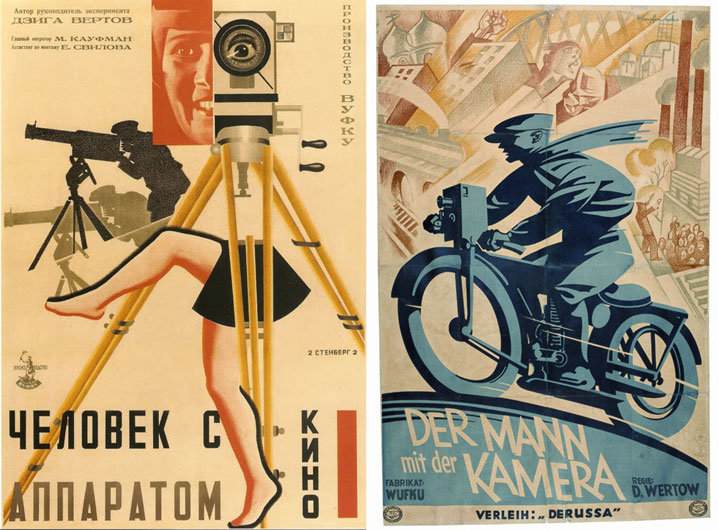 Again the Stenbergs designed two posters for Vertov's most famous film. Their poster at the top right of this article, with its spiralling text, its dizzying urban perspective and its fragmented dancer, could, to my mind, and despite its ubiquity, lay claim to being the greatest movie poster of all time. Their other design, above left, concentrates more on the film’s main character, the camera itself (note the eye again) than on the city symphony it describes. The third poster, above right, is a German design by the artist Sachs Kupfer, in which what J. Hoberman so perfectly described as the film’s “whirligig visual ruckus” is conveyed by the world flying by the motorcyle-mounted camera. 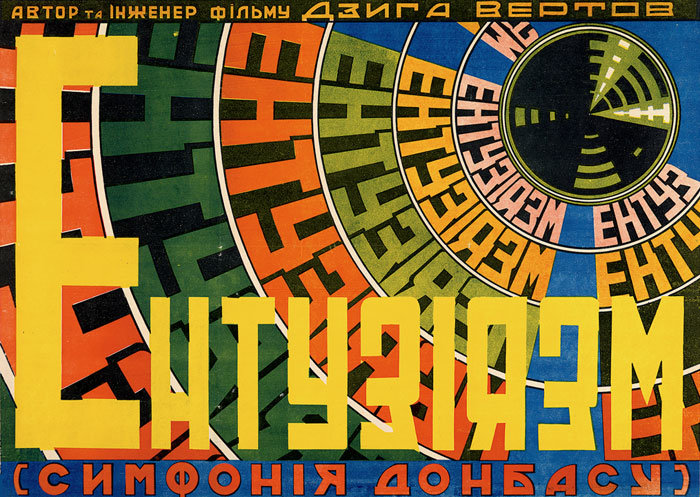 Enthusiasm: Symphony of the Donbass (1930)

Vertov's first sound film, an experimental symphony of sound effects, is brilliantly conveyed in this uncredited poster in which type stands in for reverberating sound.

The book is available for purchase for European readers here and for American readers here.  More resources on Dziga Vertov from the Austrian Film Museum can be found at their Online Vertov Collection resource, here.

From April 15 - June 4, 2011 New York's Museum of Modern Art is showing a large retrospective on the work of Dziga Vertov.