Above:  "Don't call me 'The Connoisseur;' call me Chubsy-Ubsy!": Kenny in Soderbergh's The Girlfriend Experience.

Aug 15, 2008
Late afternoon. A now-unemployed film critic, I’ve been freelancing since May, which means on weekday afternoons I have little to do besides hang in my Brooklyn home and wind myself up reading right-wing political websites.

“What the fuck is up?” It’s my buddy, Brian Koppelman. He and partner David Levien, also a buddy, are behind the screenplays of Rounders, Runaway Jury, Ocean’s 13, and a few other big pictures they’re not credited on and maybe don’t wanna be credited on.

“So listen, we’ve got this part in Girlfriend Experience that we think would be perfect for you.”

Girlfriend Experience is something they’ve been working on with their Ocean’s 13 director, the esteemed and Oscar-winning Steven Soderbergh, since at least May of last year. It’ll be the second of Soderbergh’s “digital films”—low-budget features released in theaters, on DVD, and on Pay-per-view the same day. His first such picture was the precise, low-key small-town murder tale Bubble, which didn’t really pop, business-wise. Girlfriend Experience seems a more commercial proposition, as it’s about the world of high-priced, specialty escorts (the title refers to a longer-than-usual session in which the client gets fake love as well as real sex). Also, the film’s lead actress is a young, beautiful and very game porn star named Sasha Grey, who’s been cast for some time.

“This character, he’s like the Harry Knowles of internet escort reviewers.”

Harry Knowles, if you don’t know, is famous for founding Aint It Cool News, a movie fan boy website of large popularity and no small industry influence. Knowles (and I hope he won't mind me saying this) is also, as Kyle on South Park would put it, a great big fat fuck. I am, hence, slightly put off.

“You know, dude, I understand that I’ve let myself go since I got married, but last time I looked Knowles was so huge he needed one of those old-guy scooter things to get around in.”

“Well, sounds interesting. Not as if I’ve got anything more earthshaking going on. But, you know, my wife is actually a real, trained actress…”

“This is a completely different deal. It’s all non-professional actors, just like Bubble was.”

When my wife comes home from her day job, I apprise her of the offer. She’s thrilled. “Are you kidding? You’d be crazy not to do it!”

A word, here, on my own acting career: Its major triumph was in my junior year of high school, playing The Silent King in Once Upon A Mattress, at Jefferson Township High, in 1976. So strongly did I prevail that I was considered pretty much a shoo-in for the lead role in Jefferson’s 1977 dramatic offering, Dracula. But no. Even before auditions were announced, the drama coach informed me that I would not be getting the part, because, as he put it, I “lacked sex appeal.” Which is a heckuva thing for an adult to say to any 17-year-old male, when you think about it. To add insult to injury, he handed the role to an individual even more awkward and gawky than myself. Who, not to make a bad pun or anything, sucked. And I was left to end my scholastic acting career in Jefferson’s second production of ’77, The Sound of Music, in the role of Uncle Max, which anyone can tell you is the most nothing part in the history of The American Musical Theater. Well. Now I would show that drama coach. 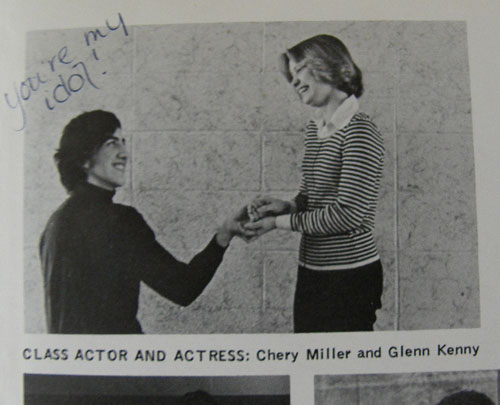 Above: scenes from an obscure career: Kenny as The Silent King in Jefferson Township High School's production of Once Upon A Mattress, top; above, the 1977 yearbook honor he recieved on the strength of that sole performance.

September 29
I’m in Manhattan this morning, taking in a New York Film Festival screening of, as it happens, Soderbergh’s latest film, Che, a four-hour-plus biopic of the iconic revolutionary. During the hour-long lunch intermission, I get a call from a Soderbergh surrogate. As I haven’t yet seen anything resembling a script, I’m not surprised to be told that I’ll mostly be improvising my part. I shoot on two different days. The first is October 10, doing a phone call wherein I make an appointment with the escort played by Ms. Grey. I won’t be on camera, but my voice will be recorded.

“Then on October 20, you’ll be in Brooklyn, for your sex scene.”

Off the phone, I tell the two friends I was lunching with (both fellow film bloggers), that I apparently have a sex scene in the film. They laugh and laugh.

Later in the day, I call my wife. “Honey,” I ask, in my most tentative, craven voice. “Remember when you were in that play, and you had to, like, make out with that guy…and how good I was about the whole thing?”

“Well, it seems like in this movie I might have to do something similar with Sasha Grey…”

And my wife laughs and laughs.

A couple of days later I call my mother. She laughs and laughs.  “Stop, you’re making me choke.”

I call my dad. He merely chuckles. “Your mother’s probably saying novenas for you right now.” It occurs to me that this sort of fundamental misapprehension has quite a bit to do with why my parents are no longer married.

The next day, I tell my therapist. She does not laugh. “That’s part of what you pay me for,” she explains.

October 3
I hear from Chris, the picture’s wardrobe guy. I ask, “What’s up with this character?”

“Well there’s not much specific I’m allowed to tell you. I just want to get a sense of what you can bring in terms of clothes and such. I think this guy certainly has a lack of vanity and a certain…disregard for style. He’s not quite up to date…”

I e-mail him a picture of myself taken at Cannes earlier in the year. I’m wearing a rather loud red Rockawear windbreaker and a Silver Surfer t-shirt.

“Perfect. This guy should definitely dress too young for his age.”

I contemplate shooting myself.

October 8
I have lunch with my friend D., a writer who’s also close with Brian and David. “I e-mailed Soderbergh,” he says,  “and asked if I could visit the set some time. I told him any day on which Glenn Kenny remained fully clothed would be fine, and he wrote back ‘Duly noted.’”

We brainstorm a bit on my still-mysterious character. D., as it happens, has one of the most cheerfully depraved imaginations I’ve ever encountered, and he suggests I play the guy as an utter slob who is nonetheless obsessed with the cleanliness of his “girls.” “You should not shower for three days,” he says. I kind of shrug at that, but his subsequent suggestion that I attempt to employ an Everyday Hygiene Item for the inspection of Sasha’s character intrigues me…

Go to My "Girlfriend Experience:" A Set Diary, Part Two