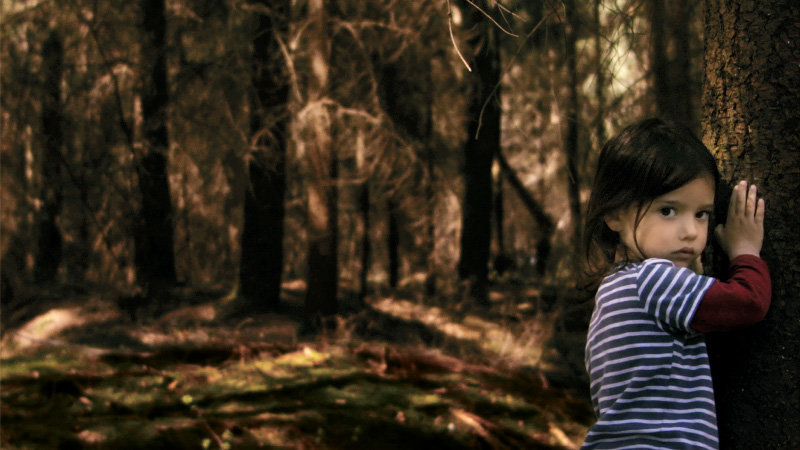 Parents often grow used to hearing their children claim they hate them. The pain of the words becomes duller as it becomes clear that the phrase is nothing more than rebellious, interchangeable invective. What is truly heartrending is the knowledge that your child does not need you. Typically, parents learn this when young adults pack up their things and head off to college or to start their own homes. Valérie Massadian’s debut feature, Nana, inverts this model. The eponymous four year-old girl’s mother disappears from their rural home, but she doesn’t miss a beat. She continues to eat, play and even “reads” herself a bedtime story. The true pleasure of this film lies not merely in its unnerving premise, but in the confidence with which Massadian asserts her place in the history of European pictorial production. The film easily assumes the moniker “painterly,” not because of its predilection for vivid color, but by its adoption of the strategies of artists like Jean-François Millet in its sense of framing and lighting. As the preeminent setting for solitude and independence, the countryside is elevated, by the composition of each shot. to Arcadian heights. Now, however, Arcadia is only aesthetically idealized, inviting more disquieting aspects of human relations back into the world.

Invoking a giant of nineteenth century painting might give the impression that Massadian gives way to staid, if elegant, classicism. It is her interest in time, and the tension of the long take, that prevents her film from appearing as a retreat from humanity’s contemporary philosophical questions. For, what Nana discovers in the course of the film is the sort of solitude that seems almost inherently contradictory to modern life. Massadian nods to this supposed impossibility in returning to the site of Millet’s practice: the homes, fields and forests of the rural worker. We are plunged into the kind of life that is now hidden from view of the world’s large cities. Yet, Nana refuses to engage in nostalgia for a simpler or more natural way of being. The beauty of the land is revealed in such complexly composed shots that the perception of nature is heralded as much as the object of perception. At the same time, the labor required to live in this place is presented as viscerally as possible. Thus, the first scene bears witness to the slaughtering of a pig. At first we hear the farmers complimenting it while the children, Nana among them, play nearby. In a danse macabre, a man toting a strange tool drives the beast around a stake until one of its hind legs are fully bound.  Even if we are unsure of this man’s intentions, the animal seems to know as it squeals and ducks its head away. In the end it has nowhere to go. The handheld device springs a bolt into the pig’s forehead and it drops to the ground. 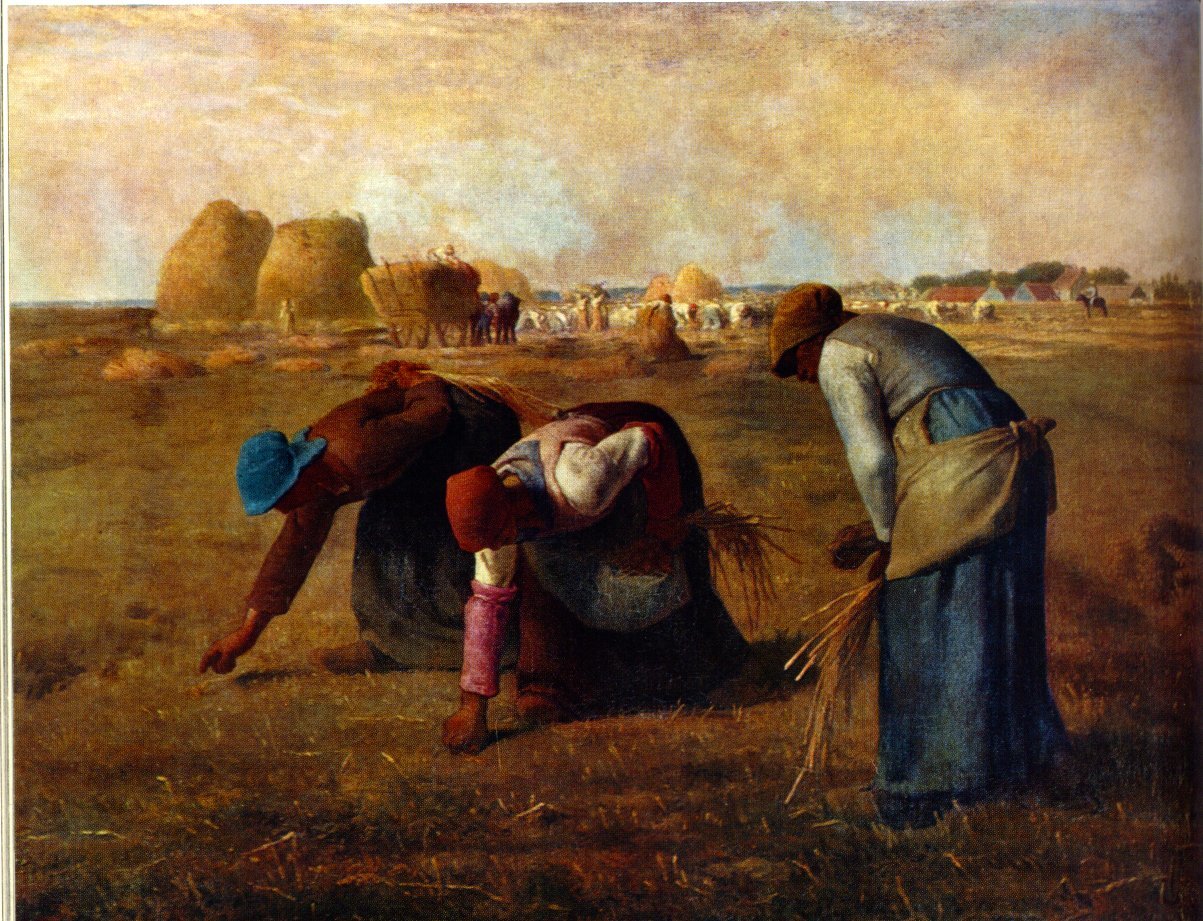 This treatment of the end of the pig’s life is typical of Nana’s beginning, which pays great attention to the relationship between the farmers and nature. We see how they slaughter animals, set snares and gather firewood. All the while, Nana watches intently in preparation for her future. In terms of subject matter, this recalls Millet’s strong focus on elevating the necessities of peasant life into an almost sacralized ritual through their translation from lived experience to frozen moment. His most famous work, The Gleaners, is the best example of this: showing women gathering the grain left over in the fields after the harvest. What was in fact a yearly occurrence meant to prevent the destitute from starving to death becomes a moment for aesthetic contemplation. Millet’s light is scattered, implying a feeble sun competing with the clouds in order to illuminate the task at hand. Nana, likewise, is replete with shots lingering so long that the changing light takes on an ethereal quality.  That we can in fact watch the light move complicates the movie’s relationship to a tradition of still images. We are thrust back into the motion of lived experience, albeit with an intermediary. The elevation of the quotidian aspects of this family’s existence relies upon both the beauty of the frame and the attention demanded by the time spent with each image. We are asked to carefully consider exactly what their labor looks like as it happens.

The focus on the minutiae of Nana’s life and the lives around her is what makes her mother’s disappearance so unnerving. Her absence is a leap into extraordinary circumstances after we have invested so much time in the mundane. Moreover, because we are tethered to a child’s view of the world it is not fully explained. In a film focused on observation, disappearance is taken back to its root as an inability to see a character. That the film returns again and again to specific images framed in the same way—the mother’s home with an incongruous patch of daffodils, the playroom, the sofa—creates an opportunity to form connections in an attempt to solve a mystery that the film is only cursorily interested in pursuing. Its disinterest, or at least Nana’s, further disrupts idealized notions of the “simpler” life, because it takes a relationship that is seemingly intrinsic to a character’s well-being (that of mother and child) and films its dissolution no differently than it does its most intimate moments. Accordingly, we watch Nana’s mother read her a fable about human nature, but after she has left Nana repeats the story to herself and announces to an empty house, “I already know how to read.” 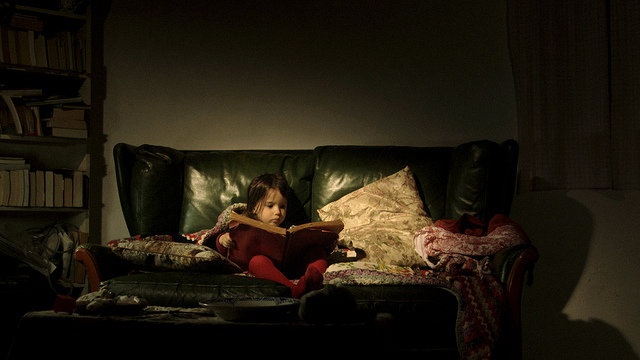 From the film’s earliest moments we are treated to the life that should be romanticized, but bears witness to the modernist fear of the utter ridiculousness of hoping to truly communicate. In a film about a little girl, the first words we hear are, “she’s as cute as can be.” When the image joins its sound, we are shown that the speaker was referring to the pig about to be killed. From the very beginning we learn that language will be deceptive. This is troubling in a quiet movie, since we must attempt to comprehend the characters’ silences at least as often as we do their conversations. The way that Nana’s mother wordlessly refuses to help her daughter learn to use a fork is disconcerting, but no more so than Nana’s penchant for sliding between quoting inappropriate curses and narrating her imaginary adventures. The film sets us up for linguistic deceptions, such that it is not only difficult for the characters to communicate, but it is equally difficult for the audience to read their interactions. It is no wonder, then, that no one remarks upon the mother’s disappearance. Familial relations were already, at their core, impossible. A child’s “I love you” or “I need you” has become as hollow as “I hate you.” In an idealized world, it is better to simply leave these lies unsaid.