Part of our continuing partnership with the online film journal, cléo. Every month, cléo will be presenting a great film to watch on our video on demand platform. In conjunction, we'll be hosting an exclusive article by one of their contributors. This month the journal's managing editor, Julia Cooper, writes on Kelly Reichardt's Old Joy, which is available to watch starting July 31 in the US and Canada.

Sitting cross-legged in his wind-chiming garden, the sound of a gong signals the beginning of Mark’s (Daniel London) meditation practice; inside, his pregnant wife Tanya (Tanya Smith) blends and gulps downs a green smoothie: This is Oregon. Director Kelly Reichardt’s Old Joy (2006) opens with this scene of relative domestic calm. Yet, from the mound of ants that threaten to disturb Mark’s half lotus, to the camera’s quick cut to the noisy blender indoors, there is the sense that anxiety lies not far beyond the oms and juice cleanses. Enter Kurt (Will Oldham), Mark’s longtime friend whose voicemail message suggests the two of them grab some weed and escape to the Cascade Mountains for a night. After a tense conversation with Tanya that discloses a strain in their relationship, Mark packs up the Volvo station wagon with supplies and his dog Lucy and heads out. (Viewers may be familiar with Lucy, who reprises her role as companion and canine neurotic alongside Michelle Williams in Reichardt’s portrait of female homelessness, Wendy and Lucy [2008].) 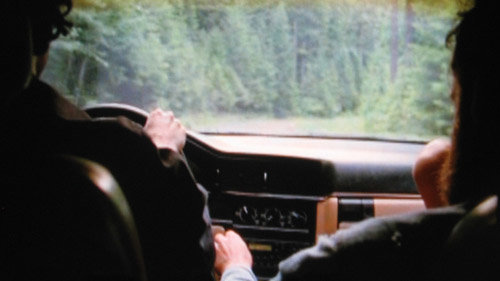 Through long shots and ample silence, Reichardt captures the disquiet of slipping back into familiarity with someone who has become unfamiliar over time. As the men drive North into the evening, the banter between the two old friends is somewhat stilted—they exchange limpid life updates, and Mark hurries over the question of how he feels about his imminent entrance into fatherhood, saying blithely of him and Tanya, “we’ll find a new rhythm.” Mark and Kurt’s conversation eventually finds its own cadence when they turn their attention toward the past, recapping jokes, recalling old names, and remembering favourite shared haunts, but change—which they seem to want to drive directly away from—catches up with them. The vinyl store they once loved has been converted—(New Age) horror of horrors—into a smoothie bar called “Rejuicination,” and both men seem to pause melancholically for a moment on what Kurt declares “the end of an era.” It is, of course, not the end of Sid’s Records they jointly mourn, or the overpriced acai berry shots that have replaced it, but the end of their early twenties. Though Mark has the coordinates of success—a career, a new family, a house, a working car—while Kurt has weed and the free time to smoke it, both men find themselves floundering in this next stage of their lives. What exactly is missing remains unspoken, and that’s likely because it is not an acute lack of something, but an intangible unease with the question of how a person should be.

Not all who wander are lost, said Tolkien, but Mark and Kurt are. Night begins to fall and Kurt’s directions have left them staring pointlessly at a map, quite literally unsure of where to turn next. Backtracking along the tree-lined road, they pull up to a campsite that looks more like a frat house—replete with an old couch and melted beer cans—than a wooded refuge from the city. Kurt speaks to this crossover of the urban and the wild, but with a flippancy that reveals a sense of hopelessness: “there’s trees in the city and garbage in the woods, so what’s the big difference?” he asks a passively listening Mark. (This quick environmental quip seems a harbinger of Reichardt’s latest film Night Moves [2013], which follows three extreme environmentalists as they navigate their radical plans of sabotage and the similarly precarious terrain of their personal relationships.)

The men’s brief getaway continues the next day and they hike (with Lucy in tow) to the hot springs they were searching for the previous night. What follows is a deftly crafted scene of “relaxation” that makes clear just how uncomfortable the need to relax can be. In an age that seems to always be pronouncing the value of a healthy lifestyle, the injunction to be calm, to be present, and to reflect can induce more stress than it relieves. The sound of water on rocks, the a cappella of birds, and the quiet of the men’s secluded spot in the mountains is the stuff of meditation CDs, and Mark does manage to reach a state of calm that eluded him in his earlier backyard attempt. But as soon as he comes into contact with Kurt, his attention is lost, and his body becomes rigid. It is here where the unnameable tensions that have ebbed throughout the film (between Mark and Tanya, Mark and Kurt, each man with himself) culminate. The anxious body of Mark—startled by and recoiling from human touch—gestures to the basic challenge of being at peace in the body and of maintaining that ease when bodies come into contact with one another. Old Joy has us ask not only how should a person be? but also how should we be together?

The book that inspired Reichardt’s film describes itself as the story of two friends on “a pilgrimage of consciousness,” with accompanying photographs depicting bearded men deep in thought, lush landscapes, and “naked visionaries in a wild tableaux.” Reichardt’s adaptation, however, is (thankfully) less cerebral than a metaphysical pilgrimage, and admittedly less wild than a tableau of naked visionaries. But even though Mark and Kurt bear no resemblance to the soothsayer or the savant, together they arguably present a more interesting quest simply because they do not have any answers. They are more perplexed than prophetic about how to reconnect to their friendship and to themselves, and Old Joy looks directly at the uncomfortable moments of introspection, the clichés of soul-searching, and the real question of whether or not the project of personal transformation is worth it.

In Old Joy, Reichardt gives an insightful account of what the residual wearing out of fantasies of success and marriage looks like, and how the ease of relationships can dissipate over time. In a hazy, weed smoked moment of insight, Kurt tells Mark that “sorrow is nothing but worn out joy.” Through these men Reichardt shows us what it can be like to want to come of age a decade too late, and the difficulty of being present in a moment you can’t recognize. But if we are meant to see the men’s worn out joy as a kind of sorrow, as Kurt does, it is a sorrow that also brings these two friends side by side; even though relaxation proves stressful, and calm does not come easily, Old Joy suggests that these discomforts may prove more worthwhile than a solitary enlightenment whose feet never touch the ground.