Air Force screens on October 19 at the Museum of the Moving Image's retrospective, The Complete Howard Hawks. For more of Dan Sallitt's writing on Hawks, go here and here. 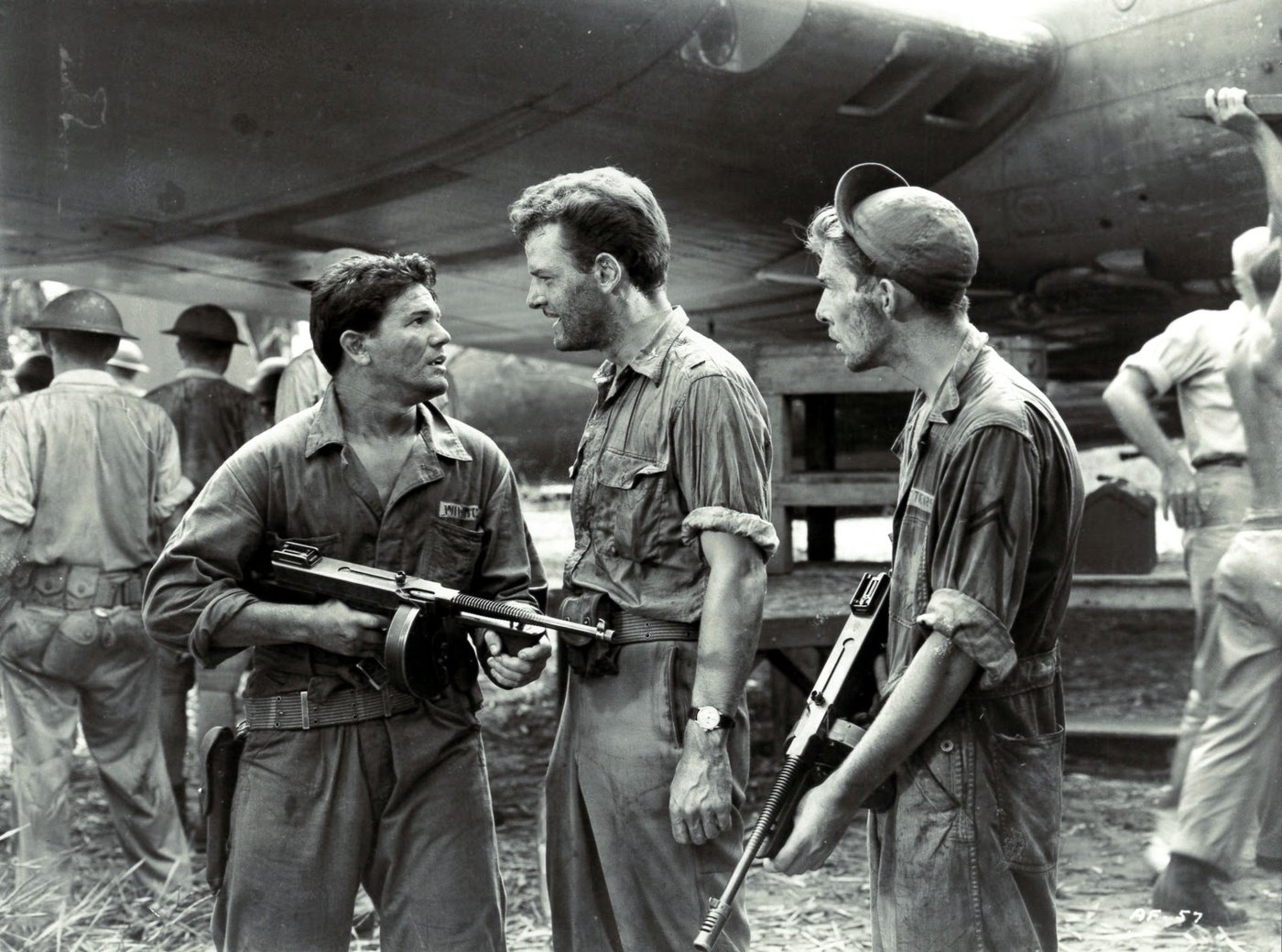 Air Force occupies an unusual place in Howard Hawks' filmography. As a war propaganda film, its subject matter is necessarily tendentious, with an overt message that is not only coercive but also repetitive. Hawks, whose control over his choice of material was quite unusual by Hollywood standards of the time, shows no sign of resisting the project's wartime agenda, and willingly accepts the character stereotyping and up-front ideology that comes with the package: the eager young recruits, the cynic to be converted, the proud parent set up for loss. In addition, Hawks' streak of dark humor combines with the project's built-in tone of righteous vengeance against the Japanese in a way that can strike peacetime audiences as callous.

On the other hand, Hawks is clearly at the top of his game here. Though he did not authorize the released version of the film (which Warner Bros. shipped with a much longer assembly of battle footage at the end than the director wanted), the evidence on screen suggests that he was fully engaged. Certainly Hawks works against the emotionality of the subject matter with scaled-down acting and a brisk, unemphatic rhythm; but no more than he would do with any other genre. So the viewer is presented, not with an attempt to redeem or subvert problematic material, but rather with a work that might as well be considered organic, with its most powerful emotions linked to dubious premises. Modern audiences are likely to wince at gunner George Tobias's gleeful "Fried Jap going down!" in the middle of a fierce air fight. But it's easy to make the connection from such jokes to the potent interlude where John Garfield machine-guns a Japanese pilot trying to leave his burning plane, moments after the pilot relentlessly strafed and killed a helpless American parachutist. Here the thirst for blood, strongly motivated by the rapid pace of the narrative, is presented with some nuance: the execution is unpremeditated, its aftermath stark and joyless, with Garfield given a rare, quiet closeup as he looks down at the fallen parachutist amid the burning plane's smoke. Nothing about the moment undercuts Garfield's angry revenge, but the etiology of the emotion is laid bare in a way that even pacifist viewers may understand.

And it's not hard to free-associate from "Fried Jap going down!" to the heroes' light-hearted non-reaction to the burning, pleading villain in Rio Lobo ("Let him burn." "Don't let him burn till he signs these papers.") or even to the gleeful detonation of Nathan Burdett's fully occupied warehouse in Rio Bravo. A few moments before that warehouse attack, Hawks plays an uncomfortably brutal scene for wild comedy, as three of the five Burdett henchman who try to cross a creek are shotgunned by Stumpy and roll down the creek bank like figures in a first-person shooter game. From which one continues to free-associate to His Girl Friday and Louie's account of ramming into a car full of cops: "They came rolling out like oranges." There is in Hawks a rebellion against empathy that at times can overflow the banks of fictional detachment.

Many of the greatest moments in Hawks' films involve action, but these moments tend to be over quickly: Hawks invariably sets up dramatic situations that would normally motivate an elongation of cinematic time, then surprises us by playing out the action with a speed that sacrifices a full exploitation of the drama. Air Force, however, belongs to a genre that mandates protracted action scenes, and therefore gives one of the best opportunities to examine Hawks' action direction. Interestingly, the editing of the air fights and battle scenes in Air Force is not particularly distinctive: I wouldn't be surprised to learn that Hawks left the editing to the studio. One must look to Hawks' compositions, blocking and camera movements, undemonstrative though they always are, to get a handle on his qualities as an action director.

I'd sort Hawks' ideas for action scenes into three general categories, some of which suggest connections to other aspects of Hawks' work. 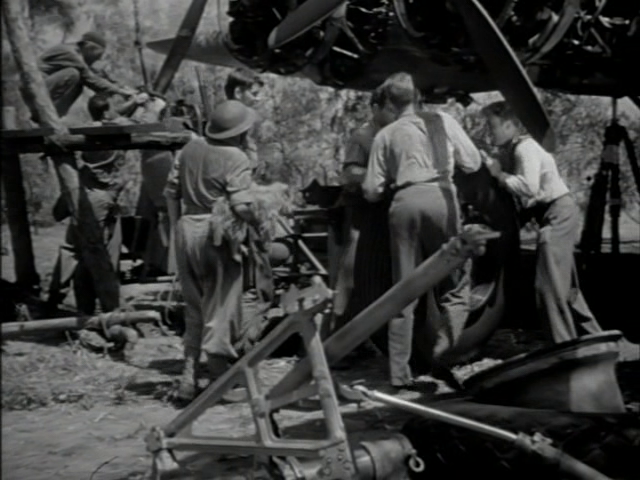 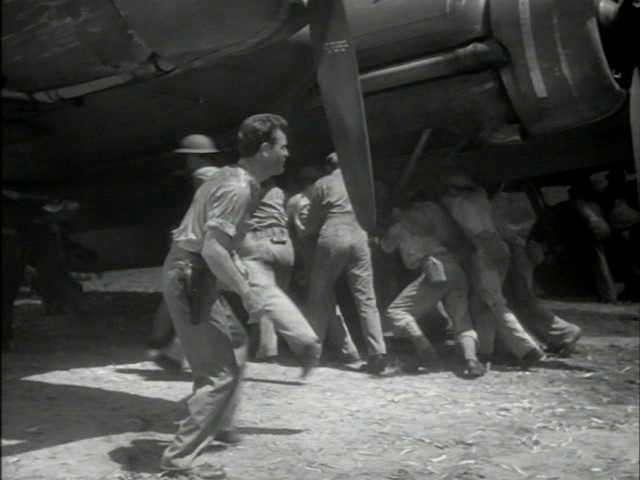 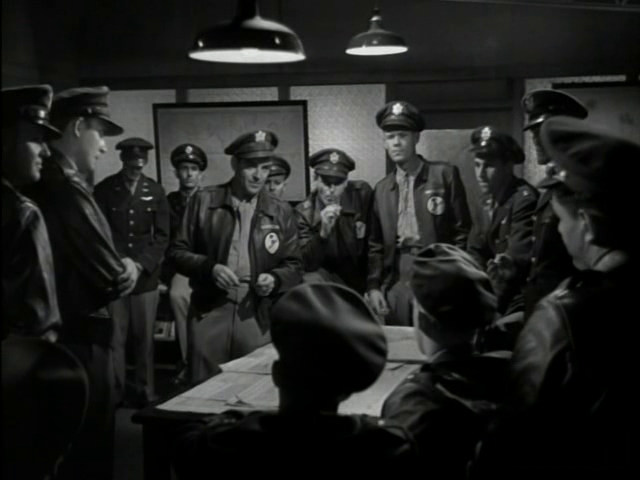 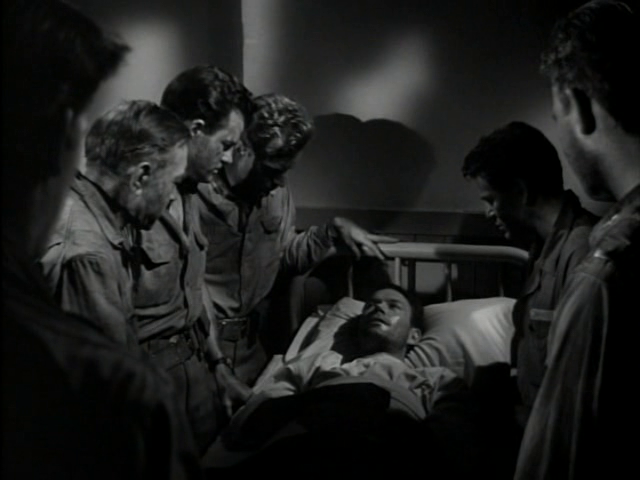 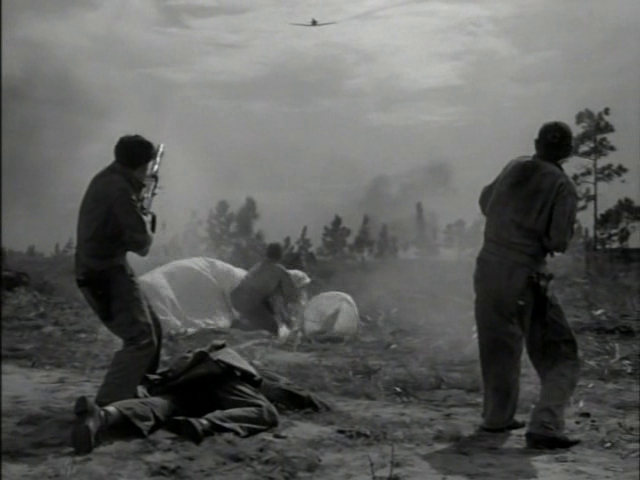 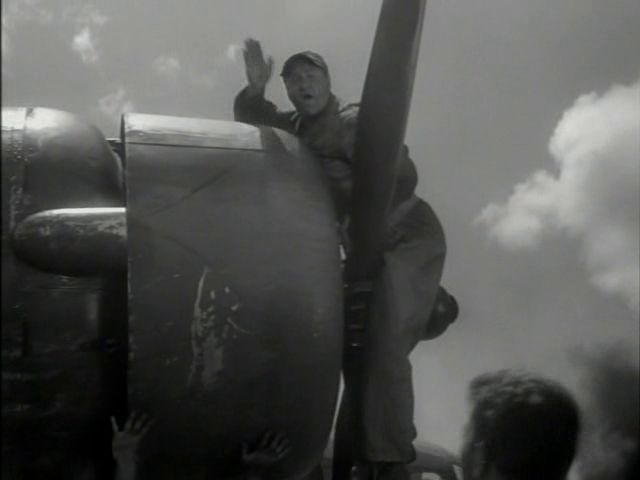 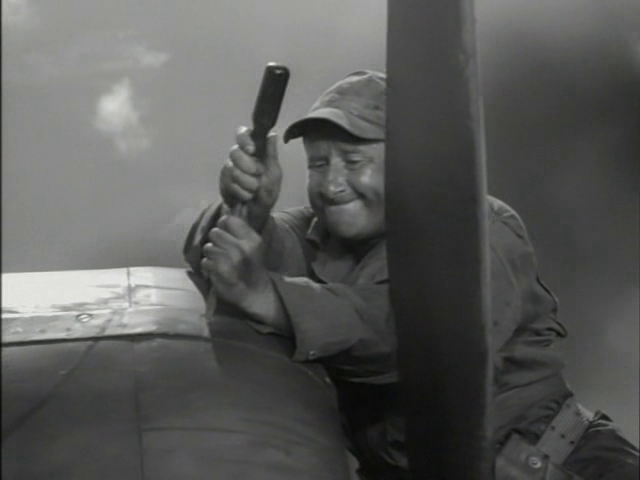 If Hawks seems to regard the propaganda film as a genre suitable for habitation, he is no more reverential toward its conventions than with any other genre. Carey's repeated "Shut up!" to John Garfield during one of the latter's cynical anti-service tirades serves almost the same function as Kenneth Tobey's thrown-away "Get him out of here" as scientist Robert Cornthwaite pleads for the alien's life in The Thing From Another World: in both cases, the genre itself is cast in the role of straight man, deprecated by a more realist and immediate mode of behavior. Similarly, the admirable scenes in which Carey must spring into battle action immediately after hearing of the death of his son amount to nothing less than a revision of genre. Hawks makes a feint at a genre convention – namely, that a minor player's death is merely a note of melancholy to be harmonized with a symphony of other stimulants – then follows it with a modest but firm rejection of the convention in favor of a rewardingly unwieldy mixture of emotions.